Accessibility links
Trump's Economic Nationalism Resonates With Voters, Alarms Some Companies President Trump's plans, a rebuke of the prevailing push toward globalization, may overlook what's under the hood when it comes to manufacturing. 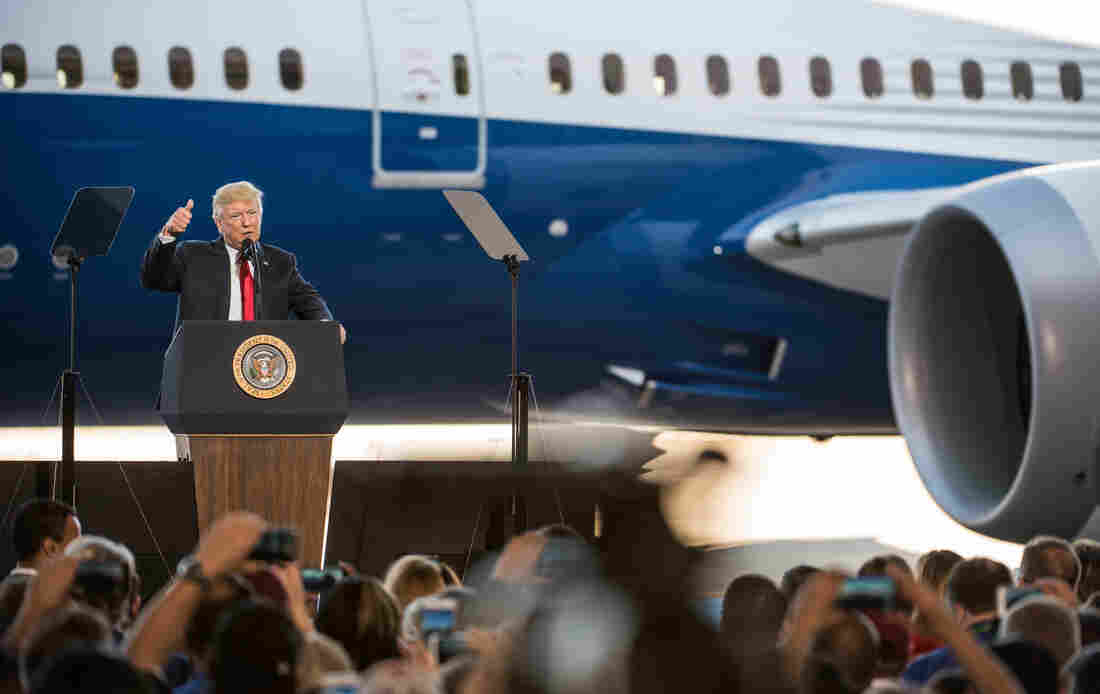 President Trump addresses a crowd during the debut of the new Dreamliner 787 at Boeing's South Carolina facilities on Feb. 17 in North Charleston. Trump uses Boeing as an example of his "America First" policies, but the plane parts come from all over. Sean Rayford/Getty Images hide caption President Trump addresses a crowd during the debut of the new Dreamliner 787 at Boeing's South Carolina facilities on Feb. 17 in North Charleston. Trump uses Boeing as an example of his "America First" policies, but the plane parts come from all over.

President Trump and his advisers have begun putting some red meat on the bones of the president's "America First" agenda.

Trump is expected to talk more about that when he addresses a joint session of Congress on Tuesday night. As with Brexit and other nationalist movements, Trump sees his election as part of a broader rejection of globalization.

"Erasing national borders does not make people safer or more prosperous," Trump told supporters in Melbourne, Fla., this month. "It undermines democracy and trades away prosperity. We're giving it away."

That philosophy not only guides the president's policies on immigration and national security, it is also steering an economic agenda that plays well with many of Trump's most ardent supporters.

"A lot of people here are pro-America and looking to support a president that finally says, 'I'm for you, the working man,'" said rally attendee James Evert. "His No. 1 concern is Americans. Not for all the other people around the world."

But turning nationalistic slogans into practice is easier said than done, as Trump discovered on one of his first days in office. During a discussion of restarting two stalled pipelines, Trump insisted his commerce secretary look for ways to include more American materials.

"It comes from the United States or we're not building it," Trump told an audience of conservative activists last week.

The actual order is not quite so clear-cut. It includes considerable wiggle room if the "buy American" provision turns out to be impractical or runs afoul of international trade rules.

Some people welcome the president's push.

"I thought, it's about time," said Scott Paul, president of the Alliance for American Manufacturing, a partnership between the steelworkers union and domestic steel companies.

Thousands of steel jobs have been lost in recent years, partly as a result of cheap Chinese imports. Paul said those idle steelworkers would be happy to go back to work making pipes. But first, their employers will have to be convinced that Trump's mandate has staying power.

"It's kind of the chicken-and-egg thing," Paul said. "U.S. steelmakers are not going to open up lines to make massive amounts of pipes if they don't think pipes are going to be in demand. But once they know there is going to be a market, this is a product the steel industry will be eager to deliver."

Likewise, Trump has been pressing automakers to locate more assembly plants in the U.S. But that may overlook what's under the hood. Carmaking is a business that increasingly crosses national borders.

Many American automakers rely heavily on imported parts, while many foreign companies employ workers here in the U.S.

"The No. 1 American-made car was the Toyota Camry," said senior editor Kelsey Mays of the website Cars.com, which compiles an annual index of the most "American-made" models.

"That may surprise some people because Toyota obviously isn't based here in the United States. But the Camry has 75 percent domestic content. It's built in Georgetown, Ky., and Lafayette, Ind.," Mays says.

In fact, the five most American-made models on the Cars.com list last year all had Japanese nameplates.

The biggest disconnect between Trump's narrow brand of nationalism and the reality of global supply chains showed up when the president visited a Boeing plant earlier this month to celebrate the rollout of a new 787 Dreamliner.

"This plane, as you know, was built right here in the great state of South Carolina," Trump said. "Our goal as a nation must be to rely less on imports and more on products made here in the U.S.A."

While Boeing is an American company, the Dreamliner is a melting pot. Its fuselage comes from Italy. The wings are from Japan. Passenger doors are built in France. What's more, 85 percent of the planes are sold overseas.

"You've got a plane that's heavily sourced from abroad and overwhelmingly goes to international customers," said aviation consultant Richard Aboulafia of the Teal Group. "This is a poster child for globalization."

Big exporters like Boeing would have a big target on their backs if Trump's protectionist policies end up starting a trade war.

In a way, it's odd that Trump would choose to give an "America First" speech while standing in front of a newly assembled Dreamliner. With its 6,400-mile range, the widebody jet is built to carry people quickly and easily across oceans and between continents. That flight could be bumpy with a new nationalistic president at the controls.