Escaping A World On Fire In 'Exit West'

Escaping A World On Fire In 'Exit West' 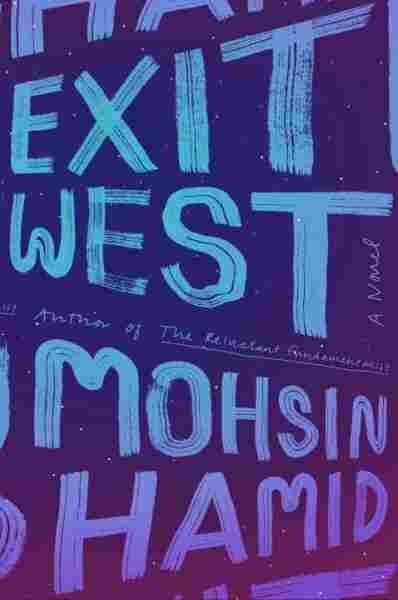 Despite what you may hear from alarmists, it's not easy for refugees to get to the United States — or really anywhere, for that matter. If they're even able to escape their own country, they face constant roadblocks and long waiting lists before they're able to establish themselves, however precariously, in another country. There are no magic doorways they can walk through that will just bring them to another land.

But what if there were? That's the question Mohsin Hamid poses in his haunting new book, Exit West. The fourth novel from the Pakistani-born author is at once a love story, a fable, and a chilling reflection on what it means to be displaced, unable to return home and unwelcome anywhere else.

The novel takes place in modern times — smartphones are mentioned more than once — in an unnamed city "swollen by refugees but still mostly at peace, or at least not yet openly at war." Occasional skirmishes mean the residents are wary, but for the most part, people go about their business — including Saeed and Nadia, two young people who are classmates at a night business school.

The two befriend each other, and start spending time together, sharing meals, listening to music, smoking pot. It doesn't take long for Saeed to fall for the mysterious Nadia, who shuns religion even as she wears a black robe to conceal her body: "Saeed was certain he was in love. Nadia was not certain what exactly she was feeling, but she was certain it had force."

Mohsin Hamid and 'The Reluctant Fundamentalist'

But the situation in their city deteriorates. Tensions between the government and an outside group of religious radicals increase, and soon the rebels have essentially taken over the town, with refugees from the countryside trapped in the crossfire in the city streets. The radicals waste no time dispensing their harsh brand of justice: "The executions moved in waves," Hamid writes, "and once a neighborhood had been purged it could then expect a measure of respite, until someone committed an infraction of some kind, because infractions, although often alleged with a degree of randomness, were invariably punished without mercy."

After someone Saeed loves is killed, he and Nadia start investigating rumors they've heard about mysterious "doors that could take you elsewhere, often to places far away, well removed from this deathtrap of a country." They find a man who promises to escort them to one, and seconds after they step through it, they find themselves on a Greek island with fellow refugees from all over the world. It's a better existence than the one they had in their home country, but they grow restless, going through door after door, from Europe to North America, before they're ready to settle down.

Hamid does an excellent job portraying the relationship between Saeed and Nadia. It's a complicated one — they happened upon each other just before their world caught fire, and the nature of their friendship is fluid, and affected by Saeed's growing need to pray, to make some sense of what has happened to him and his family.

... he captures the feeling of being displaced beautifully — this is the best writing of Hamid's career.

And he captures the feeling of being displaced beautifully — this is the best writing of Hamid's career. The novel is poetic, full of long, flowing sentences. Consider this excerpt about Hamid's increasing religious belief: "When he prayed he touched his parents, who could not otherwise be touched, and he touched a feeling that we are all children who lose our parents, all of us, every man and woman and boy and girl, and we too will all be lost by those who came after us and love us, and this loss unites humanity, unites every human being."

It's hard not to be in awe of writing like that, and Hamid somehow makes it look easy. There's not a wasted word in Exit West; every one is considered carefully. This makes every sentence hit hard — the writing makes it hard to put down, but readers will find themselves going back and savoring each paragraph several times before moving on. He's that good.

It's a breathtaking novel by one of the world's most fascinating young writers, and it arrives at an urgent time. Hamid encourages to us to put ourselves in the shoes of others, even when they've lived lives much harder than anything we've endured. We have nothing in common except the most essential things, the things that make us human — as Hamid writes, "We are all migrants through time."