Accessibility links
Dow Hits 21,000, Trump Touts Stock Market Success, But Many Left Out Of Gains About half of Americans own stock, though most stocks are owned by the wealthiest. For many, a booming stock market does not offer direct benefits. 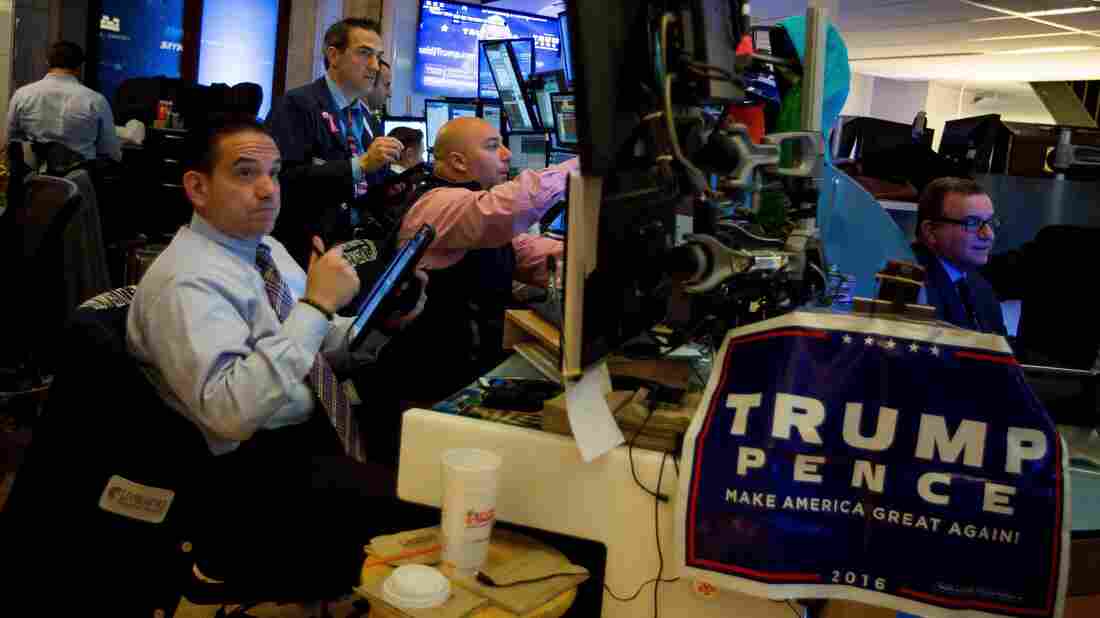 A campaign sign for President Trump and Vice President Pence hangs on a desk while traders work before the opening bell of the New York Stock Exchange the day after the 2016 election. Michael Nagle/Bloomberg via Getty Images hide caption 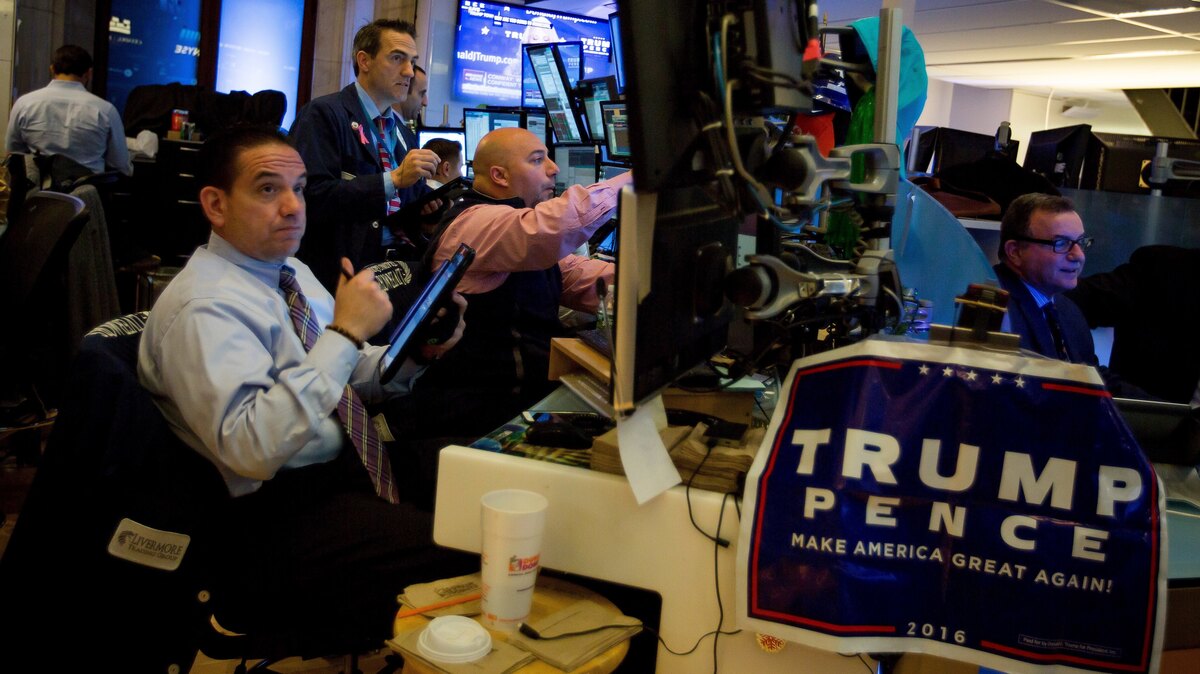 A campaign sign for President Trump and Vice President Pence hangs on a desk while traders work before the opening bell of the New York Stock Exchange the day after the 2016 election.

President Trump likes to tout the booming stock market as evidence that he is already boosting the economy. He bragged about it in his speech to Congress on Tuesday night, and then got more to the point on Wednesday, when the Dow Jones industrial average closed above 21,000 for the first time.

Trump Gets Good Marks From Supporters For Speech, But Can He Move It Forward?

To Trump, this is validation of the business-friendly policies he has pushed thus far. But there's something jarring about Trump's stock market talk as he promises his commitment to the middle class and laments the poverty level: Those stock market gains will overwhelmingly benefit the richest Americans.

Ignore for a second that stock index milestones like Dow 21K are inherently rather arbitrary. The broader point is that stock indexes have recovered nicely since the Great Recession — the S&P 500 (a more comprehensive look at the stock market than the Dow) has more than tripled from its trough in 2009.

However, stock ownership has slipped during that same period. According to Gallup, 52 percent of U.S. adults owned stock in 2016. Since Gallup started measuring this in 1998, that's only the second time ownership has been this low. These figures include ownership of an individual stock, a stock mutual fund or a self-directed 401(k) or IRA.

That means the stock market rally can only directly benefit around half of all Americans — and substantially fewer than it would have a decade ago, when nearly two-thirds of families owned stock.

And that decline was bigger among lower-income Americans, data from the Federal Reserve show. Of the 10 percent of families with the highest income, 92 percent owned stock as of 2013, just above where it had been in 2007. But ownership slipped for people in the bottom half of the income distribution, and to a lesser degree for people who were above the median but below the top 10 percent.

Combine the uneven ownership rates and ownership amounts, and the total inequality in the stock market is astounding. As of 2013, the top 1 percent of households by wealth owned nearly 38 percent of all stock shares, according to research by New York University economist Edward Wolff.

Indeed, nearly all of the stock ownership in the U.S. is concentrated among the richest. According to Wolff's data, the top 20 percent of Americans owned 92 percent of the stocks in 2013.

Put another way: Eighty percent of Americans together owned just 8 percent of all stocks.

Of course, it makes sense that richer people would own more stocks than the rest of Americans, just as they own more of other types of assets, like real estate. But the massive disparities in stock ownership are important for two reasons: One is that when a politician brings up the stock market as a measure of economic success, that success isn't very relevant to many Americans.

Trump isn't alone in mentioning the stock market in his speeches; Obama referenced gains in his 2011, 2013, 2014 and 2015 State of the Union addresses, according to MarketWatch's Jeffry Bartash.

Another reason this kind of information is important is that it doesn't just reflect who has enough disposable income to make some trades; it's about the nation's retirement system. While half of Americans benefit from the stock market (the richest far more than the rest), many lower- and middle-class Americans don't even have the retirement accounts that constitute many middle-class Americans' stock ownership.

More than one-third of Americans working full time have no access through their employers to either pensions or retirement investment accounts like 401(k)s, according to the Pew Charitable Trusts. Many national-level politicians occupy a world where stock ownership is a fact of life. But that's not true for many of the people they represent.

How stocks could benefit non-stock owners

To be fair, non-stock owners could see a potential upside to the improving stock market through what's known as the "wealth effect." The basic idea is that when the stock market improves, wealthier folks feel better about their finances and therefore spend more. That spending drives more economic growth and can help people up and down the income spectrum.

Indeed, former Federal Reserve Chairman Ben Bernanke listed the wealth effect as one argument for his quantitative easing programs. The Fed's accommodative monetary policy after the recession helped goose stock prices, in part by lowering yields on safer assets like Treasury bonds. That sent investors to the stock market to invest. And as Bernanke wrote in 2010, higher stock prices would boost spending, which would "lead to higher incomes and profits that, in a virtuous circle, will further support economic expansion."

That expansion isn't necessarily even, though. Former Dallas Fed President Richard Fisher explained to CNBC in 2016 that the Fed's quantitative easing program boosted the prices of stocks and other assets, but that the economic benefits were limited.

"We were going to have a wealth effect. That was achieved. We made wealthy people wealthier," Fisher said. "But the point is it didn't trickle down."