Accessibility links
At Texas Clinic, 2 Women Explain What Changed Their Minds On Abortion Since the election of Donald Trump, the abortion debate has been ramping up. At one clinic in Texas, two women on opposite sides recently changed their minds about how they view abortion. 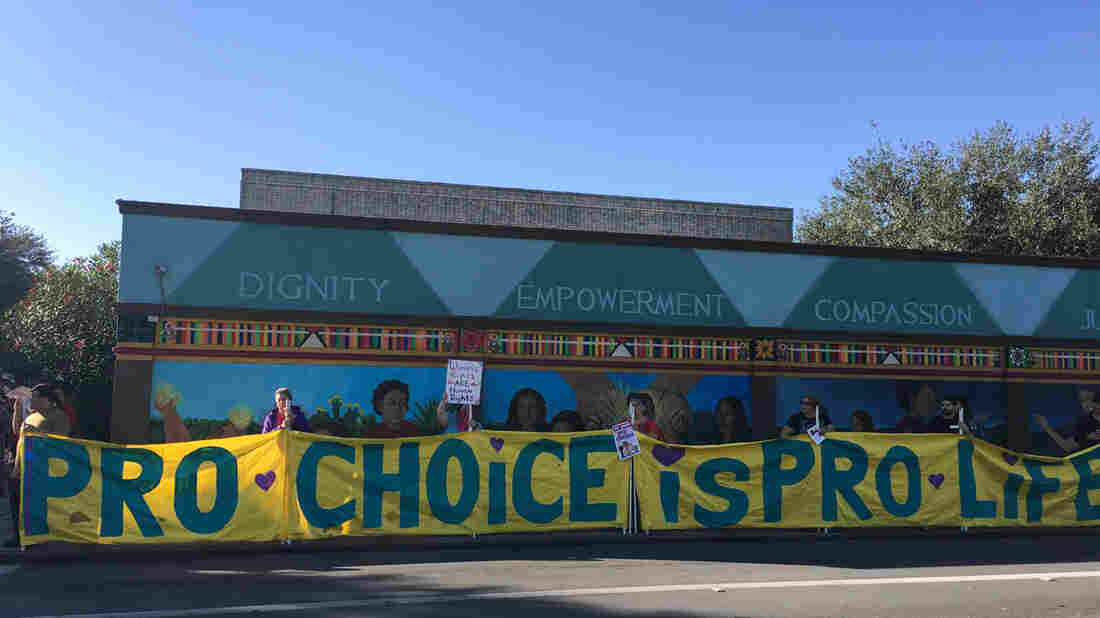 In response to an anti-abortion march in McAllen, Texas, many pro-abortion rights demonstrators encircled the Whole Woman's Health clinic, which is the only abortion provider in the Rio Grande Valley. Courtesy of Laura Molinar hide caption 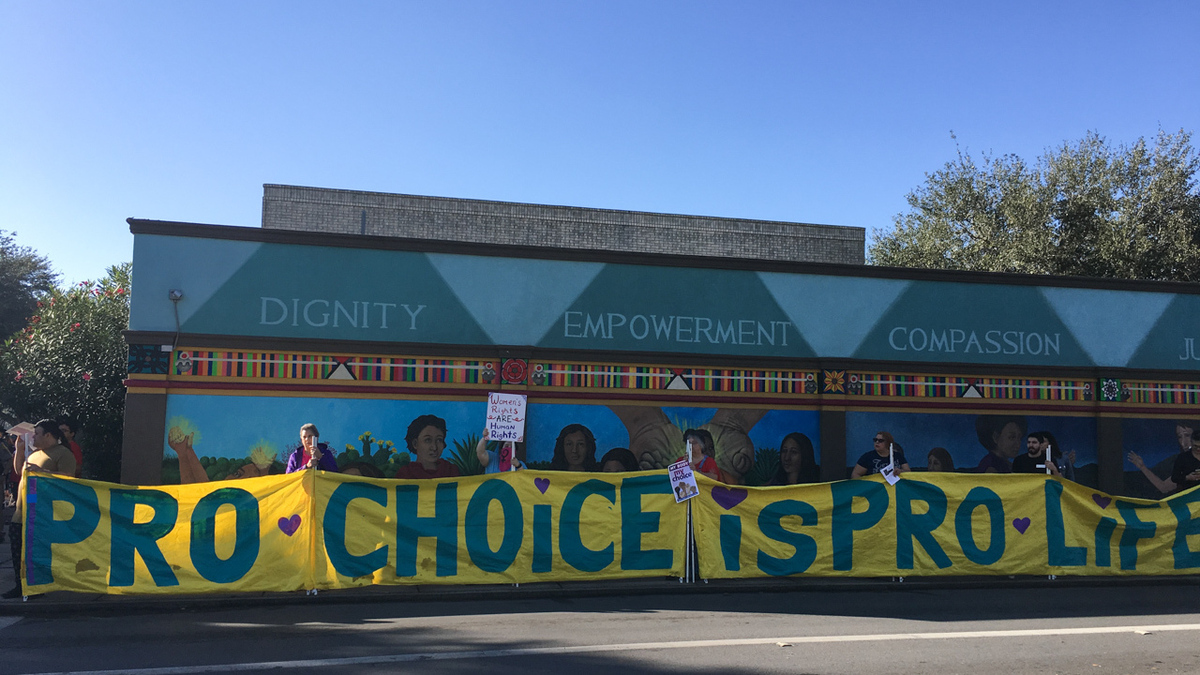 In response to an anti-abortion march in McAllen, Texas, many pro-abortion rights demonstrators encircled the Whole Woman's Health clinic, which is the only abortion provider in the Rio Grande Valley.

Since President Trump took office, there's been an upswing in rallies and protests outside clinics that perform abortions.

During the campaign, Trump vowed to try to overturn Roe v. Wade, which has emboldened activists on both sides of the abortion debate. At one abortion clinic in Texas, along the border with Mexico, two young women in opposing camps recently changed their minds about the way they feel and think about the issue of abortion.

It's midday on a Tuesday, and 32-year-old Mercedes Soto is standing outside the Whole Woman's Health clinic in McAllen, Texas. It's the last remaining abortion clinic in the entire 1,800-square-mile region known as the Rio Grande Valley.

At A Virginia Planned Parenthood Clinic, Practitioners Worry For Their Patients

Soto is demonstrating with fellow anti-abortion protesters who call themselves prayer warriors. She doesn't look like the other women praying. She's a lot younger.

The word "misunderstood" is tattooed in cursive on the outside of her arm. Soto says she had a rough childhood. She says she always felt isolated and unloved, so when she turned 18 she left home.

"If you would have looked at me in my old life, you wouldn't have expected anything good," Soto says. "I was in very very bad steps. I turned to drugs as a coping mechanism. I started hanging out with the wrong crew. I joined a gang. I just wanted to belong. I wanted to belong. And I wanted somebody to be there for me." 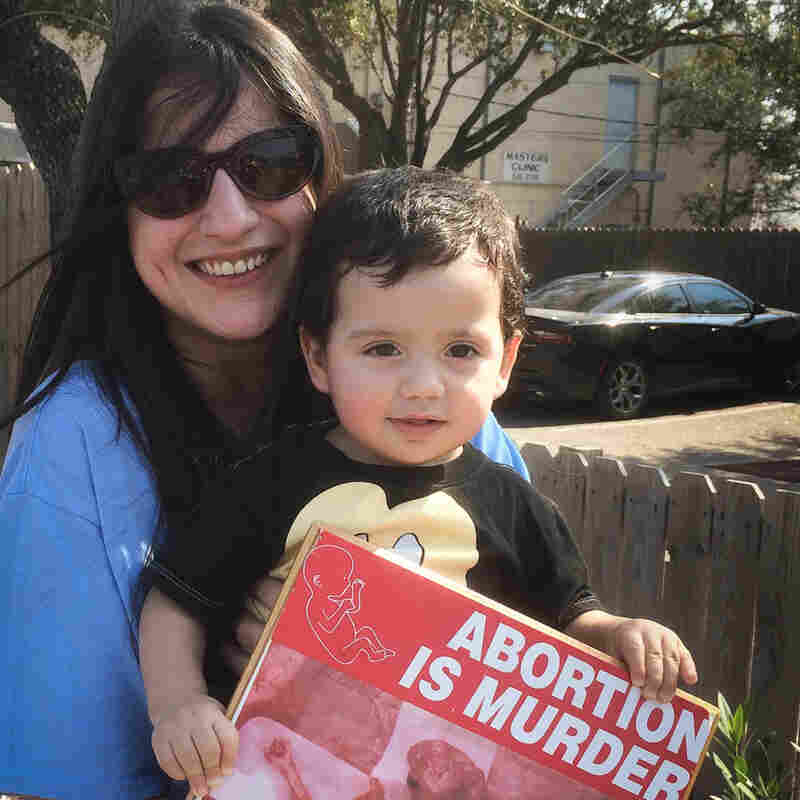 Mercedes Soto says she was considering an abortion the first time she came to the Whole Woman's Health clinic. She decided against the procedure, became an anti-abortion activist, and now protests outside the clinic with her son, Samson. Eli Cantu/Youth Radio hide caption

Then, two years ago she got pregnant. That's when she came to this clinic for the first time, except not as an anti-abortion protester but as a patient.

"I was on the other side," Soto says. "I was contemplating abortion, and I was very headstrong about my abortion."

On her way into the clinic that day, Soto was stopped by a woman, an anti-abortion activist praying outside the clinic.

"She starts telling me I'm beautiful, and I wasn't trying to hear this woman," she says. "I wasn't."

Soto decided not to have an abortion. Now, she is carrying a sign with what looks like a gory fetus and the words "Abortion Is Murder." In her other hand, she is holding an even more persuasive tool — her 1-year-old son, Samson, whom she often brings with her to protest shutting down the McAllen clinic.

In January, hundreds of protesters rallied outside the Whole Woman's Health Clinic. One group was marching against the abortion clinic, and another, smaller group was standing to protect it.

"Seeing all of these women here has just ignited the fire," said 25-year-old Laura Molinar, who traveled more than 230 miles from San Antonio.

Legal Medical Abortions Are Up In Texas, But So Are DIY Pills From Mexico

She held a hand-drawn sign on yellow poster board with the words "Don't Tread On Me" on top. The flag is one you see all over the place in Texas. Only this time, the snake is wrapping around a giant uterus.

"It took me a while to draw this uterus," Molinar joked. "It's not the best."

There used to be another abortion clinic about 35 miles from the one in McAllen, but it closed because of a Texas law known as House Bill 2. HB2 was eventually overturned by the Supreme Court, but many clinics affected by the law never reopened.

For Molinar, these closures would have been celebrated in the church she grew up in.

"As a teenager I was so involved with the Catholic Church, you know, doing praise and worship," Molinar said.

Friends from her church youth group used to pray outside abortion clinics. But last year, the issue became personal when Molinar chose to have an abortion.

"I was faced with making that choice for myself," Molinar said. "And I never thought that that would happen to me until it actually did. I remember feeling so alone, and so scared and unworthy, and I remember telling myself that I will do everything in my power from this point on to help women so that they will never feel like that."

In the Rio Grande Valley, the local Catholic diocese is a major organizer of anti-abortion efforts. The clinic in McAllen has protesters outside its main entrance almost every day. And anti-abortion activists even travel from across the border in Mexico to demonstrate at the clinic.

But for Molinar, her religion remains a guide. For her, it's not just about maintaining abortion access in this part of Texas, but also fighting for all the other services the clinic provides to low-income women and unauthorized immigrant women, like birth control and Pap smears.

"I still identify as Catholic, and I still feel that God loves me," she said. "I don't think I've confronted that yet. And I feel that a lot of members of the church shame these women, and they make them feel unloved and unsupported and that God doesn't love them, which is not true."

With abortion, it so often seems like the national divides are entrenched and that nothing will change a person's point of view. But in this Texas town and across the U.S., there are women like Soto and Molinar, who defy what you might think, and sometimes even switch sides.