Accessibility links
'Logan' Is The Best At What It Does — And What It Does Is Gritty Critic Chris Klimek says this small-scale, sun-blasted tale of an aging Wolverine's efforts to protect a young mutant "plays like the King Lear of the X-saga." 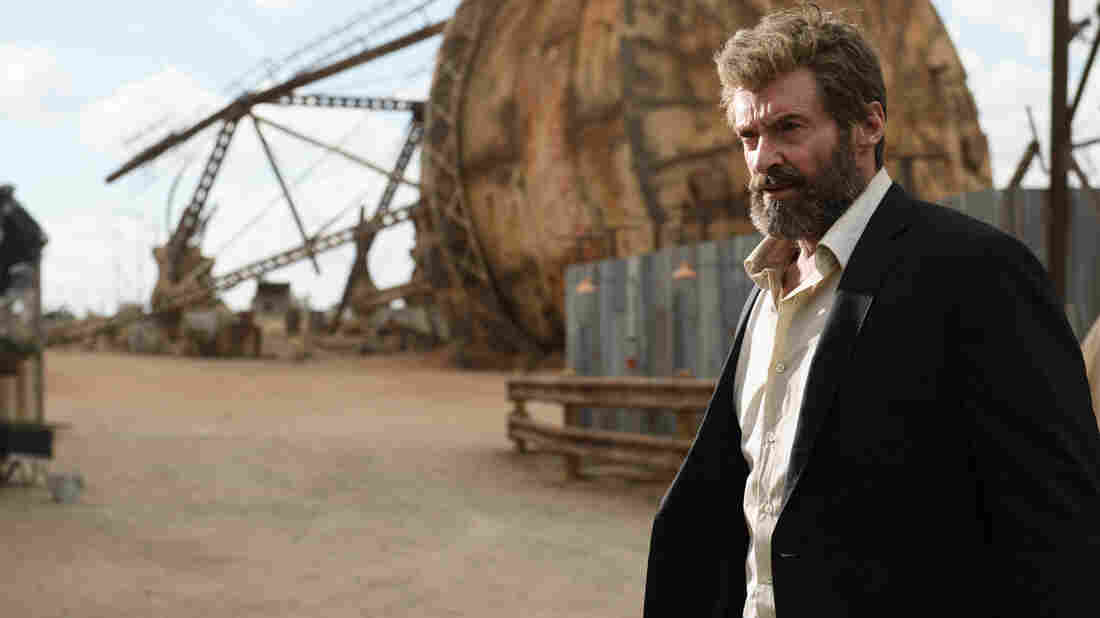 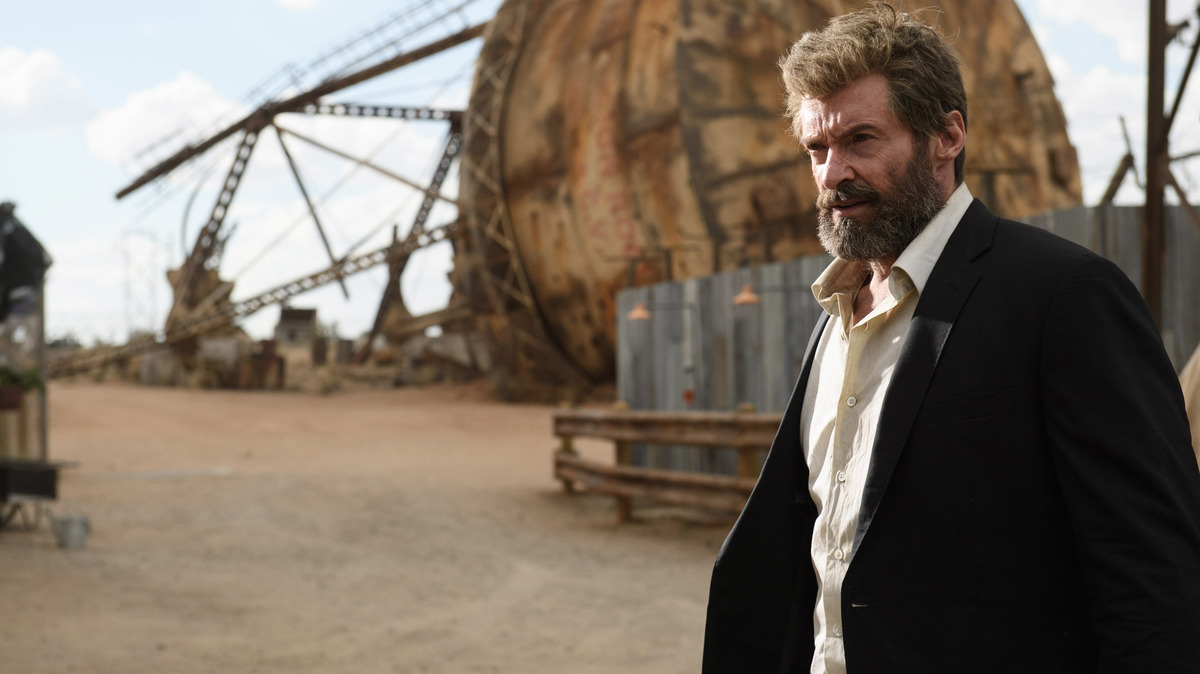 Long live Logan, James Mangold's sad, stirring requiem for the X-Men franchise's most beloved character. The only problem with calling it the boldest and most affecting superhero flick in many years is that it's barely a superhero movie at all.

It doesn't talk like a superhero: too many F-bombs, including its very first word. And it doesn't walk like a superhero: No computer-generated cities are razed in its finale, no unseen thousands sacrificed. Though with its gnarly R-rated medley of stabbings, slicings, skewerings, and impalings in what has been, Deadpool excepted, a PG-13 franchise, Logan sure feels bloodier than most of its ilk. And feels is the right verb: The deaths have weight. For once. To misquote the 40-year-old tagline of the very first big-budget comic book movie, you will believe a man can cry ...

... at a movie about a 200-year-old rage monster with a silly haircut and retractable knives implanted in his knuckles.

Because Logan is unlike any capes-and-tights movie we've seen. It does for the creaky X series what Creed did for the Rocky cycle, restoring the integrity and emotion of the earliest installments while introducing talented new blood. (As with Creed, you need only skeletal familiarity with the prior chapters to get gut-punched by this one.)

Most significantly, it's Hugh Jackman's swan song to the part that'll be cited in the first graf of his obituary, one he's played for 17 years — longer than any superhero has ever remained on duty, by a lot. He's played Logan more times than Sly played Rocky. More times than Connery or Moore played 007. More times than Shatner played Kirk — in movies, anyway. (And all sans hairpiece, despite the precariousness of his rapid-healing mutant coif!)

Unlike almost every other star who ever got famous in a heavily-merchandised role, Jackman never whined about his golden-goose gig. He was a musical theater guy, used to working hard, and he knew he'd lucked into an opportunity most actors would stab you through the heart with adamantium claws for. (In fact, he was a last-minute replacement Wolverine, after Scotsman Dougray Scott had to drop out of 2000's X-Men.) Jackman always seemed humble and happy.

Which is ironic, because the character has historically been defined by his temper. But it's rage of the largely impotent sort in Logan, which plays like the King Lear of the X-saga. Director Mangold gave us not only 2013's not-bad The Wolverine, but also Walk the Line, and 3:10 to Yuma. You can pick up echoes of all those movies here, and of Unforgiven, samurai pictures, the Coen Brothers, Children of Men, even Samuel Beckett. The scenes between Jackman and Patrick Stewart, who's been in these movies as long as he has, have an intimacy rarely found in films with nine-digit budgets.

One influence that's muted: the 40-odd years of Marvel comics in which the character has appeared. Even though, in a confident grace note, the movie actually lets Jackman leaf through old X-Men issues, dismissing them as "ice cream for bed wetters!" because that's not how it all went down. Feel free to infer a diss of any X-movies that didn't deserve him. There have been a few.

But at last we have a Wolverine movie as committed as Jackman is, and the grinning Australian wrings every drop of pathos he can from it. He's tremendous. Logan finds the short-tempered, steel-skulled, bicentennial beast-man finally feeling his age. It's an effort for his body to expel bullets now. He's hacking up blood like a courtesan in an opera. In one sure sign that the instant "healing factor" that once made him unkillable is flagging, he can even get drunk — and he does his damnedest to stay that way.

You need only scope out its sun-bleached El Paso-to-Oklahoma City-to-North Dakota trail to see that Logan belongs to a genre even older and more tradition-bound than superheroes: In every way that matters, it's a Western. Mangold leans into that association, hard, by having its three principal characters take a breather from the action in Act Two to watch the George Stevens classic Shane. If you know that movie, you'll get a pretty good clue about where this one is going.

Set in 2029 (where The Terminator began, back when 2029 was a long way off), Logan exists in a twilight world where the X-Men are a spent and dissipated force. No new mutants have appeared in a generation. Charles Xavier, who founded the team some 70 years earlier, is in his nineties and suffering from dementia. Mangold (who wrote the script with Scott Frank and Michael Green, drawing inspiration from two 21st century comics stories by Mark Millar and Kyle Craig) vividly imagines what this scenario might look like if the patient were the world's most powerful psychic. Basically, a Professor X not in control of his faculties is a loose nuke. Logan and Caliban (the comedian Stephen Merchant, playing a bad-mutant-turned-good) keep the prof sedated and isolated in a compound south of the border, hoping he won't take us all with him when he finally goes.

Logan, scraping together a living as a limo driver, reluctantly accepts a dying woman's request to escort a mysterious little girl (the astonishing Dafne Keen) from Mexico, up through the spine of the United States, to Canada. The Federales and a bunch of extras from The Road Warrior show up at his door (along with Boyd Holbrook from Narcos and Richard E. Grant from the immortal Hudson Hawk) and the movie becomes, like The Empire Strikes Back, one long, desperate chase — and with just as many surprises.

Though it runs 45 minutes longer than Bryan Singer's franchise-launching X-Men, it shares with that film a refreshing modesty of scale. X-Men was built largely on Jackman's protective relationship with Anna Paquin, as Logan trades on his burgeoning rapport with Keen. The world isn't threatened — just a handful of characters about whom we've come to care deeply.

Marvel's "mutants," separate from their other superpowered beings, have always been analogs for persecuted peoples; in this movie, they're immigrants. This gives Logan the kind of topical frisson and intensity that The Dark Knight had nine years ago, and no superhero movie has enjoyed since. Inevitably, there will be those who cry that we don't need dour, violent R-rated comic book adaptations; that crowd can take comfort in the certainty that the bright, quippy Marvel Studios films aren't going out of print until the human race does.

Logan is something else, a stripped-down, one-mic, late-period Johnny Cash-style supermovie. And it's a Marvel.