Accessibility links
Shirley MacLaine Gets 'The Last Word' — And You'll Want It To Be A bitter retiree hopes a few good deeds will salvage her reputation in this insipid dramedy. MacLaine is Hollywood royalty, but this film is strictly peasant fare. 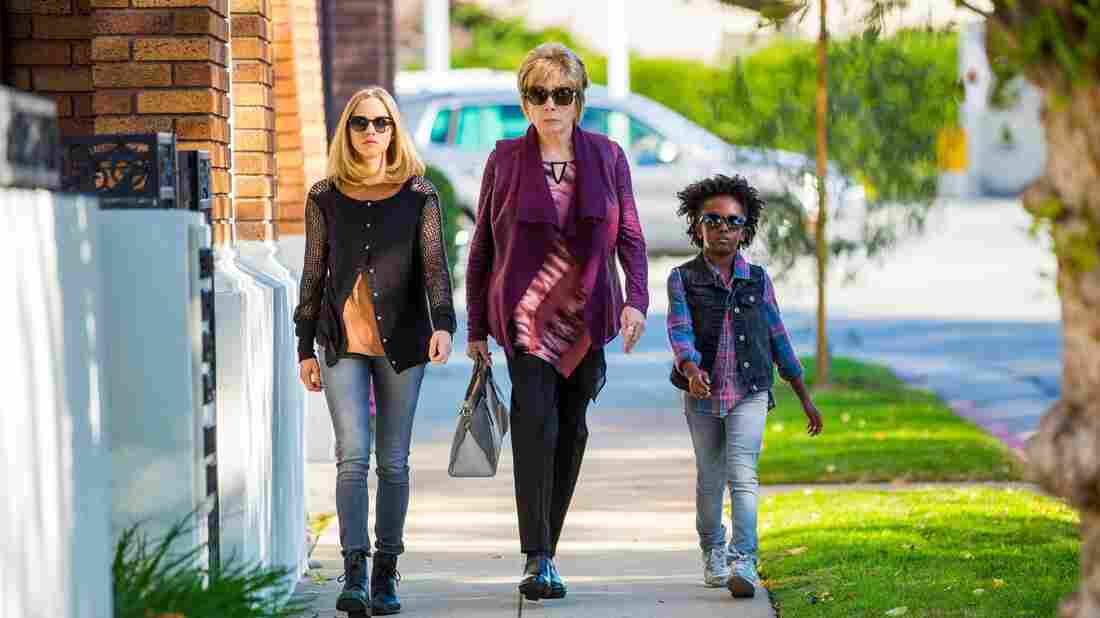 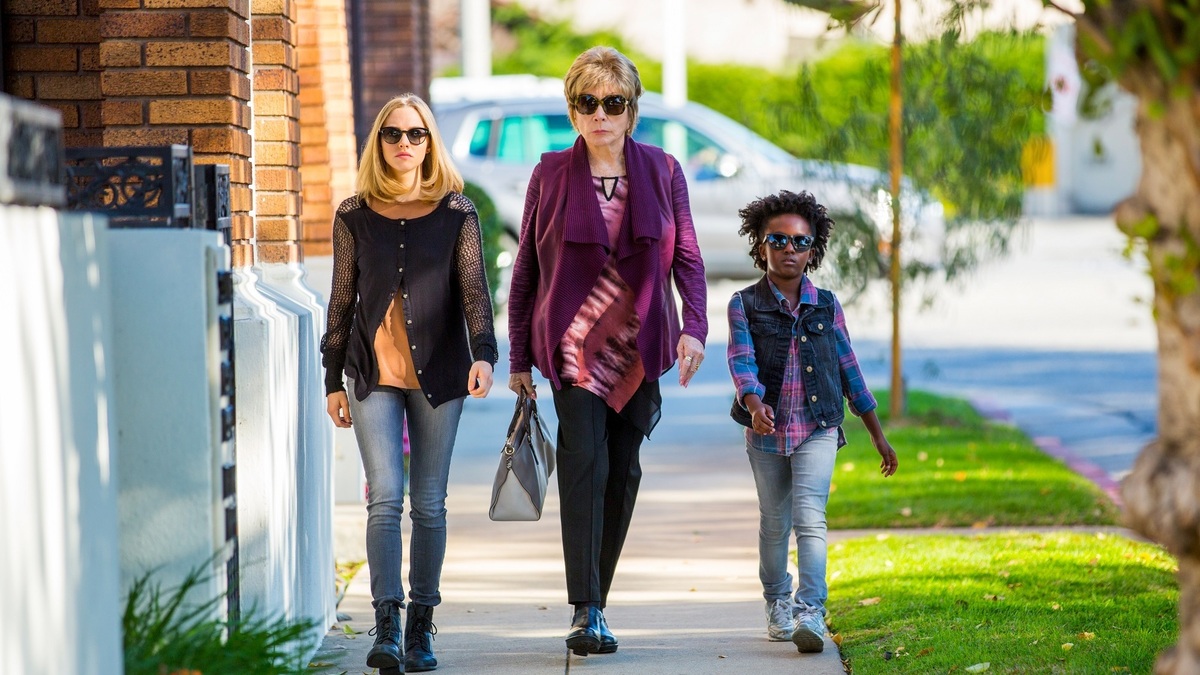 Ok it'd be awesome if that car behind them exploded right now (spoiler: it won't). L to R: Amanda Seyfried, Shirley MacLaine, AnnJewel Lee Dixon in The Last Word.

Actors are the most visible links the movies possess to their own past, because while actors age, the image of them that we carry with us does not. When you look at Shirley MacLaine today, you can see the young widow giggling over a corpse in Alfred Hitchcock's The Trouble With Harry, the melancholy mistress in The Apartment whose radiant smile masks the fact that she's given up on love and life, and the heartbreaking single mother forced to watch her daughter die in Terms of Endearment. You can see all of these women at once, if you like, and then you can reflect on MacLaine's astonishing stature in the Hollywood canon, that infamous ego elevating her whole life to another plane of performance, or her long-held New Age beliefs that she has lived many lives before her current one, nailing the trick of a full existence each time.

MacLaine has earned the right to coast by in otherwise unremarkable films that kiss the ground she walks on. It's the familiar Hollywood old-timer move, pulled off in recent years by the likes of Jane Fonda (Peace, Love, & Misunderstanding) and Jerry Lewis (Max Rose). But it's rare to see such hero-worshipping star vehicles as unsubtle about their intentions as The Last Word, in which a mean businesswoman tries to pad her own obituary with good deeds so everyone will fondly remember her after she has passed. Director Mark Pellington's treacly Sundance dramedy is about a woman shoring up her own legacy, but it's so empty and witless, dressing up a formulaic story with boatloads of unearned sentiment and embarrassing, one-note characters, that it seems destined to lie here as a bloated paperweight on MacLaine's own memory.

MacLaine plays Harriet, a retired ad executive who lives alone in her mansion, bossing around the hired help until a near-death scare compels her to reexamine her life. She recruits Anne, the local newspaper's obituary writer (Amanda Seyfried), to help her embellish her time on this mortal plane, an absurd breach of journalistic objectivity that's nevertheless one of the easier things to swallow about Stuart Ross Fink's insipid script. ("Let me get this straight," characters say, before repeating the film's oh-so-quirky premise back to us.)

Obituary writers secretly have the most thoughtful, heartfelt jobs in the newsroom. The excellent documentary Obit, due to arrive in theaters at the end of April, details how these reporters try to capture the best version of their subjects' lives with less than a day's notice, employing sweeping yet modest prose while extracting meaningful quotes from emotionally drained friends and family. The brief flashes of wit that do exist in The Last Word come when it tries to puncture this mythos; commenting on the empty platitudes accompanying a recently deceased acquaintance, Harriet snaps, "She was dead, and they were being polite." Here we're meant to see this woman as not only a control freak but also someone who can cut to the core of people, who "tells it like it is," even (especially) if she has to dance on a grave to do it.

Harriet then gives a wildly cynical breakdown of what she sees as the "four essential components of any good obituary," a checklist for a well-examined life — family, work, community service and "wild card" — that we assume the film is setting us up to transcend. Except it doesn't. That cynicism becomes the roadmap to Harriet's own earnest deification: she drags Anne to the local at-risk youth center to deliver a speech that confuses "at-risk" with "taking risks," then picks out her favorite poor child to mentor, as if shopping at a supermarket. The movie makes a joke about this, and then proceeds to let her do it anyway, selecting a tough black girl (newcomer AnnJewel Lee Dixon) who talks like a middle-aged white man's idea of a tough black girl, and having her follow the hero everywhere like a potty-mouthed puppy. Minority prop: Check.

Rediscovering a love of music, Harriet next dusts off her record collection and wheels it into the local alt-rock radio station, leveraging her bluster and complete lack of DJ experience into a morning drivetime slot. Wild card: check. The current DJ loses her job to this end-of-life crisis case who offers to do it for free, yet later applauds Harriet's first session, hooting, "Much respect." There are times like this when the film wants us to find Harriet's actions life-affirming and cute instead of what they are, which is cruel and selfish. In a reunion with her estranged daughter (Anne Heche, bringing her always-wonderful comic timing), Harriet can't help but laugh hysterically when she hears how successful she's become. In her mind this confirms she was a good mother, and thus no longer needs to feel guilt for decades of broken-off contact. This is a special kind of narcissist's logic that only sounds like redemption to someone who's never had to truly redeem themselves.

MacLaine clearly relishes being worshipped by young folks, and eats up the screen in her DJ chair, delivering withering looks at all of her co-stars. But she never gives her character a sense that any human connections she's making are intentional. Seyfried's job, then, is to express on her own face everything that MacLaine does not: to mug and mug, and mug some more, until we accept she's found her new mother figure. (Anne's own mother, of course, walked out on her when she was young, presumably bound for the Island of Conveniently Absent Parents.) To jump from Harriet's gynecologist remarking she has "the angriest vagina this side of China" to an end-of-life revisionist history stating that, actually, the woman wasn't all bad would take a special emotional leap — or, maybe, just a scene where three cross-generational misfits jump into a lake together.

How odd it is to see an actor who defines Hollywood royalty entrust her legacy to a movie that doesn't even know how to pad an obituary correctly.