Accessibility links
A Purple Heart Warrior Takes Aim At Military Inequality In 'Shoot Like A Girl' Maj. Mary Jennings Hegar is part of a lawsuit that argues excluding women from combat is unconstitutional. She says the lawsuit isn't about women's rights – it's about military effectiveness. 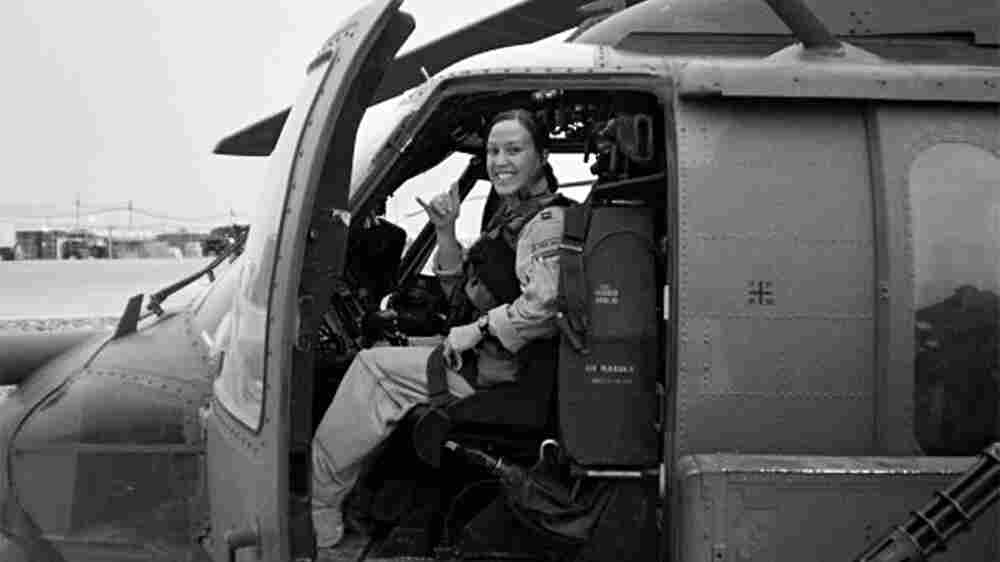 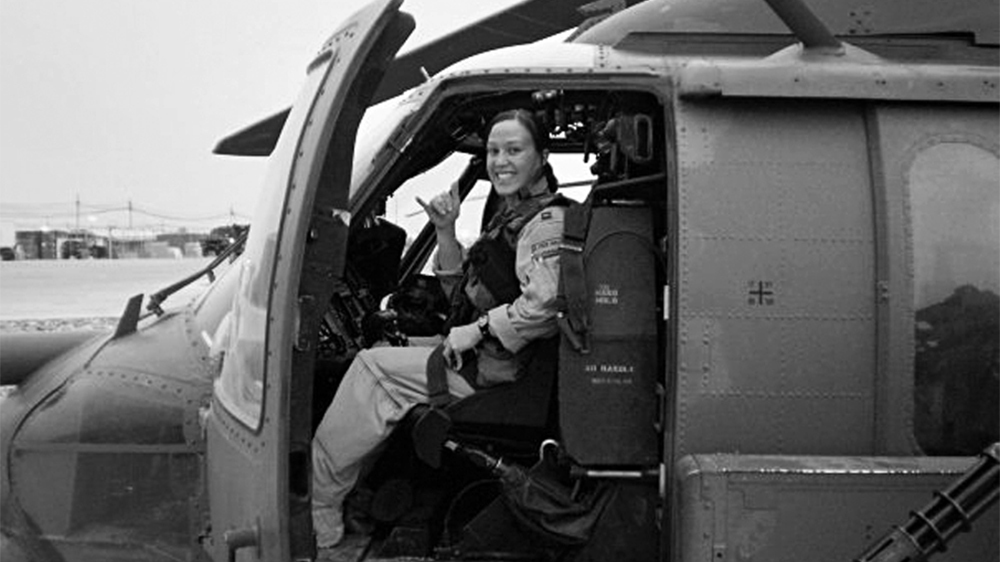 Maj. Mary Jennings Hegar served three tours in Afghanistan. She now lives in Austin, Texas, and works as an executive coach and consultant.

In 2009, Maj. Mary Jennings Hegar was shot down by the Taliban in Afghanistan while co-piloting an Air National Guard medevac helicopter. Though she was wounded in her rifle arm, Hegar managed to return fire while hanging onto a moving helicopter, which saved the lives of her crew and her patients.

At the time, the Department of Defense allowed female soldiers to participate in air combat, but forbade women from ground combat positions. Hegar tells Fresh Air's Terry Gross that the rule was often circumvented, which meant that women who served on the ground did not receive credit for combat duty.

In 2012, Hegar became a plaintiff in an ACLU suit against the Defense Department, arguing that excluding women from combat was unconstitutional. She says that participating in the lawsuit "wasn't about women's rights, it was about military effectiveness." That same year, then-Defense Secretary Leon Panetta and the Joint Chiefs of Staff lifted the ban on women serving in combat. But Hegar doesn't count the case as closed — she says, "The lawsuit remains open as a way for us to monitor integration, especially through a changing administration, and make sure that we don't take any steps backwards."

Hegar notes that when it comes to combat, physical strength is not necessarily the most important factor on the battlefield. "It's who is the best with their weapons, who is the best tactical thinker, ... who holds their composure when the bullets fly," she says. "I've seen 200-lb. men curl up in the fetal position and call for their moms before, just by the nature of my business."

Hegar received the Purple Heart and the Distinguished Flying Cross with a Valor Device for her service in Afghanistan. Her new memoir is called Shoot like a Girl.

I knew that I wanted to apply for a job in the Air Force, that I couldn't because it was a direct-combat, ground-combat role. But it didn't really sink in to me because it impacts the Air Force like 1 percent, whereas the other branches — the Marines, the Army — it really, really impacts them. ... 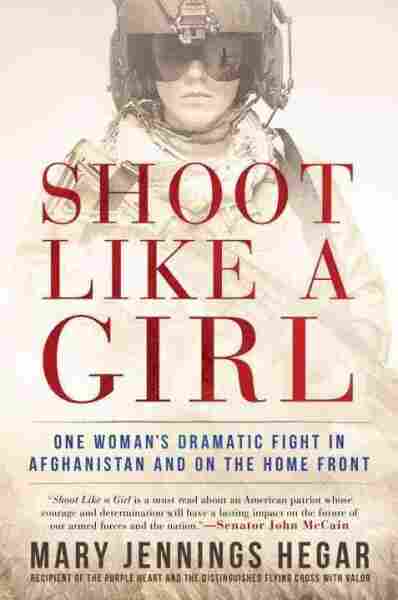 One Woman's Dramatic Fight in Afghanistan and on the Home Front

So the reason that that's important is, obviously, for things like promotion. But if you think about becoming a joint chief of staff or something like that, you can't have that job unless you have led troops in combat, unless you've been in combat, held combat roles and those types of things. Even though the women that I'm serving with today have been [in combat], they [wouldn't] get credit for that in their record. So they could never rise to the level of a joint chief of staff.

The Marine Female Engagement Team is a great example of that, where they go out and they're the ones who talk to the female locals and have to pat them down if they're going through a checkpoint. That's not something that the culture would allow our male soldiers to do, so there's a need for women in those roles. But because of the policy, they couldn't be assigned to [combat] units, which caused all sorts of problems. ...

On some of the arguments against women serving in combat

They range from concerns that are very legitimate and need to be carefully considered to concerns that are absolutely ridiculous. I think the No. 1 thing that pops up in people's mind is the physical strength issue and whether or not women are physically strong enough to be in combat, which I answer with a couple things: First of all, we've already disproven that that's an issue because there are women serving successfully in combat. Most combat is not a hand-to-hand knife battle that the person who can do the most push-ups is going to end up winning. That's just not the face of modern warfare right now. ...

I [was] in medevac, so I [saw] people having their hardest day. I've seen firsthand that the warrior spirit is not directly proportional to how many pull-ups you can do. ... In my opinion, you keep the standards very high and you maintain one standard. There shouldn't be two standards for women and men, there should be a standard for this job: To do this job, you should have to do these things. And those requirements should be job-specific and not arbitrarily high in order to specifically keep women out.

Some people who haven't really looked into what happened with the suit, they like to assume that I have taken some kind of anti-military or anti-establishment stance, and it couldn't be further from the truth. ...

... it was never about fighting the military — it was about this is the right thing to do for the military.

We were trying to double the pool of candidates that could apply for any position. So any time you increase the number of candidates that can apply, you're obviously going to get a better product out of that. So it was never about fighting the military — it was about this is the right thing to do for the military. A lot of people agreed with me, and we were trying to offer the secretary of defense — then Leon Panetta at the time — as much ammunition as possible to enable him to lift the policy.

On being a "warrior" and a mother

I think of myself as a bit of a mother bear, and if anybody poses a threat to my kids they'll see both my mother's heart and my warrior spirit. I think that they're compatible. Throughout history, there's examples of women who have been mothers and gone on to lead in combat — Queen Boudicca is one that I can think of. ... So I believe that being a mother and a warrior are absolutely compatible. In fact, I think the things about me that make me a good warrior are the things that make me a good mother: My steadfast commitment to integrity and excellence and putting others before myself and being protective. I tap on those same things as a mother.

Marines Gear Up For Women In Combat, But Will They Sign Up?