Accessibility links
How Are You? On This Podcast, The Answer Is: 'Terrible, Thanks For Asking' Host Nora McInerny isn't interested in small talk. When someone asks "How are you?" is the answer really "I'm fine"? Her show explores death, loss and trauma — and yet somehow is still full of laughs. 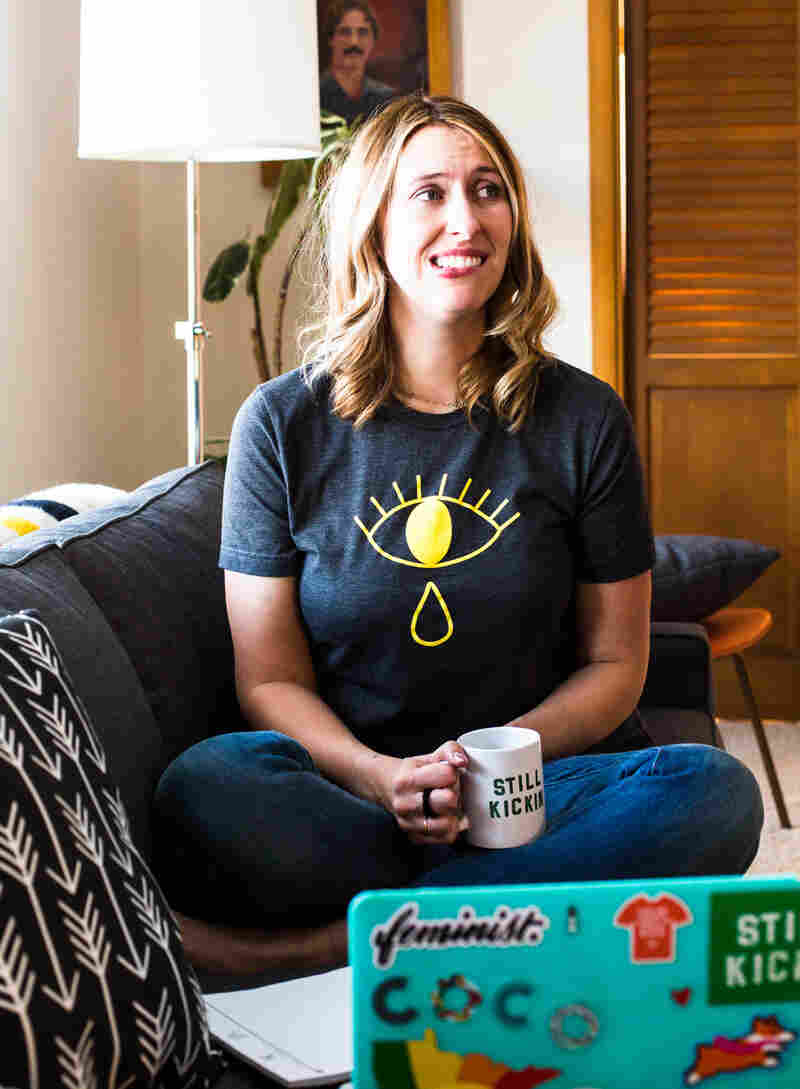 Nora McInerny is the host of the Terrible, Thanks for Asking podcast. She's also the author of the book It's Okay to Laugh: (Crying Is Cool Too). Kylee Leonetti/APM hide caption

Nora McInerny is tired of small talk. "I don't want small talk ..." she says on her podcast. "I want the big talk."

McInerny's show is called Terrible, Thanks for Asking, and she begins each interview with the same question: How are you? The responses she gets go way beyond the typical "I'm fine."

McInerny deals with death, loss and coming through trauma. But her approach to these tough subjects is saturated with love and humor.

She shares (or, as she puts it — overshares) some of her stories with NPR's Ari Shapiro.

On experiencing loss in her own life

Up until 2014 I had the most charmed, uneventful life that a person could possibly hope for. I think that if you looked up "privilege" in the dictionary you would have seen my senior photo from high school. ...

It's hard to just list those things off without sounding as if I'm minimizing it, but at some point in time, that just becomes your story.

It's almost impossible to know the right thing to say. ... Even if people say the wrong thing it is a sign that they're trying. ... Silence is the worst thing you can hear from people.

On how people react to someone who has experienced a loss

[People ask], "Oh, how are you?" And nobody actually wants to hear: "Well, I frankly have been staying up all night watching Gilmore Girls and drinking a box of white wine that is almost gone." ...

On her instinct to find humor even in sad times

I think part of it is how I was raised. My father was very funny and very dry. And so he was in the ICU and the nurse walked in and said, "Steve how are you doing?" And he was on a respirator. But he said slowly, "I'm kind of dying here" — because he was. ... She was so horrified. And all my brothers and sister and I were laughing ... because of course that was my dad — and that's how Aaron was, too.

He was definitely a favorite on the oncology floor and in the radiation department because he was always so funny ... that's how we got through. ... In the E.R. after he had had a lot of seizures and we had yet to see an extremely attractive doctor à la Grey's Anatomy and we were commenting on that. And the doctor walked in and he looked like a Ken doll. Aaron kept saying, "I think that they hire him just to deliver bad news because it's hard to feel really bad when it comes from an incredibly handsome person."

I found out later that he is a doctor.

'There Is No Good Card For This': What To Say When 'Condolences' Isn't Enough

It's not as if I sit down trying to think, gosh how could we make this awful thing really funny? I think that those kinds of moments just happen naturally. ... When it is your story you can find those little points of humor even in the worst things. I think that's really common. Anyone who's been through something really traumatic has probably also laughed at it. ...

We had this woman come in — it was literally the day after her husband had died. ... She sat right down and she talked to us about her husband having died and we laughed together and she stopped herself and said, "I'm afraid people will think I'm terrible for laughing right now." And of course not — you are allowed to feel all of the things all at once. I think her fear was being judged for that.

'Always Go To The Funeral,' An Essay By Deirdre Sullivan

On the way painful experiences can connect us

I am reminded every day — because I sort of choose to surround myself with these stories — that I'm not special. The experiences, the pain that I have, it's obviously unique to me. We all have our own. But it doesn't make me and it doesn't make me different from other people.

I had sort of wrapped Aaron's death and my dad's death around me like armor — like it was something that made me different from other people, that made me harder to understand. And the fact is that everybody has these kinds of pain — it's different brands for all of us, but that is a way of connecting. It has helped me look more tenderly on the people around me. I now am sort of more intentional about reminding myself that we all carry something, and that we are, for the most part, all doing our best.