Accessibility links
Book Review: 'In The Name Of The Family,' By Sarah Dunant Sarah Dunant's latest novel follows one of history's most notorious families — the Borgias. But it's the small, domestic details, not the bigger picture, that captivate. 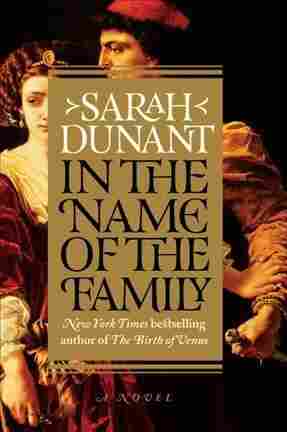 In the Name of the Family

Title
In the Name of the Family
Author
Sarah Dunant

What inspired realpolitik bare-knuckler Niccolo Machiavelli to compose his 16th century masterwork, The Prince? The real question might not be what, but whom? Cesare Borgia stands as the best candidate, at least according to In the Name of the Family, historical novelist Sarah Dunant's second work (after Blood and Beauty) devoted to the tightly knit Borgia clan. The family dominated the military, political and religious affairs of the period. At the height of its sharp-fanged power, Cesare Borgia thundered across the region's duchies and city-states, bloodying them thoroughly before making them his own. His brutality and cunning epitomize the qualities that we think of today when we use the term Machiavellian.

For Dunant, lust for power constitutes only a part of the Borgias' story. Readers need not be familiar with the history to be intrigued by the characters: the dominating patriarch, Rodrigo Borgia, elevated in 1492 as Pope Alexander VI; Cesare, the charismatic head of the papal military machine, and Lucrezia, Rodrigo's spoiled and beautiful daughter. Wait a minute — a pope with a daughter? Such was the brave old world the Borgias inhabited.

As the novel opens, Machiavelli travels as an envoy from Florence to Rome. Dunant deftly humanizes the man behind the classic text. Niccolo, as he is called throughout, "likes women and wine as much as politics" and "can turn the air blue with his jokes." He "reads" the political machinations surrounding Cesare: "This is theater, all of it! The mask, the lapping candles, the moonlight, the palace with the silent cowed town at his feet."

The pope, as we see him here, is sentimental, obese, a lion in winter, like Brando in the tomato garden of The Godfather. Alexander still grieves for his murdered son Juan, killed Mafia-style six years before, fished out of River Tiber "riddled with stab wounds." Lucrezia Borgia comes across not as the viper-vixen that legend has given us, but rather as a ripe, glowing newlywed. She takes it into her head to visit her new husband's foundry, a man-cave of sorts where he indulges his hobby of metalwork.

"As he looms in front of her, he seems to have grown, the black fuss of chest hair crawling up his neck from his open jerkin and his face devil dark with soot and grime. She feels a hot wave of shame in her cheeks." We are not quite in Hilary Mantel territory here, where descriptions of a royal court shine with subtlety and intellectual ferment. With Dunant plot is primary, and the story must keep chugging onward.

The real war of the age was against disease, a one-sided, rarely won conflict that laid waste to youth, beauty and privilege. The formerly ravishing Lucrezia falls ill, and healers play their part, but a cure is truly only a matter of luck. Dunant employs to good effect the historically documented, haunting line spoken by Lucrezia as she lies ailing, in the author's interpretation, from syphilis. "I am dead," she says, throwing everyone around her into a panic. In the sickness-besieged world of the novel Cesare, once known for his good looks, now customarily dons a mask to hide his pockmarked face. Bouts of illness serve to humanize the cold-hearted Borgias. Cesare might be a stone killer, but those pesky genital lesions elicit sympathy.

Italy's patchwork quilt of kingdoms and duchies in the period were enough to challenge any cartographer, and occasionally frustrated this reader. I could have used a map. The book's abundant domestic minutiae hooked me more, including Alexander's beloved dish of raw eels with "flesh marinated in honey and vinegar," Lucrezia's overflowing shoe closet (pair after pair made of "perfumed Spanish leather," different ones for every ball), and the loving letters from the pope to his daughter.

Michelangelo's colossal sculpture of David is the talk of the town, and Leonardo Da Vinci drifts through the action, creator of an exquisitely drawn map, "its corners oily with the sealing wax that fixes it" to the stone wall. Machiavelli writes while "cleaning his teeth with a rag soaked in rosemary and vinegar." Reading In the Name of the Family, I began to smell the scent of oranges and wood smoke on the Ferrara breeze. Such Renaissance-rich details fill out the humanity of the Borgias, rendering them into the kind of relatable figures whom we would hope to discover behind the cold brilliance of The Prince.

Read an excerpt of In the Name of the Family