Accessibility links
Can Democrats Turn Activism Into Votes? Special Elections Might Be A Clue A victory in a Delaware legislative race has Democrats enthused, and some think they can pull off an upset in a Georgia House special election, giving evidence of growing anti-Trump sentiment. 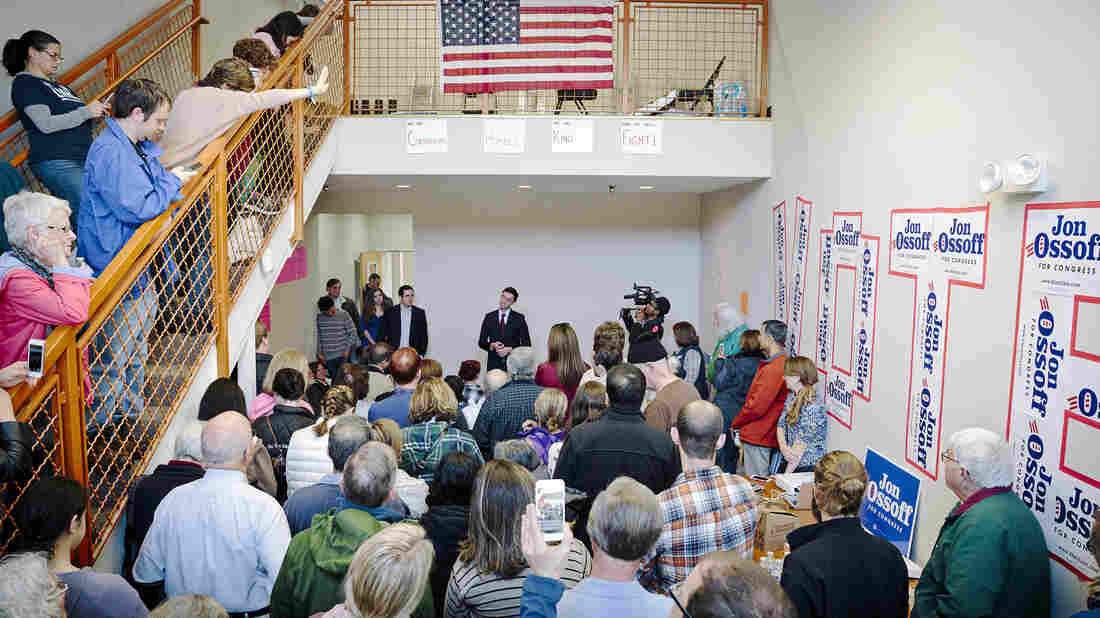 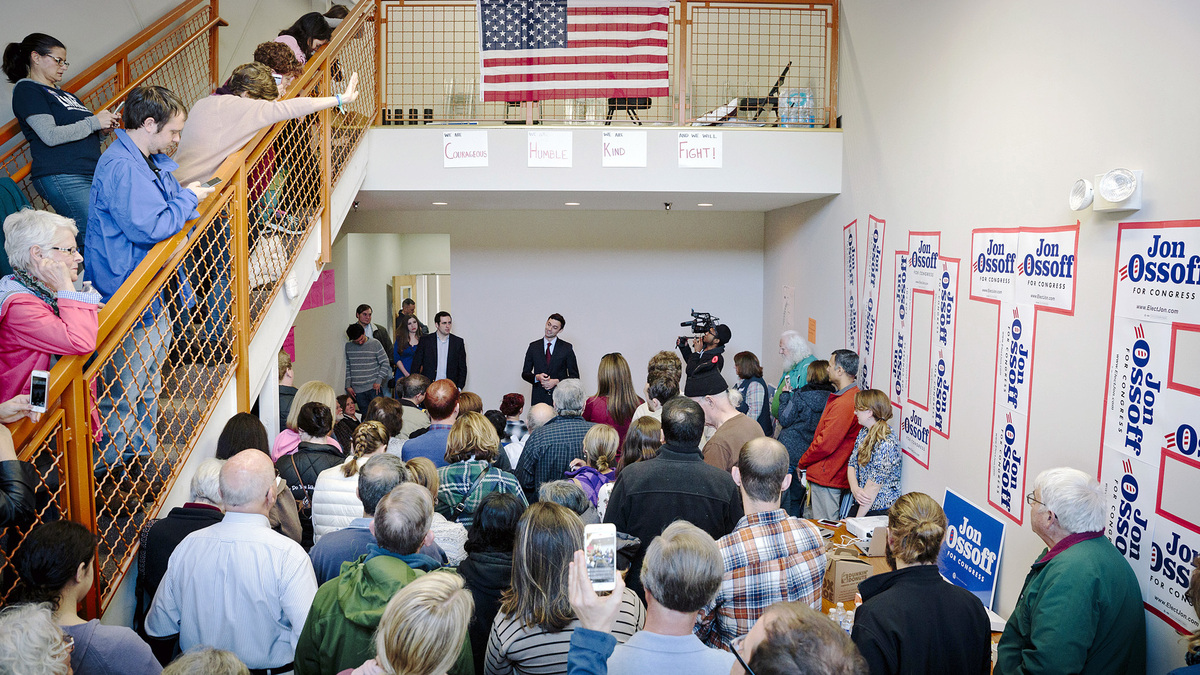 Democrats have a long way to go to rebuild their party after brutal losses across the board last November. But they're seeing glimmers of hope in recent and upcoming special elections where they argue the backlash to President Trump is resulting in change at the ballot box.

On Feb. 25, Democrats won a special election for a Delaware state senate seat that normally wouldn't have gotten so much national attention. But party officials, including newly-elected Democratic National Committee Chairman Tom Perez, were quick to point to the margin of their win as evidence that liberal protests were being translated into real results.

With Republicans In Charge, Democrats Plan To Redefine Their Mission

On NBC's "Meet The Press" Sunday, Perez called Democrat Stephanie Hansen's victory that kept Democrats in the state senate majority, a prime example of "how we are putting our activism into action." The race had unusually high turnout for a special election and drew more than 1,000 volunteers an oft-overlooked legislative race Democrats only won by 267 votes two years ago.

"We are the home of a sleeping giant that I believe has awoken and that sleeping giant that's representing the values, the Democratic values of inclusivity, of compassion, of kindness, of working together. You know, the opposite of prejudice," Hansen said.

Test of anti-Trump backlash in Georgia

Keeping control of a state legislature in one of the country's smallest states won't have Democrats back on any type of path to redemption just yet.

But they are looking to another key test case in a Georgia special congressional election.

The suburban Atlanta district, vacated by Trump's now-Health and Human Services Secretary Tom Price is exactly the type that Democrats need to flip if they want to put the House in play. It voted for Mitt Romney by 24 points four years ago, but Trump only carried it by 1 point last November.

The race has attracted 18 candidates, and if no candidate gets 50 percent of the vote in the April 18 all-party primary — a virtual impossibility — the top two finishers, regardless of party, will advance to a June 20 runoff.

There are several top Republicans in the crowded field who could come out on top, including former Georgia secretary of state Karen Handel, who's run statewide for governor and for the Senate. But national Democrats are coalescing behind 30-year-old Jon Ossoff, a documentary filmmaker and former congressional staffer.

Ossoff has the backing of his former boss, Georgia Rep. Hank Johnson, as well as neighboring-district congressman and civil rights hero John Lewis. His candidacy has attracted some star power too, with social media attention from actors like Kristen Bell and George Takei, which has helped him raise and eye-popping $2 million already. The Democratic Congressional Campaign Committee already has nine staffers on the ground in the district.

Ossoff's early attention has made him a target of Republicans. The Congressional Leadership Fund, a super-PAC aligned with House GOP leadership, announced this week it's spending $1.1 million on ads through the primary. It unleashed an ad with footage of Ossoff dressing up like Han Solo and advocating for an easing of his school's alcohol policy in a parody with his Georgetown University a capella group.

The early GOP investment is a signal that Republicans are taking the threat seriously. Still, they argue Ossoff is more from the progressive wing of the party, and that his candidacy isn't indicative of the strategy then-Democratic Congressional Campaign Committee chairman Rahm Emanuel used in 2006 to win back the House by running more moderate candidates in swing districts. Then again, Democrats are divided internally--evidenced by their contentious leadership race last week. So, such a strategy may no longer work for the party as a whole.

Ossoff responded with his own ads on Friday that paint himself as more of a centrist and willing to work across the aisle. One ad also makes clear he's running on an anti-Trump platform, with the closing promise: "When President Trump embarrasses our country or acts recklessly, I'll hold him accountable."

National Republicans argue that Democrats already tried to run on an anti-Trump message last fall, and it didn't work.

Will marches and protests equal votes and volunteers?

But Trump's approval numbers have taken a dramatic fall in the subsequent months and Republicans have been put on the defensive in recent town halls, with angry constituents demanding answers on Obamacare repeal, investigations into alleged Russian ties to Trump administration officials, and more. GOP leaders have tried to dismiss that as liberal organizing unrepresentative of the true will of the people, or simply "astroturfing" by paid protesters.

Mo Elleithee, a former Democratic strategist who now directs the Georgetown University Institute of Politics and Public Service, cautioned against drawing too many conclusions about any special election, and noted that both parties have learned over the past year that political trends can rapidly change.

Still, he said that this is a "level of energy and a level of organization that we haven't typically seen by Democrats at this stage of the electoral cycle."

"You don't read too much into any single special but if suddenly you start to see Democrats building off of each one of these, and you start to see some sort of a trend in different special elections, then they may be tapping into something electorally," Elleithee said.

Carolyn Fiddler, communications director at the Democratic Legislative Campaign Committee, said there's evidence beyond Delaware or even Georgia that her party's enthusiasm is being channeled in positive ways. There were also three legislative special elections in Connecticut this week. Democrats held onto two open seats, and by much larger than usual margins. And in a GOP-held seat that has about a two-to-one Republican advantage, they came within 2,000 votes of an upset compared to a 16,000 vote loss the last time the seat was up.

"Trump's presidency has really crystallized priorities for a lot of progressives and Democrats out there," said Fiddler. "Not only are they looking for ways to make their voices heard through marches and protests, they're directing their activism in really critical ways, by volunteering and voting."