Accessibility links
Supreme Court: Evidence Of Racism In Jury Deliberations Allows Court Inquiry The U.S. Supreme Court ruled in a 5-3 decision that trial courts may look into jury deliberations if there is clear evidence of racial bias. Deliberations are normally off-limits after a verdict. 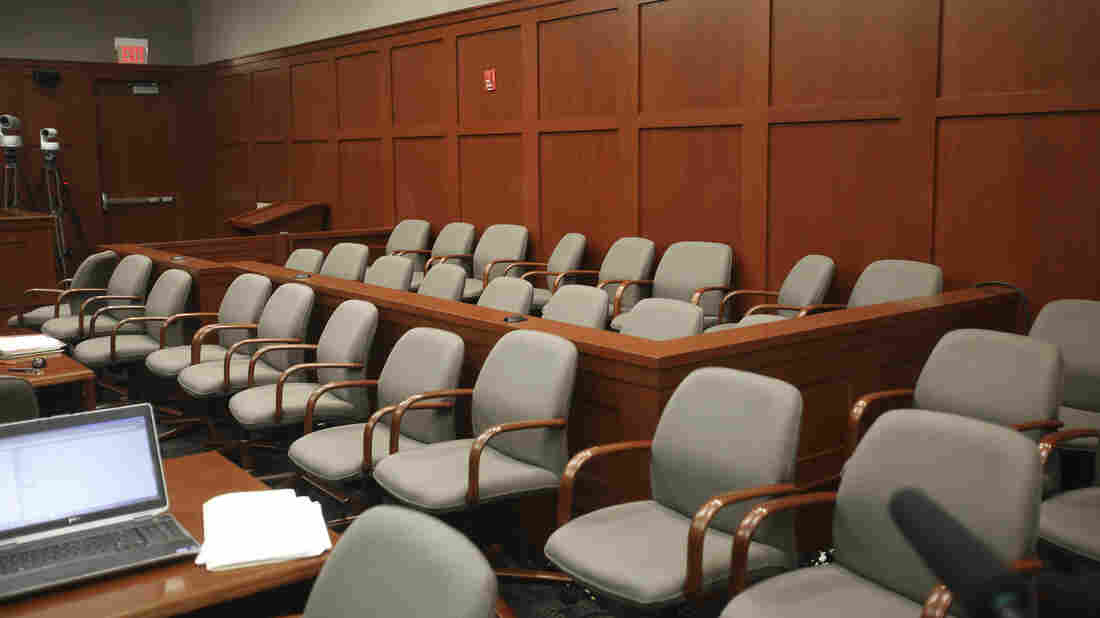 The Supreme Court ruled on Tuesday that when there is clear evidence of racial bias during jury deliberations, they can be unsealed by a court to investigate whether the defendant's rights were violated. Joe Burbank/AP hide caption 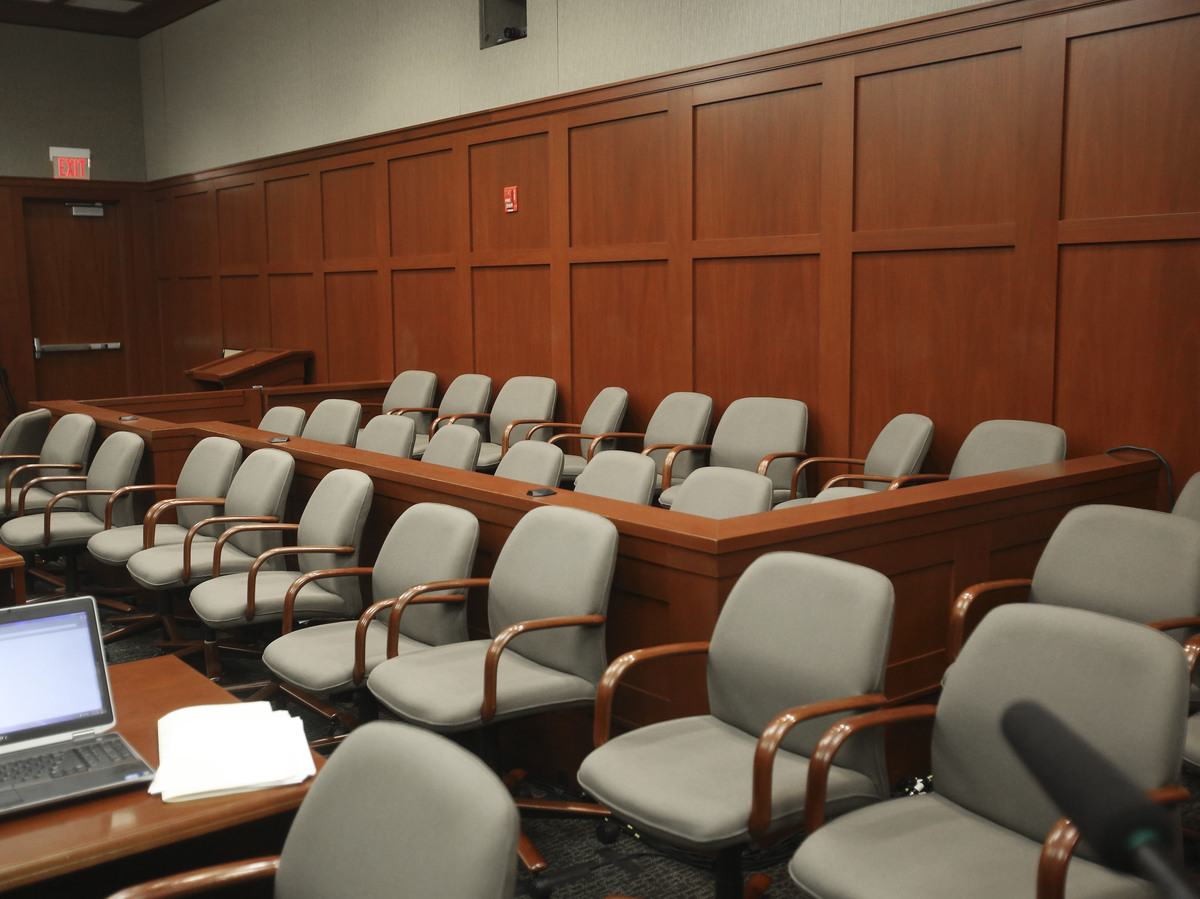 The Supreme Court ruled on Tuesday that when there is clear evidence of racial bias during jury deliberations, they can be unsealed by a court to investigate whether the defendant's rights were violated.

The U.S. Supreme Court ruled Monday that when clear evidence emerges after a jury verdict that there was racial bias during deliberations, the trial judge must make an exception to the usual rule protecting the secrecy of deliberations in order to determine whether the defendant was denied a fair trial. The vote was 5-to-3.

Writing for the court majority, Justice Anthony Kennedy said that racial discrimination is unlike other types of misconduct that may occur in the jury room because it "implicates unique historical, constitutional and institutional concerns."

The ruling came in the case of Miguel Peña-Rodriguez, a Colorado horse trainer arrested in 2007 after two teenage girls identified him as the man who groped them in a darkened restroom at a horse barn.

At trial, the prosecution rested its case on the victims' identification of the defendant. The defense highlighted the short time the girls actually saw the attacker, the suggestibility of the way police brought the girls to see the suspect — through the window of a police cruiser, at the roadside where the suspect was detained.

The jurors initially deadlocked, unable to reach a verdict. The judge told them it was their duty to try again.

After 12 total hours of deliberations — and much shouting that could be heard outside the jury room — the jury found the defendant guilty on two misdemeanor counts, but failed to reach an agreement on the felony. The state subsequently dismissed the more serious charge.

Peña-Rodriguez was sentenced to two years' probation and was required to register as a sex offender.

On the day the trial ended, two of the jurors told the defense lawyers that during deliberations, one of the other jurors, identified in court records as H.C., repeatedly had expressed a bias against the defendant and his alibi witness because of their Hispanic ethnicity.

With the trial judge's permission, the lawyers then obtained affidavits in which the two jurors quoted H.C. as saying that, from his experience as an ex-law enforcement officer, he suspected the defendant was guilty because Mexican men "believe[d] they could do whatever they wanted with women," and that where he used to patrol, "nine times out of ten Mexican men were guilty of being aggressive toward women and young girls."

The affidavits also quoted H.C. as saying that the alibi witness wasn't credible because, among other things, he was "an illegal." In fact, the alibi witness had testified at trial that he was a legal resident of the United States.

After receiving the affidavits, the trial judge ruled that there could be no questioning of jurors to see if a new trial would be justified because Colorado, like most jurisdictions, has a rule barring inquiry into what happens in the jury room. The Colorado Supreme Court, by a 4-3 vote, agreed.

Racism "especially pernicious in the administration of justice"

On Monday the U.S. Supreme Court reversed those decisions, declaring that "the central purpose" of the Fourteenth Amendment guarantee to equal protection of the law was to eliminate racial discrimination emanating from official sources in the states.

Writing for the five-justice majority, Kennedy said that even after ratification of the Fourteenth Amendment, it became clear that racial discrimination in the jury system posed a particular threat, both to the amendment's promise and to the "integrity of the jury trial."

After the Civil War, he wrote, the South began a practice that would long endure: All-white juries punished black defendants "particularly harshly, while simultaneously refusing to punish violence by whites, including Ku Klux Klan members, against blacks and Republicans."

Citing one example, Kennedy noted that in the years 1865 and 1866, all-white juries in Texas heard a total of 500 prosecutions of white defendants for killing African-Americans. In all 500 cases, the white defendants were acquitted.

Since 1880, Kennedy said, the Supreme Court has sought with ever greater intensity to prevent the exclusion of jurors on the basis of race.

"The unmistakable principle underlying these precedents is that discrimination on the basis of race, odious in all aspects, is especially pernicious in the administration of justice," he wrote, adding that permitting racial prejudice in the jury system damages both the fact and the perception of the jury's role as a vital check against the wrongful exercise of power by the state.

Indeed, in the past the court has even refused to allow post-trial probing of jury deliberations in cases involving evidence that some jurors may have been under the influence of drugs or alcohol while deciding a case.

It would not be possible, Kennedy said, to rid the jury system of "every irregularity," but "the same cannot be said about racial bias, a familiar and recurring evil that, if left unaddressed, would risk systemic injury to the administration of justice."

For these reasons, the court ruled that where a juror makes a clear statement that indicates he or she relied on racial stereotypes or animus to convict a criminal defendant, the Sixth Amendment right to a fair and impartial jury trial requires that the usual jury secrecy rules give way to permit the trial judge to consider whether there is evidence that the defendant has been denied a fair trial.

Beyond that the court, at least for now, did not set down a standard for judging prejudice — except to say that for the inquiry to go forward, there must be "a showing that one or more jurors made statements exhibiting overt racial bias that cast serious doubt on the fairness and impartiality of the jury's deliberations and resulting verdict."

Writing for the three, Alito said that, despite the "admirable intention of the majority," its decision "is a startling development" that pries open the door of the jury room for the first time in centuries. The ruling, he predicted, will "prompt losing parties and their friends, supporters, and attorneys to contact and seek to question jurors, and this pestering may erode citizens' willingness to serve on juries."

The majority replied that although the federal government and most jurisdictions have not in the past permitted post-trial probing of jury deliberations, 17 jurisdictions — some for as long as a half-century — have allowed an inquiry to determine if racial bias tainted the verdict "with no signs of an increase in juror harassment or a loss of juror willingness to engage in searching and candid deliberations."