Accessibility links
Rebuilding A Father's Life — But Tearing Down His Myths — In 'Dadland' Keggie Carew's father was a genuine war hero, but he was on shakier ground close to home. And after he began to suffer from dementia, Carew set out to reconstruct — and demythologize — his life.

Rebuilding A Father's Life — But Tearing Down His Myths — In 'Dadland'

Rebuilding A Father's Life — But Tearing Down His Myths — In 'Dadland' 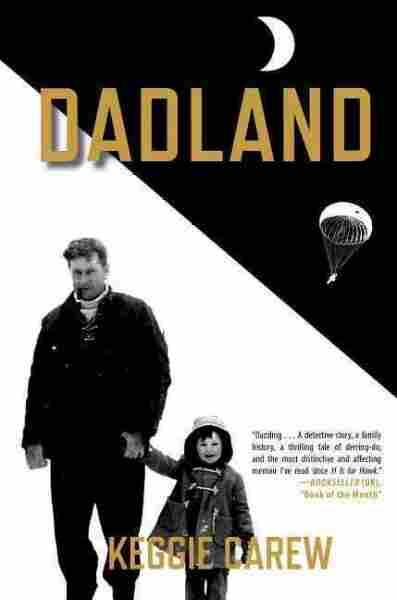 Keggie Carew dives deep into her father's world in this extraordinary blend of personal memoir, biography, and World War II military history. Recently awarded UK's Costa Book Award for biography, Dadland brings to mind Helen MacDonald's H is for Hawk in the way it soars off in surprising directions, teaches you things you didn't know, and ambushes your emotions. It's a similarly fierce and unconventional book that defies categorization to explore mortality, loss, life decisions and influences through a daughter's intense bond with her father.

The dad of the title actually was a hero — at war, if not at home. As a member of the Jedburghs, an elite British Special Operations force, Tom Carew was parachuted behind enemy lines in France and Burma in 1944 to train and arm guerrilla resistance forces against occupying German and Japanese troops — hair-raising missions that his daughter reconstructs with novelistic immediacy. He was all of 25, and thrived on the danger and autonomy. After remarkable success on both fronts, the steely-nerved, Irish-born maverick was dubbed "Lawrence of Burma." But such exploits did not translate well into postwar life. As his daughter comments, "How would anything measure up to this?"

Keggie Carew launched her own special operation to get a handle on her father as he lapsed into dementia in his eighties. She attacked her mission with verve, unearthing books, family letters, photographs, diaries, and official records at the National Archives in Kew, amplified by interviews with historians and surviving Jedburghs. "I described it to friends using the analogy of two trains drawing out of the station, going in different directions," she writes. "As Dad was losing his past with his dementia, I was trying to retrieve it." Her personal stake in this enterprise was her need to understand "the gravitational pull of his influence," which had affected the trajectory of her own life for both good and bad.

'Dadland' brings to mind Helen MacDonald's 'H is for Hawk' in the way it soars off in surprising directions, teaches you things you didn't know, and ambushes your emotions.

Carew puts her father's larger-than-life heroism in perspective by interspersing vividly intense war scenes with glimpses of his increasingly disoriented later years and frequently hilarious flashbacks to her childhood — like the outrageous absentee note he sent her teacher when she was perhaps 12: "I am sorry Keggie was not at school yesterday, she had a bad hangover."

Dadland is also filled with fascinating, less personal side stories, including the murky death in 1996 of Nixon-era CIA Director William Colby, a former Jedburgh whom her father had suggested she call if she got in trouble during stateside wanderings in her teens. (She regrets that she didn't contact him.) Among the book's many unexpected bonuses is Carew's remarkably clear explanation of the roots of Myanmar's long struggle for independence, though she concedes that she's been influenced by her father's point of view and is "no specialist ... Metaphorically I too am parachuting into a jungle."

The danger of frontloading a narrative with death-defying war stories is not being able to sustain the pitch. In fact, that's what happened to Tom Carew's life, though not to his daughter's vigorous account of it. But the saga of his postwar life is a sad one, dominated by mounting monetary and marital woes. He and Carew's mother, Jane, had a few happy years in Gibraltar in the early 1950s, before he quit the army and they returned to provincial England. But Jane, saddled with four children and her father-in-law while her husband traveled constantly in search of jobs, literally went stark raving mad. Her culinary specialty, graveyard pudding — "butterscotch Instant Whip in which she positioned blanched almonds upright like tombstones" — pretty much sums up the bleak household, which was sometimes as violent as a war zone.

Like her father, Carew comes across as a spirited individualist. She's not afraid to tackle bitter issues of class and inheritance, or to complain that her restless, much-diminished father is losing it and driving her crazy in the process. But her inability to hold back even a single posthumous dig at her detested stepmother — whose unforgivable crime was to insert herself between Carew and her father for 30 years — becomes inadvertently comical. Fortunately, this unbridled resentment is offset by her moving forgiveness of both parents' considerable failings toward her and her siblings.

Tom Carew, who died in 2009, emerges from this beguiling, de-mythologizing homage as an irrepressible firebrand whose not-always-prudent advice was, "Be more fearless. Be wilder. Be braver. Be different." Carew writes, "I've been in thrall to Dad too many years. It's been hard to grow out of the need to impress." One likes to think her father would have been as wooed and wowed by Dadland as we are.