Accessibility links
How Do Americans Feel About The Courts? Let Hollywood Be The Judge With all the recent talk about politics and the judiciary, NPR's Bob Mondello has been thinking about how judges are depicted on screen. He takes us on a tour from Duck Soup to Judgment at Nuremberg. 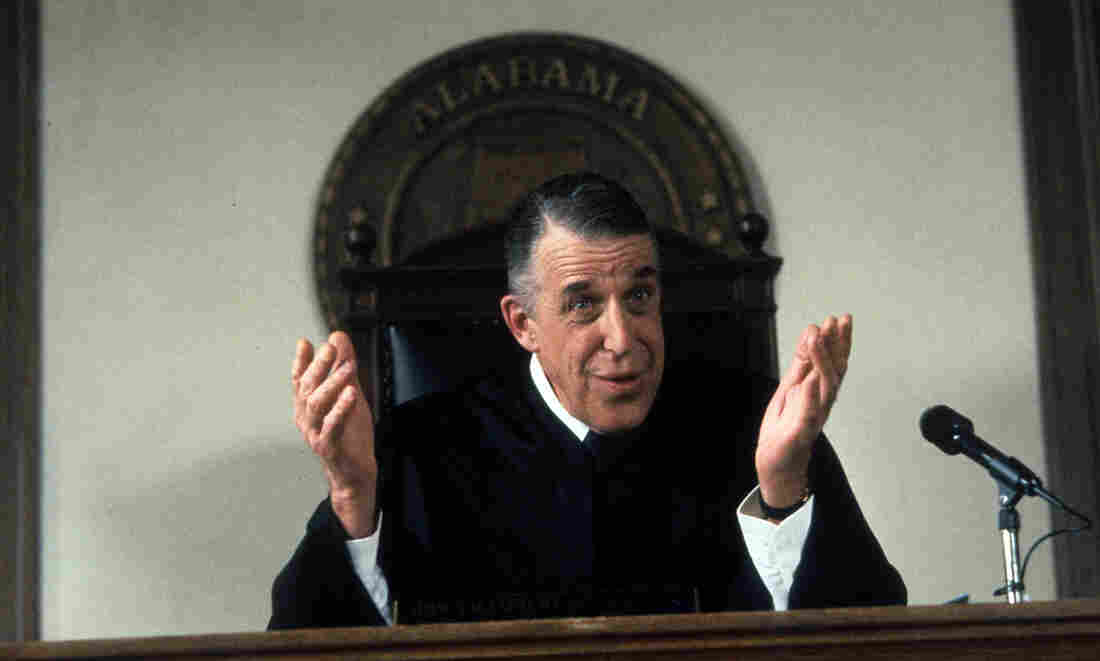 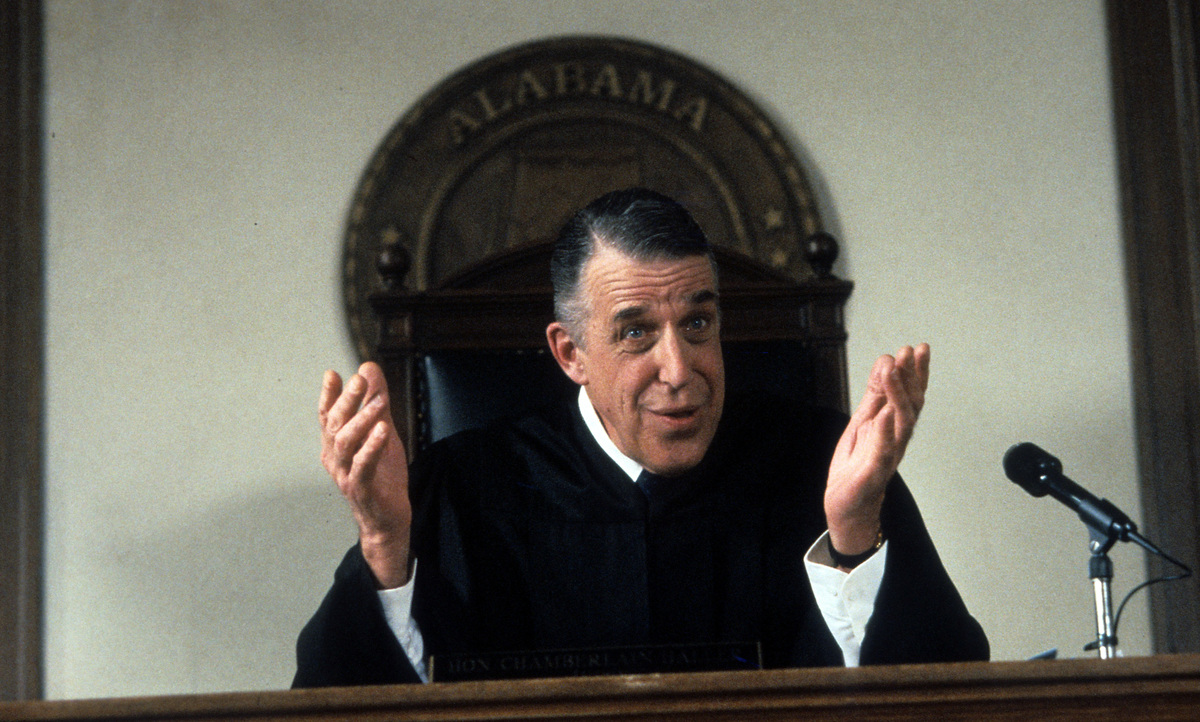 Order in the court — but maybe not in movie theaters.

With all the talk lately about politics and the judiciary — fights over Supreme Court vacancies, the President complaining about "so-called" judges — I've been thinking about the judges I've seen on screen, and how their depiction might have intersected with public opinion through the years.

Certainly, there was a time when judges were held in high esteem. When a teenage Mickey Rooney had a problem in the Andy Hardy movies, he turned to his onscreen dad, Judge Hardy. In the first of those films, A Family Affair (1937), the judge was played by Lionel Barrymore, who sat patiently with the young star, explaining why he needed to justify his request for five dollars.

"Gee Pa, says the frustrated teen, "Sometimes I wish you weren't a judge, because it's kinda taking advantage of a guy to keep showing him two sides of a question."

Two sides of a question. In the 1930s, the fact that Judge Hardy was a judge made him virtually unassailable — thoughtful, wise, all-American rectitude made flesh. Somewhere along the way — in Hollywood at least — judges lost a bit of the rectitude.

The farce What's Up Doc? (1972) featured a judge who'd adopted the rhythms of vaudeville, a precursor of sorts for Fred Gwynne's small-town, accent-perplexed judge, who interrupts youth-defending attorney Joe Pesci in My Cousin Vinny (1992) to ask "what's a yute."

And they're both descendants of a comic tradition that goes back at least as far as the Marx Brothers ... Groucho having picked up a gavel in Duck Soup (1933), remember, to suggest that Chico be sentenced either to "10 years in Leavenworth or 11 years in Twelveworth."

Being held generally in high esteem, judges — like anyone on a pedestal — become targets to be knocked down, which is another way of saying Hollywood's depiction of judges has been just as complicated as the public's perception of judges.

Hollywood's version is easier to read, though, especially in terms of tone. When Groucho played a judge, no one thought he was mocking the judiciary. He was just being Groucho.

Something slightly different is going on in, say, Miracle on 34th Street (1947), when a judge caves to public opinion and recognizes the existence of Santa Claus. Still a joke, but this time it's a judge who's caving, not a comedian.

And something far more "judgmental" is happening a few decades later in The People Versus Larry Flynt (1996), about the rabble-rousing publisher of the adult magazine, Hustler. In that film, the producers gave the real Larry Flynt a cameo as an appellate judge. He got to sentence himself, as it were, in a film where the whole point was that the judiciary kept getting first amendment freedoms wrong.

Often, you can tell what filmmakers think of judges by looking at whom they cast as judges. In Anatomy of a Murder (1959), arguably the most riveting courtroom drama ever, the judge is played by real-life attorney Joseph N. Welch, famous off-screen for facing down Sen. Joseph McCarthy during his communist witch hunts with an impassioned, "Have you no sense of decency, sir?"

Director Otto Preminger knew the way to give his non-actor a big moment in that sort of company, was to pause in what was becoming a rush to judgment. Asked a rapid-fire question, the judge flips open his pocket watch, winds it, and with great deliberation, makes up his mind.

The pause encapsulates what judges are supposed to do — step back from the fray, look at things impartially, and render their considered judgement.

Anatomy of a Murder came out at a time when the federal judiciary was respected as much as it has ever been. Not universally, mind you. Under Chief Justice Earl Warren, the Supreme Court had handed down a number of controversial decisions, including the one that outlawed racial segregation in public schools. That meant there were "Impeach Earl Warren" signs on many lawns, but it also meant that the power of the judiciary to change society was on vivid display.

Hollywood harnessed that power in early 1960s courtroom dramas — Inherit the Wind (1960) about the Scopes "Monkey" trial and evolution, To Kill a Mockingbird (1962) about racial prejudice, and the classic Judgment at Nuremberg (1961), in which Spencer Tracy presides over a military court holding Nazis accountable for crimes against humanity.

The accused are themselves judges, guilty, as Burt Lancaster's Judge Janning notes on the stand, of being swept up in a national hysteria.

"There was a fever over the land," says Janning. "We were a democracy, yes, but it was torn by elements within. Only when you understand that, can you understand what Hitler meant to us. He said be proud to be German. There are devils among us, communists, liberals, Jews, gypsies."

It was the ancient story of the sacrificial lamb, he continues, going on to explain how judges, sworn to protect society from barbarism, convinced themselves that barbarism was the lesser of two evils:

"Why did we take part? Because we loved our country. What difference does it make if a few political extremists lose their rights? The country is in danger."

Other movie judges have been swayed by love of country, or love of God, rather than insisting on the primacy of the law. In A Man for All Seasons, which was released that same decade, Sir Thomas More, an English philosopher now venerated as a saint, challenges both his king and his church, eventually losing his head for arguing that the law must be paramount.

"What would you do?" he asks a prelate, "cut a great road through law to get after the devil?"

Assured that his opponent would "cut down every law in England" to do that, he responds, "And when the last law was down and the devil turned 'round on you, where would you hide with the laws all being flat? This country is planted thick with laws from coast to coast — man's laws, not God's — and if you cut them down ... do you really think you could stand upright in the winds that would blow then? Yes, I'd give the devil benefit of law for my own safety's sake."

The great Paul Scofield won an Oscar playing More. Not all movie magistrates live up to his standard, of course. Film genres require different approaches from say, an action hero like Judge Dredd, or a "toon," like Roger Rabbit's nemesis, Judge Doom.

But serious dramas still lean heavily on the probity and respectability of judges. In the movie Amistad (1997), when Steven Spielberg needed someone to read the Supreme Court verdict that set a slave-ship's passengers free, he called on a real Supreme Court justice: Harry Blackmun. (You can hear Blackmun's reading here.)

Judging judges is not in my brief, as it were, but in cinematic terms, there's little question that this guy's judicial bearing sounds like the real thing.