Accessibility links
Book Review: 'All Grown Up,' By Jami Attenberg Jamie Attenberg's newest novel follows a woman living her life unapologetically, and on her own terms. But that kind of life can is not necessarily a good one. 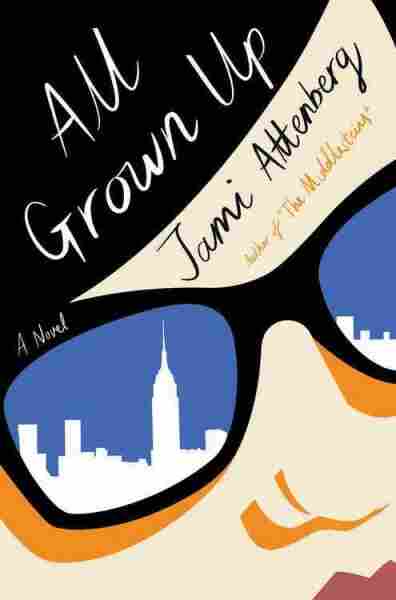 Here it is again. The voice. The single white woman in New York figuring out her s- - - and drinking too much wine voice. Confessional, casual, brash, tell-it-like-it-is, flawed-yet-familiar, ostentatiously relatable.

Sometimes I feel like we've all made some blood pact to call this voice original and brave 20 years since it's been either. In fact, All Grown Up is a book so of the zeitgeist that if you took it onto the G train it would just dissolve and merge with the air. In the past few years, it has become one of the voices I encounter most, a voice that seems to demand that I identify with it. Live life unapologetically! the voice cries. Indulge yourself but judge others relentlessly! the voice cries. Throw off the accoutrements of conventional domestic life while still reinforcing the systems that underlie it! the voice cries.

Every page of All Grown Up seems to ask its readers to hop on the Let's order the bottle — we deserve it bandwagon and congratulate its writer for being "brave." But should any of us really live life unapologetically? The truth is that we can't decide to live life purely on our own terms: other people have competing and overlapping terms, and some of them we cede to (say, sick family members who need care) and some of them we don't (say, arbitrary gender expectations). Life (and good fiction) exist in those negotiations.

So go ahead: be proudly single. But don't mistake it for being unattached.

Andrea Bern is an unmarried former artist in her late thirties, now working in advertising. She moves home after dropping out of art school — this part is written in the second person — and her brother's girlfriend gets her a job. "You acknowledge your privilege, and you get to work." This opening is meant to signal a right-thinking book. This performative privilege check on page one — like it is a coat you must store before the show — tells us a lot about this character, whose empathy is so meager that it appears in feeble gestures, in acknowledgments of other people's hardships but no stake in them. To "check one's privilege" is a gesture of self-sanctification that helps no one, unless it is followed by reflection and then by action. Here, it is not. That gesture is typical of this heartless book that goes around boasting about its heart.

Andrea's niece is born with a fatal illness, but this dying baby only functions in the novel to illustrate points in Andrea's journey. She airlifts other people's tragedies in to give her own life pathos: she is the kind of person who lists other people's grief among injustices to themselves, without doing anything to help. "My brother had a sick baby and my mother was depressed and I hated my job in addition to significant other features of my life" she complains at one point, and then promptly stops visiting her family.

This book is attractive in several ways: the reading is so easy you slide through it like a knife through butter. It's occasionally witty. The structure is surprising and original. Attenberg has written something like overlapping short stories that reintroduce information we already have as if it is new, but with new emphases and nuances. It mirrors the way we tell our own stories, reshading them to fit the circumstances, cutting this, adding that to make the narrative we're using for our ends.

The Voice isn't always shallow: I read and loved deeper versions of it in Emily Gould, Lena Dunham, and Maria Semple (two of whom blurbed this book). All four authors ask how to be happy — but Gould, Dunham, and Semple go on to ask how to be good.

All Grown Up purports to defend something legitimate and defensible – i.e., not having a spouse or children — but actually seems to promote something indefensible — not being at all responsible for other people. Humans, even solitary ones, have inherent stakes in other people. It's hard not to compare All Grown Up to books like Olivia Laing's (nonfiction) The Lonely City, which is also about a single, creative, ambitious, and lonely woman in New York City, but is achingly humane in its understanding of loneliness, not merely someone's idea of "relatable." Andrea allows other people to take care of her — her sister-in-law houses her, gets her clean, and finds her work — but seems to think independence means not returning the favor, except perhaps to show up at the very end, once her sister-in-law has lost everything, to cadge some reflected tragedy off a dying kid.

In the end, All Grown Up is a stylish book based on a series of mistakes: that being single means being unattached, but also that that self-loathing is the same as self-reflection, brashness is the same as bravery, that announcing your faults exonerates you, that being charming matters more than being kind, and that our own personal fulfillment is paramount.