Accessibility links
Here's What's Become Of A Historic All-Black Town In The Mississippi Delta Founded by former slaves in 1887, Mound Bayou, Miss., was one of the country's first all-black towns. Here's a look into its historic past and uncertain future. 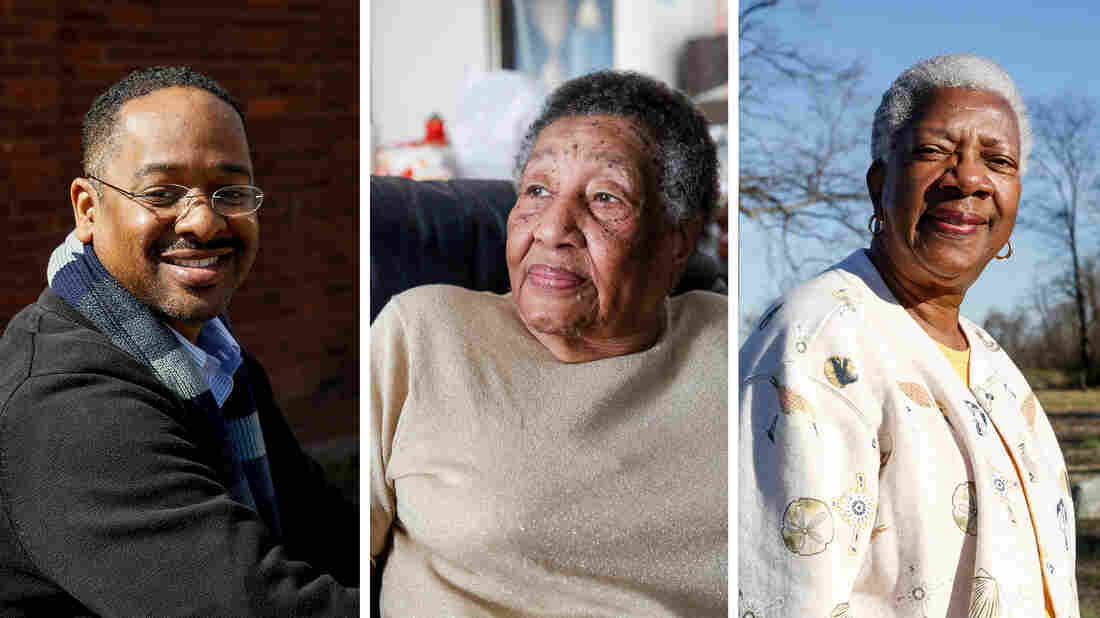 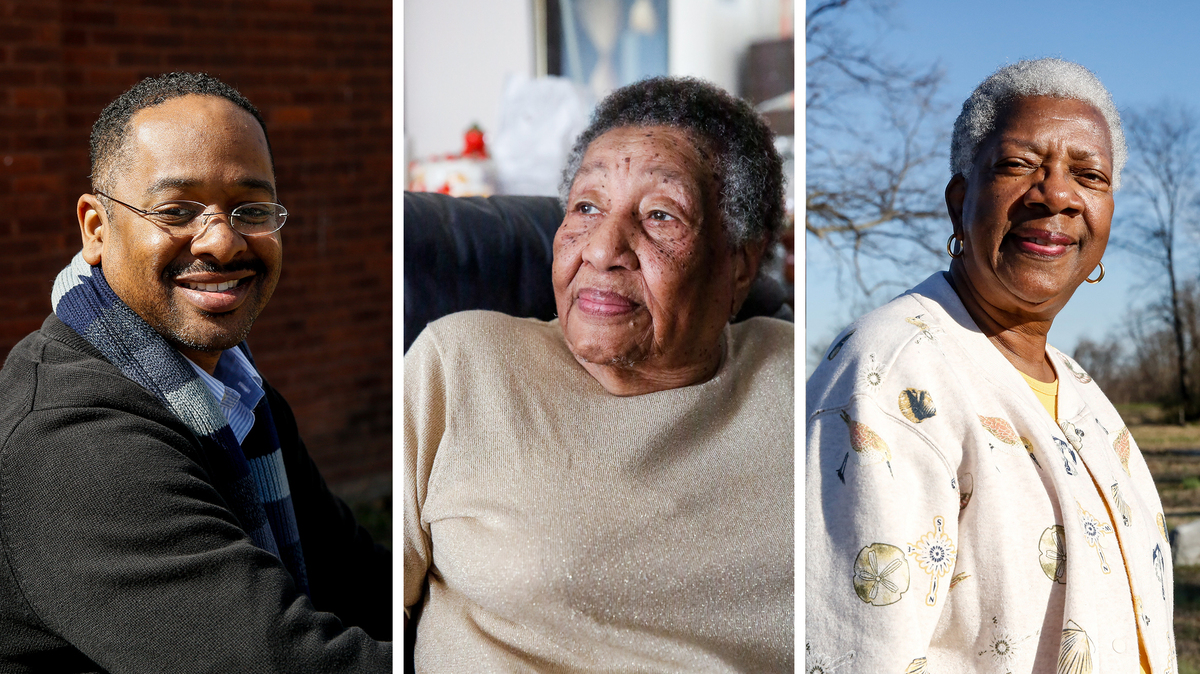 (From left) Rolando Herts, ‎director of the Delta Center for Culture and Learning at Delta State University, Annyce P. Campbell, 92, and Eulah Peterson, 68, both from Mound Bayou, Miss.

Teddy Roosevelt proclaimed it "The Jewel of the Delta."

Booker T. Washington praised it as a model of "thrift and self-government."

Mound Bayou, in the Mississippi Delta: a town founded in 1887 by former slaves, with a vision that was revolutionary for its time.

From the start, it was designed to be a self-reliant, autonomous, all-black community.

For decades, Mound Bayou thrived and prospered, becoming famous for empowering its black citizens. The town also became known as a haven from the virulent racism of the Jim Crow South.

"It's almost like it was an inverted or alternate universe, where being black was a positive thing," says Rolando Herts, director of the Delta Center for Culture and Learning at Delta State University.

I came to Mound Bayou both to learn about the unique history of the town and to see what has become of it today.

A drive through town reveals a place that has fallen, hard. There are just a few businesses left: a convenience store, a gas station, a funeral home.

The population is down below 1,500, a fraction of what it once was. More than half the children in Mound Bayou live below the poverty level.

So what happened? "I think desegregation happened," says Herts. "This is a case we've seen across the country in which black communities, people who had more options, left those communities to move to the suburbs, or to move to urban areas with more opportunities, and took their know-how and their resources with them."

But stop for a moment and imagine the Mound Bayou that was, and to picture what a remarkable feat it was to build this town in the first place.

Back in 1887, the founders — freed slaves Isaiah T. Montgomery and his cousin, Benjamin T. Green — bought 840 acres of Mississippi swampland that was covered with dense hardwood forest.

According to Booker T. Washington's account, published in 1907, Montgomery led the first small group of prospective black settlers there by train: 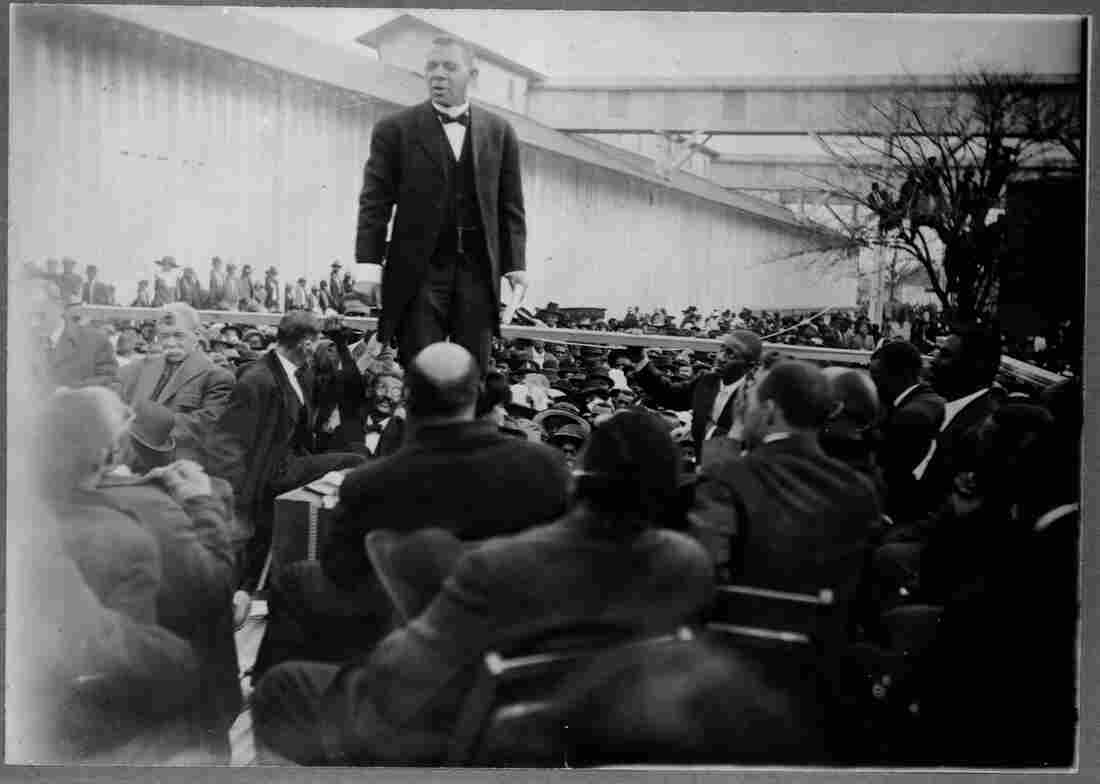 Educator and reformer Booker T. Washington talks to a crowd at the dedication of a cotton seed mill in Mound Bayou, Miss. Library of Congress/Corbis/VCG via Getty Images hide caption 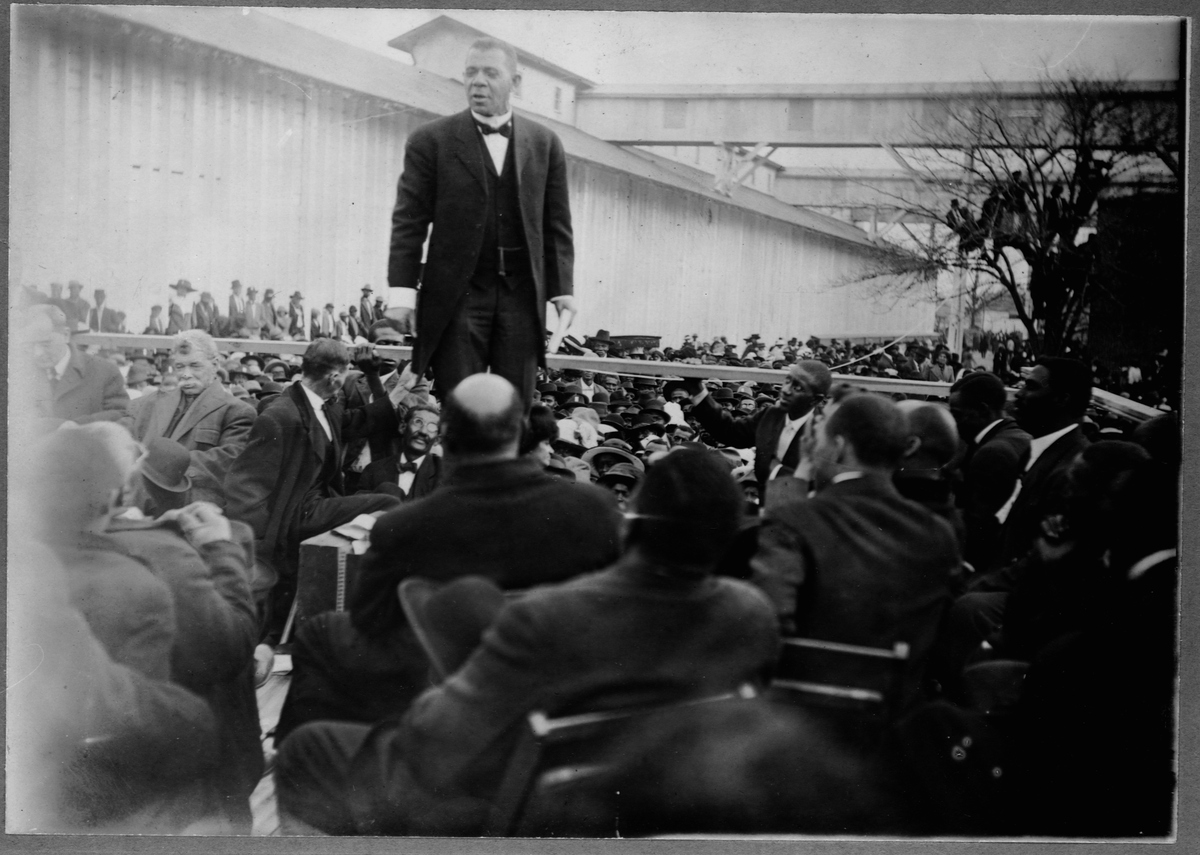 Educator and reformer Booker T. Washington talks to a crowd at the dedication of a cotton seed mill in Mound Bayou, Miss.

"You see," he said, waving his hand in the direction of the forest, "this is a pretty wild place." He paused, and the men looked hesitatingly in the direction he had indicated, but said nothing.

The men picked up their axes and attacked the wilderness.

It was back-breaking work, but they succeeded. Mound Bayou became prime cotton land, and word spread of the economic opportunity there.

It was not the ordinary Negro farmer who was attracted to Mound Bayou colony. It was rather an earnest and ambitious class prepared to face the hardships of this sort of pioneer work. The scheme was widely advertised among the Negro farmers throughout the state and drew immigrants from all parts of Mississippi, and a certain number from other states.

As Herts tells me: "They wanted the best of the best. They wanted the most highly educated people who were entrepreneurial, who were going to come in and contribute something to making this community even more competitive, even better."

By the time Annyce Campbell was born in Mound Bayou in 1924, the town was thriving. "You name it, we had it!" she tells me proudly. "We had everything but a jail, to tell you the truth!" 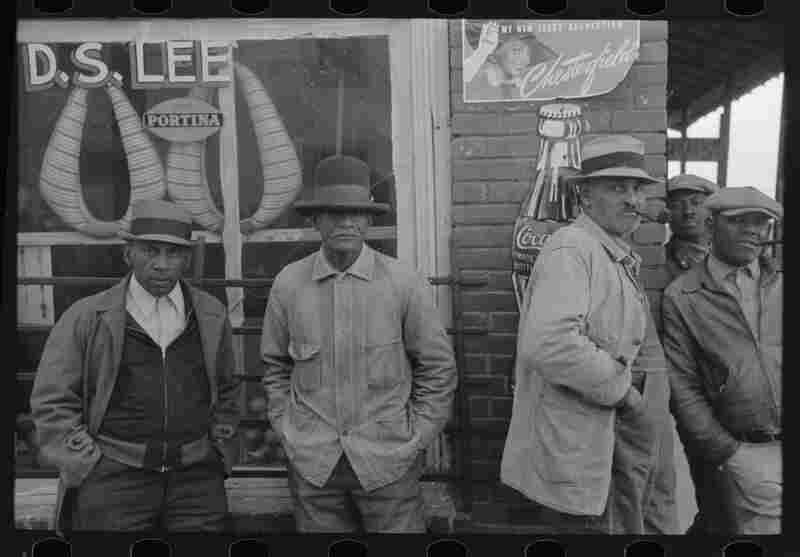 Folks in front of a general store in Mound Bayou, 1939. Russell Lee/Library of Congress; The Crowley hide caption 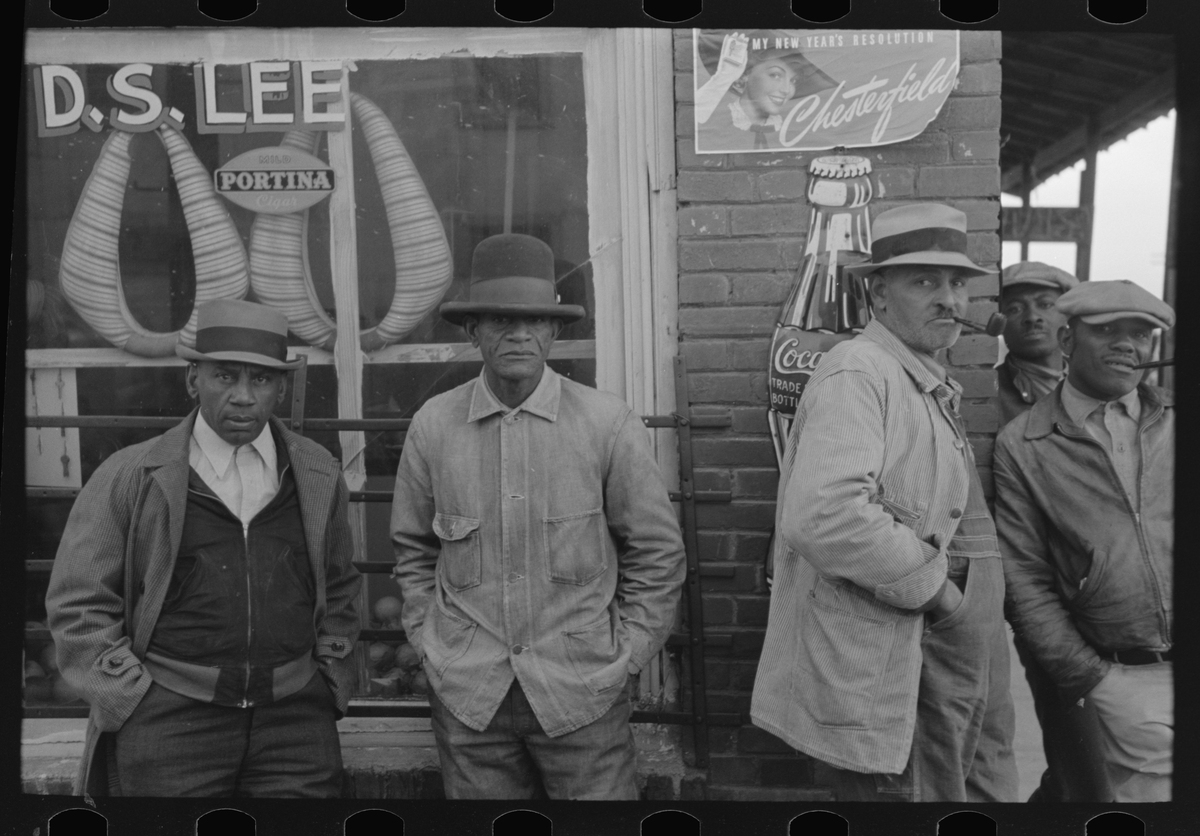 Folks in front of a general store in Mound Bayou, 1939.

Russell Lee/Library of Congress; The Crowley

The 92-year-old Campbell clearly recalls the heyday, when Mound Bayou was home to dozens of businesses, three cotton gins, a sawmill, a cottonseed oil mill, a bank — all of them black-owned.

By 1942, Taborian Hospital opened, serving blacks from all over the Delta.

Herts, of Delta State University, points out how revolutionary that was for the time: "Just being able to walk through the front door of a hospital and immediately receive the care that you need. Not having to go through a back door. Not having to wait for the white patrons to get their needs serviced first. That happened here in Mound Bayou."

Taborian Hospital is shuttered now. The home of Mound Bayou's founder, Isaiah Montgomery, is abandoned, its foundation cracked and crumbling. 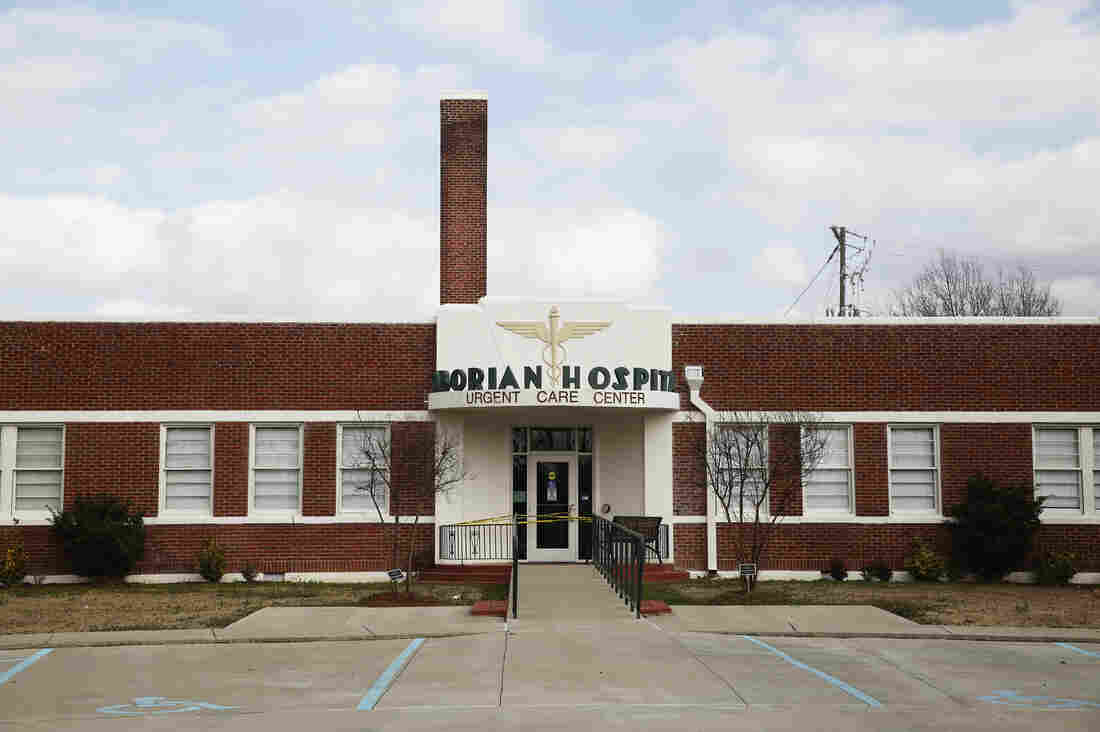 Taborian Hospital opened in 1942, serving blacks from all over the Delta. It is now closed. Elissa Nadworny/NPR hide caption

Montgomery and his co-founder, Benjamin Green, are buried in a small cemetery in town.

Every year, people gather graveside for Founders' Day, with a memorial service and wreath-laying. "It gives us an opportunity to pause and reflect on the founding of Mound Bayou," says Eulah Peterson, 68, who was born and raised in Mound Bayou.

"This was certainly a big undertaking in 1887," Peterson continues. "We were, what, 32 years from slaves being freed. Some 130 years later, we're still here. While we're not where we'd like to be, we're still here."

Peterson's family roots in Mound Bayou go back to 1903. Her maternal grandfather, born into slavery, was 7 when the slaves were freed. He and Peterson's grandmother moved to Mound Bayou from Louisiana, attracted by the promise of this "utopian society," as Peterson puts it.

Eulah Peterson moved back to Mound Bayou once she retired, after spending nearly two decades away.

"People said, 'Why are you going home to Mound Bayou?' and I said, it's because Mound Bayou is close enough to anything that I want to do and far enough away from anything I don't want to be bothered with."

Peterson is a former alderman and vice mayor, and is now running for mayor.

I ask if it saddens her to think about what Mound Bayou used to be, and what it is now.

Peterson envisions the Mound Bayou of the future as a retirement community, attracting more people who moved away but want to come home and help revive their hometown.

"I've not given up on the thought that we can get more people who are willing to come back to Mound Bayou."

In a previous Web version, Eulah Peterson was misidentified as Eulah Campbell.