Accessibility links
On Obamacare Replacement Plan, Freedom Caucus Members Face Crossroads Members of the House Freedom Caucus and their allies are rebuking the Republican leadership's health care bill, but many of their constituents voted for President Trump. Can the lawmakers be swayed? 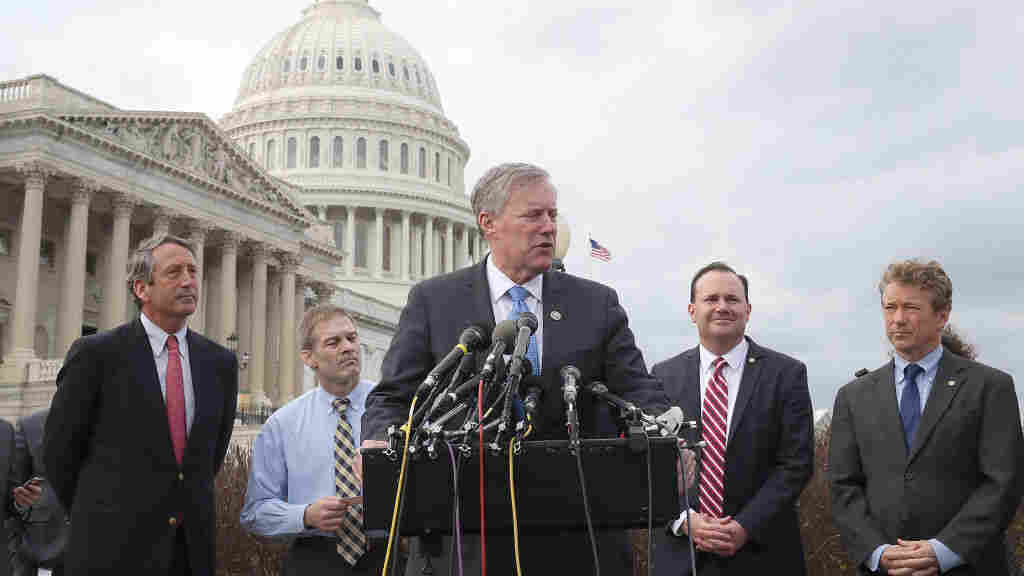 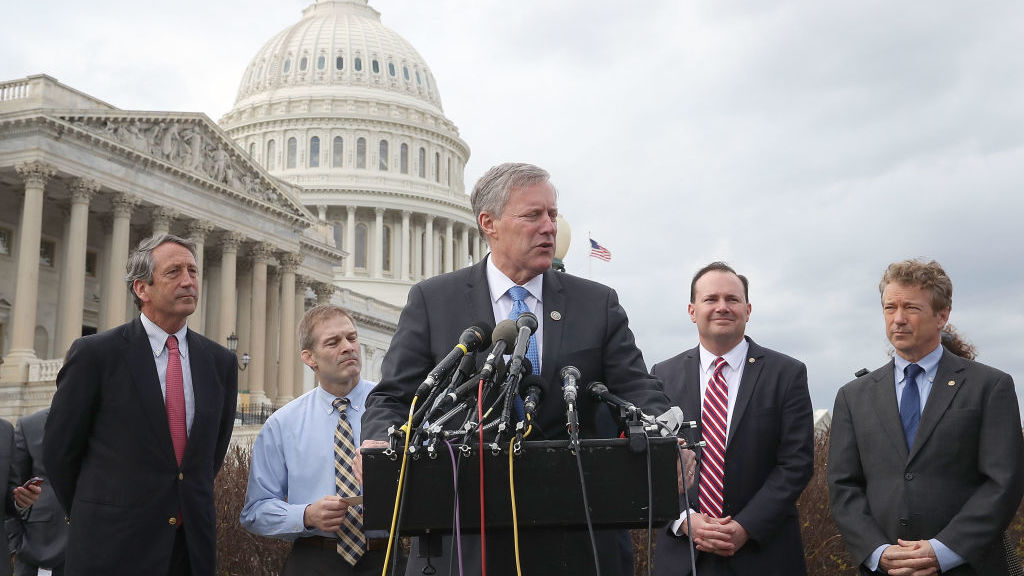 Rep. Mark Meadows, R-N.C., chairman of the House Freedom Caucus, speaks out Tuesday against the GOP leadership's plan to repeal and replace the Affordable Care Act, flanked by fellow Republican Reps. Mark Sanford of South Carolina (from left) and Jim Jordan of Ohio as well as Republican Sens. Mike Lee of Utah and Rand Paul of Kentucky.

Some of the most conservative members of the House are at a crossroads over the plan from GOP leadership and the White House to replace the Affordable Care Act. Those lawmakers say their choice is between supporting a bill that goes against many of their principles, or falling in line behind President Trump — who won overwhelming support in their district.

"Do we need to lower the bar in what we believe as conservatives simply because a Republican is in the White House?" asked House Freedom Caucus member Mark Sanford, a Republican from South Carolina.

The overwhelming answer from members of the conservative caucus and other major outside conservative groups is no — at least right now.

But there are reasons that President Trump, Vice President Pence, House Speaker Paul Ryan and others sound confident. For a president who built his career on being a master negotiator, it's now his job to sell these skeptical members on the merits of the bill — and the breadth of his win in their districts shows there could be fertile ground to do so.

The president has repeatedly underscored that he believes he has a mandate to overhaul health care, given his win last November and GOP sweeps in Congress. In the areas that belong to those holding out on the replacement bill, Trump won, as he would say, "big league."

Trump carried the districts of the House Freedom Caucus members by an average margin of about 26 points. He won more than 20 of these districts by 20 points or more and carried 27 of them by double digits.

Yet the lawmakers almost all won their races comfortably, too — allowing them to claim a mandate from constituents just as Trump has. Lawmakers could even argue they have more purity on the issue, given Trump's fluctuations on enumerating exactly what he wants in a health care bill and lack of specifics during the campaign.

The GOP can still pass the American Health Care Act even if it loses as many as 20 votes — or more, if any Democrats change their minds.

Looking at it another way, Trump needs to woo only 10 of these conservative members over to his side — but that also assumes other GOP centrists stay on board too. Ultimately, as the White House said on Wednesday, the president is prepared to do everything he needs to do to get there.

Analysis: GOP Health Plan May Not Fix The Problems They Want To Fix

"We are out in full sell mode all around the country, talking about how we think this is the best way to solve the problem that the American people face and why we believe that the solutions that we put forward in this bill are the right ones and that will benefit them," White House press secretary Sean Spicer told reporters on Wednesday.

Members of the Freedom Caucus could still be swayed, as even the group's chairman confessed on Wednesday.

"I would be the first to admit that calls from the president will certainly influence members and to suggest otherwise would be to ignore politics," Rep. Mark Meadows of North Carolina told the Associated Press. "Whether you fully supported Donald Trump or not, getting a call from President Trump obviously makes a difference."

Trump Supports GOP Health Care Plan, But It Isn't Everything He Wants

Plus, some of Trump's top lieutenants selling the bill once served in the House, where they had plenty of conservative bona fides. Pence spent 12 years there as a representative from Indiana; Health and Human Services Secretary Tom Price just left his position as a Georgia representative; and Office of Management and Budget Director Mick Mulvaney was a South Carolina representative before Trump plucked him for the job. Mulvaney has already invited members of the Freedom Caucus to join him for a bowling night at the White House next week.

Still, there are some long-simmering tensions evident in the conservative backlash to the new bill. Most members of the Freedom Caucus came around on Trump during the campaign, even if many did not initially support him. Yet the divide over health care underscores the skepticism some conservatives still have with the White House and GOP leadership.

Conservative critics want a clean repeal of the Affordable Care Act, also known as Obamacare, and say that this new replacement plan does not comport with their principles. Among the issues they have with the bill is the tax credits the new plan provides, which could actually result in a rebate from the IRS to cover premiums, and the delay in doing away with the original law's Medicaid expansion program.

This is the young White House's first real legislative challenge, and it's one that could still be tough for a president who entered office without any legislative or government experience.

Trump expressed optimism on Tuesday that "everybody" would eventually support the House bill he has now thrown his weight behind — even as members of the House Freedom Caucus and their allies on the Senate side held a news conference to malign the bill.

Trump's popularity has fallen since he took office, but he is still viewed favorably in the most conservative areas of the country. Trump himself seemed to acknowledge that could drastically change: He reportedly told House Republicans that the 2018 midterms could become a "bloodbath" if they fumble this health care bill.

At the same time, political action groups like the Club for Growth say they would use the vote in scoring how conservative a member is; a vote for the bill could mean a lower ranking, and more vulnerability for a primary challenge.

The Koch brothers-backed Americans for Prosperity says the members who stand up to oppose the new bill will have its full support going forward.

"From our perspective, bad policy equals bad politics as well," the advocacy group's CEO, Luke Hilgemann, told NPR. "This proposal needs to go to the ash heap of history, as does Obamacare."