Accessibility links
Book Review: 'The Erstwhile,' By Brian Catling The second installment of B. Catling's trilogy is full of oddities and quirks and familiar characters. 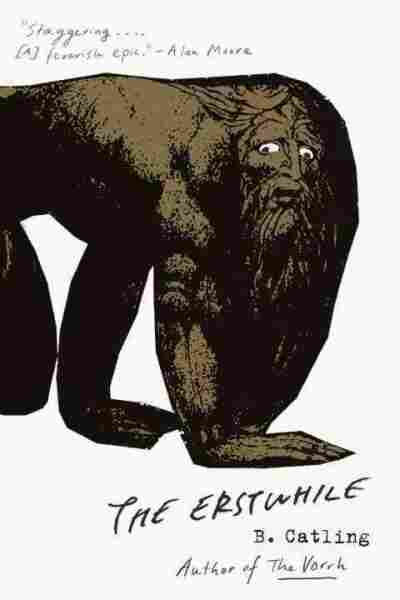 Title
The Erstwhile
Author
B. Catling

In B. Catling's mind-bending debut novel, The Vorrh, a host of impossible creatures populated a mysterious, fictional forest in the heart of Africa in the years following World War I. There was a cyclops named Ishmael. There were plastic robots called the Kin. There was a bow made from the body of a shaman. And there was the Vorrh itself, a mythic woodland which might have harbored the Garden of Eden at its heart, and which was sentient and antagonistic toward humans; they suffered "a dismal erasure of mind" — that is, a destructive invasion of memory — after spending too long there. Catling's most cryptic creation, though, was the Erstwhile, a race of angelic creatures whose biblical origin was tied to that the Vorrh itself.

From this maddeningly elusive and sumptuous tangle of images and symbols, Catling has chosen the Erstwhile as the focus of the second installment of The Vorrh Trilogy. Following the events of the first book — which included rising tension between the forest and the city of Essenwald, a colonial European settlement on the edge the wood — the eerie Erstwhile have escaped into the world. And many characters from The Vorrh have migrated into The Erstwhile, including Ishmael; Ghertrude Tulp, daughter of a deacon; and the formerly blind Essenwald heiress Cyrena Lohr. In one case, the ghost of a deceased character lingers in the story, not unusual at all considering Catling's heady mix of surrealism and magic realism.

But there's a new protagonist on the scene: Hector Schumann, a German professor of theology who's now a widower and stroke victim living quietly in a retirement home. Coaxed out of his dotage by the presence of the Erstwhile across Europe, he becomes the book's flashpoint — and a solid, sympathetic, uniquely compelling character in a book thick with oddities and curiosities.

Catling finds other ways to ground the weirdness of The Erstwhile. Where The Vorrh took place mainly in its eponymous forest as well as Essenwald — two fictional places teeming with the unreal — the sequel spends more time in the real world as we know it. It's a subtle shift, but a profound one. The Vorrh triumphed and frustrated with its dizzying, disorienting swarm of ideas and ornate language. Those elements still abound in The Erstwhile, but they're used with more moderation, as if Catling — a first-time novelist with The Vorrh — is now meticulously sculpting the clay of his epic tale after flinging it all on the floor in the first book. And for those who read The Vorrh and found it sluggish: keep reading. The pace picks up significantly in this installment. As Hector's arcane investigation quickens and the other characters' arcs twine around his, a more coherent and emotionally gripping — if no less dreamlike — story begins to take shape.

Still, that story is overwhelmingly strange. Real-life historical figures factor into Catling's breathtaking tapestry, including the 19th-century Romantic poet and artist William Blake. It makes perfect sense; the author's concept of the Erstwhile dovetails hauntingly with Blake's visions of Heaven and Hell, and Catling weaves alternate history and retroactive mythmaking into a stunning whole. The Erstwhile's layered imagery and lavish prose can be a lot to delve into: "It was difficult to understand the model because he had been speaking in a vocabulary of shadows," Catling writes at one point, as if cleverly acknowledging his own verbiage-rich tendencies. But he's succeeded at writing a more balanced — and if this can be believed, slightly more conventional — novel this time around, which also bodes well for the trilogy's upcoming finale, The Cloven. At the same time, The Erstwhile doesn't depart radically from the devastating scope and dark spectacle made The Vorrh one of the most arresting fantasy debuts in years — or Catling one of contemporary speculative fiction's most imaginative writers.

Read an excerpt of The Erstwhile