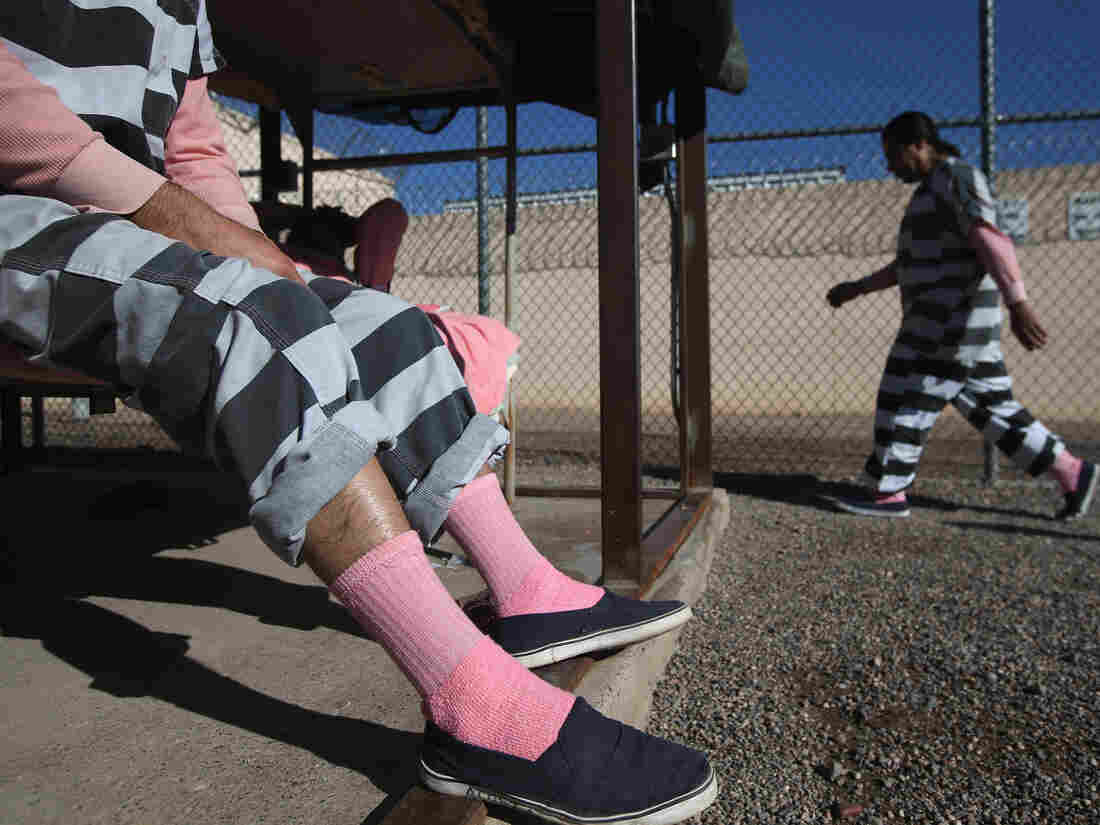 An inmate exercises while another sits on his bunk at the Maricopa County tent city jail for inmates who are in the country illegally on March 11, 2013 in Phoenix. John Moore/Getty Images hide caption 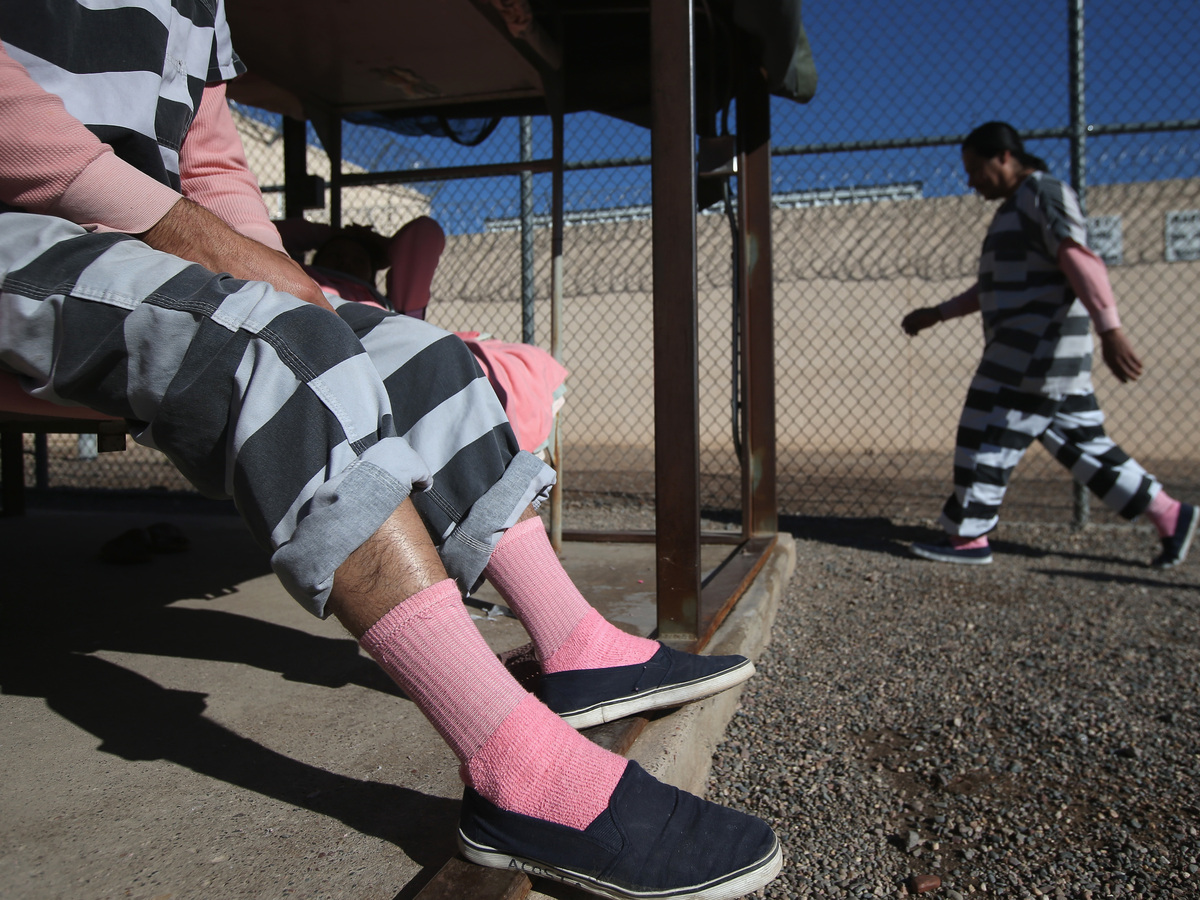 An inmate exercises while another sits on his bunk at the Maricopa County tent city jail for inmates who are in the country illegally on March 11, 2013 in Phoenix.

It's part of his vow to increase deportations of unauthorized immigrants.

It's called the 287(g) program, and nowhere was it put into practice more aggressively than in Maricopa County by former Sheriff Joe Arpaio. Arpaio, who was ousted in 2016, first became renowned for his severe and sometimes demeaning methodology with prisoners — pink underwear and thick, black and white horizontal prison stripes for men and chain gangs for incarcerated women. But it was in immigration enforcement that the sheriff started to acquire a degree of infamy.

It wasn't all that popular nationally — in part because local departments had to pay the expenses for travel and weeks of lodging for their officers to get federal immigration agent training — but it sure was a hit in Maricopa County. By 2007, immigration enforcement had become Arpaio's priority, with 160 of his deputies out raiding businesses and targeting Hispanic neighborhoods around Phoenix. Arpaio also formed what he called his posse: hundreds of predominately white citizen volunteers.

"I was a little aggressive because when I enforce the law, I don't just do it. If you're going to do something, you do it," he says. "And it was working pretty good until they took that away from me."

Arpaio estimates his deputies were responsible for 25 percent of all the unauthorized immigrants detained in the 287(g) nationally during those years. But his aggressive enforcement practices created an uproar in the county's Hispanic neighborhoods.

Alessandra Soler, executive director of the ACLU in Arizona, says the complaints began flooding into their office.

"The federal government gave Arpaio his power, and it turned him into a monster that terrorized our community for years," Soler says. She explains the agreements between Immigration and Customs Enforcement were designed to target unauthorized immigrants involved in criminal activity.

The ACLU and the Mexican American Legal Defense Fund sued Arpaio, accusing him of racial profiling on a mass scale — that brown skin had become enough probable cause for someone to be pulled over and questioned about their legal status. A federal judge eventually agreed with that assessment and participation in the 287(g) program around the country began to wither. But now, Trump wants to reenergize the program.

'It does help us'

One place that might happen is in Pinal County in south central Arizona. Mark Lamb is newly elected sheriff there and is open to the idea. Pinal County currently is participating in the 287(g) program but only on the incarceration side, so his deputies aren't out acting as immigration agents while on patrol. But when Lamb's deputies do arrest an unauthorized immigrant for an alleged crime, the deputies in his jail are trained to ask the right questions.

"That 287(g) allows us to hold those people until ICE can come in and take custody of those people," Lamb says. "It does help us because we're able to protect our community and not put people that are committing crimes back out on the street.

It's this incarceration side of the program that's proved most effective: local deputies trained to ask prisoners the right questions in their jails. The Department of Homeland Security reports it's helped identify hundreds of thousands of unauthorized immigrants. But even in Arizona, the appetite for this is limited.

Mark Napier is sheriff of Pima County, which includes Tucson and shares 125 miles of international border with Mexico. "We have no reason to be involved in it at the Pima County sheriff's department," Napier says.

Napier doesn't want the 287(g) program on his streets or in his jails. It's not needed because he says it's never been a problem getting an ICE agent to come right over and pick up an incarcerated unauthorized immigrant out of his jails.

And with tens of thousands living and working in his county, Napier wants complete cooperation, not fear.

"Let's say that an undocumented immigrant were to witness a bank robbery, get a license plate number or have great information to be able to come for us and help us solve a crime," Napier says. "That person would not be amenable to coming to contact local law enforcement out of fear of deportation."

Napier says he's happy with federal immigration agents doing their jobs and his deputies doing theirs.