Accessibility links
State Republicans Push For More Restrictive Voting Laws Bills to tighten voter ID rules have already been introduced in about half the states this year, where Republican lawmakers say the changes are needed to protect the integrity of the vote. 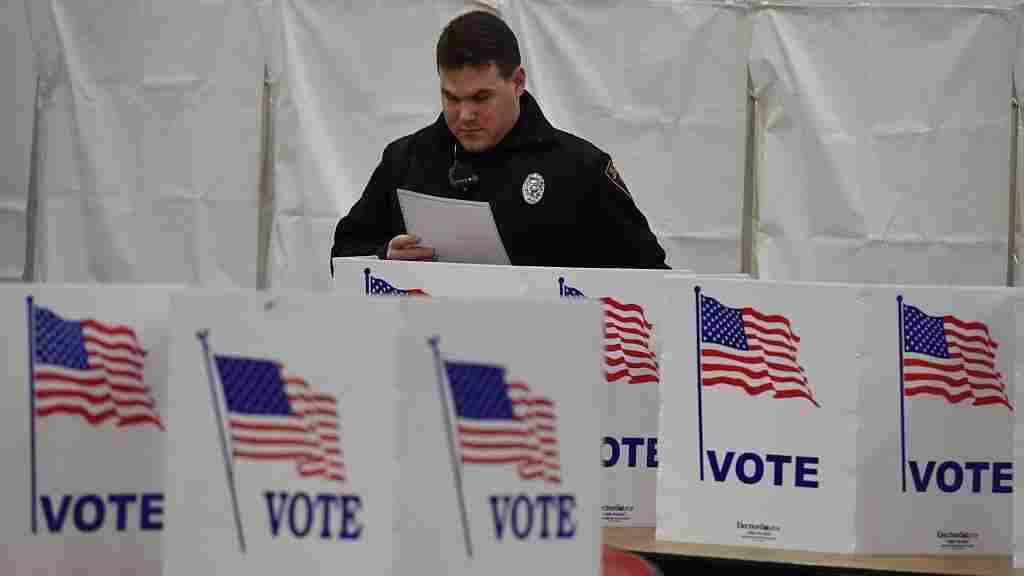 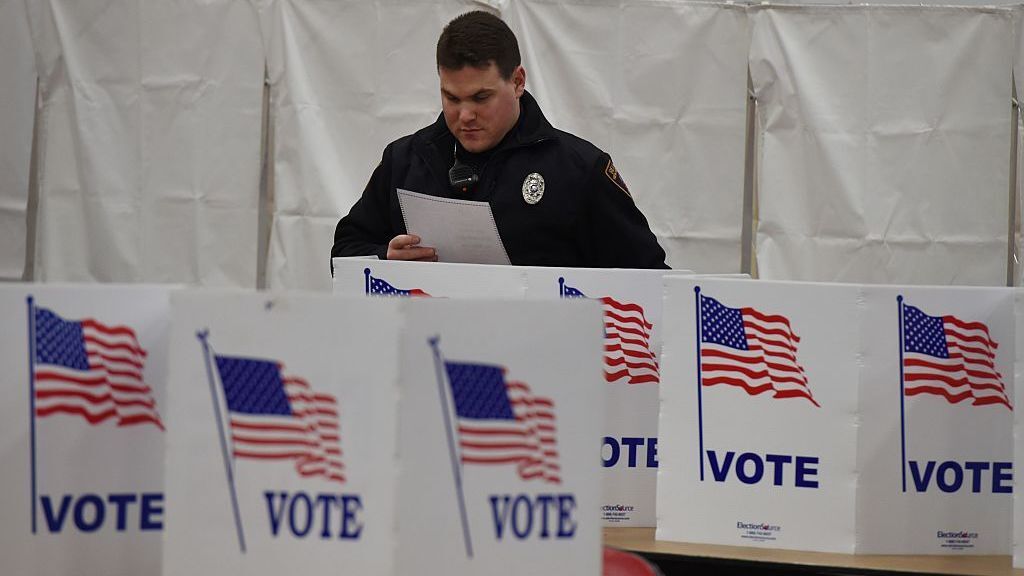 A police officer votes at Belmont High School on Feb. 9, 2016, in Belmont, N.H., during the New Hampshire presidential primary. The state's lawmakers are now debating bills that would tighten residency requirements for new voters.

Vice President Pence has yet to begin a promised investigation into allegations by President Trump that millions of people voted illegally in November. But that hasn't stopped state lawmakers from taking action they say would limit voter fraud, even though the president's claims have been widely discredited.

Legislation to tighten voter ID and other requirements has already been introduced in about half the states this year. And in statehouse after statehouse, the debate has had a familiar ring.

"We do not have a voter fraud problem in North Dakota," Democratic Rep. Mary Schneider argued last month during a state House floor debate of a measure that would tighten that state's voter ID requirements and increase penalties for voter fraud.

"To say that there's not a voter fraud problem in North Dakota, I think that's another inaccurate statement. Maybe there have been no convicted cases but it doesn't mean that we don't have an issue," countered Republican Christopher Olson, shortly before the measure was approved by a vote of 74-16.

In late January, Virginia Republican Bob Marshall argued in favor of a bill that would require voters in that state to provide proof of citizenship before casting ballots in state and local races.

"I've identified individuals who tell me they're not citizens, but they're on the voter database," he argued.

But Democrat Rip Sullivan said such measures will hurt legitimate voters who don't have the required documents.

"We know it to be true, that there will be Virginians disenfranchised by this piece of legislation all because of some concern about voter fraud for which there is no proof," he said. That bill passed the Republican-controlled House, but has stalled in the state Senate, also controlled by Republicans.

Around the country, the issue has split legislators along party lines. Democrats say tighter voting rules are unnecessary and discourage legitimate voters from casting ballots. Republicans say they're trying to assure voters that the system is secure, even if voter fraud isn't as widespread as Trump claims.

"I don't know if there's a lot of cheating. I just know that because of our loose laws, people feel that way," says New Hampshire Republican Sen. Regina Birdsell.

She has sponsored legislation to tighten residency requirements for voters in her state, where Trump recently claimed thousands of Massachusetts voters were bused in to cast illegal ballots. That claim has been widely discredited — including by state Republicans — but Birdsell says her constituents still worry people from out of state can game the system.

"I call it trust but verify," she says.

Her voting bill is one of hundreds now before state legislatures. Most are unlikely to become law, and many would actually expand voter access with things like online voter registration.

But many other bills under consideration would make it harder to vote. Just this week, Arkansas lawmakers agreed to put a constitutional amendment on next year's ballot to require a photo ID at the polls and for those casting absentee ballots. West Virginia lawmakers also considered tightening voter ID rules, and Iowa Secretary of State Paul Pate pushed a sweeping measure that would require voters in his state to show a card with a bar code to verify their identity.

Pate doesn't think fraud is rampant in Iowa but says all the talk of fraud has people worried.

"The public is now taking that perception as a reality," he says. "And my job, and other election officials, is we now have to work extra hard to try to show people all the things we are doing to protect the integrity so they can re-establish the confidence in our voting system. Because when they don't believe their vote counts, then they tend not to go vote. They go, 'Well,why should I vote?' "

Pate insists no voters will be disenfranchised by his proposal. But opponents disagree. They argue that such measures are politically motivated to suppress the votes of those who tend to vote Democratic, such as minorities who often have more difficulty meeting the proposed requirements. And they say it's being done under the guise of fighting voter fraud, which study after study shows is rare.

"Nobody says it never ever happens," says Myrna Perez with the Brennan Center for Justice, which has fought a number of state voting restrictions in court. "The question is not whether or not there's a way we can get the number down to zero. The question is are the efforts that these states are taking to try and prevent this worth who is being disenfranchised in the process."

She believes that it could be hundreds of thousands of legitimate voters. It's a debate being waged with new vigor this year in a number of states.