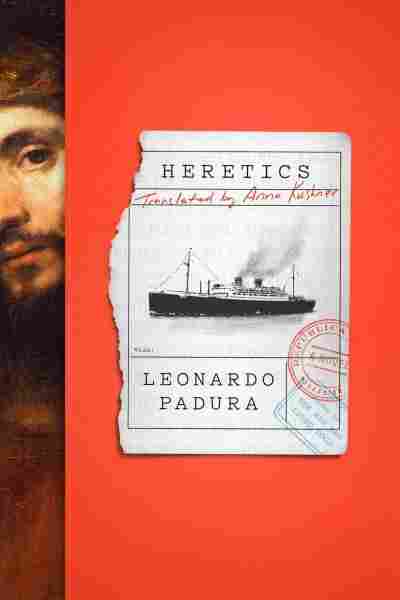 by Leonardo Padura and Anna Kushner

You might say that Heretics, a sprawling novel by celebrated Cuban writer Leonardo Padura, has been in the works since the early 1990s. It was back then that Padura began writing a series of books featuring an ex-police detective in Havana named Mario Conde. Funny and philosophical, Conde, like the sharpest of detectives, devotes more time to investigating the mysteries of his own society than he does to investigating crime.

Padura also writes "straight" literary fiction, too, including his much-praised 2009 historical novel about the assassination of Leon Trotsky called, The Man Who Loved Dogs. Which brings us to Heretics, where Padura has upped the ante.

For over 500 tightly packed pages here, Padura manages to sustain his signature tone of wry, elegant cool as he juggles the demands of a story that oscillates between Cuba in the 1930s and the present, with a long central stop-over in the Amsterdam of the 17th century.

This historical narrative is spliced together with a mystery tale featuring the radiant return of detective Conde. Like Viet Thanh Nguyen's novel The Sympathizer, which won both last year's Pulitzer Prize and The Edgar Award given by the Mystery Writers of America, Padura's Heretics spans and defies literary categories. All of which would only be of ho-hum technical interest if Heretics weren't also an arresting novel about fanaticism, anti-Semitism and the long fall-out of a decades-old moment of political cowardice.

Heretics opens on that notorious moment, which took place in Cuba in 1939. A young boy named Daniel Kaminsky has been living with his uncle in Havana ever since his parents got him out of Poland. On the morning of May 27, Daniel's parents and his younger sister are due to arrive in Havana, along with 934 other refugees from Europe. They're sailing on the S.S. Saint Louis, a boat, as Padura says, that was "loaded [down] with Jews and trust."

Here's Padura's description of the scene at the dock where the Saint Louis sat in bureaucratic limbo:

The port would soon become a sort of grotesque carnival. ... [T]he thousands of Jews living in Havana, ... , had camped out on the docks, ... [B]usinesses and stands had gone up selling food and drink, ... fans and flip-flops. ... The most lucrative business ... was the rental of boats aboard which people with relatives on the passenger ship could get as close to the vessel ... as police and navy launches would allow, to see their family members there and ... to convey some message of encouragement.

Daniel's parents remain optimistic because they carry something with them that they can barter for their freedom: a Rembrandt portrait of Christ. But on June 2, The Saint Louis was ordered to leave Cuba and Daniel watches, stunned, as his family along with the other passengers sail out of the harbor and toward, what will be for many, death. At that moment, Daniel renounces Judaism, decides he's "Cuban and that's it" and thus becomes a "heretic."

The intricate plot revolves around that missing Rembrandt painting — detective Conde is hired some seven decades later to find out what happened to it. It's to Padura's credit that he writes with such gusto, most readers will forget that his novel is built on the old "missing painting" cliché.

Indeed, it's that powerful word "heretic" that's the most crucial link among the many stories here. We hear murmurs of that word in the central tale, set in Rembrandt's studio in Amsterdam where a Jewish apprentice blasphemously poses for that portrait of Christ.

Much later, we also hear the word "heretic" coming out of Conde's mouth as he walks down a street in Cuba in 2008 and surveys teenagers, dressed as Goths, punks, and "emos." Conde, who's in his 60s, thinks resignedly of these young Cubans as the "most remarkable tip of the iceberg of a generation of certified heretics," left with no slogans or politics to believe in.

Cloaked within familiar narrative conventions, Padura's ingenious novel is something of a heretic itself: by turns playful, dark, and moving, it traces the great psychic costs — and rewards — that come from nestling so deeply into dogma that nothing is permitted to trigger doubt. This was the great theme of classic works of the fascist and communist 20th century like, of course, Orwell's 1984. We were supposed to have awoken from those nightmares. But, as Padura reminds us, perhaps we haven't.