Accessibility links
Trump Sells House GOP Health Care Bill By Inviting Conservative Lawmakers Over To Bowl President Trump has been in "sell mode" on the health care bill, and he has invited conservative GOP members of Congress over to the White House bowling alley this week. 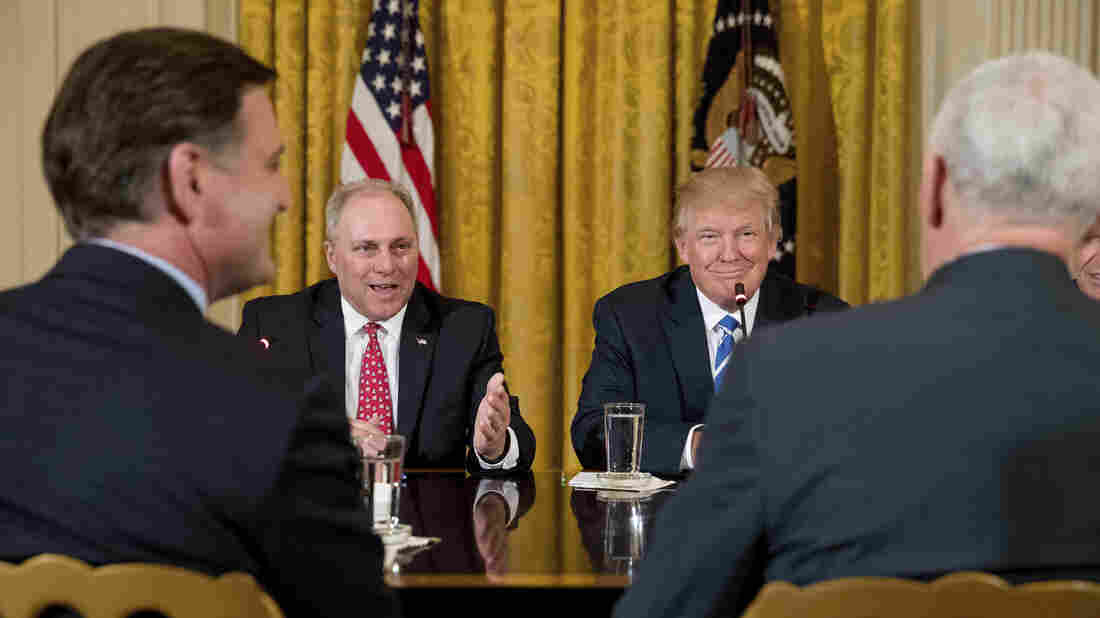 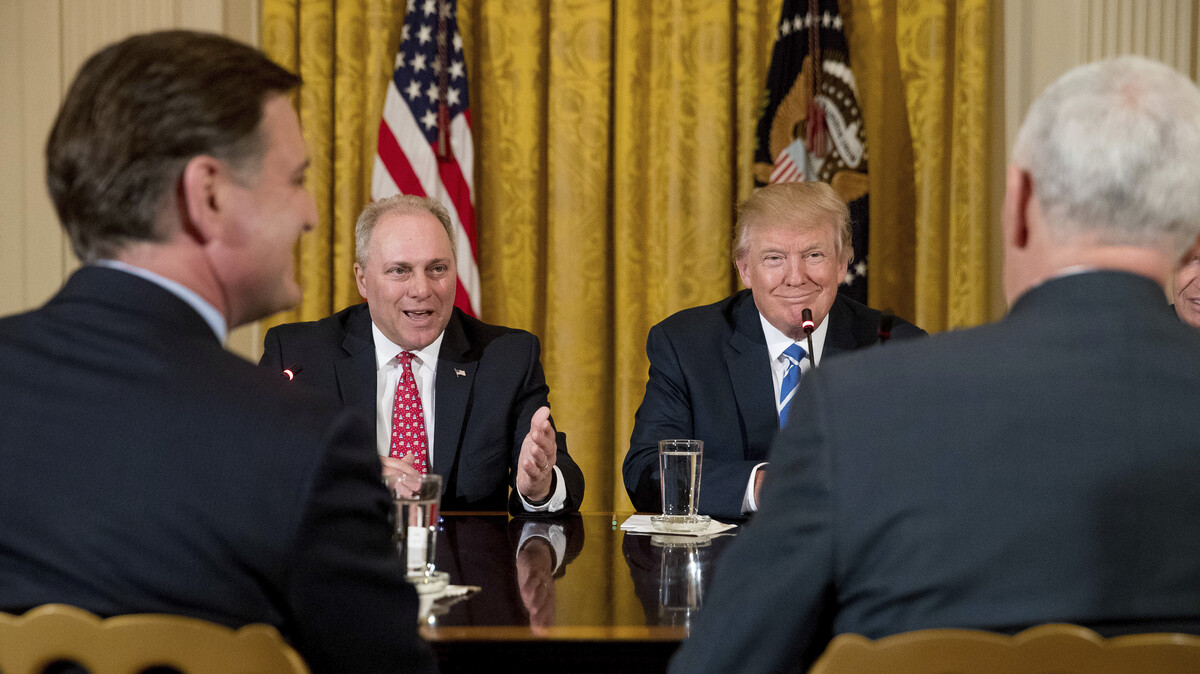 President Trump listens as House Majority Whip Steve Scalise of Louisiana speaks during a meeting with the Republican House whip team about the proposed health bill.

The two-lane Truman Bowling Alley isn't glamorous or grand, but as bowling alleys go, the location is mighty exclusive. It's in the basement of the Eisenhower Executive Office Building, inside the White House complex.

And on Tuesday night it will be the latest backdrop for a high stakes sales pitch to a group of conservative House Republicans known as the Freedom Caucus. They are skeptical of what the president is selling: the American Health Care Act, or as Breitbart called it derisively, "Obamacare 2.0." 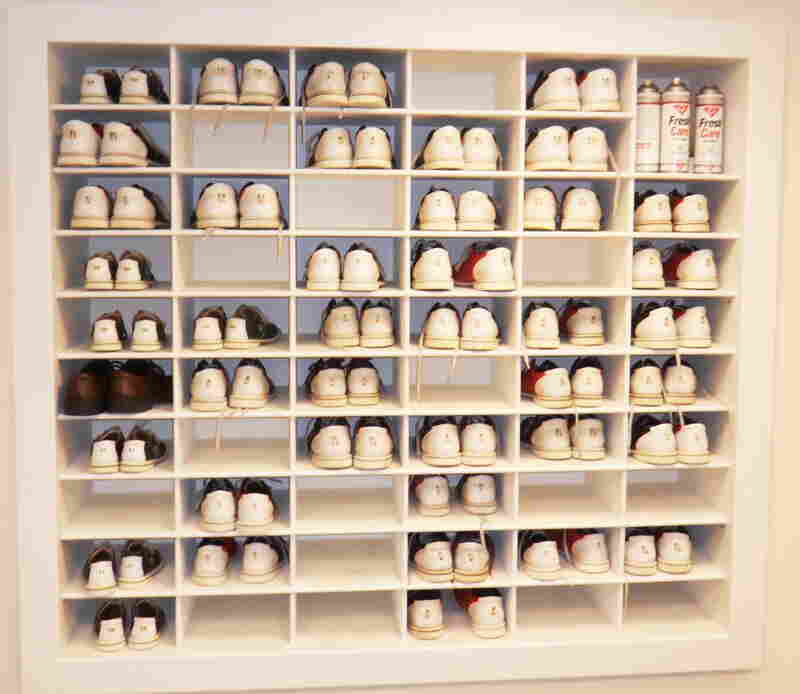 If the roughly 40 members of the House Freedom Caucus stick together and vote against it, the bill will fail. Hence, the charm offensive.

"You know I'm not a bowler," said Rep. Mark Meadows, R-N.C., when asked if he'd be bowling at the White House. I'm going over next Tuesday for pizza and policy — is what I'm calling it — at the bowling alley. How about that?"

Meadows is chairman of the Freedom Caucus, and with a slight Southern drawl, he chooses his words carefully. He went to the White House last Thursday for a meeting with the president and several other congressional conservatives.

"Anytime that you're with the president of the United States, you feel like you're with a guy that you've known for years," Meadows said a few hours later.

Count him as charmed, but not sold. He gives the president an A-plus for listening. The question, though, is whether he'll see any changes to the legislation that reflect his concerns and those of others in his caucus.

Independent analyses of the bill find that for many Americans, especially those who are older and have lower incomes, their out-of-pocket expenses are likely to rise.

Trump and those in his administration insist this bill is just the first stage in a three-stage plan to repeal and replace Obamacare. But the other stages will require the support of Senate Democrats, something that is far from guaranteed. Meadows said he's learned the hard way that people in Washington make lots of promises, but Washington fails to keep them.

"I think [Trump] understands if it was personality driven, most of the Freedom Caucus would already be with him," said Meadows. "Hopefully he knows that it has nothing to do with the respect or admiration that we have for the president as much as it is just real policy concerns."

And those House members considering a "no" vote on the health care bill are getting some encouragement from across the Capitol.

"I'm afraid that if they vote for this bill, they're going to put the House majority at risk next year," Sen. Tom Cotton, R-Ark., said on ABC's This Week. "Do not walk the plank and vote for a bill that cannot pass the Senate and then have to face the consequences of that vote," Cotton urged House Republicans.

Even though President Trump is leading the way on the charm offensive, it's not entirely clear who is leading the horse trading behind the scenes that could lead to changes in the bill. Trump appears to be both hands-on and hands-off at the same time, leaving it to Congress to, as Meadows put it, "work its will." It's not even clear the White House and congressional leaders like House Speaker Paul Ryan are open to making modifications.

It has been presented to Republicans in the House as a binary choice — either you support repealing and replacing Obamacare and you vote for this bill, or you don't.

But this wooing of Congress doesn't stop with the Freedom Caucus. President Trump is inviting so many members of Congress over to the White House, they might want to consider setting up a shuttle from one end of Pennsylvania Avenue to the other. Take last Tuesday when Trump met with two Republican senators. And had lunch with one more, South Carolina Sen. Lindsey Graham.

During the contentious Republican primary, Trump read Graham's cellphone number out loud at a rally that was carried live on TV. Graham got swamped with calls and had to change it.

How good was the meeting with @POTUS?

I gave him my NEW cell phone number.

After his White House lunch, Graham said it went so well he gave the president his new number.

Two days later, Graham was chipper, "So far so good," he said before adding that Trump had already called him on the new number. "I think he's doing a good job of trying to get to know people personally."

After the lunch that day with Graham, Trump met with nearly two dozen members of the House GOP whip team — the members of Congress tasked with getting their colleagues to vote for the health care bill.

"You know he's very good at [it]," Rep. Tom Cole, R-Okla., who was at that meeting, said of the president's wooing members of Congress. "I think actually it's the part of the job he may like the most."

As the representatives introduced themselves, Cole said Trump keyed in on New York Rep. Elise Stefanik.

"It got to her and he said, 'Youngest woman ever elected to Congress.' And then he goes, 'None of the rest of us can say anything like that'," said Cole. "And the whole place burst out into laughter. He was like really engaging." 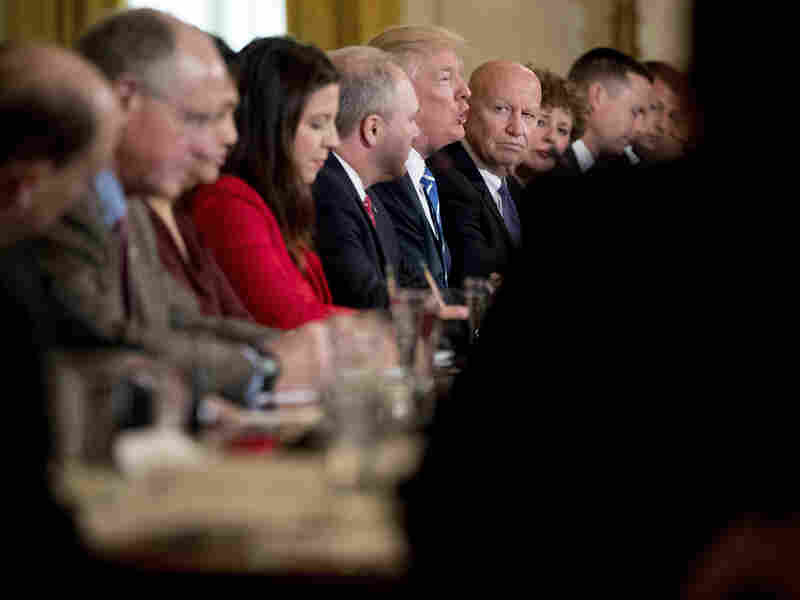 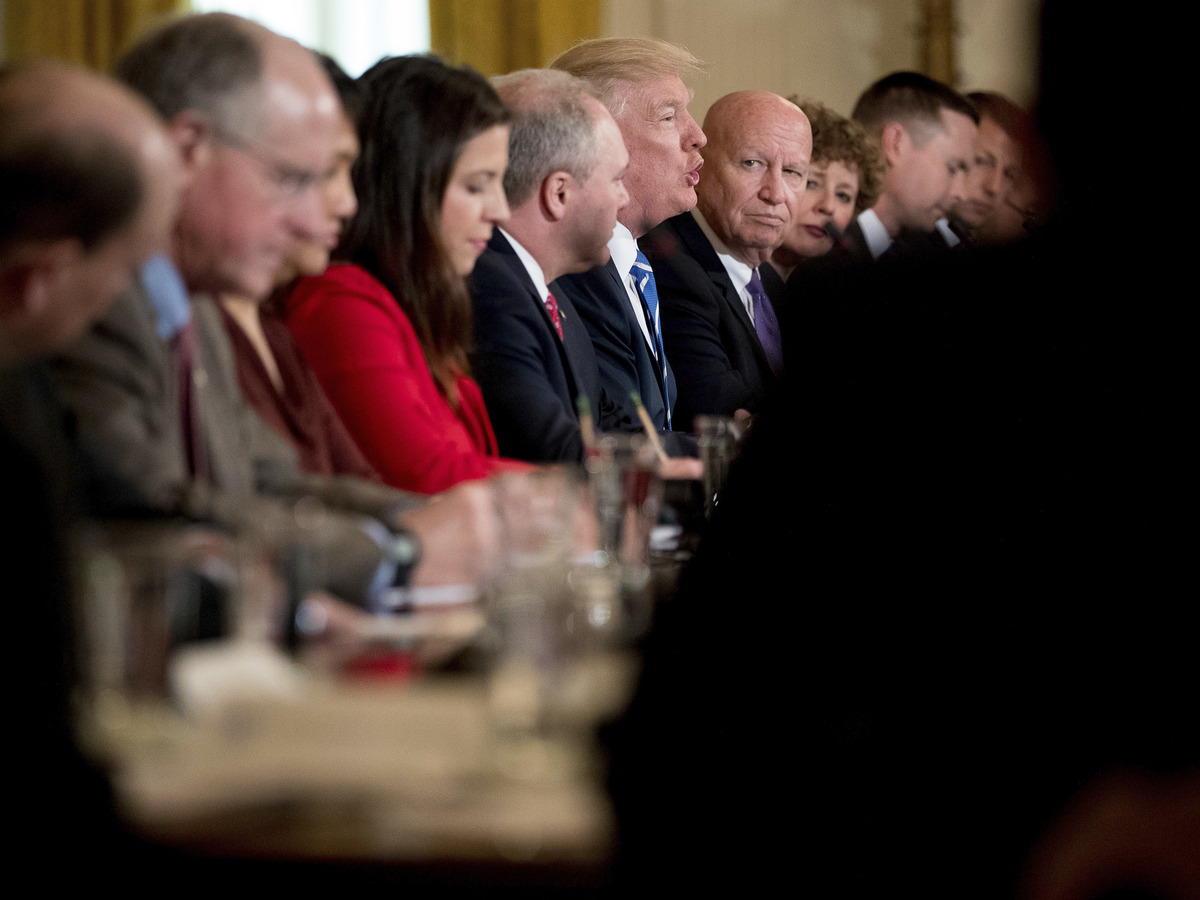 President Trump speaks to the Republican House whip team about the proposed health care bill. Trump highlighted Rep. Elise Stefanik, R-N.Y., (in the foreground) as the youngest woman ever elected to Congress.

Trump told others at the table he had seen them on TV and complimented them.

Cole said this is the kind of thing that can make lawmakers giddy and put them in the mood to help the president. Another thing that can put them in the mood to support the president is his popularity in their districts. For Republicans from deep red districts, there could be a lot of pressure (spoken or unspoken) to fall in line with a president who comes from the same party.

For the majority of House members, this is a new dynamic, one they didn't experience in eight years of the Obama presidency and two years in the minority before that. They aren't in the opposition anymore.

Trump's week of wooing lawmakers — including past adversaries — didn't stop on Tuesday. On Wednesday, he and first lady Melania Trump hosted Texas Sen. Ted Cruz and his wife, Heidi Cruz, for dinner at the White House.

Cruz described the meal as "delightful," which might be an exercise in diplomatic word choice. When asked whether they discussed the comments Trump had made about Cruz's wife and father during the campaign, Cruz didn't respond. He also refused to say what he ate, only saying it was "delicious."

Earlier that day, Trump met with Rep. Elijah Cummings, D-Md., who has often been quite critical of the president from his perch on the House Oversight Committee. They discussed a shared goal of bringing down prescription drug prices. Cummings said Trump followed up with him in a phone call on Friday night.

During the Obama presidency there was a regular complaint that the former president didn't spend enough time personally courting members of Congress. Trump is clearly going in the opposite direction.

"It's not just the fact that you meet," said Graham. "It's the fact that you're listening. I think he's a darn good listener. The thing about him is when you're in the room he puts full attention on you. That's a really good quality."

But passing bills is about ultimately getting votes. And the charm offensive for this health care bill will be the first big test of the persuasive powers of President Trump.