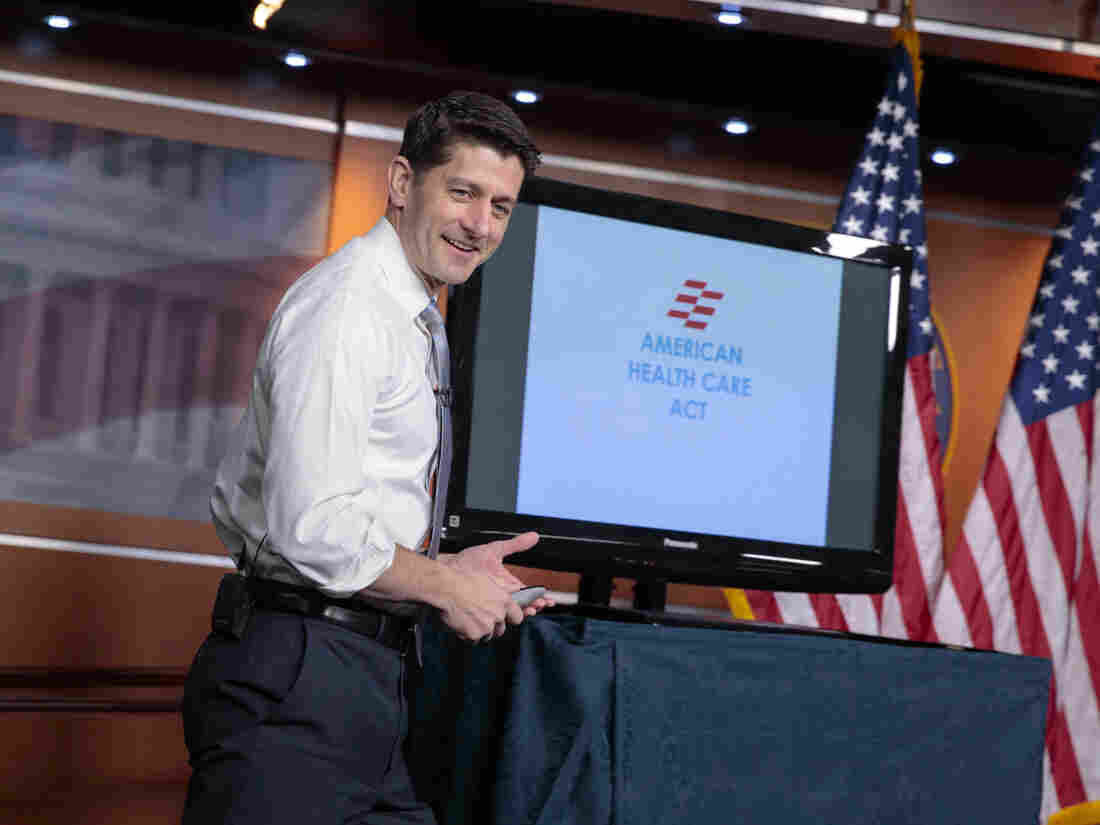 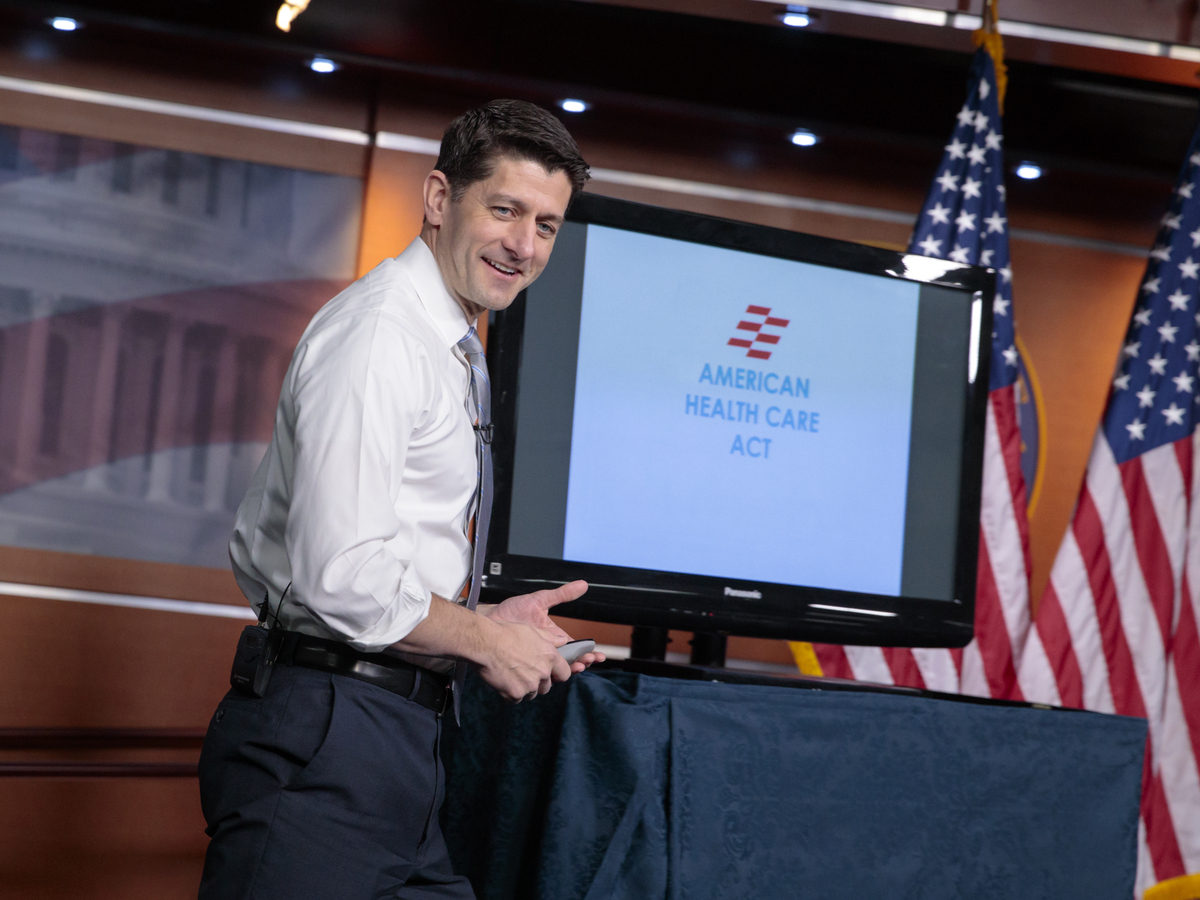 House Speaker Paul Ryan uses charts and graphs to make his case for the GOP's plan to repeal and replace the Affordable Care Act on March 9.

A new report finds that the Republican bill to repeal and replace the Affordable Care Act would reduce the federal deficit by $337 billion over a decade but would also leave 24 million more Americans uninsured during that same period.

The uninsured estimates from the nonpartisan Congressional Budget Office could create even greater political hurdles for the GOP bill. That legislation has already drawn opposition from major interest groups, health policy experts and even some GOP lawmakers. The bill's defenders are touting the lower premiums and deficits that the CBO estimated, but they are also facing questions about what to do about tens of millions of uninsured Americans.

More uninsured, due to Medicaid and mandate repeal

With the current law in place, the CBO estimates, the uninsured count for 2017 would stand at around 26 million. In 2026, that number would remain barely changed under current law — there would be 28 million uninsured Americans if the Affordable Care Act, also known as Obamacare, remained in place. That means the uninsured rate would tick up only slightly, from around 9.5 to 10 percent.

The Winners And Losers In The Republican Health Care Plan

However, if the GOP bill were enacted, the uptick of uninsured would begin this year, to 31 million. By 2026, 52 million would be uninsured under the American Health Care Act, which is the first step in the Republican repeal-and-replace plan. That would bring the uninsured rate from 11.4 to 18.6 percent.

Much of the initial spike in uninsured Americans would come from repealing the individual mandate.

"Some of those people would choose not to have insurance because they chose to be covered by insurance under current law only to avoid paying the penalties, and some people would forgo insurance in response to higher premiums," the CBO wrote.

But overall, a big chunk of that increase in the uninsured comes from Medicaid, as the Republican bill rolls back the Affordable Care Act's Medicaid expansion. In 2026, 14 million fewer people would be enrolled in Medicaid under the GOP health care bill, accounting for half the total increase in uninsureds.

In addition, CBO estimates that the Republican bill would reduce the number of employers offering health insurance, in part because it repeals the employer mandate to provide insurance. The CBO also notes that the GOP plan's tax credits (available only to people who aren't offered insurance at their jobs) would be available to more people than under Obamacare.

That covers the number of people who would be insured under the legislation, but the type of people covered would also shift: Namely, the people in the individual market would skew younger than they would otherwise. That's because younger people would have comparatively more financial help, the CBO explained:

Surgeon On Health Care Bill: The Stakes Are 'Extremely High' For Patients

Obamacare has had difficulty getting enough young and healthy Americans to sign up and help bring premiums down. It appears the GOP plan would shift the balance in the individual insurance market more toward those young, healthy people. But it may not be able to do so while keeping older, less healthy people on board as well.

Premiums would rise, then fall (but not necessarily for everyone)

While the number of uninsured Americans would immediately climb, the trajectory for premiums is more complicated. In the near future, average premiums for single people buying insurance in the individual market would be up to 20 percent higher than they would be under Obamacare.

Importantly, that doesn't mean that everyone's premiums would fall. The GOP's bill expands how much more insurers can charge older people than younger people. Under the AHCA, older Americans could be charged five times more than younger people, up from three times under current law.

The Republicans' new plan would reduce the deficit by just under $34 billion a year, on average, over the next 10 years. For fiscal year 2016, the total federal budget deficit was $587 billion.

The $337 billion deficit reduction estimate is what is known as a "static" score — that is, it does not take the bill's potential economic effects into account. In 2015, the Republican Congress made a rule saying that for major legislation, the CBO also has to include "dynamic" scores that do incorporate those potential effects. However, the CBO said it didn't have time to do so for this report:

"Because of the very short time available to prepare this cost estimate, quantifying and incorporating those macroeconomic effects have not been practicable."

The White House takes on the CBO

The bill is just the first part of the Republicans' plan to repeal and replace the Affordable Care Act. Written as part of the budget reconciliation process, it can make only fiscal-related changes. Part 2 of the GOP's process, as described by House Speaker Paul Ryan, will include deregulation. Part 3 will include changes to the law that could not be made in the reconciliation bill.

Because of this, Health and Human Services Secretary Tom Price and OMB Director Mick Mulvaney protested on Monday that the CBO was not taking into account their full plan.

"We disagree strenuously with the report that was put out," Price said.

This continues a recent pattern from the White House, in the run-up to the CBO's report, of questioning the agency's ability to create accurate estimates. (In a fact check, the New York Times found that the CBO was off on an initial estimate of how big the Obamacare exchanges would be but that its overall track record is good.)

Mulvaney did pick out a piece of the report that he liked.

"Everyplace else where the market is allowed to function, quality goes up and costs go down, and I think if you look for something the CBO may have gotten right in this report, it's that the premiums are actually going to come down in cost," he said.

President Trump has not yet responded directly on Twitter to the CBO's report. However, he did tweet shortly after the report's release, drawing attention to a report that the Obama administration spent $77 million on promoting Obamacare in 2016.

He later tweeted more Obamacare criticism, asking, "How has it impacted YOU?"