Accessibility links
Book Review: 'The Vine That Ate The South,' By J.D. Wilkes Rockabilly singer J.D. Wilkes hints at supernatural happenings in his novel about an unbelievable adventure through a kudzu-infested forest in western Kentucky. 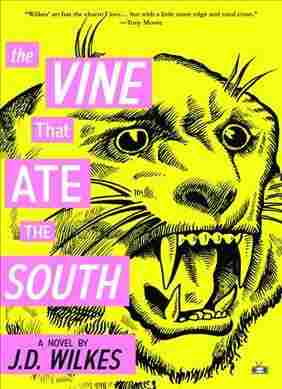 The Vine That Ate the South

If you ever want to make a group of Southerners groan, just ask them how they feel about kudzu. The now-ubiquitous vine was introduced to the United States from Japan in the late 19th century, and widely publicized as a miracle plant: it could be used as food for cattle; it made a nice ornamental addition to porches. But it didn't take very long for "the vine that ate the South" to go out of control, smothering Dixie and suffocating its other plants.

In The Vine That Ate the South, the bizarre, rollicking debut novel from rockabilly and blues singer J.D. Wilkes, kudzu is more than just annoying. The book opens with what the narrator says is a western Kentucky folk tale, about an elderly married couple whose corpses were devoured by the persistent weed. Their skeletons, according to legend, still hang in the possibly-haunted woods called "The Deadening."

The narrator of Wilkes' novel — unnamed except for an unfortunate and unprintable childhood nickname — decides to make the macabre tableau the destination of "my first and last childhood adventure, albeit one conducted in my thirties." His own upbringing was anything but carefree; he grew up poor, and lost his father (under mysterious circumstances) at a young age. "I am weak and incomplete," he says, "the curse of a fatherless home."

Knowing he'll never be able to find the skeletons on his own, the narrator enlists his friend Carver Canute, "a cocky Elvis-haired hell-raiser who keeps his pompadour aloft with pork drippin's, sweat, and a wafting circle of lies." The narrator, timid by nature, sets off with Carver on their mountain bikes, newly emboldened by the presence of his companion: "Yes, if ever the Devil was incarnate on earth, it is down South right now ... hiding in the Kudzu. And I've got a machete!"

Their journey proves difficult in short order. They pass a series of abandoned buildings, meet a shrunken head collector who doubles as an anti-abortion crusader, and wander around a long-forgotten, vandalized graveyard. They narrowly escape death by gunshot and hurricane. And the narrator is sure that he can feel the presence of Satan himself in the haunted forest.

Wilkes peppers the narrative with flashbacks to the narrator's childhood and a series of philosophical meditations on religion, folk tales and the culture of Kentucky. The narrator has fond memories of his education in a charismatic Christian school, but now harbors doubts that God exists at all. "I really hope there's a God," he reflects at one point. "And not an all-knowing One, because then I'd be mad at Him for all the evil and suffering. Yeah, I hope He's kind of a dumbass. With coke-bottle glasses, mismatched socks, and maybe his fly is open. Because how can you stay mad at that?"

The closest Wilkes comes to a statement of purpose for his novel is a beautiful passage in which the narrator reflects on the importance of local and regional history. "In every nook and cranny, in any direction on God's green earth, there is history to be learned," he muses. "Man, I don't know. A small-town kid has to cook up something interesting about his own back yard. Collecting folktales and courting ghosts is just another way for the rural-lonely to stay sane."

Wilkes shares his protagonist's interest in folk tales and history. His band the Legendary Shack Shakers incorporates Southern mythology into their rockabilly and swamp rock-tinged songs, and he's the author of a history book called Barn Dances and Jamborees Across Kentucky. His wide knowledge of the subjects is evident on every page of The Vine That Ate the South.

He takes obvious enjoyment in sharing the culture of his home state; his excitement about each folk tale, each bit of history, shines through the narrative. And it's contagious: It's hard not to get swept up by his enthusiastic prose, his ebullient descriptions of the places and people in the Bluegrass State. (Early in the book, for example, he describes a drugstore porch "where old warriors told ghost stories and old ghosts told war stories.")

It's a relentlessly fun novel, the literary equivalent of a country-punk album that grabs you and refuses to let go. Wilkes has a perfect ear for the dialect of Kentucky, and his writing is so bright, you can almost see every abandoned shack, every kudzu-covered tree. Sure, it's bizarre, and at points almost gleefully obscene, but it's undeniably one of the smartest, most original Southern Gothic novels to come along in years.