Accessibility links
'This Is Us' Creator Dan Fogelman Says He Didn't Mean To Make You Cry Fogelman says he was genuinely surprised to learn that his NBC family drama has a reputation for making audiences teary. "It was not the intent, nor something I expected," he says. 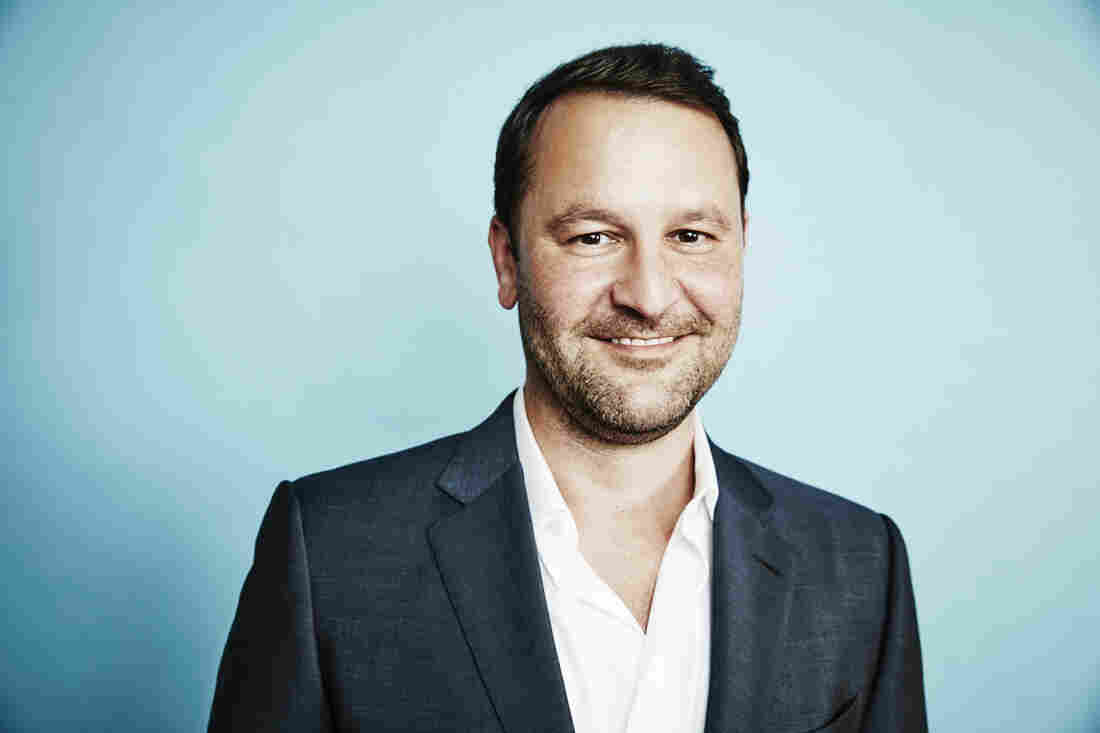 Dan Fogelman is the creator of the breakout NBC family drama This Is Us. Producer Kevin Falls, who has worked with Fogelman on previous shows, has coined a term for the twists and monologues that Fogelman sprinkles into scripts: "Fogeldust." Maarten de Boer/Getty Images hide caption 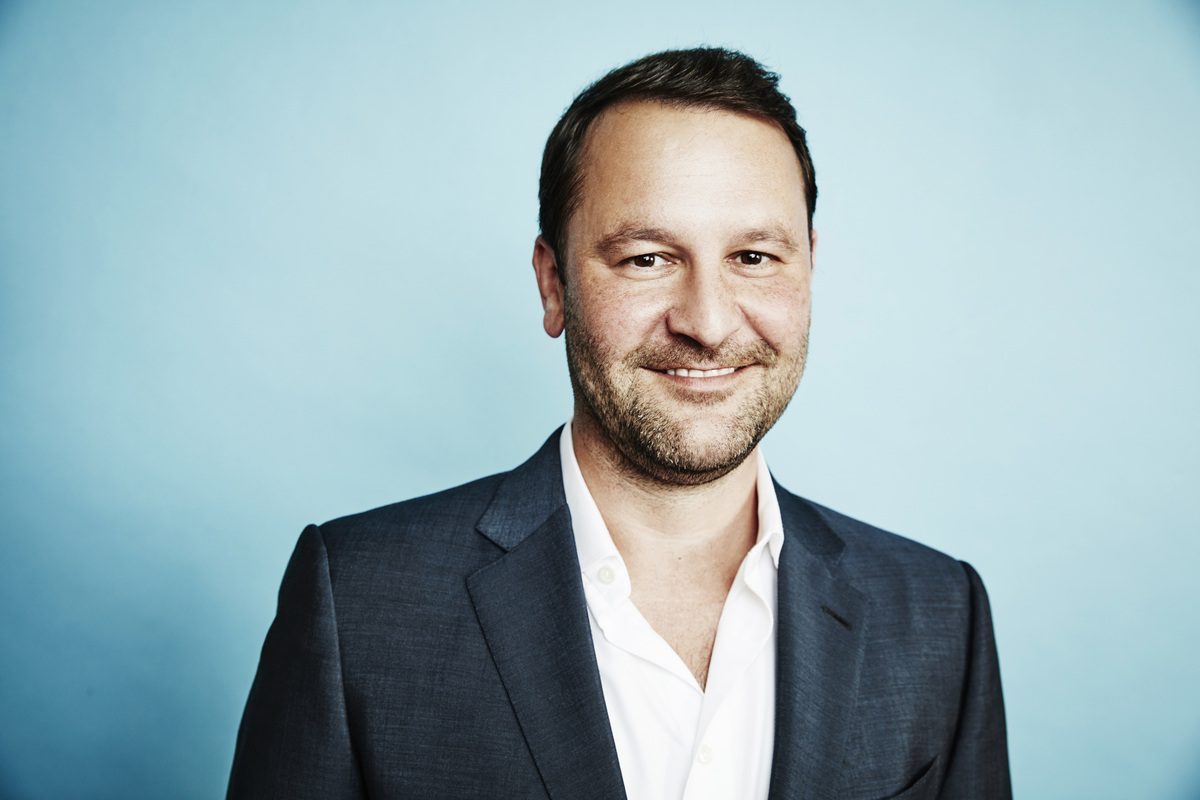 Dan Fogelman is the creator of the breakout NBC family drama This Is Us. Producer Kevin Falls, who has worked with Fogelman on previous shows, has coined a term for the twists and monologues that Fogelman sprinkles into scripts: "Fogeldust."

When a TV show really connects with viewers, it's often a lightning-in-a-bottle experience; a collision of talent, material and public mood that is difficult to define. But that hasn't stopped people from asking Dan Fogelman, the creator of NBC's supersuccessful family drama This Is Us, this question: How did you pull this off?

"There is a form of storytelling — a tone — that lives in between the laugh and the [heavy] emotion," says Fogelman, noting that This Is Us strikes a balance between the dark stories critics seem to love and the lighter, more populist fare. "If you hit that tone right, it can be everything."

[Editors' note: The rest of this story discusses some major plot points, so if you're not caught up on episodes, you may want to watch before reading further.] 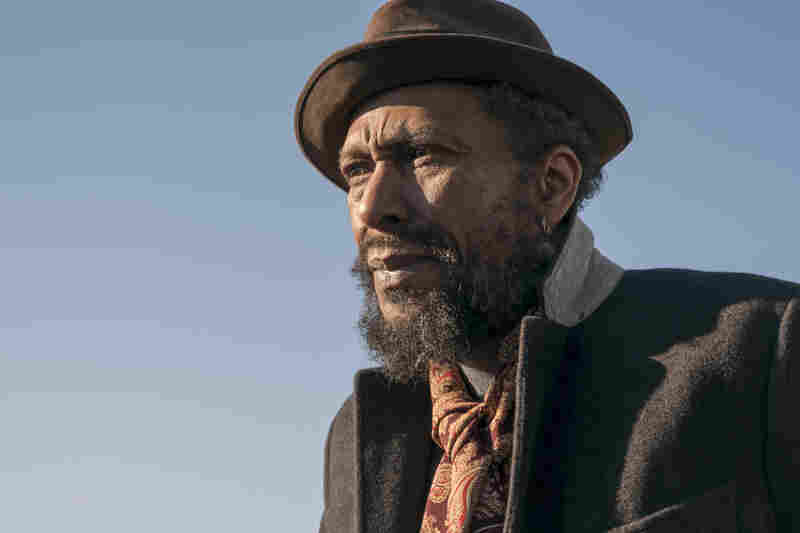 Ron Cephas Jones plays William Hill in This Is Us. "It's become timely to remind people that love is the key, and not hate and not fear," he says. Ron Batzdorff/NBC hide caption

He draws a line between material that an audience can tell is contrived to stir up emotions — Jones calls it "melodrama" — and the feelings that come from identifying with authentic characters, which he says is simply good drama.

And at a time when the news seems filled with stories about political conflict, racism, sexism, fear of immigrants and terrorism and more, Jones notes This Is Us offers a meditation on something different: love.

"It's become timely to remind people that love is the key, and not hate and not fear," he says. "The root of everything in the show is about redemption, it's about forgiveness; it really is about love. And I think that's what people are longing for. They want to see the richness of love."

This Is Us has struck a nerve. The show regularly tops ratings on Tuesdays among young viewers — those ages 18 to 49, whom TV advertisers love — and it has already been renewed for a second and third season before its freshman run ends Tuesday. The episode on Feb. 21 drew more than 15 million viewers — NBC's best numbers in that time slot in 10 years.

Authenticity, Weight And Character Portrayals In TV's 'This Is Us'

And it wasn't the most obvious hit on network TV. Its pilot episode had a complicated structure, centered on three 36-year-olds and a young couple about to have triplets. Viewers were introduced to Randall, a tightly wound corporate executive who finally tracked down the biological father who gave him up for adoption; Kevin, the star of a dumb, yet successful TV sitcom who wanted a bigger challenge; Kate, Kevin's sister, who is struggling with obesity and also served as his personal assistant; and the earnest couple Rebecca and Jack Pearson.

It wasn't until the pilot's end that viewers learned the twist that changed everything: Jack and Rebecca were parents to Kate, Kevin and Randall. The couple's moments as young parents in the pilot were flashbacks in time. Randall was a black child adopted into this white family when the Pearsons' third triplet died during birth.

And William, Ron Cephas Jones' character, is Randall's biological father, who left him at a firehouse after realizing his drug addiction made being a good father impossible.

Kevin Falls calls that kind of writing "Fogeldust" — the twists and emotional monologues that Fogelman sprinkles into scripts that elevate his shows. Falls is executive producer and showrunner of the other show Fogelman helped create for network TV last fall, Fox's Pitch, about the first woman to play on a Major League Baseball team.

"They're emotional gut punches that T-bone an audience member in the best possible way," says Falls, who worked directly with Fogelman as the show creator shuttled between the offices of Pitch and This Is Us when both shows were in production. "Every writer manipulates [the audience] ... so it is about hiding the strings ... not letting you know you're being manipulated. So when you have that big reveal at the end, the audience doesn't see it coming."

[Editors' note: Speaking of seeing things coming, if you aren't caught up on Pitch, you'll want to skip over the next paragraph.]

In Pitch, it's the moment when we learn that pitcher Ginny Baker's crusty father — whom we have seen mentor her through the trials of becoming the first female MLB player — is actually dead. Baker is just imagining her father at her side.

For This Is Us, "Fogeldust" moments come at least once an episode, particularly during the emotional conclusion of William's story, which aired Feb. 21. Welcomed into Randall's family as he's dying of cancer, William takes a final trip to Memphis with his son to visit old haunts and wrap up an old family conflict, dying in a local hospital before they can return.

Dan writes beautiful monologues ... it feels like a play.

"Dan writes beautiful monologues. ... It feels like a play," says Jones, a veteran of New York's theater scene. "So scenes have the space to breathe. He's giving the audience a moment to open themselves up [to what's happening on-screen]."

That skill in tapping into emotions has led to the most mystifying result for Fogelman: news that scenes from the show regularly make viewers cry.

"If you had said a year ago, 'Hey Dan, your show is going to be this big success, what do you think everybody's going to be talking about?' In a million years, I never would have thought it would be how much they are crying watching the show," Fogelman says, laughing. "It was not the intent, nor something I expected."

In fact, Fogelman takes less credit for writing the show than he does for its spot-on casting. He says TV shows in development are often derailed by two problems: Popular actors often refuse to audition for parts, and network TV executives second-guess the casting, refusing to let producers hire the actors they know are right for roles.

But This Is Us was different. Fogelman insisted actors read for parts, and he cast his top choices in every role. That meant hiring hunky Heroes alum Milo Ventimiglia as Jack Pearson, though Fogelman originally envisioned a more average-looking actor in a role the executive producer based on himself. Singer Mandy Moore turned out to be a perfect Rebecca for Ventimiglia's Jack. Jones was hired as William, though the actor admits he is more often cast as criminals or villains than fathers or grandfathers.

Fogelman, however, had no doubts. "I knew the cast was going to kill before we shot a frame [of film]," he adds. "The actors are so truthful, it feels real."

Known as an inventive writer behind films like Cars and Crazy Stupid Love as well as the TV musical Galavant, Fogelman has found unexpected success in This Is Us. It's a family drama that bounces around in time, showing the Pearson siblings at different ages and revealing the history of family frictions that shape their current lives.

It has offered affecting, incisive portrayals of Randall's struggle to handle growing up the only black child raised by a white family, along with Kate's issues with binge eating, weight and romance. And Randall's discovery that his mother knew William's identity and hid it from him until he found his biological father on his own has jolted the series.

There are critics who say the show is too manipulative, that it uses the emotion of powerful moments to paper over inconsistencies in plot or characters' actions. Or that the show is so focused on delivering stuff for fans to talk about later on social media and elsewhere that it sacrifices nuance.

But it's tough for a network TV show to completely avoid clunkers over an entire season. And some of the grousing feels a bit like snobbery, as though a network TV show with so many viewers couldn't possibly offer dramatic quality, too.

Fogelman promises the show's season finale has more dark moments, in which characters viewers have come to love will make bad choices that could test the allegiance of fans. But the drama of watching people with the best intentions occasionally make the worst decisions could be the secret sauce powering This Is Us' success.

"What I think the show might be appealing to is that person who wakes up every day determined to be a better person ... and probably fails 99 percent of the time," Fogelman says. "[They go] to sleep that night bummed out that they didn't do better and wake up the next day determined to do it again. Regardless of politics ... everybody's living the same existence where you're trying to live better and do better. How we get there is what's up for debate."