Accessibility links
Movie Twins? Weirdly Similar Films That Came Out Within Months Of Each Other Hollywood isn't a big town; everyone knows what everyone else is doing. Still, rival studios often face off, refusing to blink, in movie showdowns that didn't need to happen. 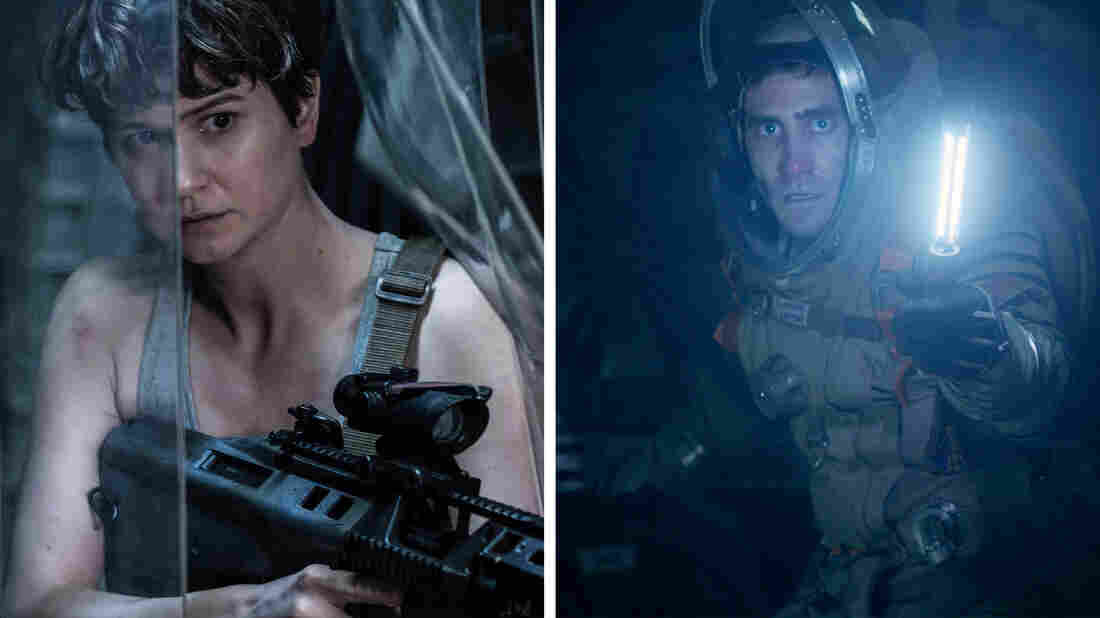 Life and Alien: Covenant (both 2017 films) are about astronauts who have disastrous encounters with extraterrestrials. Pictured: Katherine Waterston (left) in Alien: Covenant and Jake Gyllenhaal in Life. Mark Rogers via Twentieth Century Fox; Courtesy of Sony Pictures hide caption 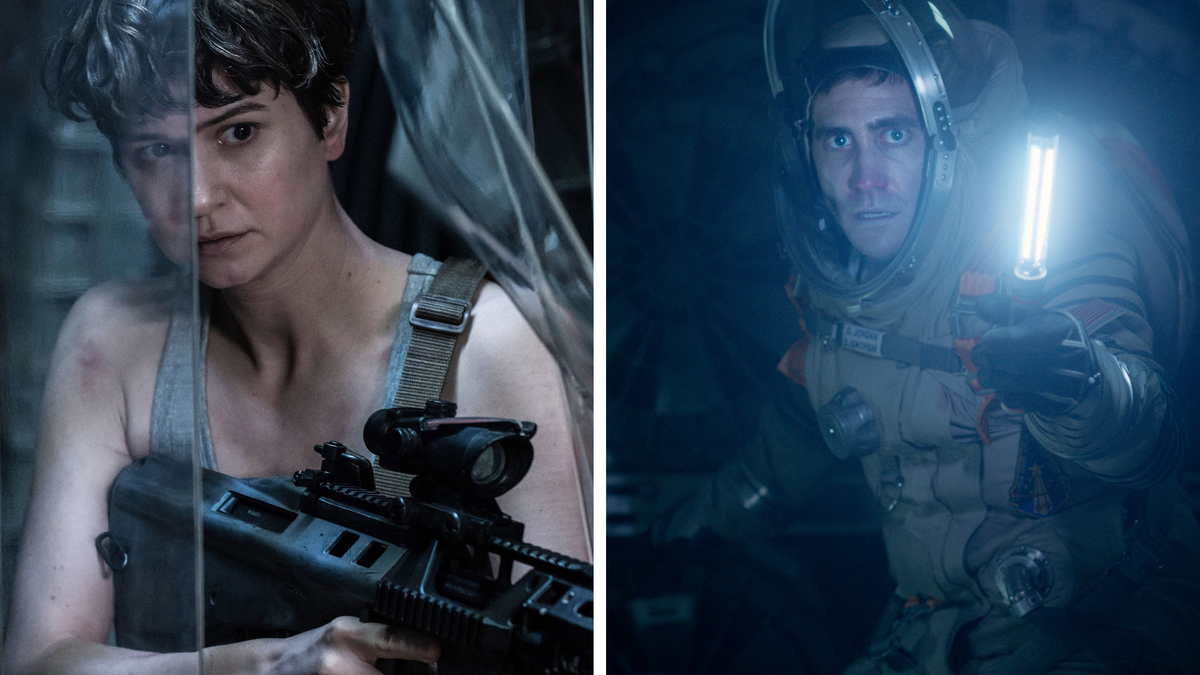 Life and Alien: Covenant (both 2017 films) are about astronauts who have disastrous encounters with extraterrestrials. Pictured: Katherine Waterston (left) in Alien: Covenant and Jake Gyllenhaal in Life.

The new movie Life, which opens March 24, is about astronauts who discover an alien life form and live to regret it. You could say exactly the same thing about Alien: Covenant, which was originally scheduled to open the following Friday — until someone realized that was a recipe for box-office disaster. Alien: Covenant will now open in early May, and that close call, crazy as it is, isn't uncommon in Hollywood.

Rival studios often stare each other down, refusing to blink, in showdowns that didn't need to happen. In 1998, Earth-snuffing asteroids were blown up in the nick of time by nuclear warheads not once, but twice: with much electronic beeping and enormous special effects in Armageddon, and slightly higher beeping and enormous special effects in Deep Impact. That same year, animated insects skittered onto movie screens in both Antz and A Bug's Life — and all of that just one year after dueling lava flows erupted in Dante's Peak and Volcano.

Hollywood is not a big town. Everyone knows what everyone else is doing, and movies that cost millions of dollars require many people and many months of development. Yet still they end up with Red Planet and Mission to Mars in 2000; two romantic comedies about presidential daughters in 2004 (Chasing Liberty and First Daughter); and two animated penguin movies in 2006/2007 (Happy Feet with animated dancing penguins, and Surf's Up with animated surfing penguins).

One film in each of these pairs will necessarily emerge victorious at the box office, but both will arguably be damaged by their proximity. So why bring them out together? Well, it can sometimes make a perverse kind of sense. 1992 saw rival movies about Christopher Columbus' 1492 voyage. (Entirely understandable, considering 500th anniversaries don't come around often.) And with everyone figuring there was a chance they'd sail off the end of the world, it was, at least theoretically, a good story. Still, both 1492: Conquest of Paradise and Christopher Columbus: The Discovery sank like stones at the box office, even though one had Marlon Brando and the other Gérard Depardieu (don't ask me which was which).

At least there was a reason for those to come out at the same time, as opposed to 2013's two presidential kidnapping movies (White House Down and Olympus Has Fallen) or 1985's competing high school nerd comedies (Real Genius and Weird Science), or, for that matter, dueling Christ-story musicals. Godspell was still a hit off-Broadway in 1972, and if it had waited a year, it might've been one on-screen, too; but put it in a multiplex opposite big-budget Andrew Lloyd Webber and it's bound to look puny — which is precisely what happened when Jesus Christ Superstar opened.

Hollywood history is littered with corpses from other double dust-ups, but sometimes lightning strikes more than twice. Three vampire flicks opened in '79 — Nosferatu the Vampyre, Dracula and Love at First Bite. And then there was the year ('87/'88) that audiences had to choose among four body-switching comedies: George Burns had an accident that made him, as the title had it, 18 Again!; Judge Reinhold touched a magic Tibetan skull and switched places with his son in Vice Versa; Dudley Moore took a potion to do the same thing in Like Father Like Son; and in Big it was an amusement park wish that turned a little boy into Tom Hanks. (Audiences only showed up en masse for Big.)

Now, there have also been times when Hollywood duplication involved a bit of duplicity. When Gone with the Wind was still auditioning Scarlett O'Haras, Warner Bros. decided to steal MGM's thunder by beating it into theaters with a Confederacy epic of its own. It bought the rights to the Broadway play Jezebel, cast Bette Davis as its vain, self-destructive Southern belle, shot it more cheaply in black and white, and opened it while Gone with the Wind was still shooting. Jezebel won Davis an Oscar, which gave Warner Bros. bragging rights in February 1939 — bragging rights that pretty much evaporated a few months later.

Close on Scarlett and Rhett's heels came two biopics about the guy who ended their way of life: Young Mr. Lincoln starring Henry Fonda, and Abe Lincoln in Illinois starring Raymond Massey. Biopics often seem to inspire a herd instinct in Tinseltown. Both Oscar Wilde and The Trials of Oscar Wilde came out, as it were, in 1960. More recently, there was a big year for another gay icon, with two stars not only doing Truman Capote impressions but telling the same stories: Philip Seymour Hoffman in Capote and Toby Jones in Infamous.

Infamous was an indie, while Capote was from a major studio, which perhaps explained the overlap. That was also true of two competing blonde bombshell biopics about Jean Harlow in 1965. One starred Carroll Baker and the other Carol Lynley — two Carols in films released months apart called, believe it or not, Harlow and Harlow. It's as though the producers had a death wish.

Still, if films are sufficiently different in tone, there won't be audience confusion. In 1964 — after the Cuban missile crisis and with the whole world nervous about the Cold War turning hot — there were two movies about the start of World War III. Nuclear annihilation played straight in Fail-Safe and for laughs in Dr. Strangelove or: How I Learned to Stop Worrying and Love the Bomb. There were no reports of moviegoers laughing at the wrong movie.

About a decade after that, for the first time in Hollywood history, wiser heads prevailed. Two best-selling novels about burning skyscrapers were optioned by Warner Bros. and Twentieth Century Fox. Irwin Allen, who had just made The Poseidon Adventure, suggested they do something that no major studios had ever done before: join forces and make The Towering Inferno.

Not that there weren't issues. Fox had Steve McQueen under contract, Warner Bros. had Paul Newman, and both insisted on top billing, which was tricky. McQueen also insisted not just that his salary equal Newman's but that they have the same number of lines. (You can almost feel the screenwriters divvying them up.)

Still, audiences got a bigger movie, and Fox and Warner Bros. got the biggest attendance of 1974 — roughly the same as for one of the Lord of the Rings movies. So everybody won, proving that it can be profitable to not go head-to-head. Which is not to suggest that Hollywood has learned that lesson: Witness last year's twin terrible opera singers Marguerite and Florence Foster Jenkins, and the not two, but seven Robin Hood movies currently in development, including feminist, punk-pop and dystopian-future versions. Because the gazillion previous ones listed in IMDB just weren't enough.