Accessibility links
Tale As Old As Time — And It Shows: 'Beauty And The Beast' The live-action, CGI-besotted remake of Disney's 1991 animated musical never manages to justify its existence, says critic Andrew Lapin, because it sets out "not to conjure wonder, but nostalgia."

Tale As Old As Time — And It Shows: 'Beauty And The Beast'

Tale As Old As Time — And It Shows: 'Beauty And The Beast' 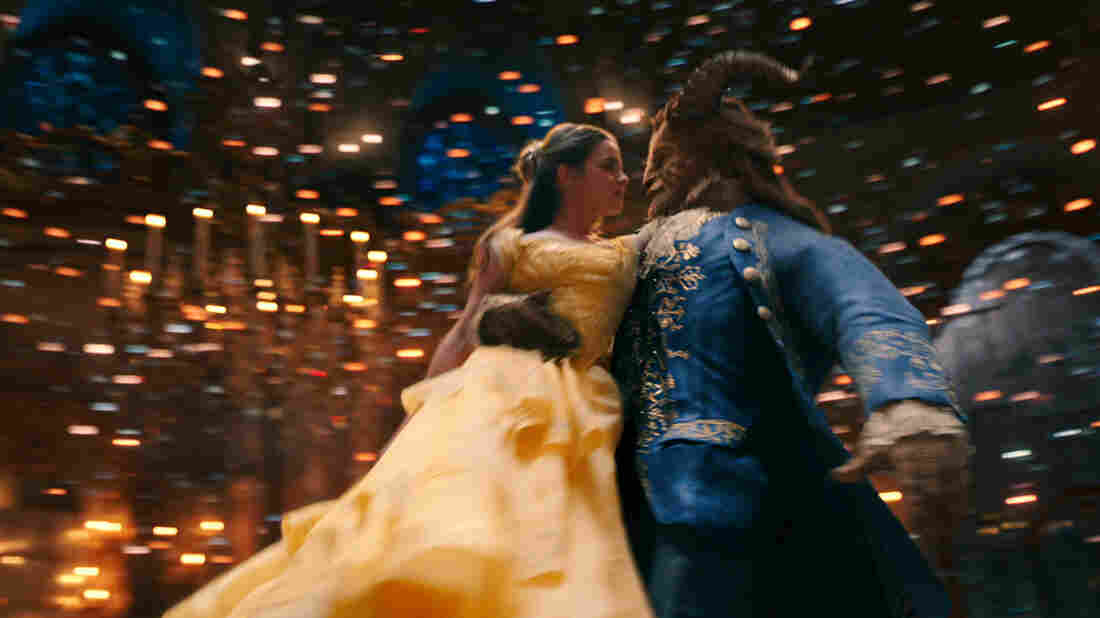 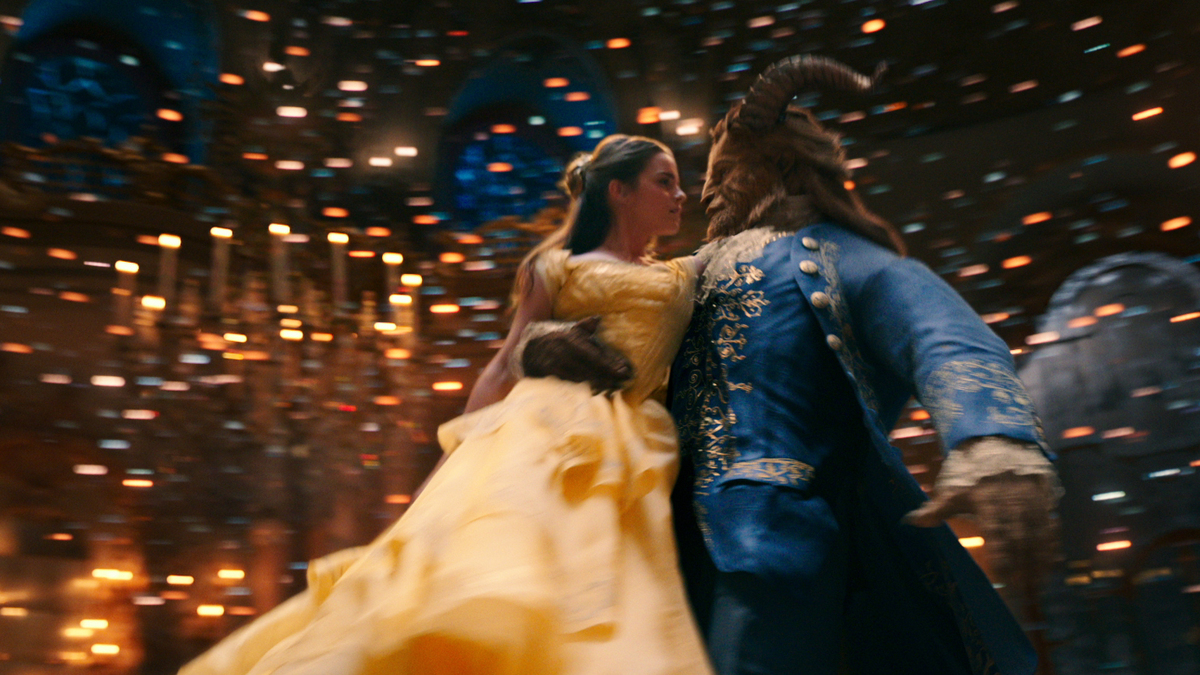 Buffalo Gal, Won't You Come Out Tonight: Belle (Emma Watson) and the Beast (Dan Stevens) twirl in the live-action musical salute to interspecies Stockholm Syndrome, Beauty and the Beast.

There's something very, very off about all those chipper household objects in Disney's expensive, soulless new live-action retelling of Beauty and the Beast. But we don't realize quite what it is until "Be Our Guest," the intended showstopper at the film's midway point, in which all these transmogrified servants band together to make Belle, their lovely young prisoner, feel like royalty.

You of course remember what this was like in the 1991 animated film, with that cabaret of plates and forks in high-stepping kick-lines that crossed every inch of the screen, as Lumiere the talking candelabra carried us along with his big eyes and the expressiveness of his elastic, wax-and-metal body. It was one of those perfect, much-vaunted "Disney moments": Lumiere and his friends, after all, were wholly Mouse House creations, meant to help justify the film's existence distinct from Jean Cocteau's magisterial 1946 version, and their daffy, colorful presence in the brooding French fairy tale injected just enough comic energy to let keep things ticking along as sharp as Cogsworth's clockwork.

But under director Bill Condon, the new Lumiere's body is a single shade of murky CGI bronze featuring a molded candle-socket that — amid the darkness of the Beast's castle — is barely recognizable as a face, out of which streams Ewan McGregor's atrocious French accent. He's still eager to please, prostrating his flames in gleeful servitude — but his joints creak noisily as he moves, and his eyes seem to lack pupils: He has been drained of his humanity in the name of "realism."

Mrs. Potts, the genteel teapot matron voiced this time by Emma Thompson, fares slightly better, in that her face is clearly painted onto the side of her fine china (minus the iconic spout-nose of Angela Lansbury's animated incarnation). But when that penciled eye winks at the camera in horrifying IMAX-vision, we realize that our demand for Disney remakes is the 21st century's witch-curse that dooms these once-lovable thingamabobs to a different kind of bodily prison.

As if wary of unleashing any more monsters than it already has, the new Beauty otherwise treats the script and camerawork of the animated version as sacred text. Look, here's the little town filled with little people, every day like the one before. Here's ol' Beastie (Dan Stevens), the prince transformed by a witch until he can find true love. Stevens is fine in the role, or so one assumes: he's heavily obscured by his digitized mask of horns and fur, which can't possibly allow for the tragic contradiction of savage-sweet emotions Jean Marais once brilliantly conveyed, under heavy makeup, in the Cocteau version.

Emma Watson, who rose to superstardom in Harry Potter's more convincing CGI-magic world, certainly looks the part of Belle with that yellow dress and the blue-and-white provincial rags that she gets to twirl in a computerized meadow, The Sound of Music-style. But her vocal chops aren't soaring enough to support the weight of the film, and her performance is eternally distant, even when she should be plugged into the wonder. There's not much of a difference between the spacey, lost-in-thought Belle who wanders through her village in the opening number, the Belle who selflessly sacrifices herself to the Beast's prison in order to free her father from his clutches, and the Belle who later falls in love with her captor and his magic friends.

Composer Alan Menken On His Disney Tunes: 'I Prefer Them To Be Hum-able'

The bookish maiden is still a prized object d'art for vain war hero Gaston, played with a smart, practiced nastiness by Luke Evans — in his braggadocious delivery, he recognizes how well the villain's oafish hyper-masculinity translates to our current moment. While Gaston plots to wed Belle by hook or crook, Josh Gad steals the film as his sidekick LeFou, who represents a progressive step for Disney: their first big-hearted evil lackey. LeFou goes along with his leader's schemes while bearing a giant, dopey grin on his face; he legitimately cares for his sick boss's well-being, and shoots him looks of longing mid-song. When he finally does find love, it's in the form of a split-second dance with an unnamed man, an image that could only shock people predisposed to be shocked.

Very little is new, apart from some superfluous backstories and the occasional household object. But everything old feels empty and dull. It seems like it would be more fun to skip the film altogether and just install the sets at Disney World, where a Belle impersonator in a familiar yellow dress could snap photos with children who only want to confirm that the film in their minds could exist in real life.

Disney has many more tales-as-old-as-time heading to live revivals. This in itself is not necessarily cause for alarm: Last year's The Jungle Book was marvelous entertainment, using its immersive technology to strike just the right high-stakes tone, and even the somewhat staid Cinderella found a newly elegant sensibility in its tale of inner beauty. But those two films had the advantage of varied takes on animated source material that was more than five decades old. In contrast, Beauty's chief directive is not to conjure wonder, but nostalgia — in service of a generation trying to meme its childhood back from the enchanted castle of the past. There must be more than this provincial life.

In a previous version of this story, Ewan McGregor's last name was incorrectly spelled as MacGregor.