Review: Mount Eerie, 'A Crow Looked At Me'

Review: Mount Eerie, 'A Crow Looked At Me' 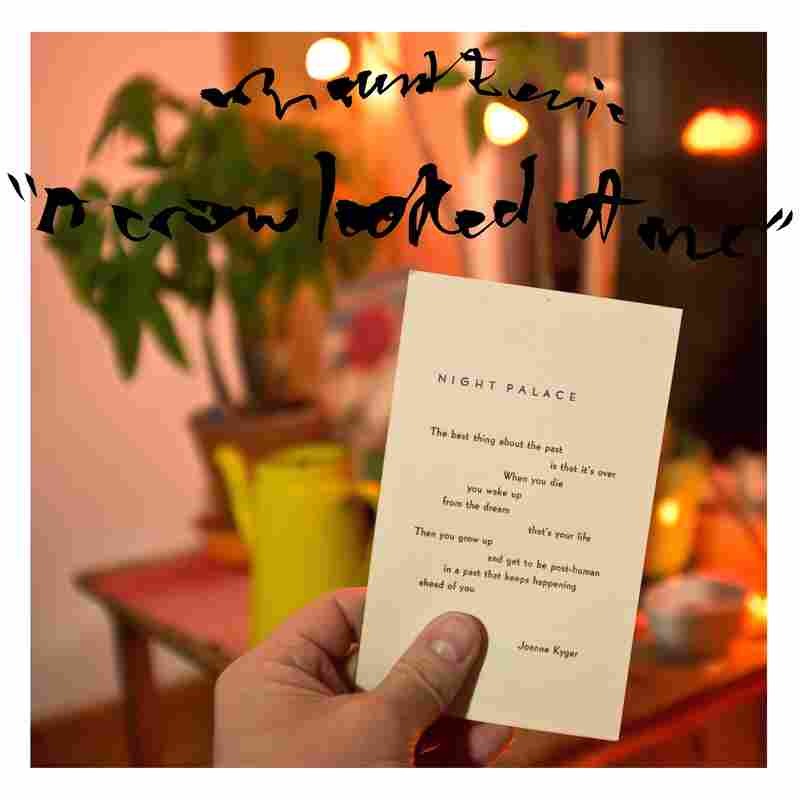 Mount Eerie: A Crow Looked At Me Courtesy of the artist hide caption

At the end of 2014, Geneviève Castrée and I were writing back and forth to each other about domestic life, baking bread, and the forthcoming records by both her own Ô Paon project (Fleuve) and that of her husband Phil Elverum: Mount Eerie's Sauna. I had been immersed in the music of Mount Eerie and Elverum's previous band The Microphones for quite some time, and his music felt like "second nature, like I've already heard it somehow in a dream," I wrote to her. His music discovers the unknown as if it's always been, just as grand and mysterious and real as the mountains and foggy lakes that live inside those songs.

"This household is experiencing pure insanity right now as our releases come out one week apart and we gave birth to a baby daughter last Tuesday," she wrote back a few weeks later. "It is WILD. I look forward to sleeping a little more." She was in total glee mode and, perhaps wrapped up in the whirlwind, had not yet told her parents — "I am fixing this week," she assured.

Five months later, she was diagnosed with stage 4 pancreatic cancer. The chemo treatments were aggressive, and as the medical bills continued to mount and Elverum became a fulltime caregiver, they turned to crowdsourcing in June, making the couple's very private lives public. On July 9, 2016, Geneviève Castrée died. She was a fearless musician and brilliant comic-book artist who explored alienation and destruction with grace and grit. She was extremely opinionated, but also extremely kind, a rare combination that bore out her soul in her art and those lucky enough to know her.

She was the wife of Phil Elverum, mother to their child.

Two months later, in the room where Castrée died and using her instruments, Elverum began to write and record alone. "Death is real / Someone's there and then they're not / And it's not for singing about / It's not for making into art," begins the result, A Crow Looked At Me. So much of Elverum's mythos — a series of natural-themed metaphors mingling with self-revelations both minor and colossal — has been not just about death, but the beyond. Now Elverum reminds us, reminds himself, in plain language that warps back to reality with somber precision: Death is real. And the beyond isn't just life after death, it's living after a life's gone, rendered in that opening track's heartbreaking reveal:

A week after you died a package with your name on it came and inside was a gift for our daughter you had ordered in secret and collapsed there on the front steps I wailed.

A backpack for when she goes to school a couple years from now. You were thinking ahead to a future you must have known deep down would not include you though you clawed at the cliff you were sliding down, being swallowed into a silence that is bottomless and real.

Mount Eerie Plays 'An Absurd Concert To Nobody'

A Crow Looked At Me is not only a stark portrait of grief but also a love story of 13 years. "I'll speak to your absence and carry our stories around my whole life," he sings over what sounds like a breathing machine on "My Chasm," lost in loss and repeating her memory like a prayer, or really, a conversation that's still ongoing. But just as Elverum disarms with devotion, he later attempts to find some humor in his pain just moments later with a self-deprecating admission: "I now wield the power to transform a grocery store aisle into a canyon of pity and confusion and mutual aching to leave."

While the elements nod to the quiet, nylon-stringed thrum of Dawn or Lost Wisdom, this is Elverum at his most direct, his words spilling out like scribbles on note paper, held together by his unique guitar style that layers rhythms on one another to disorienting effect. "Ravens" contains some of Elverum's most tender playing, lingering on notes as if to squeeze berries for plumpness, and suddenly plucking the essence as if the vine held something true. But on "Swims," the guitar is almost an afterthought, lightly scraped not strummed, yet purposeful as simple piano chords guide Elverum's most naked vocal performance. He documents visits to their grief counselor with a loose sense of time, and when the counselor dies just two months after Geneviève, death seems meaningless "except in the confusion of our survived-bys, grasping at the echoes." But some of those survived-bys can't grasp reality just yet, not from denial, but from experience: "Today our daughter asked me if mama swims / I told her, 'Yes she does, and that's probably all she does now' / What was you is now borne across waves, evaporating."

A Crow Looked At Me cannot somehow be heard "in a dream," as I wrote to Geneviève in what seems like ages ago. It is and isn't like anything Elverum's ever made — he's encountered the concept that, for so many years, guided his work without experiencing it so seismically. Elverum carries an unbelievable weight, and you can hear it: You can hear the room, you can hear the sacred reverie in how he plays Geneviève's instruments.

But this is still a love story. Their instant connection is recounted in "Soria Moria," the only song to feature anything resembling a refrain, and the only song to plunge into the blackened buzz of Wind's Poem. "Crow" is a love song to their daughter, growing up without a mother — quieter than the rest, hushed as if the rest of us aren't supposed to hear this one. "Are you dreaming about a crow?" he asks his daughter. "And there she was." It's only fitting that Elverum closes an album that has been so real, so unflinching about his experience, with a mystery and an answer only known between a father and child. They enter the beyond... together.