Accessibility links
Trump Violating Lawyers' First Rule For Clients: Keep Your Mouth Shut The president and his advisers are playing into lawyers' worst nightmare: digging their legal case into a deep hole by making remarks outside the courtroom. 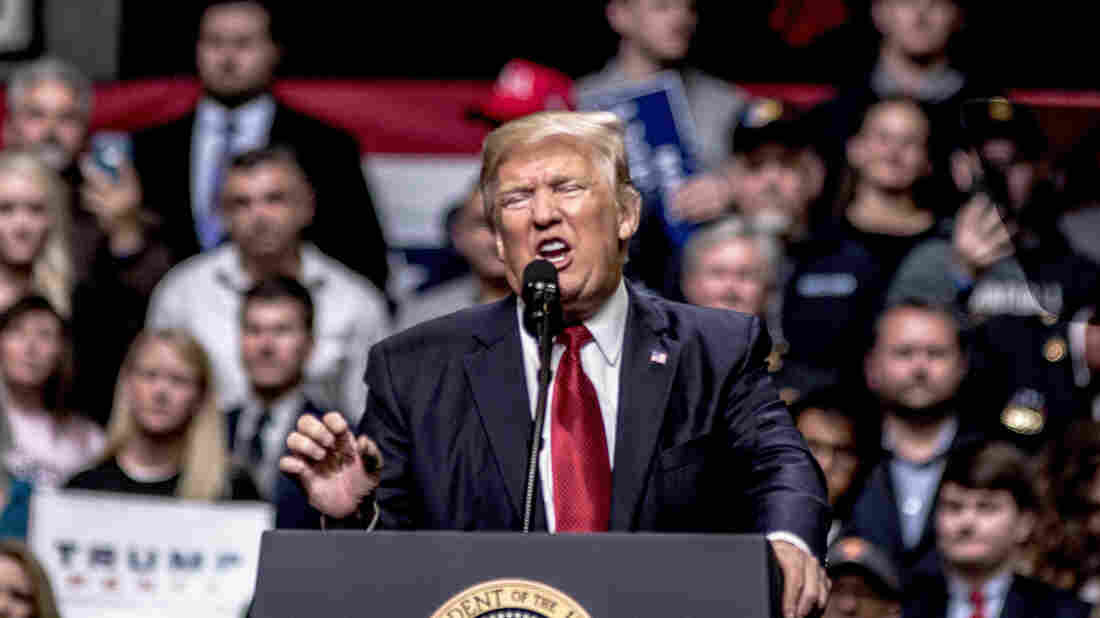 President Trump speaks at a rally in Nashville, Tenn., Wednesday. During the speech, he criticized a court that blocked his new travel executive order. And that, lawyers say, could be a problem for him. Andrea Morales/Getty Images hide caption 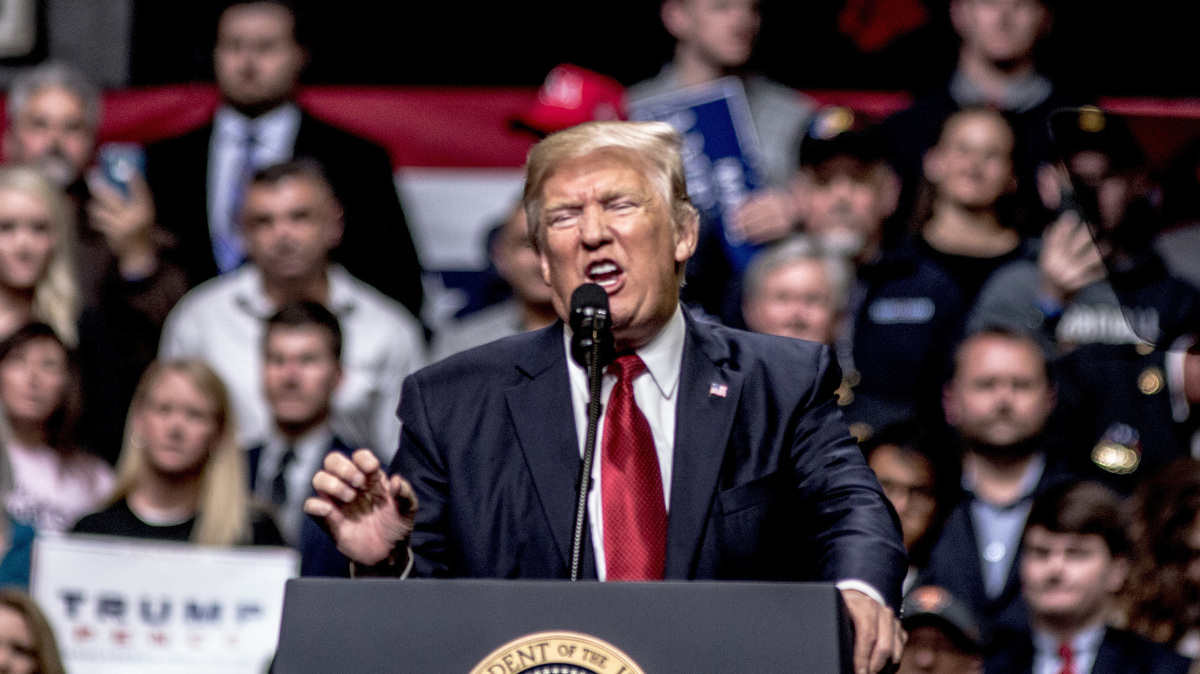 President Trump speaks at a rally in Nashville, Tenn., Wednesday. During the speech, he criticized a court that blocked his new travel executive order. And that, lawyers say, could be a problem for him.

Ask any veteran lawyer about her worst fear, and you'll hear this: the client who digs a hole for himself — and then keeps on digging.

The challenge of defending a difficult client is once again in the news this week as the Justice Department has struggled to convince federal judges that President Trump's executive order, imposing limits on travelers from six majority Muslim countries, is not, in fact, a ban on Muslims.

In rulings from Hawaii, Maryland, Washington and beyond, courts have cited Trump's own words as evidence the travel ban is infected by an intent to disfavor Muslim visitors and refugees. That, Judge Derrick Watson in Hawaii concluded Wednesday, violates the First Amendment's establishment clause, which prohibits Congress from establishing a state religion or favoring one over another.

"A reasonable, objective observer — enlightened by the specific historical context, contemporaneous public statements, and specific sequence of events leading to its issuance — would conclude that the Executive Order was issued with a purpose to disfavor a particular religion," the judge wrote.

The predicament of the Justice Department lawyers defending the president's order reminded one criminal defense attorney of this remark from the Roman philosopher Cicero: "Man is his own worst enemy."

On the campaign trail, President Trump called for a "total and complete shutdown" of Muslims at the U.S. border. The Justice Department has been arguing those statements before the November election should be out of bounds in court. And some legal scholars agree.

Problem is, Trump keeps on talking.

At the time he unveiled his first executive order, on Jan. 27, the president told the Christian Broadcasting Network that Christians would be given priority when they sought status as refugees. "We are going to help them," Trump said. "They have been horribly treated."

That weekend, his close adviser Rudy Giuliani, the former New York mayor, told Fox News that the president had directed him to come up with a way to enact a Muslim ban that would pass legal muster. Advocates for refugees and civil liberties groups used those remarks to persuade a judge to block the order.

"There's a concept in the Rules of Evidence called 'Party Admission,' " said longtime lawyer Mark MacDougall. "When you make a statement that's unfriendly to your case, it can be used against you in court. That's why all good lawyers tell their clients to keep their mouths shut. That's your first conversation."

MacDougall, who has defended government officials, intelligence agents and corporate executives, said most defendants are "usually sufficiently scared that they listen. Politicians are different."

Inside the Trump White House, the president and his top aides indeed are adopting their own approach, one that in part targets the judges ruling against them. After courts blocked the first order, dealing the White House a political and public relations blow, White House aide Stephen Miller told interviewers that a newly envisioned order would include technical changes but have the same basic purpose. That remark wound up in an adverse court decision this week.

Again, Wednesday evening, just hours after a court restrained the new travel ban, Trump told an audience at a Nashville, Tenn., rally that the ruling was "terrible" and politically motivated. With television cameras trained on him, the president said the new executive order, issued March 6, was a "watered-down version of the first order."

"This new order was tailored to the dictates of the 9th Circuit's, in my opinion, flawed ruling," Trump added. "This was, in the opinion of many, an unprecedented judicial overreach."

A reply came swiftly on Twitter from one of the many courtroom opponents of the idea. ACLU Deputy Legal Director Cecillia Wang entreated, "Keep talking, Mr. President. Keep on talking."

Among those who would prefer the president stop talking: federal judges themselves. Five appeals court judges from the 9th Circuit, who wrote Wednesday in support of Trump's sweeping powers on immigration, nevertheless went out of their way to decry some of his rhetoric.

"The personal attacks on the distinguished district judge and our colleagues were out of all bounds of civic and persuasive discourse — particularly when they came from the parties," the judges said. "Such personal attacks treat the court as though it were merely a political forum in which bargaining, compromise, and even intimidation are acceptable principles."

It's not clear what kind of advice the president is getting from his White House counsel, Don McGahn, or the Justice Department — or whether Trump is taking it. Longtime defense lawyer William Taylor III said he has concluded Trump wants to talk to his political supporters and "just doesn't care" about legal advice to the contrary.

There's been no public hint of criticism from the lawyers taking a beating in court on behalf of the president. But at least one former Obama Justice Department spokeswoman, Dena Iverson, suggested a lot is going on behind the scenes:

Sarah Isgur Flores, a spokeswoman for DOJ, called the Hawaii ruling flawed in its reasoning and scope and pledged "the Department will continue to defend this Executive Order in the courts."

The question in the legal community is, what will President Trump and his top aides say before then.