Accessibility links
Trump Embraces One Of Russia's Favorite Propaganda Tactics — Whataboutism What's the easiest way to swing back at critics? For Trump (as well as Putin), it's to cry "hypocrite." 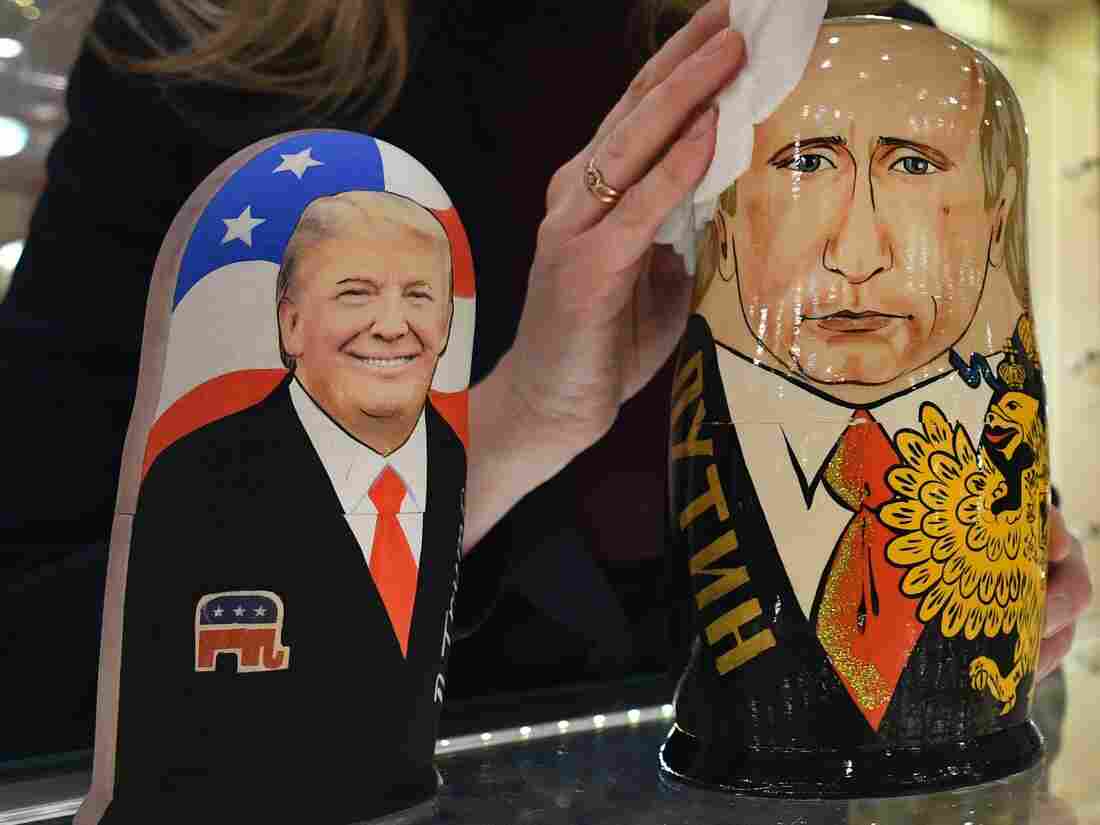 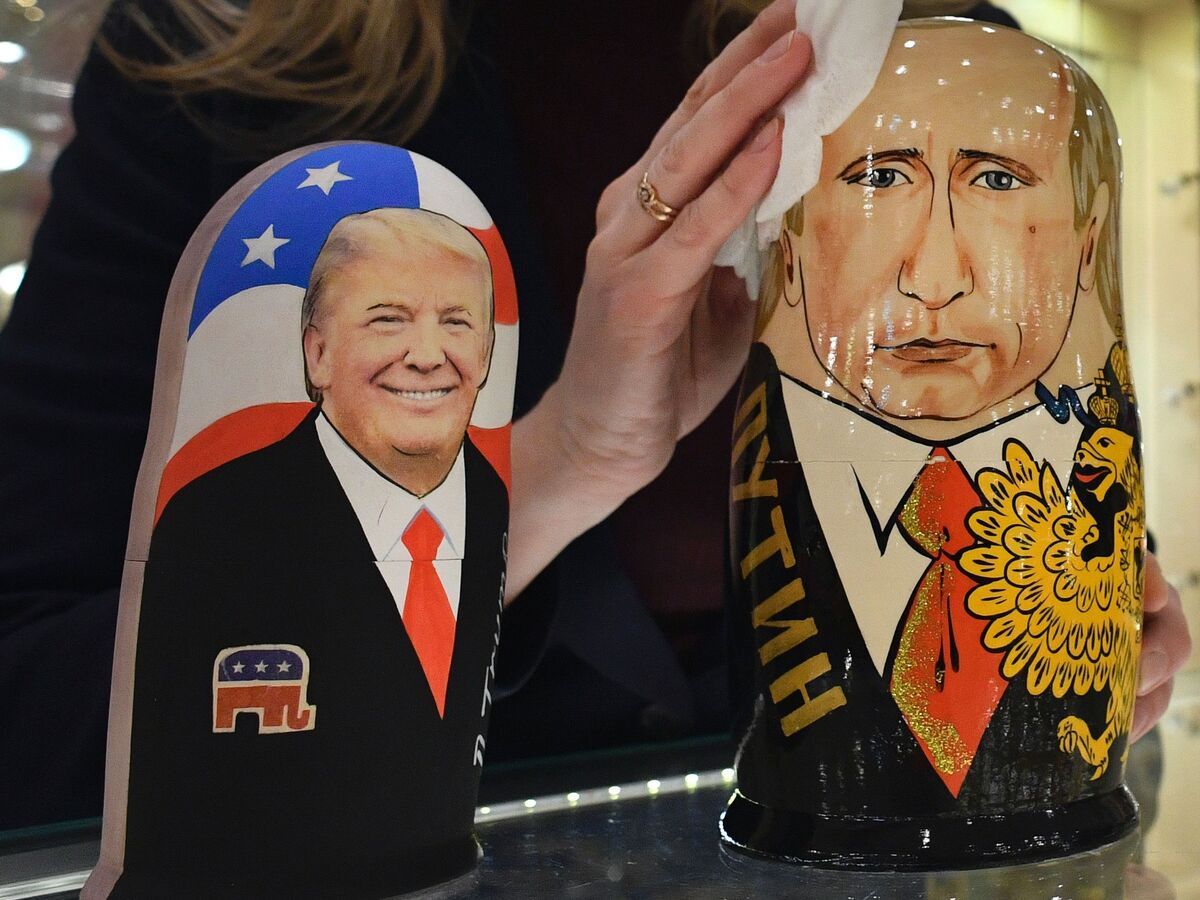 President Trump has developed a consistent tactic when he's criticized: say that someone else is worse.

This week, when the Congressional Budget Office estimated that Republicans' health care plan would leave 24 million additional people uninsured in 2026, Trump's first move wasn't a direct response. Instead, he took to Twitter to blast the Affordable Care Act (commonly referred to as Obamacare), criticizing how much was spent on promoting it and asking people to tweet their own criticisms.

Prior to that, when the floodlights were on communications between then-Alabama Sen. Jeff Sessions and the Russian ambassador, Trump's tweets were all about Democrats' contact with the Russians:

Who was it that secretly said to Russian President, "Tell Vladimir that after the election I'll have more flexibility?" @foxandfriends

Famously, he even did a reverse version of this — defending not the U.S., but Russia — when he told Fox News' Bill O'Reilly about his "respect" for Russian President Vladimir Putin, as former Hillary Clinton State Department and campaign adviser Jake Sullivan noted in Foreign Policy in February.

This particular brand of changing the subject is called "whataboutism" — a simple rhetorical tactic heavily used by the Soviet Union and, later, Russia. And its use in Russia helps illustrate how it could be such a useful tool now, in America. As Russian political experts told NPR, it's an attractive tactic for populists in particular, allowing them to be vague but appear straight-talking at the same time.

A schoolyard taunt, brought to a global level

The idea behind whataboutism is simple: Party A accuses Party B of doing something bad. Party B responds by changing the subject and pointing out one of Party A's faults — "Yeah? Well what about that bad thing you did?" (Hence the name.)

It's not exactly a complicated tactic — any grade-schooler can master the "yeah-well-you-suck-too-so-there" defense. But it came to be associated with the USSR because of the Soviet Union's heavy reliance upon whataboutism throughout the Cold War and afterward, as Russia.

Just Because A Bill Is Long Doesn't Mean It's Bad

Whataboutism — particularly directed toward the U.S. — was so pervasive in the USSR that it became a joke among Soviets, often in a subversive genre called "Armenian Radio" jokes, explains one Russia analyst.

U.S. Ethics Official To White House: No, These Rules Definitely Apply To You

"Armenian Radio would be asked, 'How much does a Soviet engineer get paid?' and they'd be like, 'I don't know, but you [in America] lynch Negroes,'" said Vadim Nikitin, a Russia analyst and freelance writer. Eventually, that punchline came to be synonymous with the whole phenomenon of whataboutism, Nikitin said.

But whataboutism extends beyond rhetoric, said Dmitry Dubrovsky, a professor at Columbia University's School of International and Public Affairs.

"It's not only a narrative practice; it's real policy," he said. "For example, the Russians installed a special institute to cover the violation of human rights in the United States."

Dubrovsky is referring to a branch of the organization called the Institute for Democracy and Cooperation, which is widely considered pro-Kremlin. In fact, IDC shuttered its New York office in 2015 because it said it had achieved its goals, Buzzfeed reported: "The human-rights situation has improved in the United States," IDC Director Andranik Migranyan told Gazeta.ru.

One big reason whataboutism is so attractive: it's a simple way to shrug off criticism or even responsibility for any wrongdoings.

"You're saying that in the negotiations we have, that no one is perfect, and no one can claim to be, and as such, what this does is let you off the hook," Nikitin said.

So when Trump denigrated Obamacare amid heavy criticism of the GOP's health care plan, he seemed to be saying that whatever the GOP plan's flaws, at least it isn't the worst they could do (the worst, in his eyes, being Obamacare). Instead of giving a reasoned defense, he went for blunt offense, which is a hallmark of whataboutism.

Whataboutism has been common in Putin's Russia. The Atlantic cited one such example in 2014, noting that when the Kremlin faced criticisms of its treatment of protesters, government officials responded, "What about the United Kingdom? Breaking the law during public gatherings there could lead to a fine of 5,800 pounds sterling there or even prison."

One reason that Trump and Putin might both find whataboutism useful, said one expert in Russian politics, is that they have common political impulses.

"[Putin and Trump] are both populist leaders. They always try to be as uncertain as possible. And for a populist that's important," Dubrovsky said. "Whataboutism is a very substantial part of populism rhetoric."

The idea, Dubrovsky posited, is that a populist leader wants to keep his masses of supporters on his side. Getting too specific on a policy or a position risks creating rifts within that base of support. Pointing to a common enemy, on the other hand, is a great way to unify a group.

In addition, there can be an implicit toughness to whataboutism, in that it openly acknowledges that nobody is perfect.

"I think what the Russian discourse is [is] that it's, in fact, very difficult to cleave perfectly to [a set of morals]," Nikitin said. "And anyone that claims to the contrary can be unmasked as, in fact, being just as flawed as anyone else is."

Whataboutism flattens moral nuances into a black-and-white worldview. But in this worldview, it's very difficult to be the good guy; idealism is the ultimate naïveté, and anyone who dares to criticize another can be "unmasked" as a hypocrite. This creates a useful moral equivalency, as Nikitin added: if nobody is perfect, there's license to do all sorts of imperfect things.

The idea, he said, is that "you've got to be practical and kind of bloody-minded and get your hands dirty. Anyone who claims otherwise is lying."

That closely mirrors what Trump told O'Reilly: "What, and we're so innocent?"

It might come off as brash truth-telling, but it's nevertheless a defense of a world leader who has been accused of killing his critics.

At least one Russian foresaw the Trump-Putin rhetorical parallels, even in the early days of the administration. In late January, Russian journalist Alexey Kovalev warned American journalists that Trump might take on some Putinesque media tactics:

"The thing is that when you think it's your mission to make him [Putin] admit a lie, or an inconsistency in his previous statements [because he tends to make U-turns in his statements on policies], when you try to point out those inconsistencies or catch him red-handed lying, there's no point because he'll evade your question, he knows that he can just drown you in meaningless factoids or false moral equivalencies or by using what is called 'whataboutism.'"

Kovalev was right on many counts: Trump has indeed proved to be inconsistent, make political "U-turns," repeatedly state falsehoods, and, of course, engage in whataboutism. And while Kovalev (and perhaps others) may have foreseen it, it's no less striking that while Putin's Russia is causing the Trump administration so much trouble, Trump nevertheless often sounds an awful lot like Putin.