Accessibility links
Nile Rodgers At SXSW: 'No One Else Can Tell The Story' The influential producer has worked with everyone from David Bowie to Daft Punk. He spoke with NPR's Michel Martin shortly after delivering a keynote address at the Austin music festival. 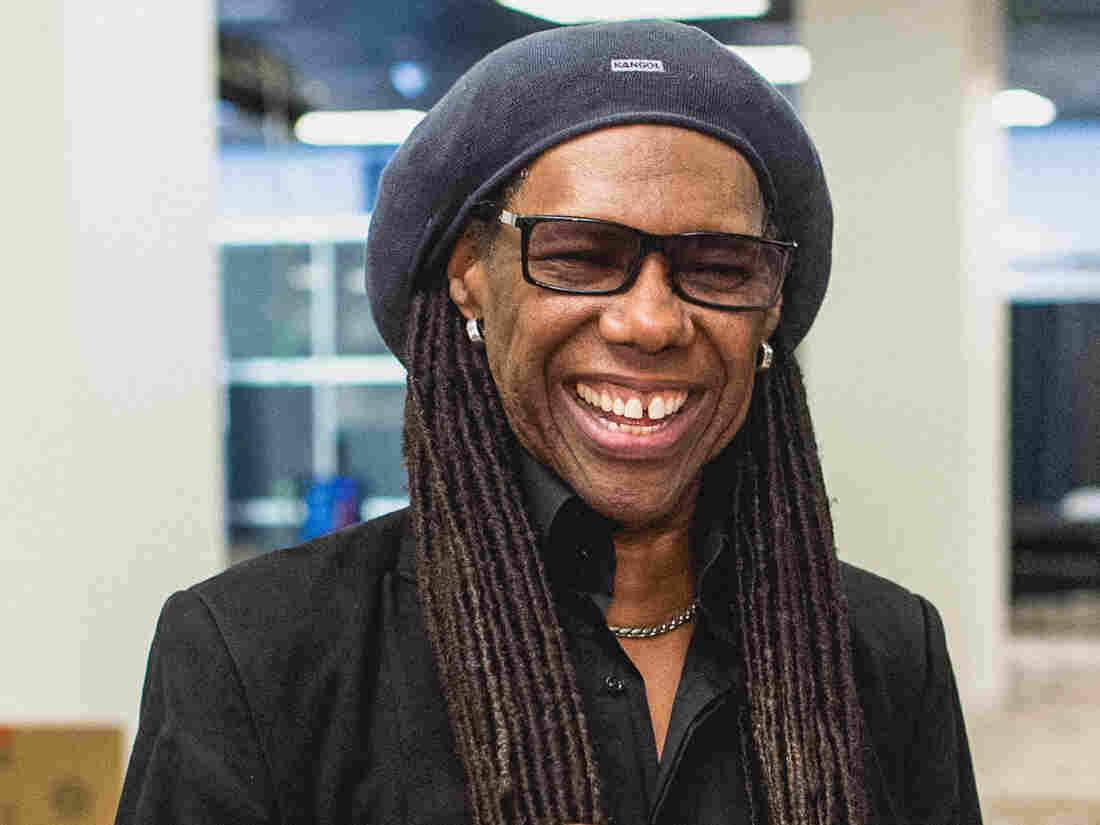 "My life and my career is a real anomaly," Nile Rodgers says. "I mean, I'm a 64-year-old black man with a front-line record deal. It's insane." Adam Kissick for NPR hide caption 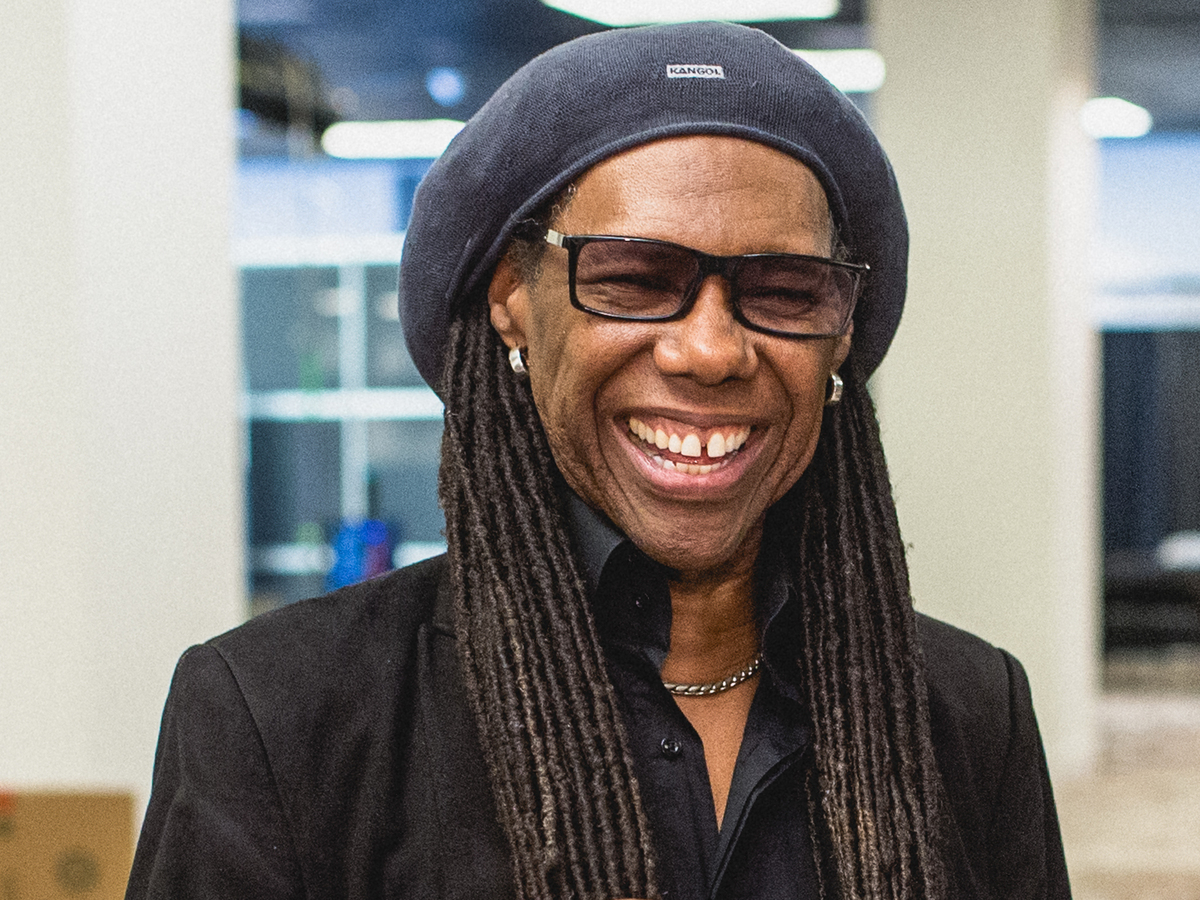 "My life and my career is a real anomaly," Nile Rodgers says. "I mean, I'm a 64-year-old black man with a front-line record deal. It's insane."

David Bowie, Diana Ross, Madonna, Al Jarreau, Grace Jones, Sister Sledge, Daft Punk — and, of course, Chic. What do all of these artists have in common? Nile Rodgers. Over four decades, Rodgers has produced some of the most recognizable songs in pop music, and countless artists have sampled his work. His contributions to music are finally being recognized with his induction into the Rock and Roll Hall of Fame later this year.

Rodgers spoke with NPR's Michel Martin not long after giving a keynote address at this week's South by Southwest music festival in Austin. Read on for an edited transcript of their conversation, and hear an abridged version at the audio link.

Michel Martin: You said in your keynote that you actually used to be a snob about top-40 music. That's funny, for someone who's influenced four decades of music.

Nile Rodgers: Yeah, I was a super snob. I started out playing classical music and I had a great classical guitar teacher. And I had given a recital at the Library of the Performing Arts at Lincoln Center, but I realized as I was leaving the auditorium that I couldn't think of one black concert guitarist in the world. I was racking my brain and the closest I could get was Narciso Yepes. And I thought to myself, "Well, I can't play as well as he can play and I'll never be able to play like that!" So at that point, I quit studying classical and I switched over to jazz, and my jazz guitar teacher was probably the most influential person in my life next to Bernard Edwards.

And what did he say to you to get your head right?

And I went, "Whoa." I was stunned. Two weeks later I wrote a song called "Everybody Dance" — "do-do-do-do, clap your hands" — and it put Chic on the map.

You and the late Bernard Edwards, who co-founded Chic with you, had such a distinct sound. How would you describe it?

The way we used to think of ourselves was: Most R&B is gospel- or blues-based. We were not from the church — that wasn't our background. My background was classical music and modern jazz, which is bebop. So we were into what we called modal jazz, and what we did was we took modal jazz and started to write pop songs to it.

I understand that when Chic formed, you pretended you were a French band playing American funk music. Why is that?

That's exactly right. If you think about the history of jazz and the way that we saw ourselves, we noticed that a lot of jazz people, when they made it, they would go to France and do well. Look at Nina Simone -- even nowadays, like Tina Turner moves to Switzerland — because the people would have respect for you and they would treat you differently.

So we thought, "Huh, I wonder if it works the same way in reverse." Like if you came from France and came to America, would you cut out the middleman? Would you cut out the racism? And they'd just play you as music, they didn't think of you as: "Are you guys from Harlem?" [We'd say,] "Oh no, we're from Monaco" or something. We just made stuff up.

Before Pharrell blew up, when he was still behind the scenes, people kept asking him if he was somebody "other than," if his ethnicity was something "other than," and he would just say, "No, I'm just a regular black person." And I remember him telling that story and wondering: Has it changed? Has anything changed?

I don't know, because the labels don't support it, they don't believe that there's a viable industry that'll consume it. So it changes our entire way of thinking, it's — I'm not saying that a person should put their business at risk to make a political statement, but it is just the reality.

People find it really odd when we're performing somewhere, they say "hey, Mister" — if we do a music video or something — "Mister, do you really know how to play that thing?" Honestly, they do. True story. Especially younger kids, they're amazed that we actually can play.

Is that because of the rise of rap artists, or because music education... 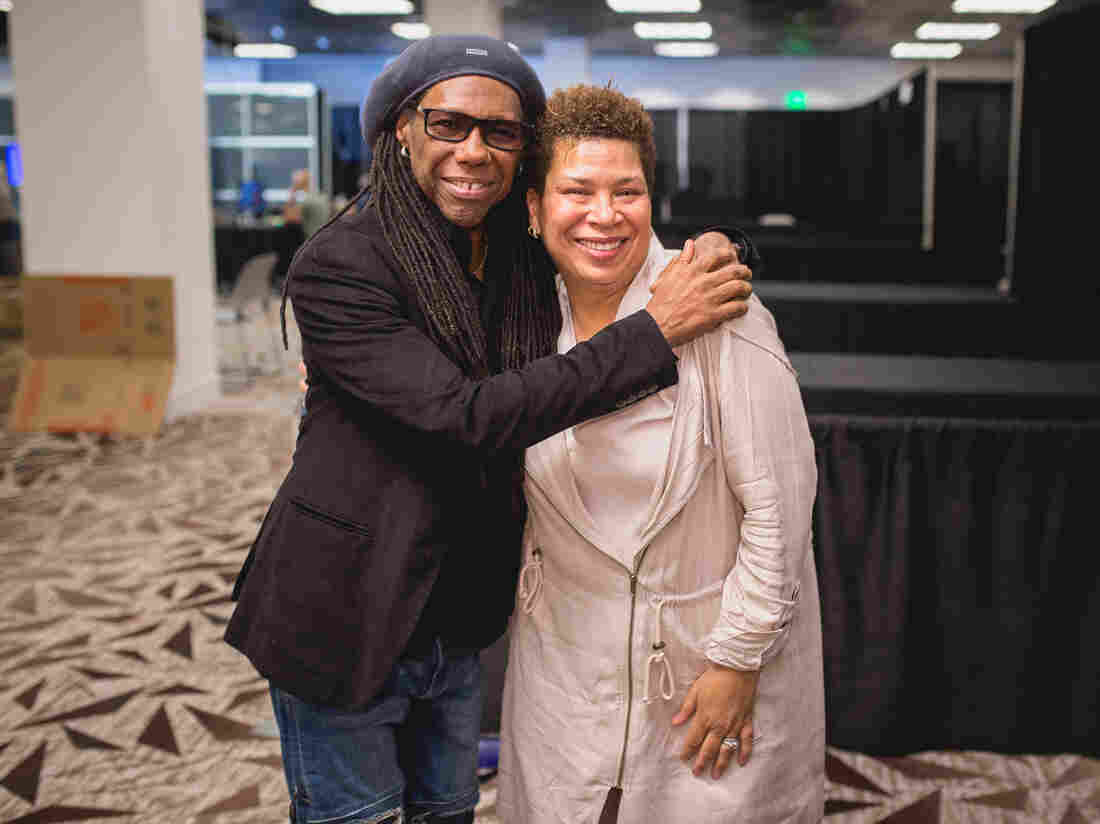 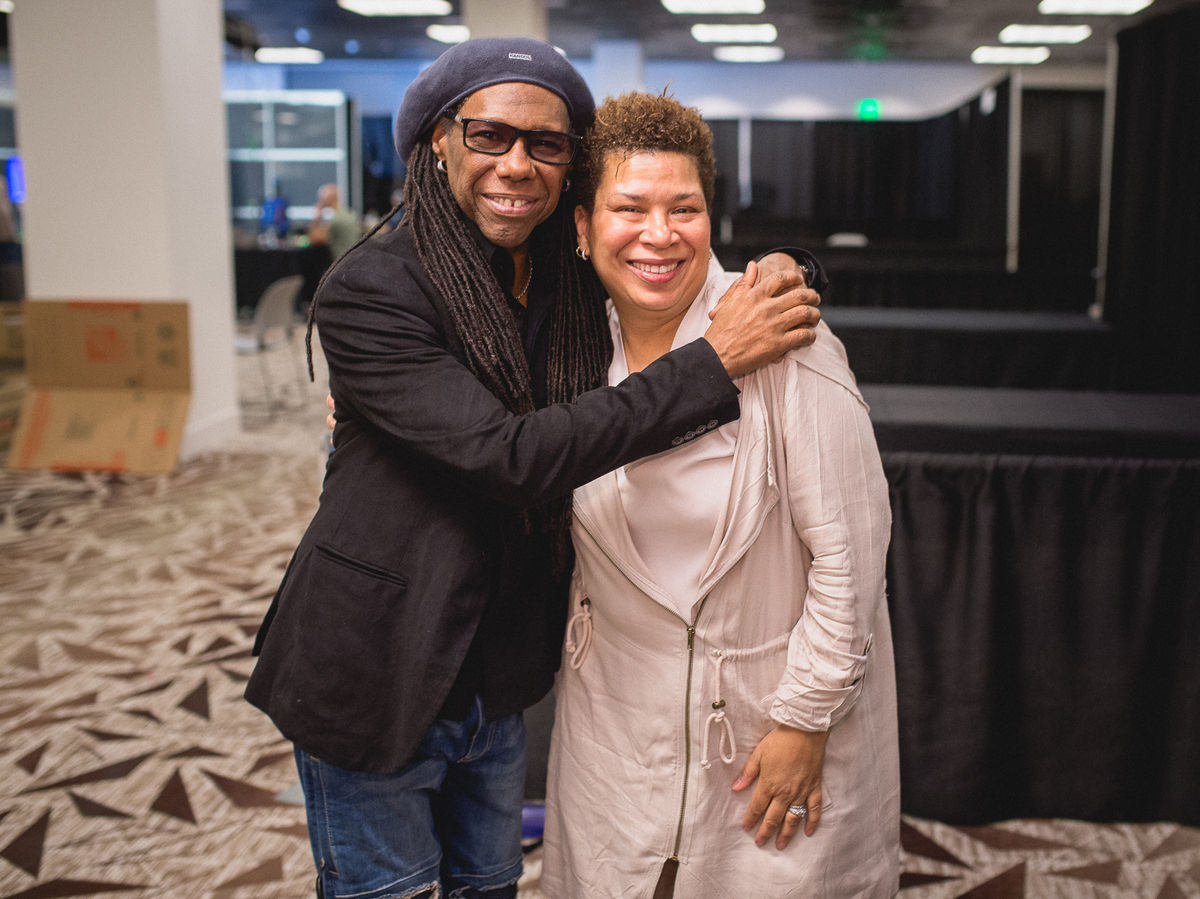 If it weren't for that standardization process, I wouldn't have fit in anywhere. Because usually, I was the only black person in an all-white school — and my parents were heroin addicts, so I was moving from place to place to place to place to place. But because of the standardized curriculum, I could always fit in. I was raised in a convalescent home in a hospital that was known for its early childhood development program, so by the time I went to regular school I was already reading, like, Melville. I had read Moby-Dick by the time I was 6.

You have such a lovely way about you, you have a very joyous spirit — but in fact, your story is very bittersweet. And you're finally being inducted into the Rock and Roll Hall of Fame.

Which is sort of funny.

Why is it sort of funny?

Well, because Chic is the most nominated band of all time. We were nominated 11 times, and Chic's not getting into the Rock and Roll Hall of Fame, only Nile Rodgers is. And I find that a little odd because if you think in terms of singular achievements, what we achieved from just 1977 to 1979 — 'cause after 1979, we never had another hit record ever again — but we never had a single that wasn't either gold, platinum, double-platinum or, in the case of "Le Freak," triple-platinum. Who has a triple-platinum nowadays? It's, like, impossible. No one else on Atlantic — there are two triple-platinum singles on Atlantic, that's it. And this is an illustrious company, this is a company with incredible history as far back as Ray Charles and Ruth Brown and all that stuff, and The Rolling Stones and Cream and Crosby, Stills and Nash.

So it's interesting that, in just those two short years, we were able to amass that amount of hit singles, and then we basically created — or certainly recreated — Sister Sledge. They never had a hit until we came in, and [We Are Family is] — as far as I'm concerned — the best album, pound for pound, that we've ever written.

I wonder if you have some advice for a younger artist coming up today, given all the complications that you've described.

Embrace failure. Love it. I honestly — this is gonna sound weird — I love the fact that we're the most nominated and not in the Rock and Roll Hall of Fame. I'm looking at it and I'm saying, "Top that record. Let somebody else get nominated 11 times!" If you can do that, I'll be really proud of you.

Before we let you go, I've got to ask you about some of your favorites. You said that David Bowie's Let's Dance was your best record you've worked on?

No, what I said about David was it was the greatest opportunity of my life, because I had five flops in a row. So I was just in a chasm — nothing was happening. I met David Bowie in 1982. At that point, Chic had broken up, I was out on my own, and David and I just formed this partnership that was very much like my partnership with Bernard Edwards. It was a person who had total faith in me, and that faith and trust was amazing because everybody else was saying "Disco sucks" and I suck — nobody would answer my phone calls — but David Bowie let me produce his record, and so much so that he let me steer the ship. It was the easiest record of my entire life. That album was done, start to finish, in 17 days.

I read that Chic was designed to put the music and the concept out front, not you and Bernard as performers. How does it feel now that you are out front?

Weird. It's weird, because I'm really just supposed to be in the band. The reason why I have to be out front is because no one else can tell the story. No one else knows the story. So I have to explain the story.

Gemma Watters produced the broadcast version of this story.