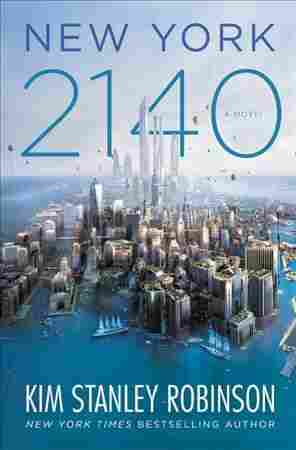 Early in New York 2140, two boys jump into their inflatable boat to begin the day's business, scavenging through the canals of a half-drowned New York. Since the weight of the engine threatens to sink the stern, the older boy sits up front to balance it out.

Much of Kim Stanley Robinson's significant body of work is built on small moments like these; beneath the vast scope of his futurist landscapes is a fascination with the everyday rhythms of resilience. It's no surprise, then, that he's drawn the New York of 2140 to be both dramatically altered and still the biggest small town in the world. A coastal water level 50 feet higher than today has reshaped both the physical geography and the civic ecosystem, but Robinson aims to make it feel like home. Sure, millions of clams have to filter the water in the new Manhattan intertidal zone, but commuters also have to decide if walking the skybridges is going to be faster than waiting for a vaporetto.

In true New York fashion, our disparate protagonists all come and go from the MetLife tower for a while before their plots begin to leisurely converge: Finance coders (and semi-squatters) Mutt and Jeff, who go missing after trying to hack the planet; cloud-video star Amelia; suspiciously-bro day trader Franklin; gruff social worker Charlotte; gruffer superintendent Vlade; gruffest police inspector Gen Octaviasdottir. Some of them feel fully realized, scraping through their daily circumstances — and the emerging conspiracies around them — while building low-key connections. Some characters, as can happen in Robinson novels, exist largely as vehicles for conceptual exposition.

'Aurora' Journeys In A New Direction

There are also interludes from an anonymous citizen that offer "info dumps (on your carpet)" about market mechanics, global warming, and human nature, reiterating that we've passed several points of no return: People "played with the global thermostat imagining they had godlike powers. They didn't." These interjections offer glimpses of what seems to be extensive research on New York (though Robinson's glaciers-to-tomorrow history of the island is noticeably light on mention of Native Americans), and ask us to face the reality that 2140 is a textbook rather than a science-fictional possibility.

Given that these interludes are scattered throughout a 600-page novel with a plot that doesn't quite require 600 pages, eventually they feel like a little much. ("Am I saying that the floods, the worst catastrophe in human history, equivalent or greater to the twentieth century's wars in their devastation, were actually good for capitalism? Yes, I am," our anonymous voice announces, in case you're still not sure if capitalist oligarchs can profit from tragedy.)

Honestly, this isn't a novel that cares to be subtle; it just wants its large-scale implications to feel uncomfortably close to home.

Honestly, this isn't a novel that cares to be subtle; it just wants its large-scale implications to feel uncomfortably close to home. Concepts and world-building take such precedence that the writing can fall flat sometimes. Nearly every introductory description of a woman seems like parody; a friend of Octaviasdottir's is "Five nine, 120 pounds, well distributed what little there was of her" and makes the inspector feel like "a big black female cop wedded to her job. Ebony and ivory, chess queens black and white, the supermodel and the glump, the capo and the copette, on and on it went."

But though Robinson accepts the inevitable — among his epigraphs is H.G. Wells' "What a beautiful ruin it will make!" — there's deep urgency in the details of this cautionary tale. It's a story that expects to be relevant sooner rather than later, and reminds us we can rarely see bubbles when we're in them, whether housing or environment — the magnitude of New York 2140's climate breakdown reads like dystopia until you realize just how close we already are to being too late.

And yet, what defines New York 2140, beneath its anger at toxic capitalism and its despair over inadequate environmental measures is the thread of hope that somehow, maybe, we might yet balance the boat enough to make it through the ruins.