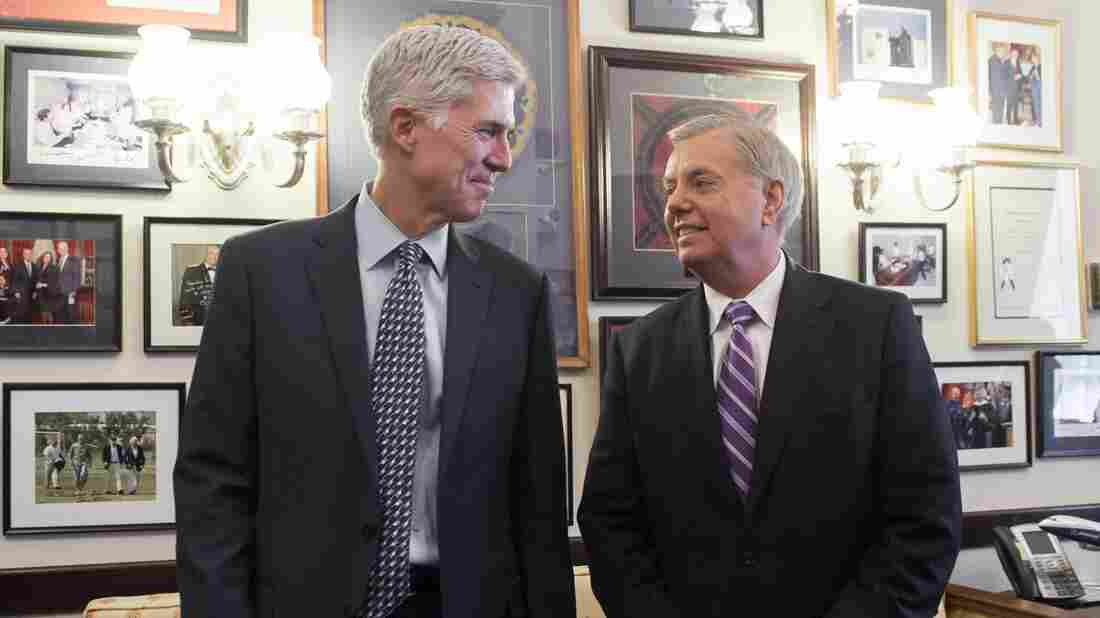 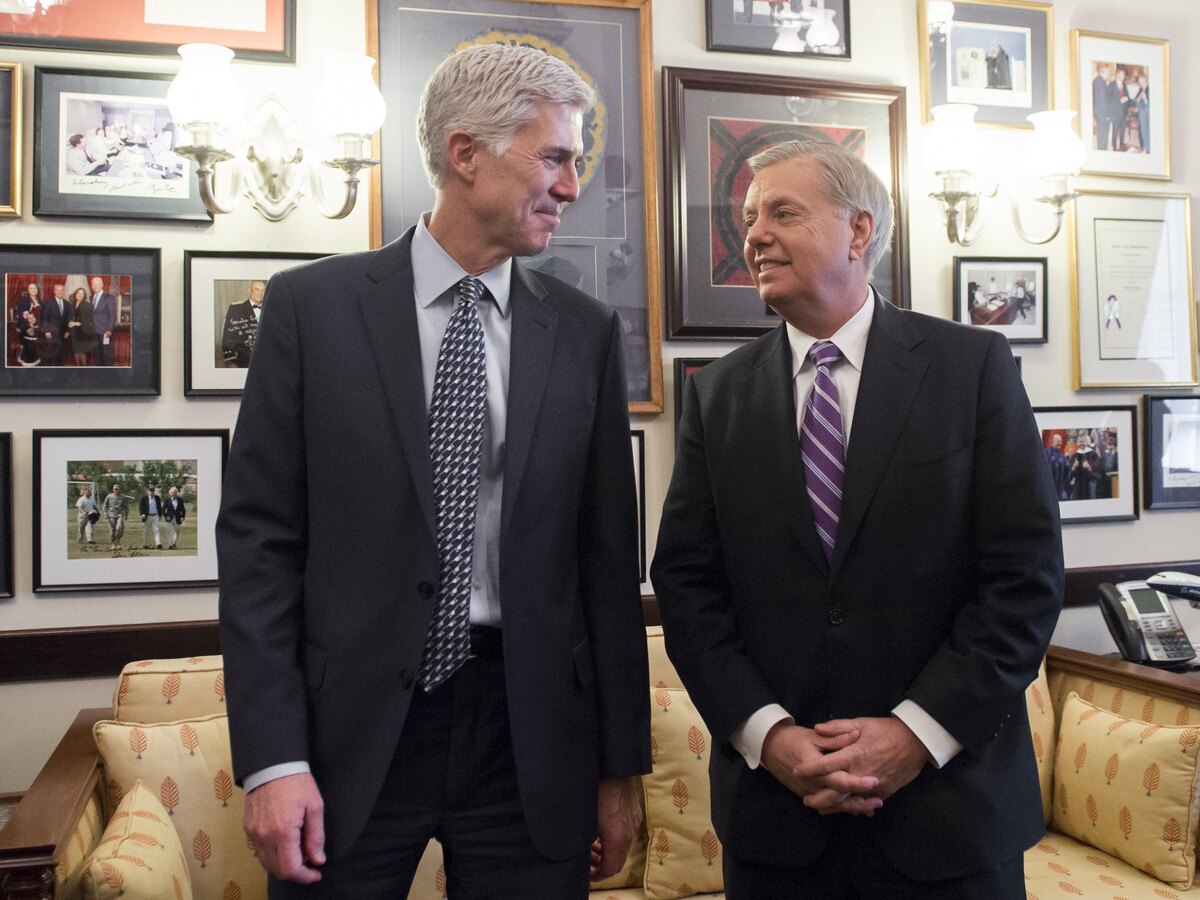 Judge Neil Gorsuch, pictured with Sen. Lindsey Graham, has met with 72 senators ahead of his confirmation hearings.

So far, Gorsuch critics have been having difficulty getting traction — having been trumped, as it were, by other controversies. But there has been plenty going on behind the scenes.

Gorsuch has met privately with 72 senators, and for the past week has been holed up with former clerks and Trump administration aides for mock hearings known as "murder boards," practicing for his public grilling. Robert Bork, who in 1987 famously went into his confirmation hearing the odds-on favorite for confirmation, refused to submit himself to these practice sessions, and paid dearly with a performance that made him sometimes sound arrogant and less than fully candid.

"Nomination is the phrase that would be technically used, but candidacy is really more accurate, given what the Supreme Court confirmation process has become these days," says Paul Clement, who served as solicitor general during the George W. Bush administration.

In anticipation of this week's hearings, liberal and conservative groups have been marshaling their forces for and against the nominee with TV ads and grassroots efforts. Though exact numbers are hard to come by, the liberals clearly are being outspent by wide margins.

The conservative Judicial Crisis Network alone has budgeted $10 million for the fight, aimed principally at 10 states Trump carried in the 2016 election and where Democratic senators will face re-election contests next year. In one ad, they say Gorsuch is "just who we need on the Supreme Court."

At previous confirmation hearings, critics have focused on big social issues like affirmative action or abortion. This time the critics' strategy is to portray Gorsuch as someone who's sided with corporations at the expense of regular folks.

Democratic senators are under enormous pressure from their left flank to resist the nomination, even though they privately admit the votes aren't there right now to stop Gorsuch.

Still, they are trying — and it doesn't take much for confirmation hearings to take an unexpected turn.

"Gorsuch might act like a neutral, calm judge, but his record and his career clearly show he harbors a right-wing, pro-corporate, special interest agenda," said Senate Minority Leader Chuck Schumer at a press conference last week. "Far too often, he sides with the powerful few over everyday Americans trying to just get a fair shake."

That theme is echoed in ads paid for by liberal groups ranging from the Alliance for Justice to People for the American Way.

The Democrats already have telegraphed another aspect of their strategy: If the nomineedodges, or refuses to answer their questions, that will be more fodder for their opposition.

"There is a plague threatening judicial independence here," Hatch said. "This plague takes the form of the [Democrats'] attempts to extract these sort of inappropriate answers, and Judge Gorsuch is wise to avoid that."

As Yale Law Professor Reva Siegel observes, no senator should ask questions that bind a nominee about how he or she will rule in future Supreme Court cases.

"On the other hand, it is totally appropriate and within role for the senators to explore the judicial philosophy of the nominee," Siegel says.

In truth, nominees answer as much as they have to. Then-judge Ruth Bader Ginsburg answered questions about some 30 already-decided Supreme Court cases when she was before the Judiciary Committee in 1993, but she had a long paper trail as a scholar, litigator and judge. Others, like Obama nominee Sonia Sotomayor and George W. Bush nominee Samuel Alito, nearly bored their inquisitors to death with repetitive answers that said as little as possible. All three were confirmed.

Charm and humor — which Obama nominee Elena Kagan and Bush nominee John Roberts excelled at — also go a long way. Judge Gorsuch is likely to have that skill as well, unless nerves or something else get the better of him.

One issue Gorsuch will have some difficulty dodging is his role in the Bush administration's war on terror. As principal deputy associate attorney general from 2005 to 2006, he played a significant role in some of the controversies involving so-called "enhanced interrogation techniques," including waterboarding. He also seemed to support an expansive exercise of presidential power at the time, a position that is especially of interest in the time of Trump.

Much of this is spelled out in tens of thousands of pages of Department of Justice documents turned over to the Senate Judiciary Committee last week — material that doubtlessly will provide further fodder for Democrats.

While not even the most critical Democrats deny that Gorsuch is an experienced and skilled judge, the question is what standard they should use in evaluating his suitability for the Supreme Court. For many Democrats, as Professor Siegel observes, that standard will have a great deal to do with the GOP's refusal to consider President Obama's similarly well-qualified Supreme Court nominee, Merrick Garland.

"There was a nomination on the table; it wasn't acted on as it should have been under the Constitution," Siegel says. That nearly year-long political stall, she suggests, should be the basis for evaluating the Republican nominee.

That would be well and good, except that the Republicans hold the majority in the Senate with 52 votes. In the unlikely event that Democrats could block Gorsuch with a filibuster, the Republican leadership would certainly exercise the so-called "nuclear option" and simply unblock the nomination by getting rid of the filibuster rule for Supreme Court nominations.

Privately, some Democrats would rather wave Gorsuch through this time without a filibuster, given that he is nominated to fill a seat previously occupied by a the similarly conservative Justice Antonin Scalia. These Democrats would rather save the filibuster for if there is a second Supreme Court vacancy during the Trump administration, threatening to fill a seat now occupied by a liberal justice.

But that sort of strategic decision-making is difficult at a time when the Democratic base doesn't see any benefit to cooperating with Trump.