Accessibility links
New York City Columnist Jimmy Breslin Dies At 88 Jimmy Breslin was an old school reporter. His techniques are still taught in journalism schools today as he continues to inspire new reporters to find the gravediggers, and tell their stories. 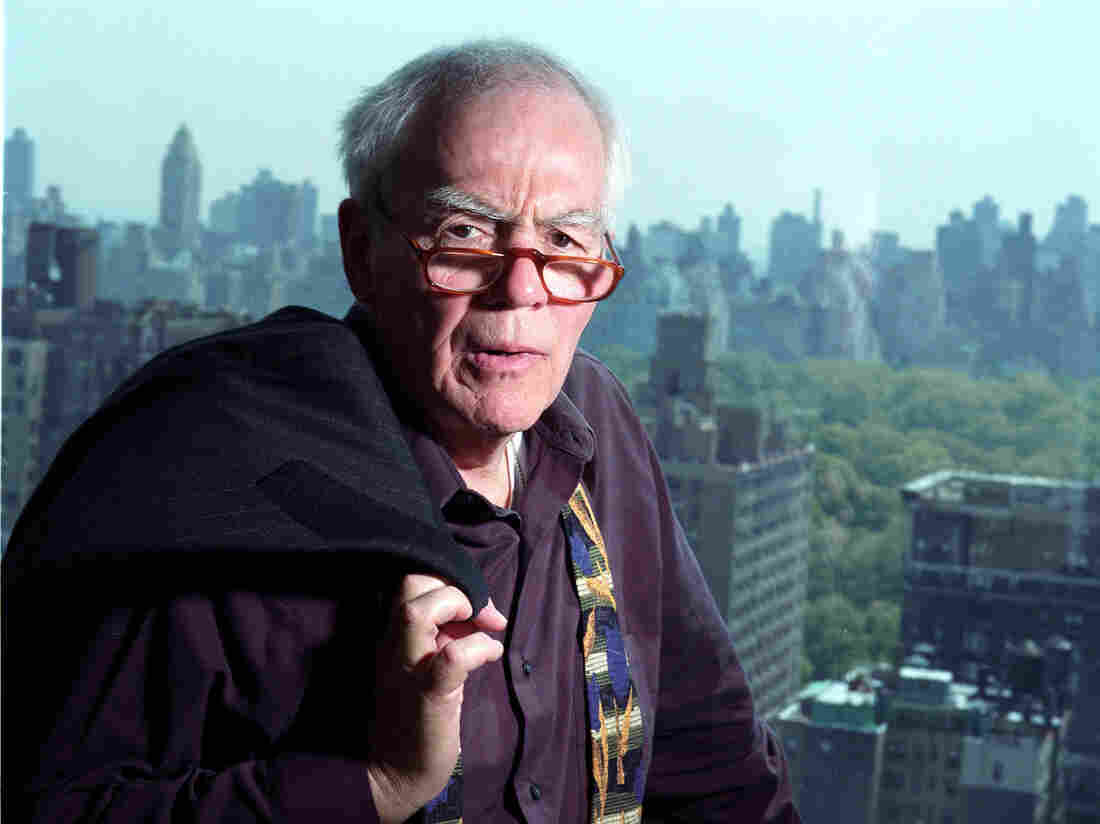 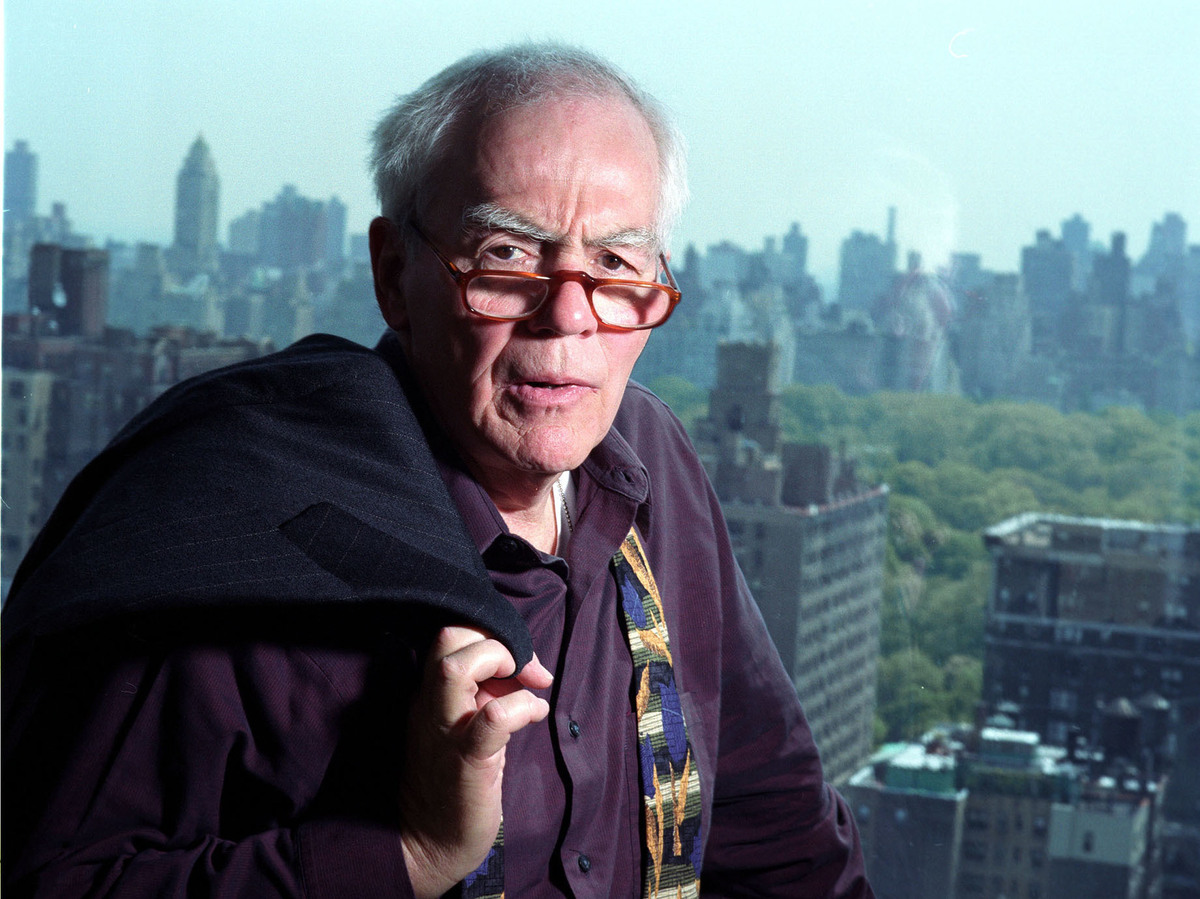 Pulitzer-Prize winning New York City newspaper columnist Jimmy Breslin died Sunday morning from complications of pneumonia. He was 88 years old, and his death was confirmed by his physician, William Cole.

Breslin was the tabloid voice of the little guy, famous for celebrating gritty New York City characters in newspaper columns, as well as several books of fiction and non-fiction, Often these characters lived in the less glamorous boroughs outside Manhattan. But Breslin was also a character in his own right.

Breslin was old school. He began his career as a copy boy working his way up to a hard -bitten reporter.

"At 5:00 at night at the New York Daily News you couldn't see from one end of the city room to the other because of the smoke," Breslin said in a 2004 interview. "Tremendous scene. Looked like an old fight club. And the noise of the typewriters was loud, like subway train running through. And out of all this noise and smoke came nervous energy. Words in a newspaper are made of nervous energy."

He wrote on deadline for 40 years, first gaining notoriety at the old New York Herald Tribune in the mid-1960s. There, a group of writers employed novelistic techniques that came to be known as the New Journalism. One of the best known examples by Breslin is still taught in journalism schools today. Published the day after President John F. Kennedy's funeral, the column focused on the man who dug the president's grave.

"Pollard is 42. He is a slim man with a mustache who was born in Pittsburgh and served as a private in the 352nd Engineers battalion in Burma in World War II. He is an equipment operator, grade 10, which means he gets $3.01 an hour. One of the last to serve John Fitzgerald Kennedy, who was the thirty-fifth President of this country, was a working man who earns $3.01 an hour and said it was an honor to dig the grave."

His nontraditional approach to the column, and how it left readers feeling that they were there, still inspires journalists to find the "gravediggers" in their stories.

"What he saw was that the guy you were sitting next to on the subway could have a dense complicated interesting life," says novelist Pete Hamill, a former newspaper man and close friend of Breslin's.

"He had a very sympathetic heart and I think he was trying to figure out 'Who are these people that I'm living with?' and that kind of curiosity made him into a terrific reporter and a very good novelist," Hamill says.

As a reporter, Breslin's sympathies were clearly with the have-nots in the world. Les Payne, a Pulitzer Prize-winning reporter himself, worked with Breslin at Newsday.

"We say that in journalism one of our goals is to comfort the afflicted and afflict the comfortable, but we almost never do it," Payne says. "I think that one of the things that Breslin has done over the years is to pay some attention to the afflicted in ways that journalism preaches, but so very often refuses to practice."

Another of Breslin's colleagues, Jack Newfield, said Breslin had a way with words.

Breslin won a Pulitzer Prize in 1986 for a series of columns that included investigative scoops on municipal corruption and police brutality. But to some, the characters he wrote about seemed too good to be true. These include an arsonist known as Marvin the Torch and a one-eyed mobster with a pet wolf. Breslin loved to tell the story about New York Times editor A.M. Rosenthal showing up at a bar in Queens where Breslin and some of the characters he wrote about hung out.

"He wanted to end my days of telling lies to the public," Breslin said. "So he walked in and Fat Thomas, who did not exist according to Rosenthal, Fat Thomas was at the bar, a fellow named Cousin was in the office cleaning a machine gun, Jimmy Burke, who subsequently did the Lufthansa robbery was at the bar and Peppy and Johnny MaGuire were there. Rosenthal was stunned. He said, 'My God, it's all true.'"

The newswriter becomes a newsmaker

Breslin had a knack for making news himself. In 1969, he ran unsuccessfully for city council president. In 1977, the serial killer who came to be known as the Son of Sam sent letters to Breslin at the Daily News. And a decade later after winning the Pulitzer Prize, Breslin was briefly suspended from New York Newsday after making racial and sexual comments to an Asian American colleague. He also suffered two vicious physical assaults, first at the hands of a reputed mafia figure. In 1991, he was beaten while covering the Crown Heights riots in Brooklyn. Breslin says that's what you had to endure if you wanted to write about your city.

Then in 2004, Breslin announced, in one of his columns that incorrectly called the election between John Kerry and George W. Bush, that he would stop writing them and end his newspaper career. But he wasn't done writing. Breslin's mafia tale, The Good Rat, came out in 2008. Instead of a gravedigger, the book's star, Burk Kaplan, had gotten involved with the mafia and gone to jail, but then found himself as a witness in a trial against two New York detectives who were indicted for acting as mafia hit men.

"Gangsters in the Mafia that are known, there's nothing about them but crime. Kaplan committed more crimes, but he did it in a suit," Breslin told NPR's Michel Martin in 2008. "He looked like he had the demeanor of somebody in the garment center, and he put together more crimes than they were able to think of, the gangsters. It was tremendous."

Throughout all his work, Breslin never stopped leaving his desk and going out to find the gravediggers.

"I still pursue the art of climbing flights of stairs. Go to the scene. Go ring the doorbell and ask the guy. Nobody does that," Breslin said. "It's an art that's going to come back however."

Breslin's words resonate with a new generation of reporters dedicated to the art of climbing tenement stairs. It would be well worth their time to read his work. Breslin himself would have told them so.