Accessibility links
As Colorado Gets Ready To Allow Pot Clubs, Indoor Smoking Still An Issue Recreational pot is legal in Colorado, but using it in public is against the law. Pot clubs are slated to open this summer, but the governor says he'll veto the bill if it allows indoor smoking. 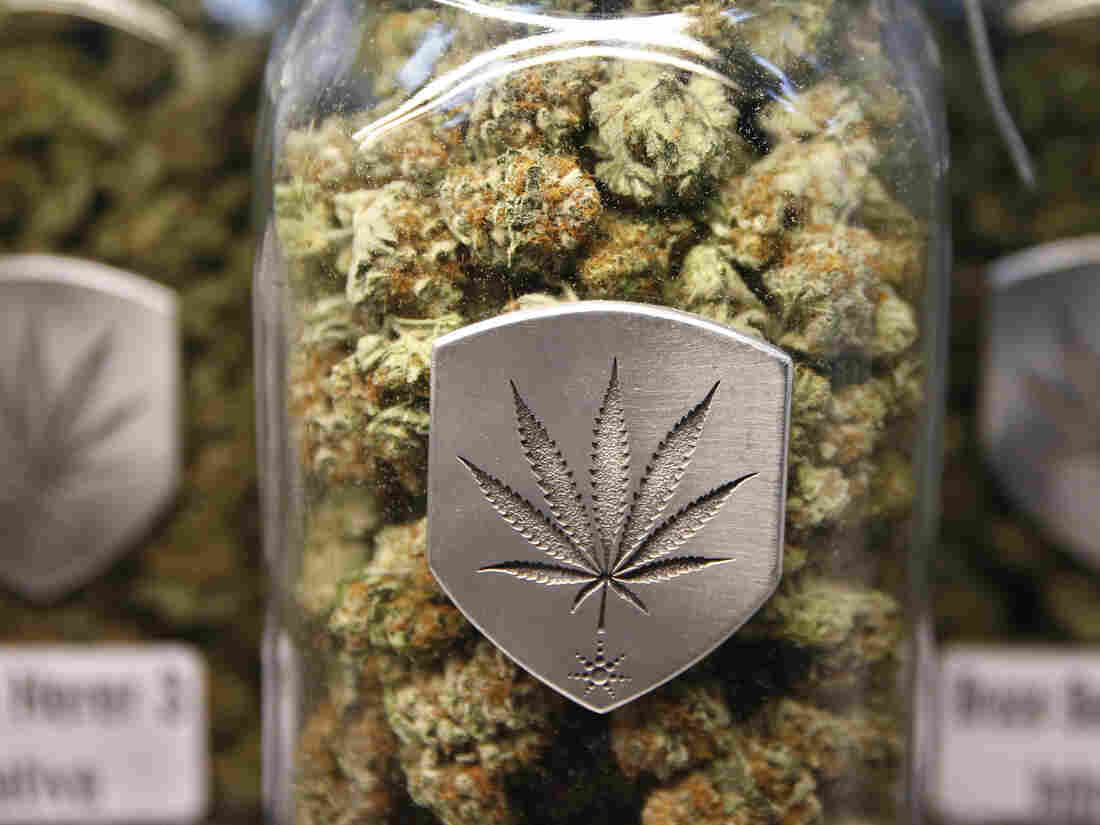 For three years recreational pot has been legal in Colorado, but using it in public is still against the law. That will change this summer when pot cafes are slated to open. Brennan Linsley/AP hide caption 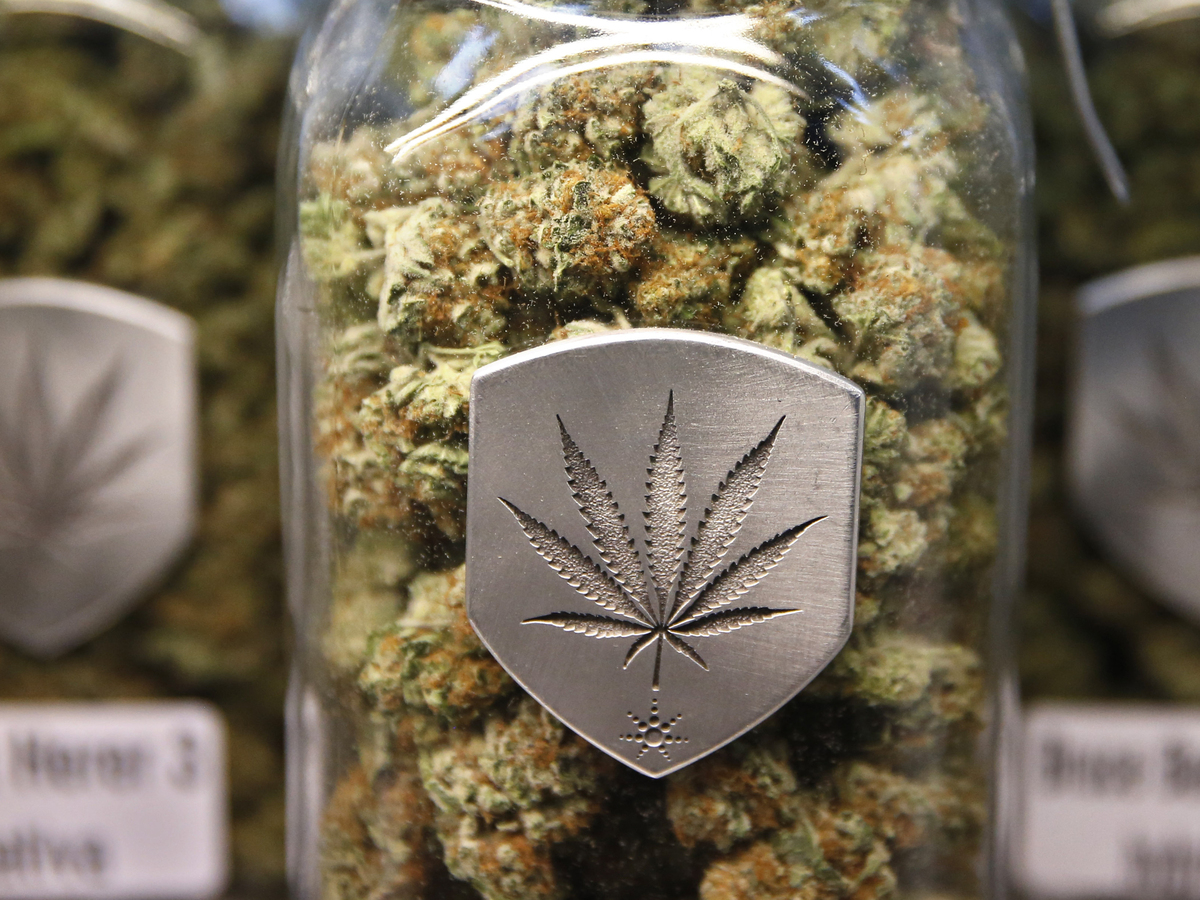 For three years recreational pot has been legal in Colorado, but using it in public is still against the law. That will change this summer when pot cafes are slated to open.

For three years, recreational pot has been legal in Colorado, but using it in public is still against the law. That will change this summer when pot clubs are slated to open.

A blinking "open" sign hangs on the outside of an old building in a dark industrial zone just outside the Denver city limits. When the front door opens, smoke billows out.

Inside is one of the state's few pot clubs, called iBake. Recently, members celebrated the anniversary of its opening.

Glassy-eyed patrons bounce off each other in the small space.

People can smoke pot in here because the club is private; you have to be a member. And it's outside city limits, away from city police.

It's not the easiest way to make money, but Steve Nelson Jr. started iBake to fill a need.

"It's recreation, so it's to have fun, it's to relax, it's to lounge," he says. "You don't necessarily want to do that just by yourself."

But that's exactly how many tourists, like Alberto Aviles, end up using it. Aviles was visiting from New York. He had no problem finding a place to buy pot at one of Denver's 150 stores, but aside from iBake, he couldn't find anywhere to use it.

"Even in the hotels, like the Ramada Inn, they gave me a problem, you know, tried to kick me out just off the smell," he says.

Hotel owners aren't the only ones happy to see that city and state lawmakers are close to permitting a mix of private and public communal places to use pot. It's something akin to what you'd find in Amsterdam.

Vicki Marble, a Republican state senator, says that's better than cops handing out tickets to tourists using pot in parks and on sidewalks.

"We do not want people coming on vacation and leaving on probation," she says.

Colorado Republicans have brushed off concerns from the Trump administration about the spread of recreational marijuana, throwing their weight behind a bipartisan bill at the state legislature that would officially allow private marijuana clubs.

But people would still have to B.Y.O.P., or bring your own pot.

"It's not ideal for consumers, but it is a step in the right direction," says Kayvan Khalatbari, a marijuana businessman and advocate for public pot consumption.

Seven other states have legal recreational pot, but among those seven, only Nevada is close to licensing public pot use.

"It's not only something that obviously Colorado's dealing with, but every single state that's legalizing recreational cannabis, this will be a conundrum that gets recreated," he says.

One conundrum is around smoking. Colorado, like many states, doesn't allow indoor smoking in public places.

But Khalatbari says half of Colorado's pot sales are for the type of marijuana you have to smoke. Many people prefer that.

"I don't like edibles," Khalatbari says. "I don't like the way they make me feel. I don't feel that vaporization gives me the sensation that I'm looking for"

Rachel O'Bryan has long fought against the expansion of pot. "Yes, I'm happy to be the bad guy who rains on the parade," she says.

She says no filtration system can remove all the second-hand smoke from a room. And Colorado Gov. John Hickenlooper has said he'd veto the state's pot club bill if it allows indoor smoking. Think outdoor patios and rooftop bars.

But O'Bryan's concerns go beyond that. She's worried that some proposals would allow any type of business — like a yoga studio or a laundromat — to permit marijuana use.

"You know, the encouragement of anything, whether it's alcohol or marijuana while you're going about your daily business of, you know, doing laundry — is that a good direction for society to take?" she asked. "And my guess is not."

She laments that again, Colorado is at the forefront of a big social experiment. She wonders what the effect will be on drugged driving or addiction.

No one knows for sure.

Ben Markus is a general assignment reporter with NPR member station Colorado Public Radio. You can follow him @CPRMarkus.

This story has been revised to make clear that in addition to Colorado, Nevada is close to allowing the use of marijuana in public.