Accessibility links
Sesame Street Introduces Julia, A Muppet With Autism Julia has bright red hair, big green eyes and she loves to draw. She can be a little shy, but Elmo and Abby Cadabby don't mind. She's voiced by Stacey Gordon, whose son is on the autism spectrum, too. 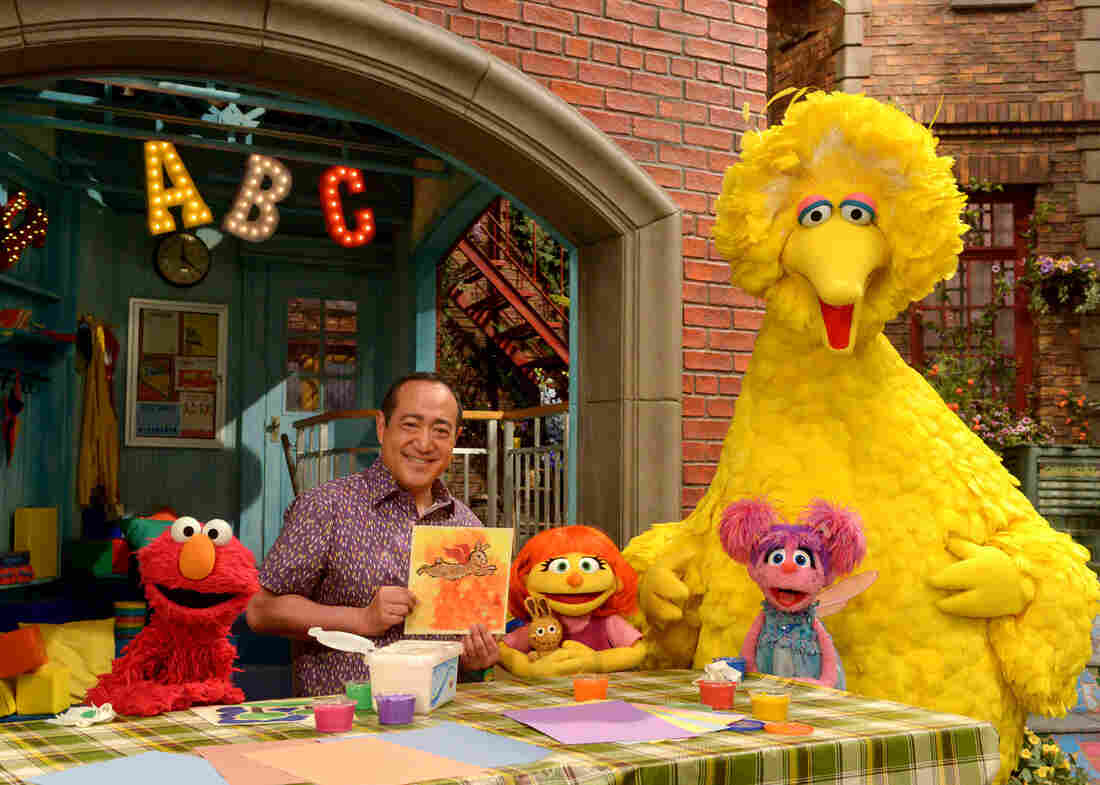 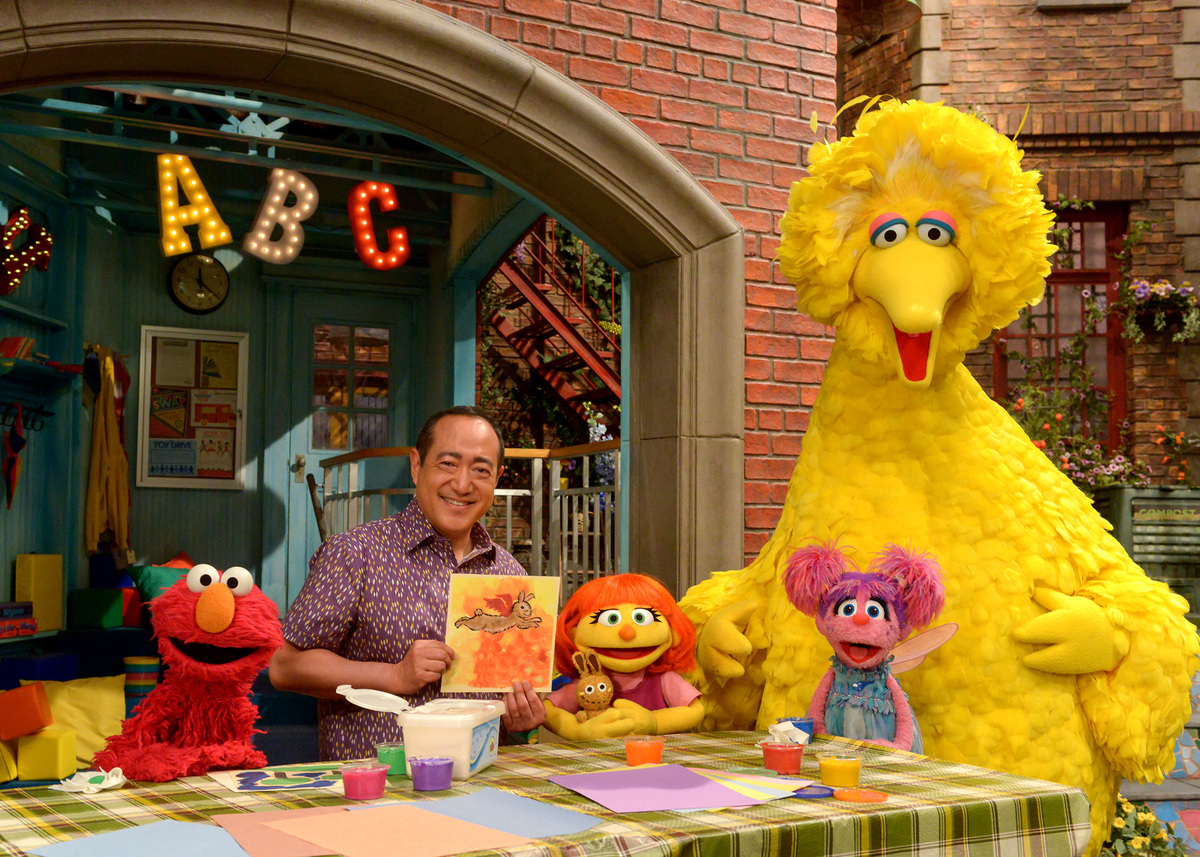 For the first time in a decade, the classic children's television show Sesame Street will introduce a new Muppet on the air.

Her name is Julia. She's a shy and winsome 4-year-old, with striking red hair and green eyes. Julia likes to paint and pick flowers. When Julia speaks, she often echoes what she's just heard her friends Abby and Elmo say. Julia has autism.

"There's so many people that have given her what she is. I'm just hoping to bring her the heart," says Stacy Gordon, the veteran puppeteer selected to play the part.

Presenting Julia to the gang requires a bit more explanation of her differences and hidden talents for the other Muppets — and their young viewers. As Abby Cadabby (the 3-year-old fairy played by Leslie Carrara-Rudolph) explained during NPR's recent visit to the set in the Astoria neighborhood of Queens, N.Y., it can be hard to get Julia's attention. Big Bird had to repeat himself to get her to listen, for example. And she sees things where others don't.

The role of Julia has a personal dimension for Gordon: She says she used do therapeutic work for people with autism. And Gordon says her son is on the autism spectrum, too. She believes the show will be a great resource — for students with the disorder and for their playmates.

"Man, I really wish that kids in my son's class had grown up with a Sesame Street that had modeling [of] the behavior of inclusion of characters with autism," Gordon said.

Jeanette Betancourt, senior vice president for U.S. social impact at parent company Sesame Workshop, has been helping plot the development of Julia for about three years. Sesame Workshop is a not-for-profit media company and an educational outfit that conducts its own research.

Betancourt says the introduction of Julia's character is a natural outcropping from other initiatives Sesame Workshop has done, pointing to programs for children with a parent who is incarcerated and for military families enduring deployments.

"Basically, in terms of vulnerable families, we're looking at families who may have particular stressors in their lives that are impacting their young children," Betancourt says, "whether it's economic or social emotional stresses or differences that they're handling at the time."

Parents of children with autism told officials at Sesame how important the show was for their kids. According to the U.S. Centers for Disease Control, one in 68 American children have autism.

Julia started last year as a character in Sesame's books and digital offerings. Sesame decided on a two-fold mission for the related campaign "See Amazing in All Children," to give children with autism and their families someone to identify with — and those that don't a window into their world. The materials appear on a dedicated site.

Sherrie Westin, an executive vice president at Sesame Workshop who oversaw the initiative, said the campaign quickly struck a chord.

"One of my favorite stories is a mother who said that she used the book to explain to her child that she had autism like Julia," Westin said, shaking her head slightly as she teared up. "This became the tool for her to have a conversation with her 5-year-old daughter."

The surfacing of a new permanent Sesame character is rare. Westin said it's the next logical step.

"We realized if we brought her to life appearing in Sesame Street on air as well, she would have even more impact [and] be able to reach even more children," Westin said.

The character herself is set to appear in two episodes in the current season and more the next.

"The character Julia, she has wonderful drawing skills. She's like a little budding artist," said Rose Jochum, director of internal initiatives at the Autism Society of America, which characterizes itself as the nation's oldest advocacy group for people with the disorder. "You know — autism — it brings wonderful gifts."

The society was one of 14 such autism groups consulted by Sesame Workshop. They often differ on how the disorder should be treated or addressed in public policy. Yet Jochum says they found common ground around Julia.

"She's one of the kids, she's one of the gang," Jochum said. "It's really meaningful to see her there, singing with Elmo, Big Bird and all the other characters. It's great."

A team of researchers from Georgetown University is studying how effective the program has proven for families who have experienced Sesame's autism materials. The researchers surveyed more than 1,000 families, more than a third of whom have children with autism. Preliminary findings suggest the material helps families with autistic children feel more comfortable incorporating them in broader community activities, and that families whose children do not have autism are more accepting of those kids who do.

The character Julia makes her television debut April 10 on Sesame Street on various platforms where the show's programs can be found, including PBS Kids, HBO and YouTube. She will initially appear in English and Spanish in the U.S., Australia, the U.K. and Mexico and will subsequently appear in more languages in countries throughout the world later in the year.

"It's not like there is a typical example of an autistic child, but we do believe that [with] Julia, we worked so carefully to make sure that she had certain characteristics that would allow children to identify with her," Westin said. "It's what Sesame does best, you know: Reaching children, looking at these things through their lens and building a greater sort of sense of commonality."