Accessibility links
Book Review: 'Bleaker House,' By Nell Stevens Nell Stevens retreated to a remote corner of the Falkland Islands in an attempt to write a novel. She came away with something better: This oddly winning memoir of deprivation, rain and penguins.

Hunger, Boredom And Disappointment Are A Literary Feast In 'Bleaker House'

Hunger, Boredom And Disappointment Are A Literary Feast In 'Bleaker House' 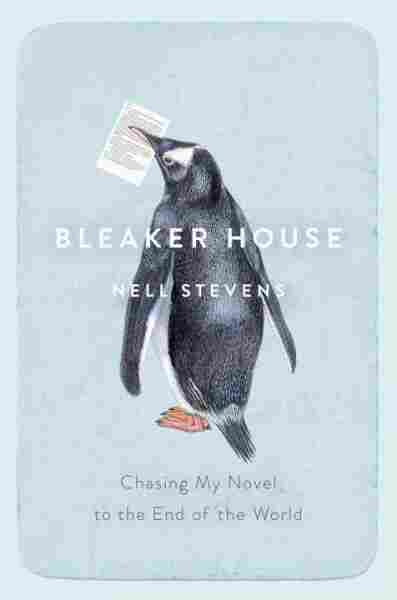 Chasing My Novel to the End of the World

When Nell Stevens, then a newly minted MFA, was offered the possibility of a three-month grant to go anywhere in the world to write, she pounced. Eager to avoid distractions and desperate to find something to write about, the 27-year-old Brit chose the weather-lashed, aptly named Bleaker Island, in the Falklands. "I do not want to have a nice time," she explains. "What I want — what I need — is to have the kind of time that I can convert into a book."

Bleaker House, with its nod to Dickens' novel, is that book – though not the novel she set out to write. Instead, it's an inventive memoir about a young writer's struggle to find her literary footing. Selections from Stevens' short stories and novel-in-progress make it clear how hard it is to write good fiction (her endings are particularly problematic). The deeper issue, she admits, is that she's not sure what she wants to say.

Chasing its muse to a remote, inhospitable island, Bleaker House is also stunt lit. Writers pull off all kinds of feats to fuel their work, ranging from literary gimmick (A.J. Jacobs' The Year of Living Bibilically ) to embedded reporting (Barbara Ehrenreich's Nickel and Dimed: On (Not) Getting By in America). Like Henry Beston, who chronicled a solitary year on Cape Cod in The Outermost House — not to mention Thoreau's Walden — Stevens retreats to the wilderness and writes about it. But she is no naturalist, and her focus is primarily on herself and her determination to be a published writer.

Stevens makes her intentions clear from the outset: "I want to go to a place, not just where I can write, but which I can write about." She also wants to test her capacity for solitude, a necessary part of the literary life. On both scores, Bleaker Island turns out to be a marvelous choice.

Stevens' descriptions show that she can indeed write. After a slow start — including a month of acclimatization and research in Stanley, the Falklands' capital, which boasts seven pubs but spotty Internet and no cinema – the book takes off when she flies to Bleaker. This treeless, roadless terrain, "eight square miles of rock and mud" occupied by cows, sea lions, caracara birds of prey, gentoo penguins, and sheep, is owned by a surprisingly chic, intriguing farming couple who, alas, are away for four of the six weeks of her stay.

Hunger, boredom and disappointment with her novel turn out to be bigger problems than the depression and loneliness she'd feared. Of course, readers of this oddly winning book know that her time wasn't wasted.

"Bleaker than what?" Stevens asks. "I had vaguely wondered this before arriving. Now, I know: it is just bleaker. I have begun to occupy a comparative world: I am colder, hungrier, more isolated. There is an unspoken final clause: than ever before."

Her narrative rises well above the whiny: "This is a landscape an art-therapy patient might paint to represent depression: grey sky and a sweep of featureless peat rising out the sea." Sensible research scientists plan their expeditions during the warm months; during her July and August visit — the Southern Hemisphere's winter — Stevens is pummeled by constant snow, hail, rain, and sleet. "The weather feels deliberately malicious," she writes.

Her preparations and calculations are fascinating in their specifics and shortsightedness. What, no Netflix? She's stuck with the only movie on her laptop, Eat Pray Love. From London, heeding strict weight restrictions, she has brought powdered soup, instant porridge, instant coffee, granola bars, almonds, raisins, and Ferrero Rocher chocolates, all totaling 44,485 calories. Necessary supplements include a gelatinous fiber drink and vitamin D. Divided by 41 days, it adds up to 1085 calories daily.

She regiments her time — calisthenics, 2500 words, long frigid hikes, a nightly chocolate — and acknowledges that it's an unsustainable, brutal regime, never mind a painful way to lose weight.

Stevens finds ways to amuse herself, making lists of things she'd Google if she could. Looking back on previous misadventures and failed relationships, it occurs to her that her 20s have been "a frantic and masochistic quest for good material, a wild attempt at atonement for an uneventful childhood." One wishes she'd turned her attention outward more, providing additional information about the island's history — and all those penguins and sheep, for starters.

Hunger, boredom and disappointment with her novel turn out to be bigger problems than the depression and loneliness she'd feared. Of course, readers of this oddly winning book know that her time wasn't wasted: "I feel as though I have pulled a rabbit from a hat I was about to put on," Stevens writes when she realizes she's leaving with the makings of a much better book than the one she'd planned. Among her discoveries and shared tips: Forget about "effortless concentration." Writing involves discipline, inspiration, and — let's face it — a bit of magic to pull that unexpected rabbit from your hat.