Accessibility links
Joe Biden Defends Threatened Affordable Care Act For Law's Anniversay The former vice president joined Democrats and supporters on the eve of the seventh anniversary of the law known as Obamacare, which Republican leadership hopes to repeal on Thursday. 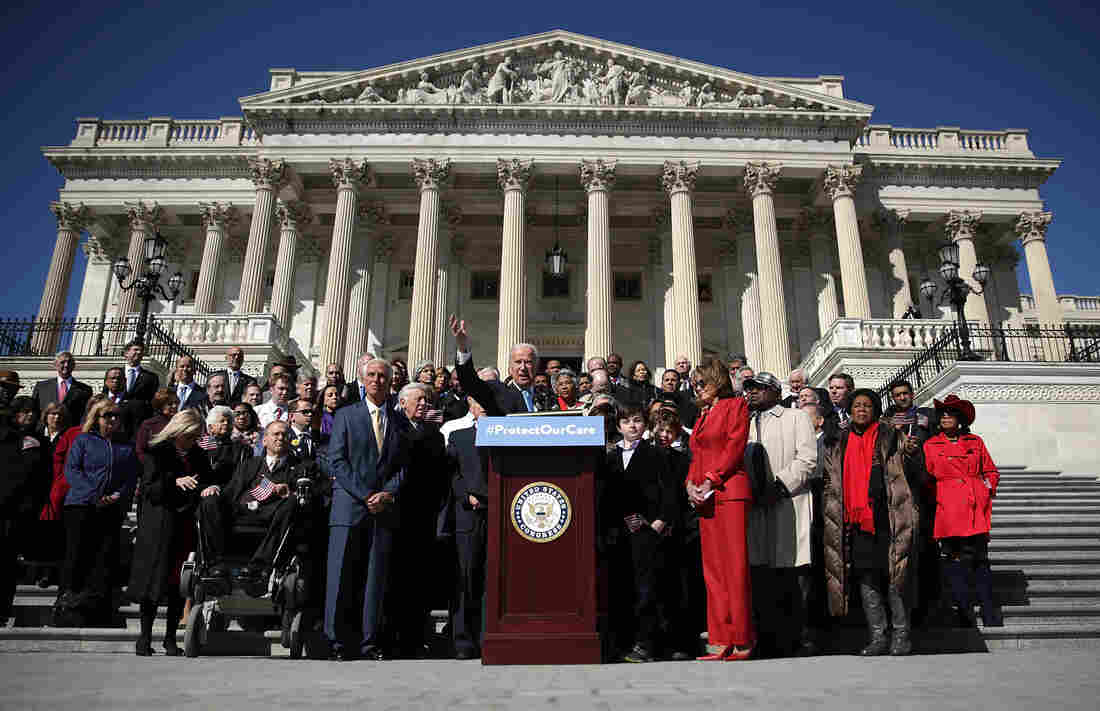 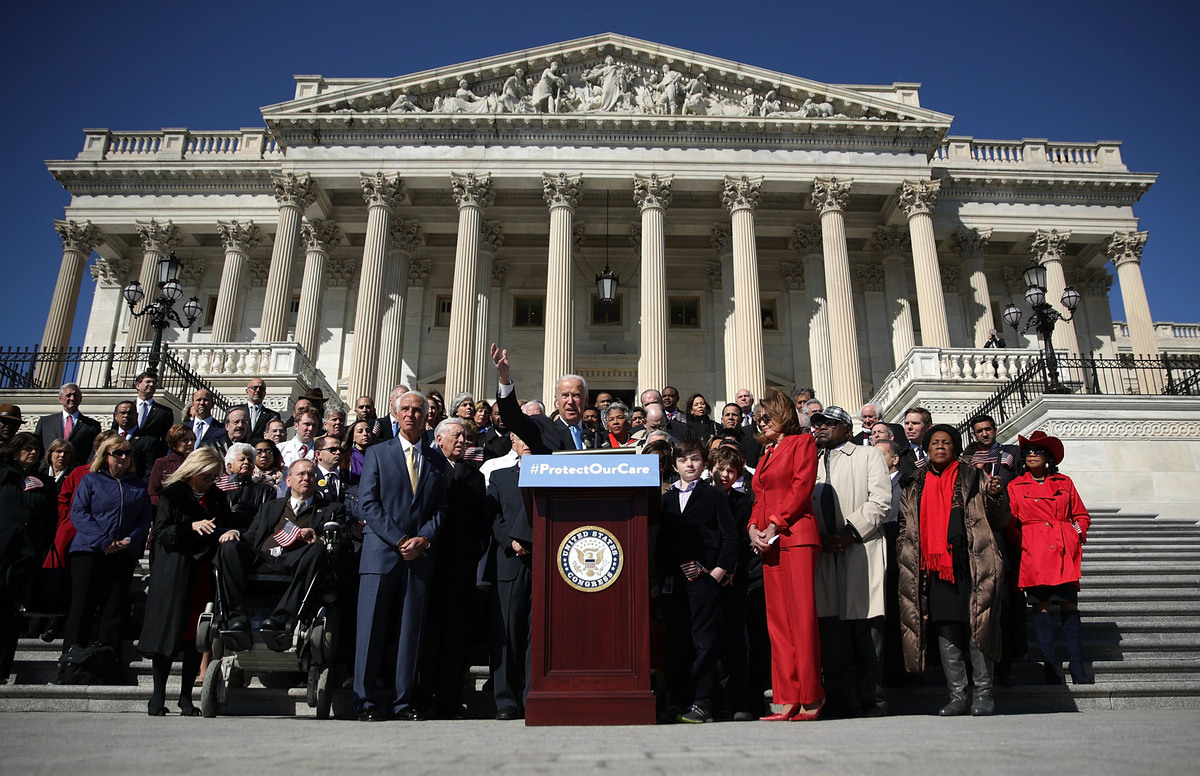 Former Vice President Joe Biden (center) speaks during an event held by Democrats on Wednesday to mark the seventh anniversary of the Affordable Care Act.

Thursday will mark seven years since President Obama signed the now-threatened Affordable Care Act before a crowd in the jam-packed East Room of the White House. It was the signature legislative moment of his presidency, underscored by then-Vice President Biden, who whispered into the president's ear that it was a "big f****** deal." The mic picked up the remark, which created quite a stir.

Now, Republicans hope to mark the anniversary with a successful House vote to repeal the law known as Obamacare. Democrats still hope to derail that effort — though their best chance lies in complaints about the GOP proposal by conservative Republicans, some of whom label it "Obamacare Lite."

As Vote On GOP Health Care Bill Nears, Find Out Where Members Of Congress Stand

So it was that Democrats marked the anniversary of the Affordable Care Act on the east steps of the U.S. Capitol building on Wednesday morning.

House Minority Leader Nancy Pelosi and Senate Democratic leader Chuck Schumer were there. Standing behind them were members of the House Democratic Caucus, as well as advocates for keeping the ACA in place — a rural hospital administrator from Illinois, the head of the National Physicians Alliance, a millennial entrepreneur who credits the health law with saving her company and a business owner whose family relies on its disability coverage. California Gov. Jerry Brown was there, too.

And so was Biden.

There were multiple references to Biden's indelicate moment at the White House on March 23, 2010.

"Now, if we can beat Trumpcare and prevent it from passing, it will be as our former Vice President once said, a 'BFD,' " Schumer said. He added, "Look, no matter how you slice it, Trumpcare is dangerous and would hurt Americans in all 50 states."

Pelosi said of the Republican proposal, "Less care for more money. Pay more, get less. Premiums and out-of-pocket costs will go up. Coverage will be reduced." The Democratic leader added, "And all of this to give a tax break to the wealthiest people in our country, and corporate America, especially the pharmaceutical and insurance companies."

Each speaker, in his or her own way, stressed that the Affordable Care Act — endangered as it is today — remains a very "big deal."

Biden was the final speaker. He also recalled his long ago quote, saying, "Thank God my mother wasn't around when that comment was picked up."

He spoke of how he told Obama back then that the Affordable Care Act would give peace of mind to a lot of people Biden grew up with in places like Scranton, a working-class town in northeast Pennsylvania. But he also said they knew that the law would need to be improved and adapted once passed.

"Just like when Social Security was passed, there'd have to be improvements made. We'd watch it and see what happens," Biden said on Wednesday. "And improvements are all doable. They're all within our wheel-house." But the former vice president stressed that the way to fix it is not to scrap it. "Eliminating the Affordable Care Act means eliminating things people badly need."

Biden stepped away from the mic after a relatively short, six-minute speech. Pelosi thanked him for joining them.

Biden leaned back into the mic, "I ain't going anywhere. This is not going to pass."