Accessibility links
Book Review: 'The Devil And Webster,' By Jean Hanff Korelitz Jean Hanff Korelitz's latest is set at a tony New England college rocked by racial unrest. It's a suggestive exploration of tough issues, but lacks the nuance and intellect of the best campus novels.

'The Devil And Webster' Explores Tolerance, Inclusion And Identity

'The Devil And Webster' Explores Tolerance, Inclusion And Identity 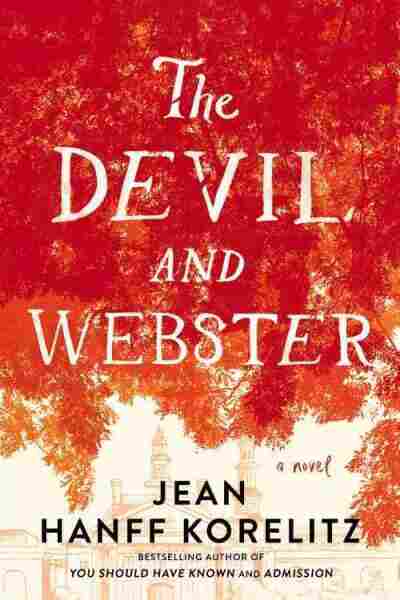 The Devil and Webster

The university just lends itself to delicious mysteries: that combination of youth, intellectualism, hierarchies, and wealth, plus a contained and exclusive campus as ripe for wrongdoing as one of Agatha Christie's remote country houses. But The Devil and Webster, while intelligent, is an underwhelming contribution to the genre.

It is set at Webster College, an apparent haven of white marble and elite liberalism working to shed its ugly colonialist past. President Naomi Roth, erstwhile feminist radical, reigns with a tolerant hand, but the fantasy begins to sour when a popular black professor is denied tenure. Student protesters, led by the professor's magnetic Palestinian protégé, call it racism. Naomi knows it's a case of plagiarism, but can't break the confidentiality of tenure proceedings, even as the scandal grows.

Overnight, Naomi sees herself transformed from "the kind of university figurehead any undergraduate might be super stoked to grab a beer with (or invite over for a vegan potluck and a life-altering chat about the Bloomsbury Group)" to The Man. Refreshingly, Korelitz has staked no political ground, and mocks the self-righteous left and self-righteous right with equal skill.

Although The Devil and Webster skillfully captures "the swamp of ideological ferment that was American higher education (subdivision: Liberal Arts), New England," it lacks the intellectualism of the best campus novels. Here, the campus as an academic institution seems almost beside the point. Naomi is an administrator first, and for all of her professed interest in learning, diversity, difference, and dissent, we don't see her thinking about any of these with particular insight.

In particular, the inclusion paradox is one that is more gestured at than interrogated. Paradises, worldly and otherwise, operate through evaluation, exclusion, and the careful withholding and distribution of privileges. People like to spend time with people with their interests and approximate SAT scores, and universities are designed, at the most basic level, to keep people out (and once they are in, to keep them in their places — as students, grad students, adjuncts, and at various strata of professorship). At one university I attended, only those with specific professorships were allowed to walk on certain hallowed patches of grass.

Although 'The Devil and Webster' skillfully captures "the swamp of ideological ferment that was American higher education (subdivision: Liberal Arts), New England," it lacks the intellectualism of the best campus novels.

The liberal arts school obscures this truth with seminars and diversity trainings and town halls and coffee hours boasting "All are welcome!" The promise is that they are, if not inclusive, equally exclusive to people of different backgrounds, and of course, that promise is rarely fulfilled. Biases saturate admissions as they do everything else, and endowments are made with quiet assurances that various scions of industry will be admitted in exchange. These tensions make up the meat of The Devil and Webster, but the meal is ultimately a meager one.

Naomi's inner world — her story and friendships — could make up for some of this lack of theoretical heft, but as a character she's flat, blindsided by easily predictable events, and the relationships that take up much of her attention aren't well-developed. The professor denied tenure and the Palestinian student are instructive symbols rather than people — a move that deftly highlights the ways black and brown people can be used as props within institutions, but still leaves something human and essential lacking.

The Devil and Webster is a suggestive exploration of what tolerance, inclusion, and identity mean, but the nuance stays submerged in that ideological swamp. As academics like to say when they don't know the answer to a problem: "This would be a fruitful area for further research."