Accessibility links
Stream Selections From Bob Dylan's Upcoming Album, 'Triplicate' The Nobel Award winner digs into the Great American Songbook for a third time. Stream a selection of songs from the three-disc set.

Stream A Selection Of Works From The Upcoming Three-Disc Set 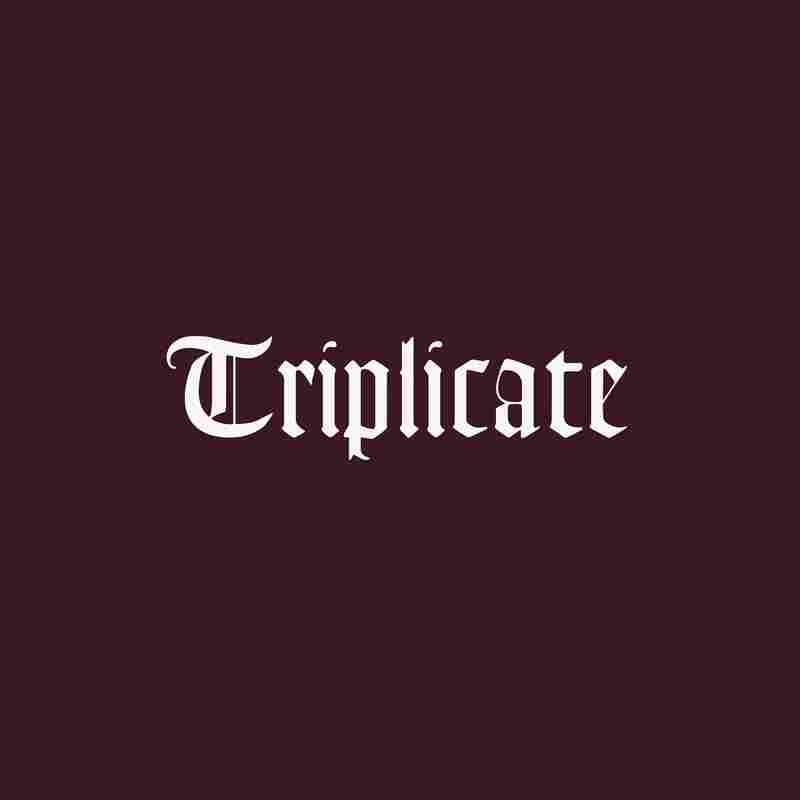 Bob Dylan is evidently not finished with his (grand, now exhaustive) inquiry into the Great American Songbook.

The 2016 winner of the Nobel Prize for Literature, who was hailed by the Swedish Academy for "having created new poetic expressions within the great American song tradition," is releasing a three-disc mega-dose from the pre-rock era of that tradition on March 31.

Triplicate, recorded at Capitol Studios in Los Angeles with Dylan's touring band, follows two similar efforts – Fallen Angels (2016) and Shadows in the Night (2015) – and is his 38th studio release. Its 30 songs bring Dylan's recorded output of standards to just over 50 – or seven more than the 43 songs contained on his world-shaking landmarks Another Side of Bob Dylan, Bringing It All Back Home, Highway 61 Revisited, and Blonde on Blonde.

The sheer volume of material prompts a distancing step backward: What is going on here? What's the intention behind this extra-large serving of unabashedly romantic tunes? La La Land notwithstanding, these compositions are out of step with contemporary culture; as Dylan sings on "September of My Years," they "reach back to yesterday" with jazz-age chords and quaint lyrics about quaint courtship rituals. It's fair to say that few in Dylan's core audience know these tunes, and even fewer have been waiting for their revival by a 75-year-old road warrior with a compromised vocal instrument.

In the past, it's been possible to dismiss Dylan's crooner jag as a lark, an old man's sentimental journey, the Early Bird Special version of Carpool Karaoke. Now, tripling down on swing with a slow, slinky version of "Sentimental Journey" and a languid "Stardust," Dylan appears – and sounds – deeply committed to this music. He seems to be saying something major about the art of the song, about what constitutes a song.

Here's a theory: Maybe all this time on the bandstand of the mythic Starlite Ballroom has left Dylan alarmed about the current state of popular song. He's checked out the works of the reigning superstars and observed – because for all his poetry, he's also a systems/structure guy – that most of what's successful today centers around static harmony (looped one or two chord vamps) and three-note melodic lines that resemble playground taunts. High tech production masking a deficit of melody. In terms of musical sophistication, they're a long, devolved way from the sweeping grace of "Stardust."

Dylan is not the first to notice this, of course. (And, it should be noted, lots of latter-day pop stars have schmaltzed their way through the Songbook, to lucrative ends.) But Dylan occupies a unique place in music. Having written so many songs that profoundly upended conventional wisdom about what a song could be, his decisions have some gravitas. Dylan going deep on tunes written for Broadway musicals and WWII-era pop stars can be read as an act of radical conservation – the work of a Noah figure who's out to rescue not just specific songs but an entire approach to songwriting. A discipline. An ideal.

Because as Frank Sinatra and Chet Baker and countless others knew, the concise songs of the Songbook era are magical self-renewing energy systems. In the space of just 32 measures, less than a minute, they lay out an idea or narrative, develop it, take it into a different tonality for new perspective, and return "home" in a way that makes listeners want to take the ride again.

The composers – and among those covered on Triplicate are Harold Arlen, Cy Coleman, Hoagy Carmichael – created winding-path melodies that are challenging to sing casually, yet somehow burrow into the ear. Around those, they created winding-path chord sequences that detour abruptly into different keys and inspire endless variations as the tune unfolds. Examine the formative work of Dylan, Chuck Berry (RIP), The Beatles, any significant rock-era figure, and you find that at one point or another, they came to understand and appreciate the structure of the standard tune, along with related structures like the blues. In every case, that understanding became crucial to the development of their own material.

Dylan seems keenly aware of this debt; he moves with great reverence through these melodies, catching the neon-sign emotions and the more delicious whispered grace notes between them. He understands the innerworkings of a song like "These Foolish Things," which tells how small things, like "a tinkling piano in the next apartment," trigger the memory of a long-gone lover. In his version, the nostalgia hangs in the air like stale smoke, and his wise, old, serrated voice does illuminating justice to the pain of looking back. Dylan sings it at close range and at human scale – he's sketching the intimate moments that make up a life, and pulling from them universal truths about longing and loneliness, the way all the great singers have done. On that song and others, his interpretations seem gentle, methodical and profoundly intentional – it's like he's mapping the DNA of these tunes for future generations.

The title, Triplicate, suggests old mimeograph technology, and implies that the three individual 10-song journeys are mirror images of each other. That's not the case really, though there are a lot of ballads here, and they move in a tempo range somewhere between "stately crawl" and "stillborn rubato." Likewise, there are more than a few medium-tempo tunes that land in that zone between "senior-center foxtrot" and the cadence jazz drummers once derisively referred to as the "businessman's bounce." There are, however, plenty of moments of sublime grace, and many of them are authored (or enhanced) by the guitar team of Dean Parks, Charlie Sexton and (on breathtakingly weeping steel guitar punctuation) Donnie Herron.

Given the scope of this project, some rhythmic repetition was perhaps inevitable. What's remarkable is that things rarely bog down. Now fully inhabiting the crisp snap as well as the breathy nuances of swing, Dylan's band hums with a serene authority, never overloading the music with showmanship. They leave enough space for the old guy to do his thing – and as he sings these mountain-scaling melodies and conjures the ghosts of vanished lovers hovering over the verses, he doesn't just bring these songs back to life. He makes a pretty good case for why they should live forever.