Accessibility links
Trump Ultimatum For House GOP: Vote On Health Bill Or Obamacare Stands The message delivered by Budget Director Mick Mulvaney came after a vote was delayed. House Speaker Paul Ryan came out of the GOP conference Thursday night and said they would proceed on Friday. 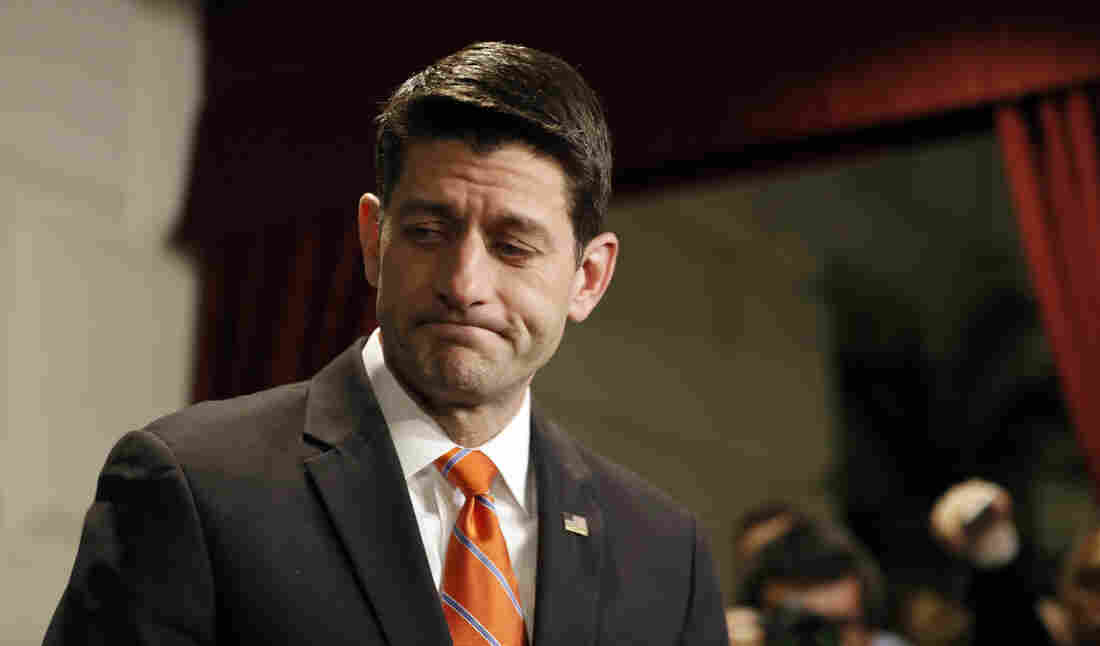 House Speaker Paul Ryan told the media Thursday night that the House would be "proceeding" with the Republican health care bill on Friday, after a meeting with lawmakers. Thursday's vote had been delayed. Alex Brandon/AP hide caption 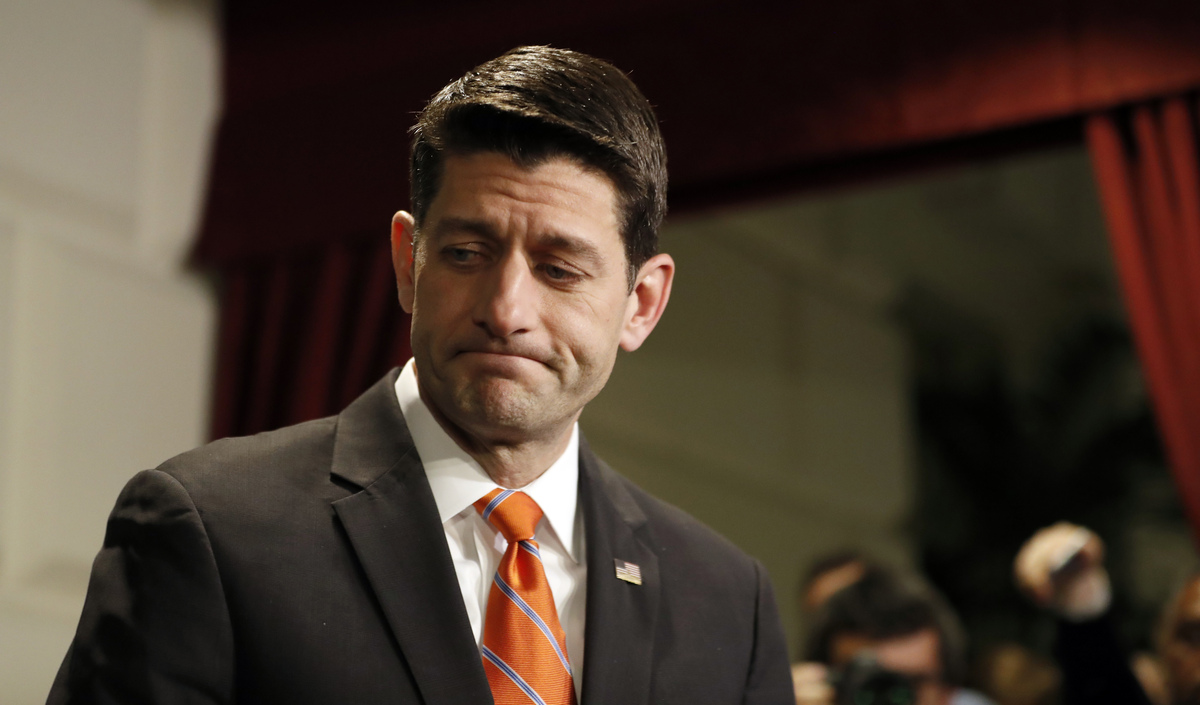 House Speaker Paul Ryan told the media Thursday night that the House would be "proceeding" with the Republican health care bill on Friday, after a meeting with lawmakers. Thursday's vote had been delayed.

The White House issued an ultimatum to House Republicans on Thursday: Vote for the current GOP health care replacement plan or leave the Affordable Care Act in place and suffer the political consequences.

President Trump is done negotiating over the health care bill and wants a vote on Friday, Office of Management and Budget Director Mick Mulvaney told lawmakers. The former South Carolina congressman said that if the House does not pass the bill, the president is moving on to other priorities and leaving the law known as Obamacare in place, a source who was in the meeting tells NPR's Susan Davis.

House Speaker Paul Ryan emerged from the GOP conference meeting to issue a terse statement: "For seven and a half years we have been promising the American people that we will repeal and replace this broken law because it's collapsing and it's failing families. And tomorrow we're proceeding." Ryan then left the gathering of reporters without taking questions.

Trump Faces Critical Phase, As He Tries To Make His Rhetoric Reality

Majority Leader Kevin McCarthy indicated a short time later that the Rules Committee will meet Friday morning to set the terms for debate. He hopes to have a vote by the afternoon so lawmakers can get home for the weekend, but there are still plenty of reasons that a vote could get delayed into Friday.

The Republicans' longtime campaign pledge is in peril just as they have finally wrested control of both the legislative and executive branch.

From the start, the health care replacement plan has had Republican defectors from both the right and the center.

Thursday's planned vote was postponed when it became clear the votes were not there to pass the bill. There's little indication, though, that a delay in the vote could move the whip count.

Trump, famous for his deal-making abilities, has tried to woo both unhappy factions of the GOP conference with little success. No consensus was reached during a meeting with the president and the roughly 40 members of the House Freedom Caucus at the White House earlier Thursday. Vice President Pence met with the maybe two dozen moderates in the so-called Tuesday Group, many of whom are also opposed to the bill.

Obama: 'America Is Stronger Because Of The Affordable Care Act'

White House press secretary Sean Spicer had insisted — about an hour before the delay — that the vote for the night was still on. He tried to spin the meeting with the Freedom Caucus as a "very positive step."

But that's not the same thing as having the votes.

Republican leadership can lose up to 22 Republican votes and still pass the legislation. (That's if everyone who is supposed to vote does so. With the full 435 House members voting, it takes 218 votes to pass. But there are five vacancies, and Democratic Rep. Bobby Rush of Illinois, who is dealing with the death of his wife, is not expected to vote. That drops the total to 429, a majority of which is 215. That's the magic number if everyone votes. There are 237 Republicans.)

Mark Meadows, a representative from North Carolina and chairman of the Freedom Caucus, emerged after the meeting with the president and said there was still no deal.

In Final Hours, GOP Leaders Scramble For Votes On Bill To Gut 'Obamacare'

It's a familiar story — Republicans, once again, unable to hold their fractious conference together to get enough votes. It happened continually during the Obama presidency.

John Boehner, when he was speaker of the GOP-controlled House, once likened his job to keeping 218 frogs in a wheelbarrow.

But this is a crucial first test of Trump's and Republicans' ability to govern. It's the first time in a decade that the GOP has control of the House, Senate and White House.

For many members, this is their first time legislating under a Republican president. That has presented opportunity — and complication. Throw into the mix that Trump did well in many of the Freedom Caucus' members' districts in the presidential election, and you have a complex, intertwined political situation.

The Tuesday Group is seen as being steadfast in its objections to the bill — that it would drive up the cost for seniors and increase the rolls of the uninsured.

That puts a lot on the Freedom Caucus. Despite Trump's popularity in their districts, many of those Freedom Caucus members have steadfast ideological objections to this bill, too.

For one thing, it keeps premiums too high, they believe. Dave Brat, a Virginia representative who defeated former Majority Leader Eric Cantor, said he wants to see an "ironclad" document from the White House that shows premiums would be lowered under this bill.

The Congressional Budget Office estimated that the bill would increase premiums as much as 15 to 20 percent in the short run. The caucus believes that to lower those premiums, it's necessary to cut "essential health benefits." Those are types of coverage that insurance companies are required to provide.

Of course, that is a nonstarter with moderates.

Many of those Freedom Caucus members would also like to eliminate popular provisions, like allowing children to stay on their parents' plans until age 26 and requiring insurance companies to provide plans for those with pre-existing conditions. That, however, is seen as nonnegotiable.

And they'd like to see the Medicaid expansion funds to states sunset sooner than 2020, as is proposed in the current bill. The CBO, however, projects 24 million people could lose their health insurance under the Republican health care plan, most of that from the proposed Medicaid rollbacks. That presents Republicans with a potentially very dicey political situation ahead of the midterms and next presidential election.

Spicer said Trump was working the phones through 11 p.m. ET Wednesday night. If this bill fails, it would mar an essential image Trump has tried to create of himself — of a shrewd businessman who makes the best deals.

The song that seemed to snarkily play in the background at nearly every Trump rally in 2016 was the Rolling Stones' "You Can't Always Get What You Want." The White House seemed to make that its explicit sell to House members who have a problem with the bill.

Spicer chided that GOP members "took free votes" over eight years of the Obama presidency on repealing Obamacare. Now, he said, the party has to "keep our word."

He added, "At the end of the day, we can't make people vote."

But Trump and Ryan have set this bill up as the only vehicle to repeal and replace the Affordable Care Act.

If it doesn't pass, it endangers their entire agenda.