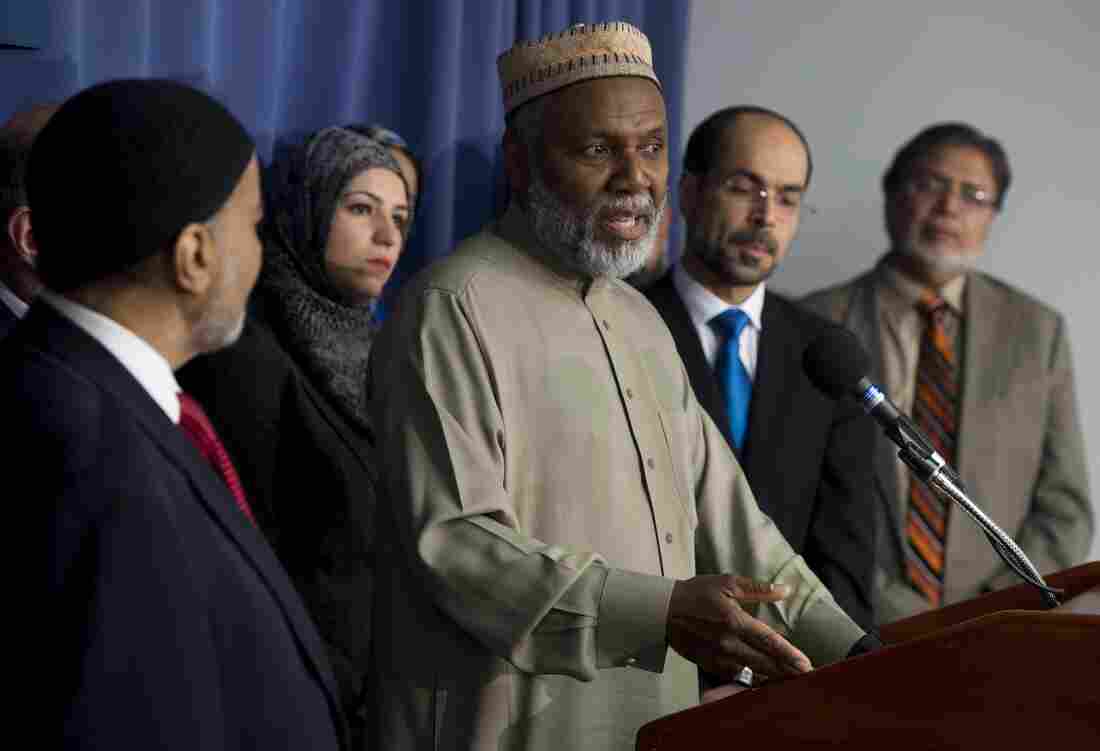 Imam Johari Abdul-Malik (center), of Dar Al-Hijrah Islamic Center in Northern Virginia, speaks alongside other leaders of the Muslim community during a December 2015 news conference in Washington, D.C., about growing "Islamophobia" in the United States. Saul Loeb/AFP/Getty Images hide caption 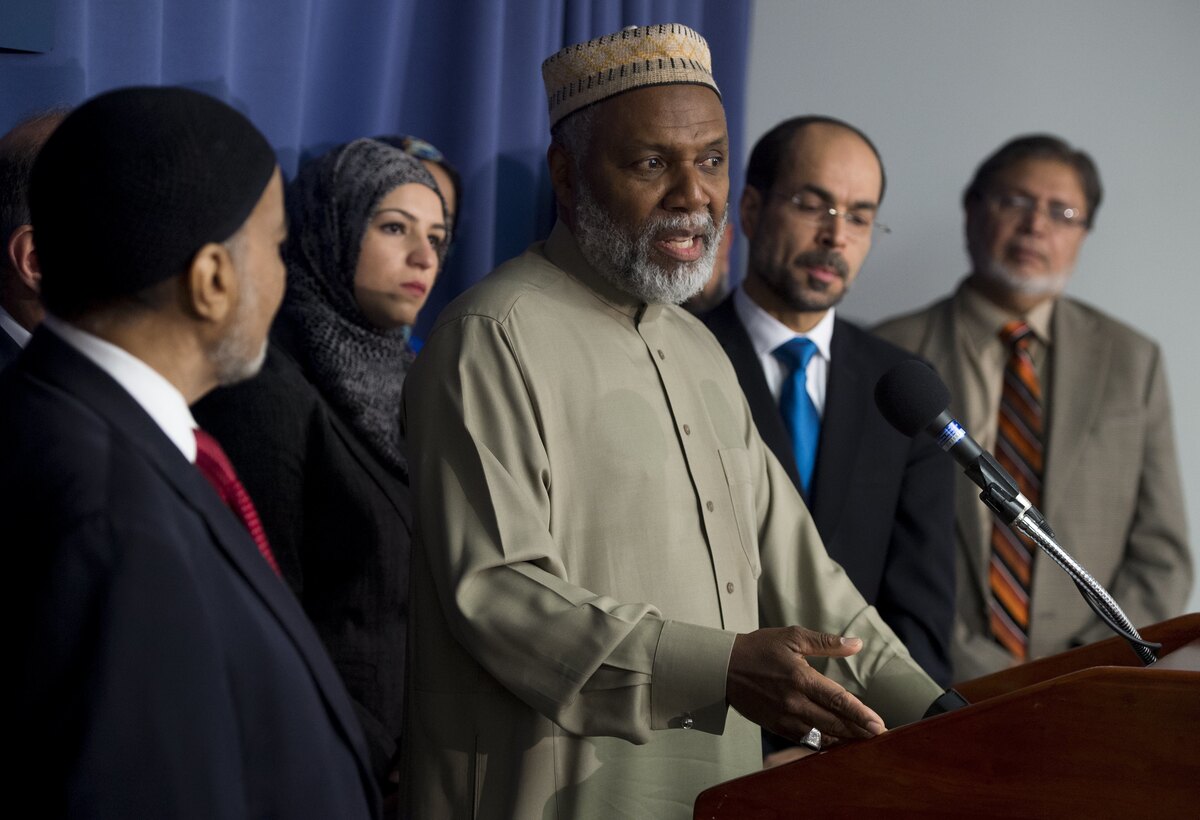 Imam Johari Abdul-Malik (center), of Dar Al-Hijrah Islamic Center in Northern Virginia, speaks alongside other leaders of the Muslim community during a December 2015 news conference in Washington, D.C., about growing "Islamophobia" in the United States.

The Muslim Brotherhood, the Islamist movement that has long held a disputed position in Middle Eastern politics, is now a focus of controversy in the United States.

Known in Arabic as the Ikhwan and founded nearly a century ago in Egypt, it advocates the application of Islamic principles in public life. The movement has so far pushed that agenda only in Muslim-majority countries, but some critics now claim — without evidence — that it is doing the same in the United States.

Harshly repressed by many governments in the region, the movement was popular among university students in the Middle East in the 1960s and 1970s — and when some of those activists immigrated to the United States with student visas, they brought their Muslim Brotherhood ideology with them.

"They were helped even by our State Department," says Hossein Goal, who emigrated from Iran during the period. "They gave them sanctuary to come here."

In the years that followed, members of the Muslim Brotherhood played significant roles in the establishment of mosques, Islamic schools and other organizations in the United States. At issue is whether their aim was to participate in American life or to advance an Islamist political agenda in the U.S.

Muslim Brotherhood, Mainstream In Many Countries, May Be Listed As Terrorist Group

His views are rejected by most scholars of Islam in America, but the allegation that many mainstream Muslim American organizations serve as Muslim Brotherhood "fronts" has gained a foothold in conservative circles. For several years, Sen. Ted Cruz, R-Texas, and other members of Congress have pushed to have the Muslim Brotherhood designated as a "foreign terrorist organization," and they hope to get a sympathetic hearing from the Trump administration.

The Muslim Brotherhood is officially committed to nonviolence; however, some brotherhood-affiliated groups, such as Hamas, have endorsed and used violence in pursuit of their goals.

Any designation of the group as a "terrorist organization" would have to come from the State Department. Muslim leaders and some civil rights groups say such a designation could expose Muslim American civic groups to harsh new scrutiny. Mosques, schools and Muslim charities that have received past support from the Muslim Brotherhood could face investigations.

Many of those groups were established with the support of Muslim Brotherhood activists who had immigrated as students. Having arrived in the United States still focused on the struggles of Muslims overseas from Kashmir to Palestine, the brotherhood members gradually turned their attention to the situation of Muslims in America.

"When they realized they weren't going home, they built new entities in America that would incorporate those values that they had, and also lobby to make sure America continued to be the ally of Muslims in Africa, Asia and the Middle East," says Johari Abdul-Malik, who was born in the United States but met many of the Muslim immigrants during his own college days.

The young immigrants, spurred in part by Muslim Brotherhood activists, raised money overseas for the construction of mosques, schools and other Islamic institutions in the United States, with the hope that Muslims arriving in the country would remain faithful to Islam and have places to congregate and worship. Another goal was to organize the Muslim immigrants politically.

"As fellow Muslims, we worked together to establish institutions that would help our community," recalls Goal, "to teach them about democracy, how democracy worked, and how to be engaged in civic work."

One institution established during those years, the Muslim American Society, openly acknowledges its ties to the Muslim Brotherhood in a statement on its website. "Many immigrant organizations would likely have had some founders who had some involvement or even membership in the Ikhwan," the statement says.

The brotherhood's role in Muslim American life became more controversial, however, with the rise of militant Islamist movements overseas. An investigation into one Muslim charity with alleged Muslim Brotherhood links, the Holy Land Foundation, resulted in five employees of the shuttered foundation being convicted of having funneled money to Hamas, the Palestinian group whose military wing is considered a terrorist organization.

The memorandum did not come to light until 2007, during the Holy Land Foundation trial. The president of the Muslim American Society at the time, Esam Omeish, disavowed the memorandum in an email to his board members.

"While some of these ideas were part of the debate that preceded MAS," Omeish wrote, "what MAS emerged with was a new framework and an intellectual paradigm that negates some of these advocated positions and ideas. MAS clearly and genuinely does not offer its Islamic program as an alternative to Western Civilization, nor is it bent on training its members 'to eliminate and destroy Western Civilization.' "

The author of the memorandum no longer lives in the United States, but the document regularly is cited as an indication of the Muslim Brotherhood agenda.

Abdul-Malik, who now serves as an imam at the Dar Al-Hijrah mosque in Northern Virginia, says he has found longtime members of the mosque are reluctant to talk about their early days as immigrants in the United States.

The secretive nature of the Muslim Brotherhood presents a challenge for scholars studying the group from the outside.

"I've been studying the brotherhood for 15 years," says Lorenzo Vidino, who directs the Program on Extremism at George Washington University. "I maybe understand 10 percent of how it works."

Vidino nonetheless believes the Muslim Brotherhood organizations abroad at a minimum have retained financial ties to supporters in the United States — a conclusion he bases on documents uncovered during government investigations of U.S. individuals or institutions with ties to Islamist groups overseas.

"Interviews [and] internal documents show a financial network which is very, very substantial, and clearly linked to the brotherhood abroad," he says.

A common creation of immigrant communities

Whether there is any sinister significance to the Muslim Brotherhood's historic links to Muslim American institutions in the United States is far from clear, however.

"The American Muslim experience has been so organic," says Afeefa Syeed, a co-founder of the Al Fatih Academy in Reston, Va. — one of about 270 full-time Islamic schools in the United States. "It has been so connected to community that it's hard to say, 'This has been a very strategic, planned-out effort.' And I say that because I've been through so many of these institutions."

Syeed's parents were among the Muslim immigrants who came to the United States as students in the 1970s. She readily acknowledges that her parents' generation was determined to establish Muslim institutions here but notes there was nothing out of the ordinary in that effort.

"That process is parallel to every other group that's come here," she says. "The Catholics built their schools; they built their churches, their institutions. They created their organizations. The Jewish community did the same. I think we're following along the same natural progression."