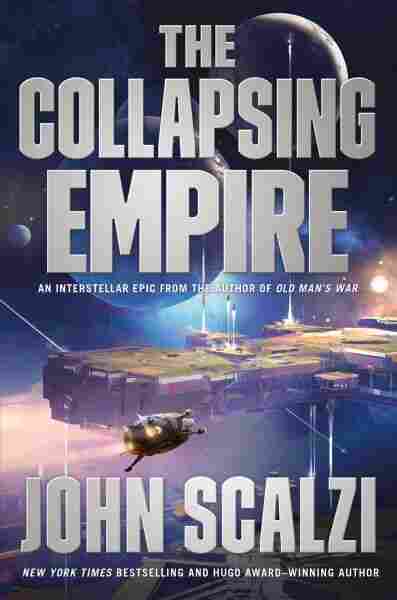 John Scalzi's novel The Collapsing Empire kicks off a new series set in — you guessed it — an interstellar empire teetering on the brink of collapse. The Interdependency sprawls across light-years of space, held together by a strange dimension called the Flow, which enables humans to span the immense distances between planets. But the Flow is failing, changing, fluctuating — cutting off some planets forever (including Earth). And in the Interdependency, no planet can survive without supplies from the others. So what's an emperox to do? (Yes, emperox — it's Scalzi's space-tacular gender-neutral term for the Interdependency's ruler.)

Scalzi is a prolific author, with dozens of novels, novellas and nonfiction works to his name — but he tells me an email interview that The Collapsing Empire kicks off an entirely new universe for him, with no links to his other work. "Nor any planned, since I'm not a comic book company doing crossovers of, say, Doctor Who and Star Trek," he says. "This isn't a complaint of crossovers, I should note: It's fun to cross Doctor Who and Star Trek (or whatever). But I like to keep my universes focused on what they're doing. There's certainly a fan impulse to tie everything together — fans of mine have tied together The Android's Dream, Fuzzy Nation and the Old Man's War universe — but canonically, they're separate and going to stay that way."

You've said that the book — and its title — aren't a reference to any kind of current events in the U.S., but as I read it I kept thinking there had to be some kind of historical parallel, some great empire that fell when its trade routes failed or its ports silted up. What was your inspiration?

... there was no one particular empire in our past I was borrowing from, but rather, a whole historical gestalt, and then only loosely. Please, historians, don't tell me all the things I'm getting wrong about the European age of exploration! I know. I KNOW.

In fact I did think very generally about the "golden age" of European exploration, roughly corresponding to the 15th through 17th centuries, in the sense that the empires that rose out of that era were wholly dependent on natural forces (wind, ocean currents, rivers) to move their ships and shape their destinies with regard to trade and exploration. We're so used to having at least some mechanical control of our travel that it's hard to put oneself back into a mindset where travel took months, not hours, and was not always a safe and predictable thing.

So there was no one particular empire in our past I was borrowing from, but rather, a whole historical gestalt, and then only loosely. Please, historians, don't tell me all the things I'm getting wrong about the European age of exploration! I know. I KNOW.

You've described Kiva Lagos, one of protagonists, as your favorite character you've ever written. Care to elaborate? (I mean, apart from the swearing, which is pretty great. Personally, I like her because she acts in ways that would be unremarkable, even admirable for a dude in our world – and are unremarkable and admirable for Kiva in her world.)

I like Kiva because she is an entirely "Give no f----s" sort of person, who comes from a long line of such people, and who basically feels entirely comfortable being that person without apology. This made her a whole lot of fun to write, but also, it made her an interesting character to write.

Kiva is someone who is in a position of not necessarily having to have a moral structure to her world, because she's rich and a noble and of significant influence. She could very very easily become a monster. Writing her so she is true to her fundamental nature but also feasibly not a monster was the challenge, and one of the reasons she's one of my all-time favorites.

How has knowing this will be a series rather than a stand-alone influenced the way you wrote it?

It meant I was comfortable ending the book on a bit of a cliff-hanger because I knew the next book in the series would be on its way relatively soon (it's scheduled for 2019, in point of fact), so people wouldn't have to wait too long to find out what happens next. But even with that built in, I still wanted to make sure the book was enjoyable for itself — if you only read this book, you'd still get a full and complete narrative arc and enjoy the adventures of the characters. I don't want to make people wait to have fun reading the books.