Accessibility links
Trump Warns In 'Art Of The Deal': 'Deliver The Goods' Or Lose In A 'Landslide' President Trump co-wrote the book on making a deal in 1987. But the former businessman couldn't deliver on overhauling health care.

Trump Warns In 'Art Of The Deal': 'Deliver The Goods' Or Lose In A 'Landslide'

Trump Warns In 'Art Of The Deal': 'Deliver The Goods' Or Lose In A 'Landslide' 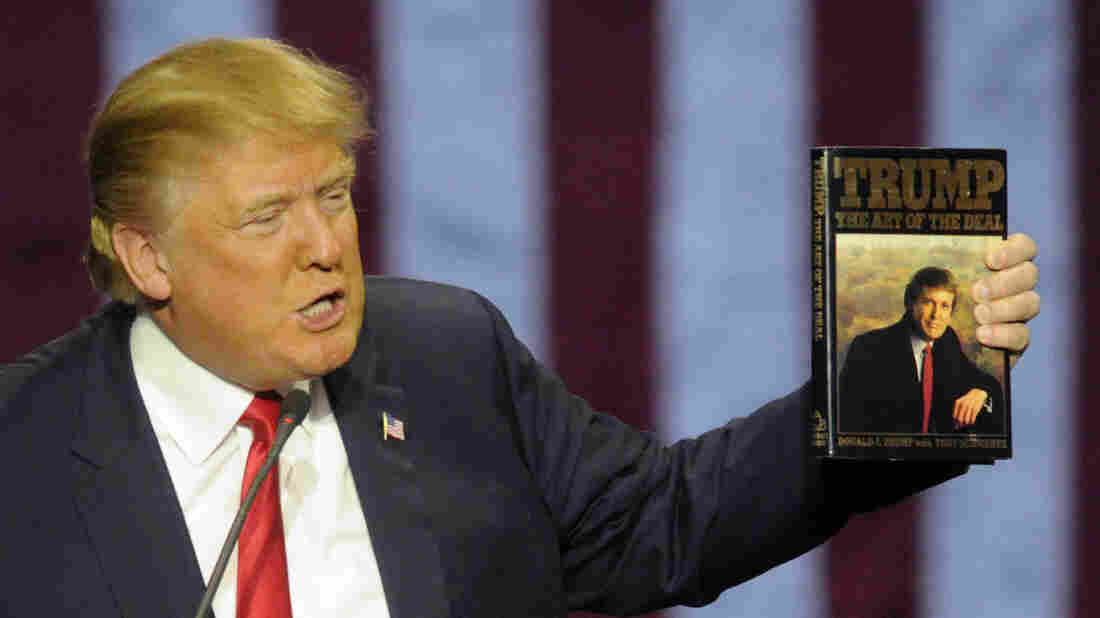 Donald Trump holds up his book The Art of the Deal at a campaign stop in November 2015 in Birmingham, Ala. Eric Schultz/AP hide caption 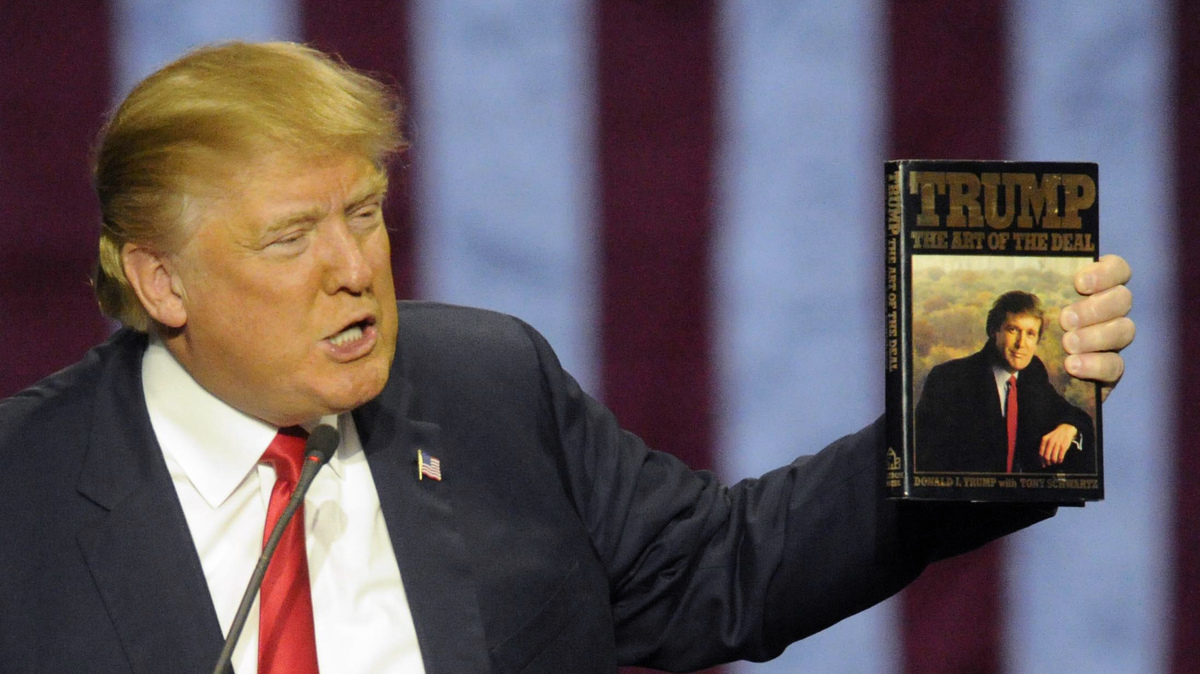 Donald Trump holds up his book The Art of the Deal at a campaign stop in November 2015 in Birmingham, Ala.

The negotiator-in-chief couldn't seal the deal.

President Trump, the former businessman who has never been shy about touting his negotiating skills, has for several weeks been involved in a high-profile negotiation and persuasion effort with members of his own party in an effort to pass the American Health Care Act.

But this is how Trump sold himself.

"All those politicians in Washington, and not one good negotiator," he bemoaned in August 2011. It was the day after then-President Obama and congressional Republicans struck a deal over raising the debt ceiling in a high-stakes negotiation.

A year and a half later, he offered, "If the Republicans need a chief negotiator I am always available."

In his 1987 book, Trump: The Art of The Deal, the president and his co-author Tony Schwartz wrote about how Trump approaches negotiations. In Chapter 2, Trump describes "The Elements of the Deal," with sections like "Think Big," "Enhance Your Location" and "Contain the Costs."

Here are a few excerpts that seem newly relevant in light of the health care bill's failure:

"You can't con people, at least not for long. You can create excitement, you can do wonderful promotion and get all kinds of press, and you can throw in a little hyperbole. But if you don't deliver the goods, people will eventually catch on ... I'd never understood how Jimmy Carter became president. The answer is that as poorly qualified as he was for the job, Jimmy Carter had the nerve, the guts, the balls, to ask for something extraordinary. That ability above all helped him get elected president. But, then, of course, the American people caught on pretty quickly that Carter couldn't do the job, and he lost in a landslide when he ran for reelection."

This is what you might call a cautionary tale. Trump is only two months into his presidency. He has time to start delivering the goods. But at the moment, many of his biggest promises remain unfulfilled or stalled. He promised to repeal and replace the Affordable Care Act way back in 2011, when he was contemplating a run for president, and he promised it throughout his successful 2016 campaign. Now it remains the "law of the land," as House Speaker Paul Ryan put it on Friday.

Trump says he plans to move on to tax reform — something people on both sides of the aisle say will be an incredibly heavy lift. It's been 30 years since Congress last found consensus to rewrite the tax code, and there have been numerous failed attempts since.

"I also protect myself by being flexible. I never get too attached to one deal or one approach."

Trump is known to be ideologically flexible. Some have argued it is an asset. In the case of the health care bill, it may have been a liability. His decision to move in the direction of conservative House Freedom Caucus members made the bill unpalatable for moderate Republicans, and even for some not-so-moderate representatives.

"I'm a great believer in asking everyone for an opinion before I make a decision. It's a natural reflex."

House Republicans praised Trump for listening to their concerns. Even as recently as early this week, representatives left meetings with Trump saying he had heard them out. But listening is not the same thing as closing a deal.

"Protect the Downside and the Upside Will Take Care of Itself"

Maybe that's what Trump was doing on Jan. 4 as congressional Republicans gathered to discuss their agenda for the year ahead. Vice President-elect Mike Pence was in the room giving House Republicans a pep talk, while Trump sent out three tweets warning Republicans to "be careful" with health care. This was before Trump took the oath of office and before the American Health Care Act was even introduced.

Trump has spent almost as much time talking about the idea of letting Obamacare fail as promoting the legislation, potentially sending mixed messages to congressional Republicans, whose jobs could be on the line and whose constituents would be personally affected by the changes.

"The chaos that Obamacare has created and for which congressional Democrats — and you see that — are alone responsible for requires swift action," Trump said in a Feb. 27 meeting with health care executives at the White House. "I actually told the Republicans that if we did nothing, just did nothing for a two-year period, let Obamacare totally implode — which it's doing right now anyway — that would be from a political standpoint the best thing we could do."

Why Eliminating Government Agencies Is A Lot Easier Said Than Done

He repeated that talking point again in brief remarks in the Oval Office on Friday, after deciding to pull the bill.

At times it has seemed as though the president wasn't completely invested in the legislation, even as he said he was 100 percent behind the bill.

"The worst thing you can possibly to in a deal is seem desperate to make it. ... In other words, you have to convince the other guy it's in his interest to make a deal."

Thursday night, Trump sent a message to members of his own party that he was done negotiating. Budget Director Mick Mulvaney told lawmakers that the president wanted a vote and would move on, leaving the Affordable Care Act in place if it failed. He argued their failure to vote would be a political disaster after they had spent years campaigning on the message of repealing and replacing the law. Trump was essentially walking away from the table and arguing that passing the bill was more important to members of Congress than it was to him.

Donald Trump And Mike Pence, The Odd Couple In The White House

They called his bluff. As the day went on Friday, it became increasingly clear the bill would fail as lawmakers who previously had been undecided said they would vote no.

"Much as it pays to emphasize the positive, there are times when the only choice is confrontation. In most cases I'm very easy to get along with. I'm very good to people who are good to me. But when people treat me badly or unfairly or try to take advantage of me, my general attitude, all my life, has been to fight back very hard."

During the campaign, Trump described himself as a counter-puncher. Will he punch back at congressional Republicans who didn't support the health care bill? He was asked if he feels betrayed by members of the Freedom Caucus, who negotiated concessions from him before ultimately saying they still couldn't support the bill. "I'm not betrayed," Trump said. "They're friends of mine. I'm disappointed because we could've had it. So I'm disappointed. I'm a little surprised, I could tell you."