Accessibility links
Book Review: 'Girl In Disguise,' By Greer Macallister Little is known about the real life of Kate Warne, the first female detective in America — but Greer Macallister's romp of a novel paints her as a live wire, an ace in a dangerous man's world.

'Girl In Disguise' Is A Spunky Spy Saga

'Girl In Disguise' Is A Spunky Spy Saga 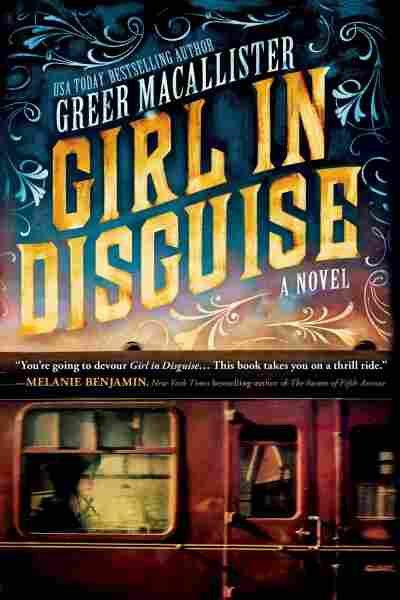 Pluck. Kate Warne, the heroine of Greer Macallister's detective romp, Girl in Disguise, personifies the attribute (I hear an echo here of Mr. Grant on The Mary Tyler Moore Show, informing Mary she has "spunk," before dropping the other shoe. "I hate spunk.") Warne was in real life the first woman hired by the famed Pinkerton National Detective Agency, back in 1856 — and in this historical novel, she sets herself immediately to solving the crime of what took them so long.

Well, no, not really. What Kate Warne does set herself to is fighting wrongdoers. Chicago on the verge of the Civil War is the backdrop for our heroine as she answers a newspaper ad placed by the Pinkerton Agency — whose agents are the extra-legal blade runners of choice for America's wealthy, its demimonde, and its government. Warne proves herself while working a jewel theft, but must keep proving herself, over and over, to the bearded, middle-aged Allan Pinkerton and his gaudy cast of operatives.

Girl in Disguise, Macallister's sophomore effort, dives into case after case, convincing the reader as well as Pinkerton that Kate is an ace detective in this dangerous man's world. Kate gets better as she goes — and so does the book. Some of the most successful agents in the war were women, but while most of them were on the Confederate side, Kate is Union to the bone. In a silk gown, gloves and bonnet, she insinuates herself into situations where her male colleagues would fear to tread, in search of secessionist troublemakers and other bad actors.

Pinkerton eventually makes Kate the head of a new woman's bureau, and she is as demanding of her new agents as she is of herself — but we don't know much about the historical Kate's life outside the agency. Macallister writes in an author's note that history has left us mostly "blank spaces" for this pioneering criminologist. Such a situation can actually become a gift to a talented author, who knows how to fill in those spaces with deft imaginings, like Kate's con artist, thespian parents, who unknowingly provided the perfect childhood for a would-be spy.

Macallister's Kate comes from hard knocks, lost one big love and had a terrible husband. She's a single woman trying to make it in the big city, a Mary Tyler Moore of times gone by.

"We were all misrepresenting ourselves to each other after all," she says at one point. "To live in this world daily was to traffic in the business of leading people astray. Thanks to my upbringing, I'd had more experiences with that than most."

Back in the realm of recorded history, Girl in Disguise gives us the true story of Abraham Lincoln, still president-elect, whisked into Washington disguised as a frail invalid in order to dodge an assassination plot. Macallister places her fictional heroine firmly at the controls of what was, in real life, a harrowing and finally risible operation by the Pinkertons (Lincoln's disguise of a tartan shawl and a mobcap came in for widespread mockery in the wake of the incident). But here it is a wondrous victory, with Kate playing the incognito Abe's "sister," pushing his wheelchair. "He asks after you every time we speak," Pinkerton tells Kate. He "says you're the very best agent we have."

Kate's love interest, another agent, embodies the Darcy principle: If a man is impossibly handsome and flinty at the beginning of the tale, a change is gonna come before the end. "He was a striking man," Warne tells us in the first chapter of Girl In Disguise, "with blue eyes like ice under his thick black eyebrows, but there was something cruel about his face. Something cold. Something locked away." Who, I wonder, will unlock that something? Who wrote the book of love?

If there is a flaw in this froth, it might be that the heroine is just too perfect. Macallister's Kate comes from hard knocks, lost one big love and had a terrible husband. She's a single woman trying to make it in the big city, a Mary Tyler Moore of times gone by, managing to survive and even thrive, using her wits and her charm. She stars in a sockdolager of a tale — to invoke a popular term of praise from the time — or a romp-con, to torture the more modern vernacular. With Kate, Macallister gives us a glimpse into a 19th century cloak and dagger world we may not have known existed.