Accessibility links
To Put You At Ease With Creepy-Crawlies, Entomologists Face Your Fears Nancy Miorelli posts photos of insects on her face on social media in hopes that the images will help normalize insects.

To Put You At Ease With Creepy-Crawlies, Entomologists Face Your Fears

To Put You At Ease With Creepy-Crawlies, Entomologists Face Your Fears 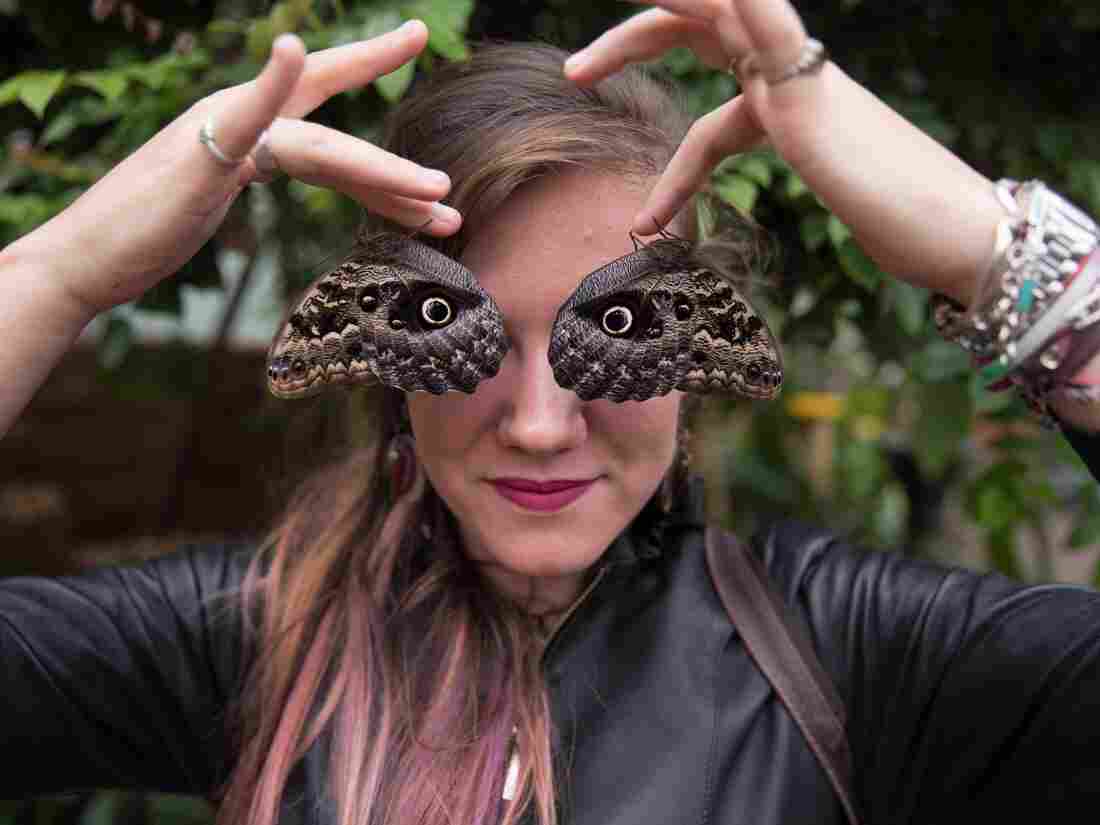 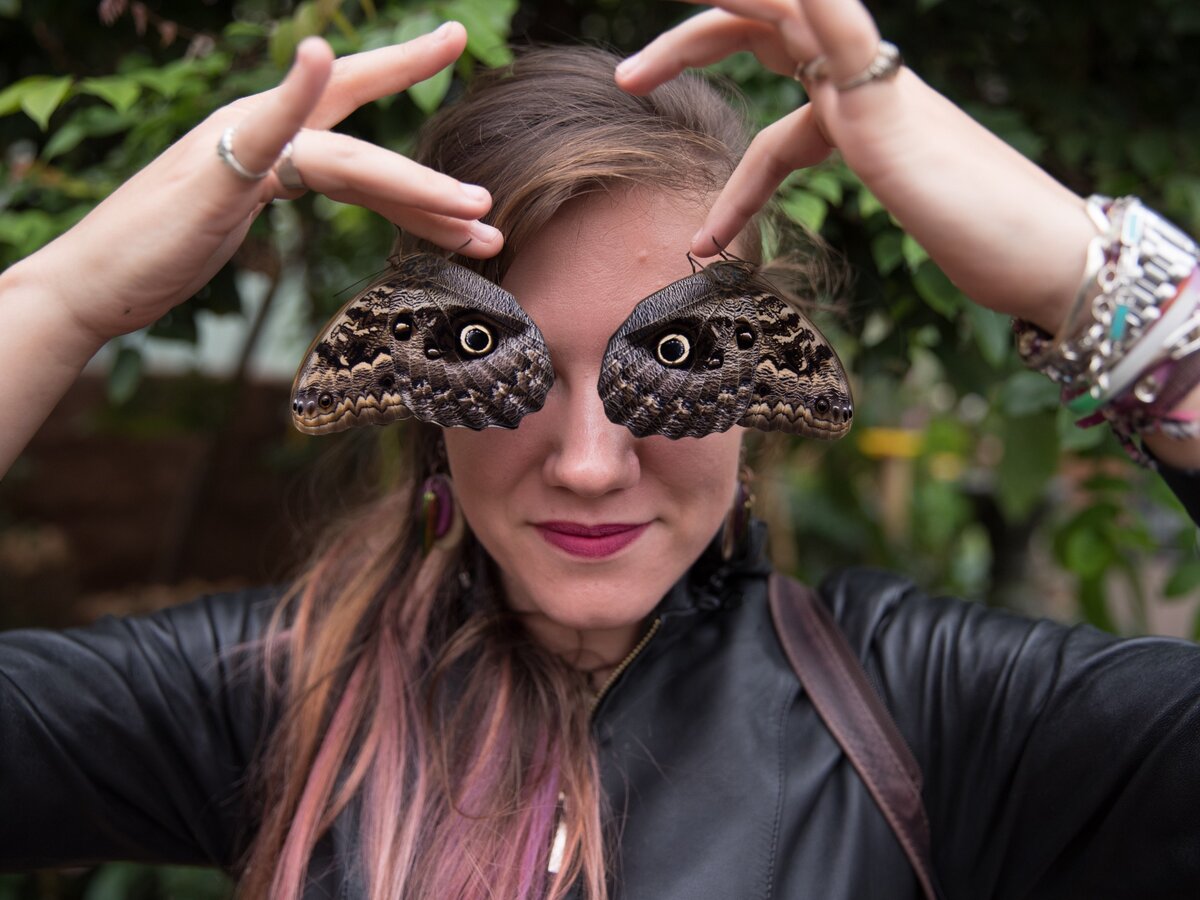 For a girl growing up on a one-lane dirt road in a Connecticut town, it seemed the only way to look was up.

But Nancy Miorelli was nearsighted, so although she spent most days outside until dinnertime, she couldn't see the birds flying above her head.

"So I guess that left things that were crawling on the ground," the 27-year-old entomologist says.

Yep, bugs. But poor eyesight isn't the reason she puts herself in what others might feel is nightmarish proximity to bugs these days.

No, Miorelli lets them rest on her face because she wants others to see them as she does: beautiful, diverse and necessary.

When she posted photos like these while curating @realscientists — a Twitter account that scientists from varying fields take turns hosting — the bugs on Miorelli's face drew an audience. The #facebug hashtag earned her a spot on Twitter Moments and other entomologists joined in, posting photos of butterflies, walking sticks and other insects resting atop foreheads and noses. Miorelli also added facts about the creatures in her tweets, such as their biology or conservation status. So she decided to keep going.

Thanks so much to everyone who got on board with #FaceBug
⚡️ “Meet the scientist who decorates her face with bugs”https://t.co/dwk6rHNmwu

Putting insects on your face helps give a sense of how big or little the bug is, Miorelli says.

"At a certain point, the bug is bigger than your hand, so it still doesn't really show the scale of how huge these insects are," she explains.

Phil Torres is a science reporter and photographer who has been snapping pictures of bugs on his face for at least five years.

"It's a way of just kind of breaking down this barrier," he says. "It's literally putting it right in your face and forcing people to come to a realization that OK, even though they don't want to admit it and they may be scared of looking at this thing, it's clearly not doing anything bad to me right now."

In places where he's worked, such as Ecuador, bugs on your face is often something that just happens.

"You're out in the middle of the jungle with very little Internet and not the normal amount of entertainment around you," he says. "So you start to just kind of create ways to have fun. Little mini challenges."

Last May, for example, Torres got eye to eyes with a tarantula. 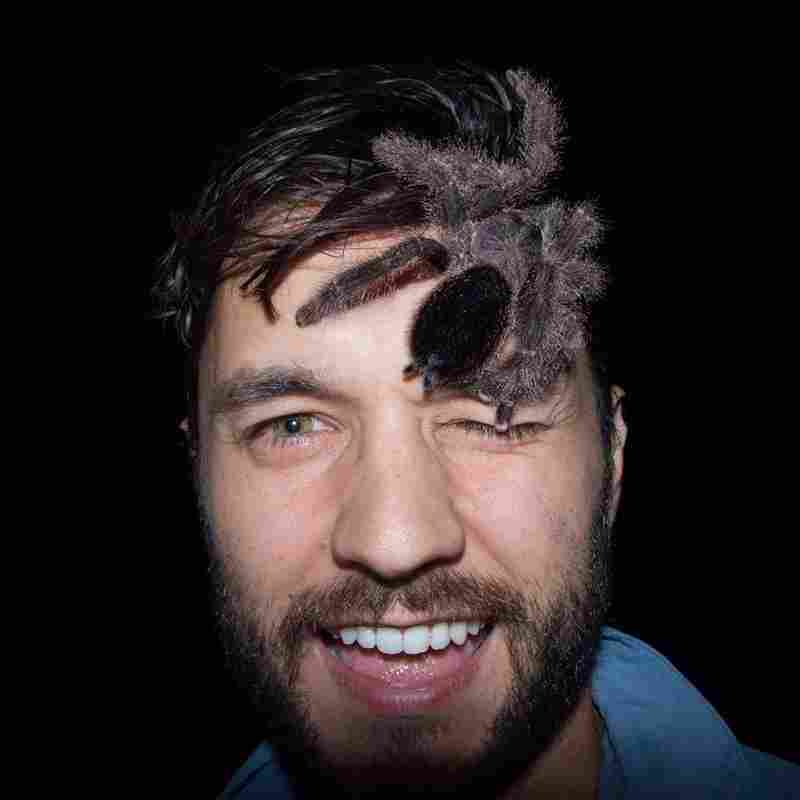 Phil Torres lets a tarantula from the Yasuni National Park in Ecuador rest on top of his head in May 2016. Courtesy of Phil Torres hide caption 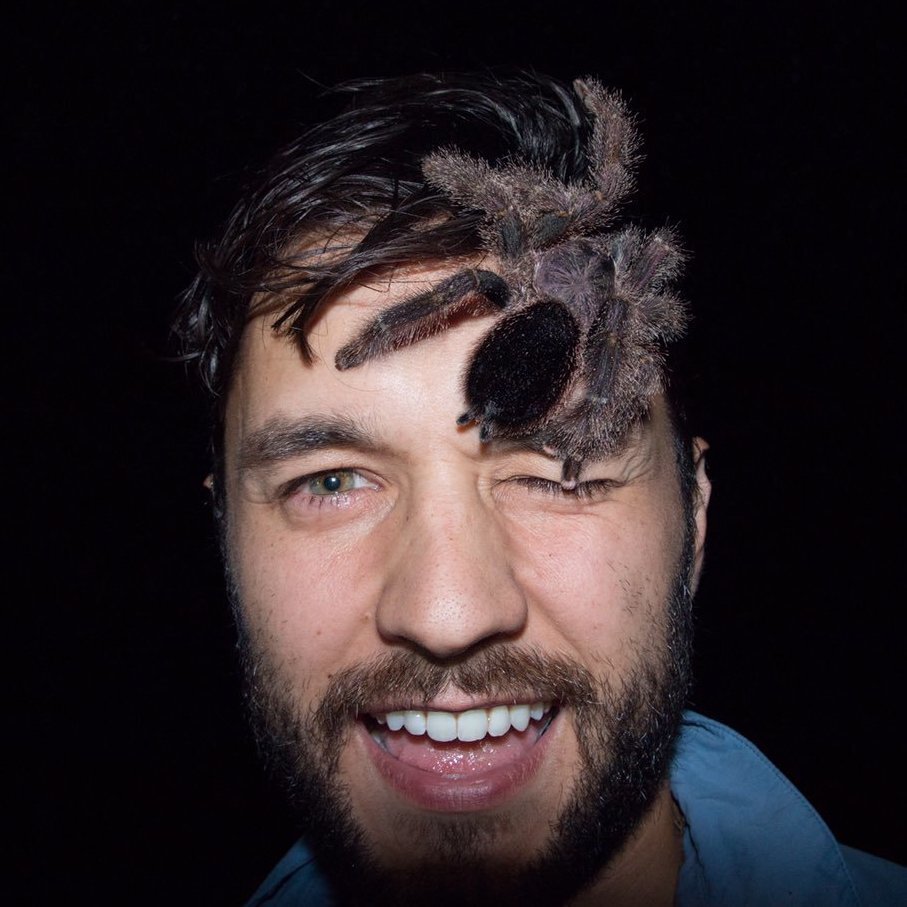 Phil Torres lets a tarantula from the Yasuni National Park in Ecuador rest on top of his head in May 2016.

He was on a night hike with others in the Yasuni National Park in Ecuador when he came across an extremely large spider. But after approaching it cautiously and attempting to coax it into a cage, Torres soon realized it was a calm, sweet animal.

So at 4 a.m., delirious and exhausted, Torres decided he would get the picture.

"We tried and kind of pushed it on there, and sure enough, the biggest spider I have ever seen in the wild was just a sweetheart," he says. "It was the nicest thing ever."

That's what Torres is hoping people will see when following #facebug. He says a lot of entomologists just want people to appreciate insects the way they do.

"There's more species of insects than every mammal, bird, fish combined," he explains. "There's so many of them and they do so many amazing things. So I think if you want to be day-to-day fascinated with nature, just think about insects. Watch insects. See the things they do."

When you find the most amazing walking stick insect ever, you gotta do a #facebug for comparison. https://t.co/9NrDkuKhka pic.twitter.com/9YuW9X5SLX

But some people can't, says Aaron Pomerantz, a Ph.D. student at the University of California, Berkeley, who is currently doing work with butterflies.

"Maybe less people now grow up with that kind of access to natural areas that have a lot of really cool insects and cool insect education," he says. "I think mostly we're just brought up with like bad experiences whenever we encounter insects for the most part."

But the more science communication there is, the more he sees people becoming interested in insects.

Joe Ballenger, who helps run the website Ask An Entomologist with Miorelli, says younger scientists have realized that communication is pretty much vital to their jobs.

"So this generation of scientists, the ones who are just coming out of graduate school, sort of realized that in order to grow their careers and make the impact that they want to make, you know, we really have to go out there and maintain good relationships with the public," he says.

But communication sometimes proves to be a more difficult task for entomologists.

"It's very different than somebody who's, say, studying pandas or cheetahs or stuff like that," Ballenger says. "We really have to act as advocates for the animals we study."

This is because a lot of people might have experiences about a certain insect early on that guides their thinking about insects as a whole, says Morgan Jackson, a Ph.D. student studying the taxonomy of flies at the University of Guelph.

"So there's like these big hills and mounds of respectively bad stuff that some insects do and that sometimes paints the whole group of insects — the million-and-a-half species that we currently know all get thrown into the same umbrella even though it's a very, very small percentage of them that really interact with us in any negative way," Jackson says. "So trying to overcome that can be tricky sometimes, trying to get people to see bugs as more than just the one that's biting them or may be living in their cupboard."

Culture too plays a large role in disliking insects.

"There's some groups of insects that are just fashionable to dislike," Ballenger says. "You know, like you're not going to get a lot of sympathy for cockroaches even though they're legitimately fascinating animals."

The morpho can reflect 80% light out of its wings! More efficient than our commercial LEDs using almost the same structure. #FaceBug pic.twitter.com/aymxbebUXh

And this is where #facebug can stick its antennae.

"If you see an insect, you don't necessarily know how big it is, so putting it on your head, you know, that provides a pretty good indication of the size," Ballenger says.

And he says one of the most common questions that comes up when people ask for an insect identification on his website is "will this hurt me?"

"And putting the insect on your face answers two of those questions at once," he says. "How big is this thing in real life, and will it hurt me?"

Torres hopes it makes people pause and "just take a moment to look at one of these species that they either normally walk right past or even walk over or even step on."

But to appreciate an insect, you don't have to be literally face-to-face with it.

Torres recommends people go to their yard, find a spider or beetle, and just start with a hello.