Accessibility links
Health Care Reform, Russia, Gorsuch: Week Of High Expectations Stumbles To New Lows For Team Trump Trump is known for his negotiating in real estate and show business, and the craft of the bluff was key to his Art of the Deal. But when this bluff was called, he did not have the cards or the votes. 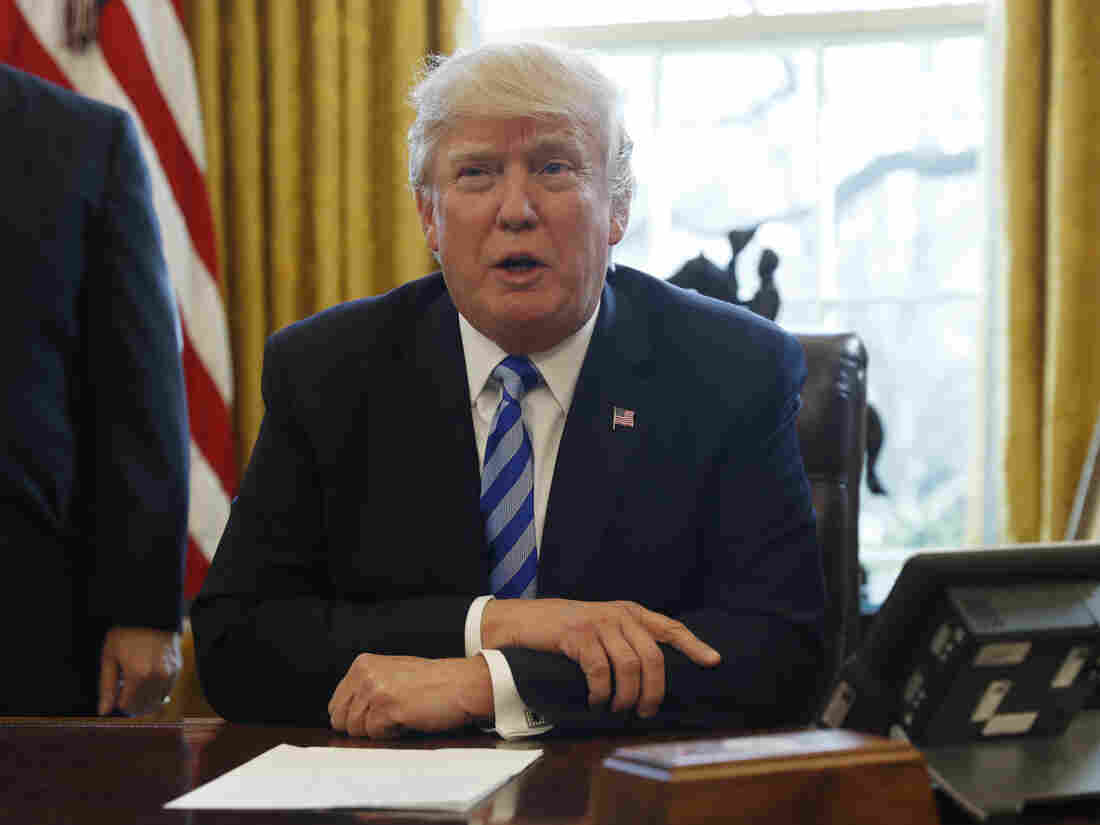 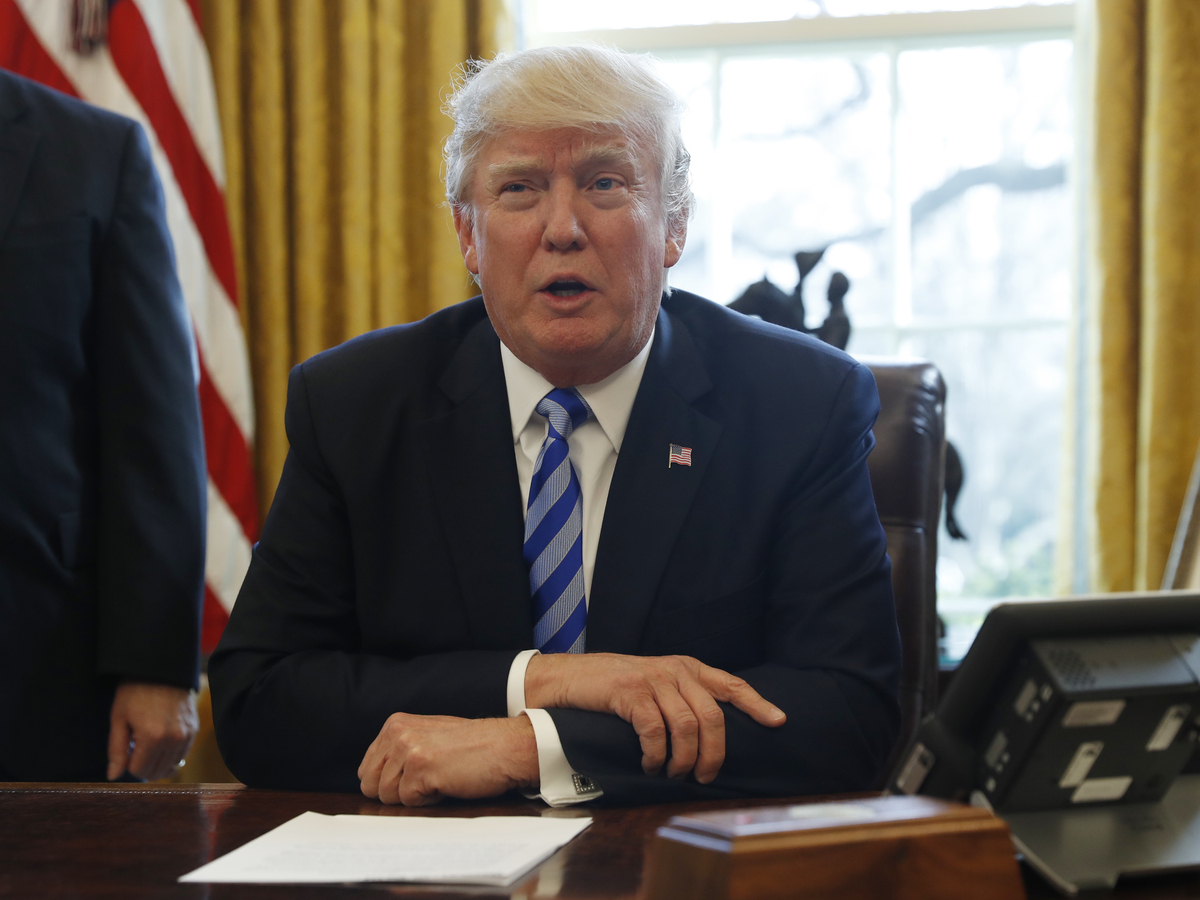 President Trump speaks to the media in the Oval Office on Friday.

This was to have been the week when President Trump turned his fledgling presidency around, setting a course for success and letting the wind fill its sails at last.

Instead, it became his worst week to date, ending with the ship becalmed and its crew in disarray. After other controversies had spoiled the weather, the Republicans proved unable to muster the votes to pass their repeal-and-replace Obamacare bill in the House. The president and Speaker Paul Ryan had to call off the vote scheduled on the floor — not once but twice.

The media world, waiting in rapt attention, exploded in amazement and derision — from all sides of the political kaleidoscope. The Drudge Report featured the historic photo of the dirigible Hindenburg bursting into flames. (The night before, the equally Trump-friendly New York Post had shown him in the cab of a truck, consumed with road rage and shouting "My way or the highway!"

It was astounding that the turnaround turned out to be the other way around. Just five days ago there had been talk of a trifecta of triumph. On Monday, the House Intelligence Committee was going to take the president's side on the issue of Russian interference in the 2016 campaign and Trump's accusations that his own operations were "wiretapped" by President Obama. By Thursday, the long-promised Obamacare repeal would be done in the House.

And, throughout the week the Senate Judiciary Committee would be throwing bouquets at Neil Gorsuch, Trump's widely praised pick for the U.S. Supreme Court. Gorsuch might still be able to join the eight current justices before the current term ends in June.

But matters went south rather quickly on Monday, when the first hour of the hearings in the House Intelligence Committee produced a blockbuster quite different from what the White House expected. FBI Director James Comey and the National Security Administration Director Mike Rogers told the committee they had zero evidence that anyone in the Obama administration tapped Trump. Moreover, they said there was an ongoing investigation, begun as far back as July, of Russian interference in the campaign that was intended to hurt Democratic nominee Hillary Clinton and help Trump.

The White House promptly sent out tweets indicating the Obama tapping allegation might still be proven and that the suggestion anyone from Trump's team had talked to any Russians had not and would not be proven. But that prompted widespread contradictions and media corrections.

Nor did it help that House Intelligence Chairman Devin Nunes went to the White House to brief the president on information indicating some Trump "associates" may have been inadvertently caught up in surveillance of certain foreign agents. Nunes wound up making news and appearing often in the media nearly every day of the week, keeping Monday's bad story alive and kicking.

The Russia story surely contributed to a downturn to the president's approval rating, which headed back down in the Gallup Poll and other closely watched national measures. No help, to be sure, in a week when Trump could have used a boost.

On Tuesday, even the Gorsuch hearings got uncomfortable. While Gorsuch himself evoked a folksy Western affability, the questions about his court decisions piled up. Why did he think it okay to fire a trucker who left his disabled rig in sub-zero temperatures? And why was the list of his decisions in favor of corporations so much longer than his history of siding with the little guy? On Thursday, Senate Minority Leader Charles Schumer of New York announced that he and other Democrats would filibuster the Gorsuch nomination.

The Gorsuch filibuster may be as much about the Republicans' refusal to process Obama nominee Merrick Garland last year as it is about Gorsuch. And it may simply be a move to force Majority Leader Mitch McConnell to invoke the "nuclear option" and confirm Gorsuch with a simple majority. But it also robbed the Gorsuch nomination of some of its luster, given the rarity of such tactics.

In truth, the Gorsuch hearings were still a relative bright spot. But they were also overshadowed, first by the Russia story and then by the collapse of the health care repeal. The stubborn resistance of the House's ultra-conservative Freedom Caucus forced Ryan and Trump to make several concessions that made their bill palpably less popular.

The key move was to strip the federal mandate on insurers to cover a basic list of 10 "essential health benefits," including maternity and prescription drugs and treatment for addictions. This news was meant to sew up the Freedom Caucus, but it did not quite succeed. It did effectively alienate several House moderates who were already worried about funding for states that expanded Medicaid under Obamacare.

The tricky calculus was elusive enough to force a postponement on Thursday, which had been chosen because it was the seventh anniversary of President Obama signing the Affordable Care Act into law. Knowing how much the symbolism meant to the leadership, the media could see something was seriously amiss.

A meeting of the whole Republican House majority was called behind closed doors. The president sent emissaries to the Capitol to insist the vote take place on Friday, hell or high water. If it failed, they said, the president would abandon the issue and work on tax reform.

Could the president be serious? Walk away from the issue the GOP had spent so much of the seven intervening years making its top priority? Leave Obamacare in place after voting to repeal it more than 50 times before? Leave it in place after saying it was collapsing?

Trump has prided himself on his success negotiating real estate deals and show business contracts, and the craft of the bluff was surely part of his Art of the Deal. But in this instance, his bluff was called. And he did not have the cards – or in this case, votes.

On Friday, at least two dozen House Republicans were still indicating they were not on board. And neither Ryan nor Trump wanted to lose a vote on the floor. Some of the rebels were from the party's far right, others from its most conventional middle. The chairman of the powerful Appropriations Committee, Rodney Frelinghuysen of New Jersey, broke with the leadership around midday. Other mainstreamers usually aligned with the speaker followed suit. The unraveling had begun.

Late on Friday, the president appeared in an Oval Office video with Vice President Pence and Tom Price, the former House member now heading the Department of Health and Human Services. In that video, Trump said Ryan had come close to winning and blamed the health care failure on the Democrats, "who weren't going to give us a single vote."

He said as a result the Democrats would now own the consequences as the ACA "exploded." If they did not want that, he said, they should come to him and negotiate and put together "a great plan for the whole country."

But other voices within the White House, speaking anonymously to a variety of reporters, were talking of the failure of Ryan to put together a bill that could cement a coalition, relying too much on the president to bring the bill home at the eleventh hour.

Indeed, other leaks from within the president's inner circle indicated he had been displeased by his son-in-law Jared Kushner's absence this week (he and presidential daughter Ivanka Trump were skiing with their children) and cast doubt on the performance of Chief of Staff Reince Priebus.

In other words, the week had done nothing to dispel the air of dissension within the West Wing. That was perhaps the least surprising development in a week that had fallen so far short of its high expectations.

A previous version of this story incorrectly stated that the historic image of the dirigible Hindenburg depicted it striking a radio tower. The tower in the picture is actually the dirigible's mooring mast.