Accessibility links
Emma Donoghue Helps Kids Deal With Dementia (And Still Has Fun) In 'The Lotterys' Emma Donoghue tackles a tough topic with light and humor in The Lotterys Plus One, her new kids' book about a boisterous blended family learning to accommodate a difficult grandfather with dementia. 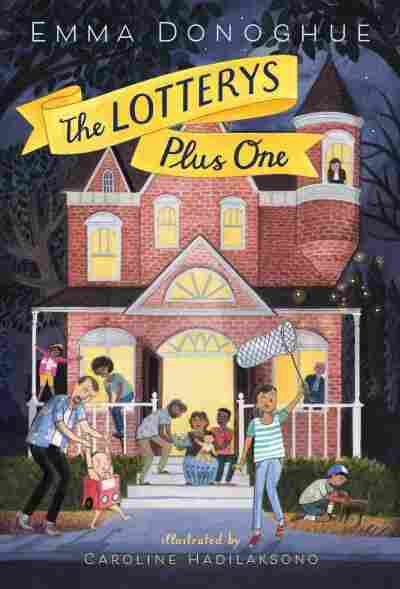 The Lotterys Plus One

Title
The Lotterys Plus One
Author
Emma Donoghue

Readers may remember Emma Donoghue for her blockbuster novel Room — the one about a happy little boy growing up in horrifying conditions: Born into captivity. Mom abducted.

Where Room was darkness pierced with light, Donoghue's latest — it's actually for young readers — is pretty much all light. Even the idea came out of fun, Donoghue says. "I don't usually make up my books during dinner parties, but this one came out of a conversation in a very raucous, noisy New Year's Eve dinner party," she remembers. "My hostess said to me, 'How come there aren't good books for middle grade that feature kids with two mothers? You know, write me one, Emma,' she said. And then I thought, while I'm at it, let's make it really big — you know, go big or go home."

So Donoghue dreamed up a big, boisterous, diverse family, one that starts with two sets of same sex couples deciding to have children: "Once upon a time, a man from Delhi and man from Yukon fell in love, and so did a woman from Jamaica and a Mohawk woman. The two couples became best friends and had a baby together. When they won the lottery, they gave up their jobs and found a big old house where their family could learn and grow ... and grow some more."

The book is called The Lotterys Plus One. The family, by the way, grows to include seven kids. And that "plus one" of the title turns out to be the addition that tips the family over the edge.

On Sumac, our guide to the family

I would say Sumac — and by the way, all the children are named after trees, because the parents are such hippies — Sumac is the one who sort of keeps them all up to the mark. You know, she organizes the family photos slide shows ... and I liked the idea of taking this good girl and plunking her down in a very chaotic household. She's surrounded by siblings behaving badly, and often parents ... so I liked the idea that the sensible, really naturally introverted one, would be sort of the ringmasters of all this chaos, perhaps.

In Donoghue's 'Room,' A Child's World Of His Own

'The Wonder' Is A Hard-To-Believe Tale Of Belief

On "Grumps," the grandfather who comes to live with the Lotterys after being diagnosed with dementia

Well, in a way, the novel is all about culture clash, and although Sumac is perfectly welcoming in general, it's hard for her to make room for this curmudgeonly old man who has never sought out his son's family, doesn't like his son being gay, even. So you know, he's critical of every aspect of the house ... he's really an antagonistic house guest to have, and of course he's wretchedly unhappy at suddenly being yanked away from his own independent life. So really, the novel tries to deal sympathetically with the fact that there's some right on all sides here.

On writing about dementia for young readers

This is one of the first things I decided about the book, because my own mum has been living with dementia for six years now, and she had just been diagnosed when I planned this book. And everything I read about dementia for children had a dreary tone to it, a sort of "let's stop the action and all give you sad facts," you know? So I don't believe there's any subject that can't be handled with a little bit of spark, so I try and make it very accurate, but also accept the humor that can be in misunderstandings, and let him be a real character, not a textbook — and above all, I avoided being too sad, in that the children didn't know this grandfather before, so they're forming a brand new relationship with this man. It's not about seeing a loving relationship ebb away.