Accessibility links
FACT CHECK: Trump Says Obamacare Is 'Exploding.' That's Not Quite True The Affordable Care Act, passed by Democrats during Obama's presidency, has its weaknesses, but the data show it's not at all "exploding." We have the facts behind what's going on. 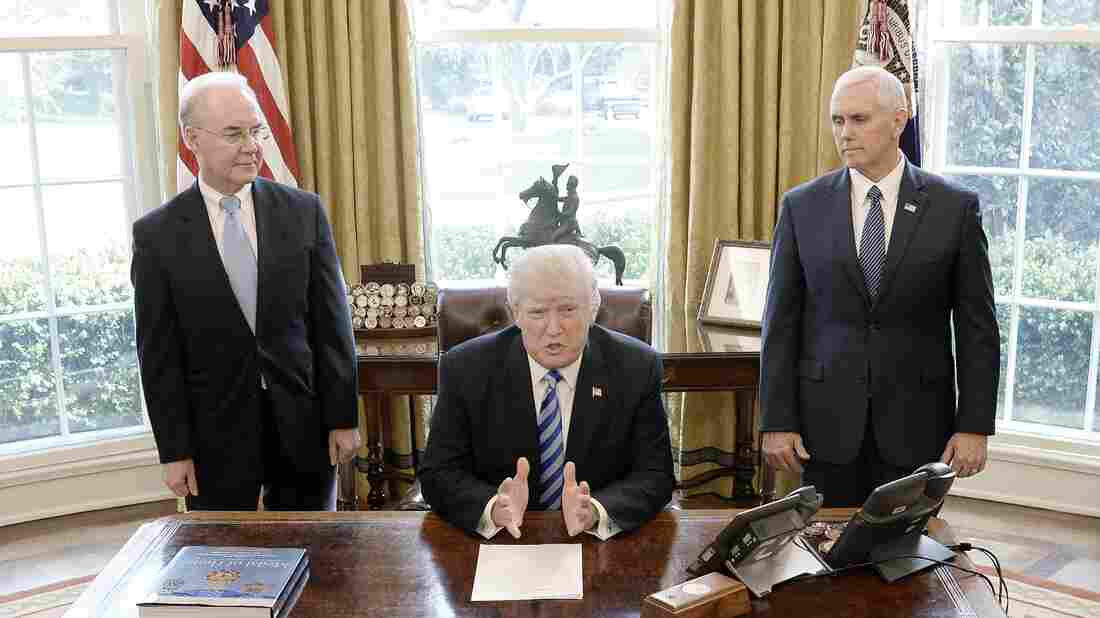 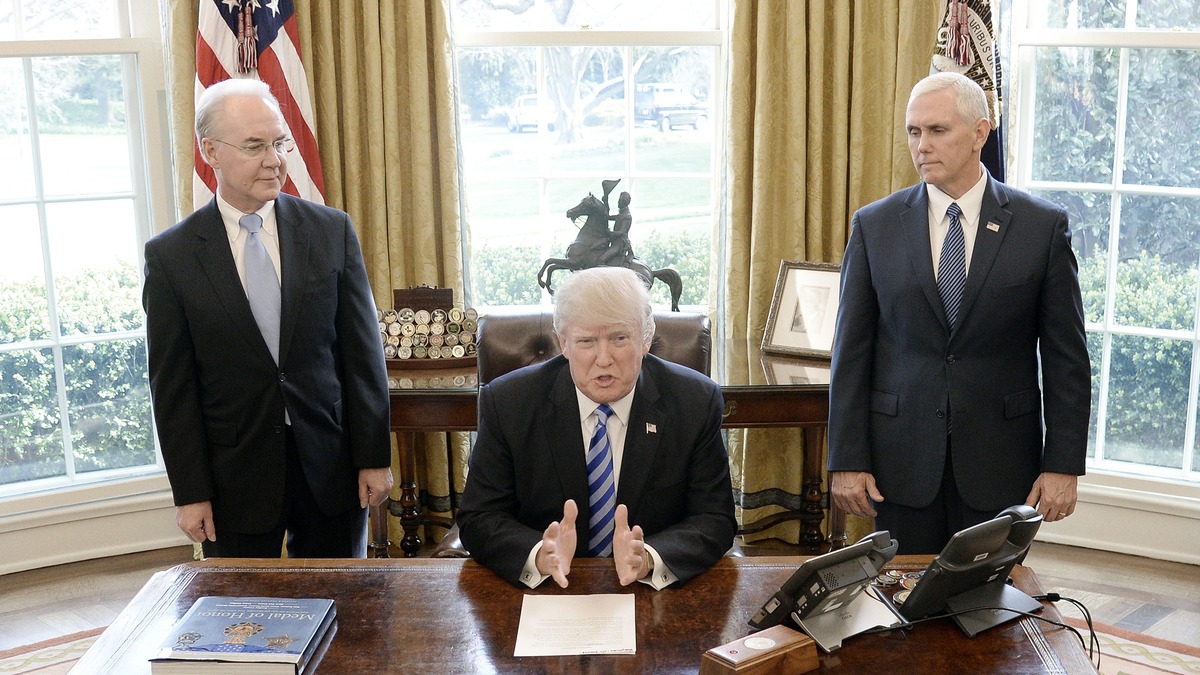 President Trump is doing his best to put a good face on defeat in his party's attempt to replace the Affordable Care Act, also known as Obamacare.

His strategy is simple: declare that the law is failing. And he is selling that message in his own distinctly Trumpian way: concocting it out of simple, bold words and then hammering that message home, over and over: Obamacare, in his words, will "explode."

"The best thing we can do, politically speaking, is let Obamacare explode," he said in the Oval Office on Friday after the GOP health care bill went down. "It's exploding right now."

Again on Twitter on Saturday, he repeated his case: "ObamaCare will explode and we will all get together and piece together a great healthcare plan for THE PEOPLE. Do not worry!"

The law has its problems — but it is far from "exploding," using any reasonable definition of the word. Here is a quick rundown of where the Affordable Care Act stands right now, what's going well and what's not so great.

Supporters of the current health law received something of a boost last week with the Congressional Budget Office's initial assessment of the Republicans' bill. If the Affordable Care Act were kept in place, the CBO wrote, the exchanges wouldn't explode at all.

U.S. Ethics Official To White House: No, These Rules Definitely Apply To You

"The nongroup market would probably be stable in most areas under either current law or the [Republican] legislation," the nonpartisan office wrote.

First, it said the law requiring people to buy insurance or pay a penalty works to bring people into the market, further stabilizing the customer base.

2) ... In part because many people are shielded from premium hikes.

Indeed, premiums have climbed substantially in some states' exchanges, but PolitiFact found this week that "most people purchasing health care through the marketplace didn't feel it." (The fact-check organization was vetting former President Obama's claim that most exchange enrollees "have experienced no average premium hike at all.")

A study by the Kaiser Family Foundation shows that a 40-year-old who makes $30,000 could have paid the same $208 a month for an average marketplace health insurance policy in both 2016 and 2017, as long as they were willing to shop for the best price.

3) The uninsured rate has fallen — a lot.

Probably the biggest positive supporters of the Affordable Care Act point to is the fast-falling rate of people who don't have health insurance. Before the ACA, more than 16 percent of the population was uninsured. Then in 2013, the first year that the Obamacare marketplaces went live, the uninsured rate fell to 13.3 percent, and then to 10.5 percent in 2015, and to 8.9 percent in the first half of 2016, the lowest ever.

Much of that decline is because many low-income people became eligible for Medicaid under the Obamacare expansion of that program. The rest are people who bought insurance through those exchanges.

That has had knock-on effects throughout the health care industry. Most notably, hospitals are losing less money, because they don't have to treat as many people in emergency rooms who don't pay their bills. The American Hospital Association says that uncompensated care dropped from 6.1 percent of their expenses in 2012 to 4.2 percent in 2015.

4) Premiums are holding steady (but don't praise Obamacare for that)

One more point that's not exactly great, but is an improvement: Premiums continue to grow for enrollees in employer-provided plans, but that growth is slower than it was in the years prior to the Affordable Care Act's passage.

However, the law doesn't appear to have played a big part in slowing that growth.

The Kaiser Family Foundation's Gary Claxton told FactCheck.org recently that it's difficult to figure out exactly how much Obamacare affected employer premiums — there are "so many moving parts," he said — but he doesn't believe there's much of an effect.

"There was nothing fundamentally large about the ACA overall which had a noticeable effect" on those premiums, he said. Fredric Blavin, a senior research associate at the Urban Institute, likewise told FactCheck that any effects on premiums were likely small.

For example, the Kaiser Family Foundation found in 2013 that a slowing economy probably had something to do with the slowing growth, as FactCheck.org noted. Not only that, but deductibles have grown quickly in recent years, helping to keep premiums down. Ultimately, Obama's health law doesn't seem to have held premiums down all that much — but it also hasn't caused them to explode.

1) Few insurance options for many Americans.

The Affordable Care Act does have its weaknesses. As more companies have pulled out of the exchanges, Americans are left with fewer choices in their coverage. In many parts of the country, as Trump and his fellow Republicans often point out, enrollees in the insurance exchanges have only one choice of insurer.

An analysis by the Kaiser Family Foundation found that five states — Alabama, Alaska, Oklahoma, South Carolina and Wyoming — have only one insurance company selling policies on the Obamacare exchanges.

And the share of the population that has three or more companies to choose from fell from 85 percent in 2016 to 57 percent this year.

The uncertainty over the future of the Affordable Care Act exchanges has likely made this situation worse. Insurers have to decide in the next few weeks whether to offer policies on the federal and state exchanges for 2018. Humana has already announced it intends to leave the exchanges altogether.

2) Big premium hikes for some Americans.

And while it's true that many Americans in the exchanges — 64 percent, according to PolitiFact — haven't seen their out-of-pocket spending on premiums rise, around one-third did. Those premium hikes were steep in some states, such as Arizona, which saw its average premiums more than double. And for those who were shielded from rising premiums by subsidies, the government picked up that much more of the bill.

And premiums aren't the extent of health care spending. For most people, out-of-pocket costs such as deductibles and co-payments have also risen. The average deductible for workers getting individual insurance through their employers was $1,478 last year. That's up by 49 percent over five years. That helps counterbalance the slower growth in premiums.

One more sign of problems with U.S. health care today: The U.S. spends much more on health care than other countries do — more than $9,400 per capita per year, as of 2016, compared to around $3,800 for other developed countries.

That's not caused by the Affordable Care Act — this was a problem before the bill was passed — but it's a sign that there's still a lot that could be done to improve the U.S. health care system.