Accessibility links
Trump's Agenda May Be Doomed Unless He Learns That 'Little' Stuff Matters The president showed little interest in policy details. If he continues to focus superficially on getting a win instead of learning, Republicans warn that his priorities will continue to be derailed. 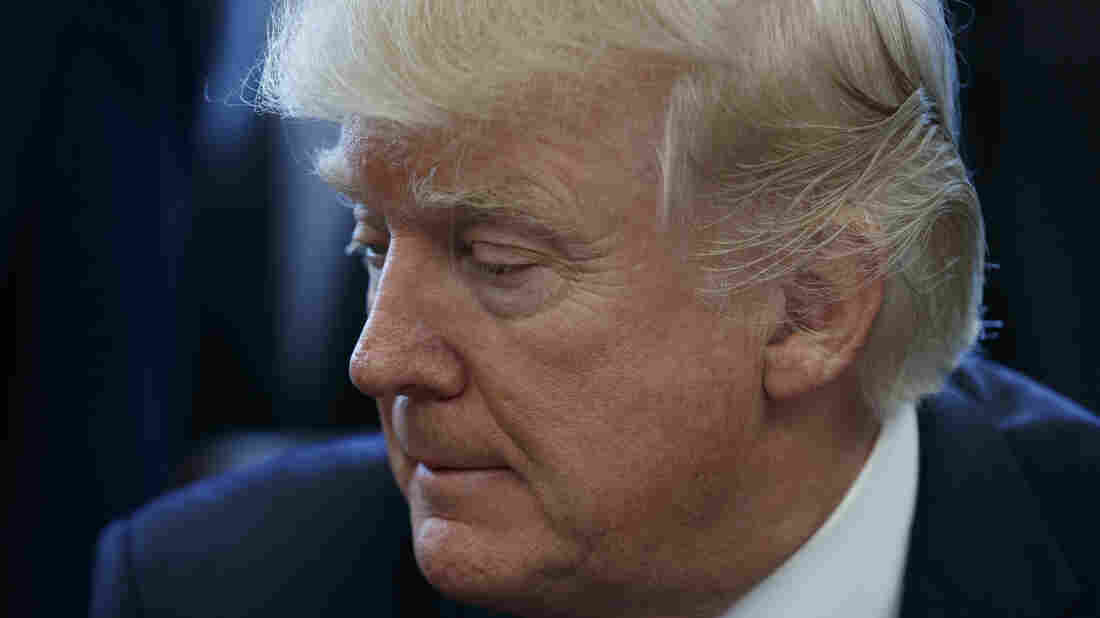 President Trump suffered a major defeat when the GOP health care legislation failed to be brought for a vote in the House on Friday. What transpired endangers all of Trump's agenda moving forward. Evan Vucci/AP hide caption 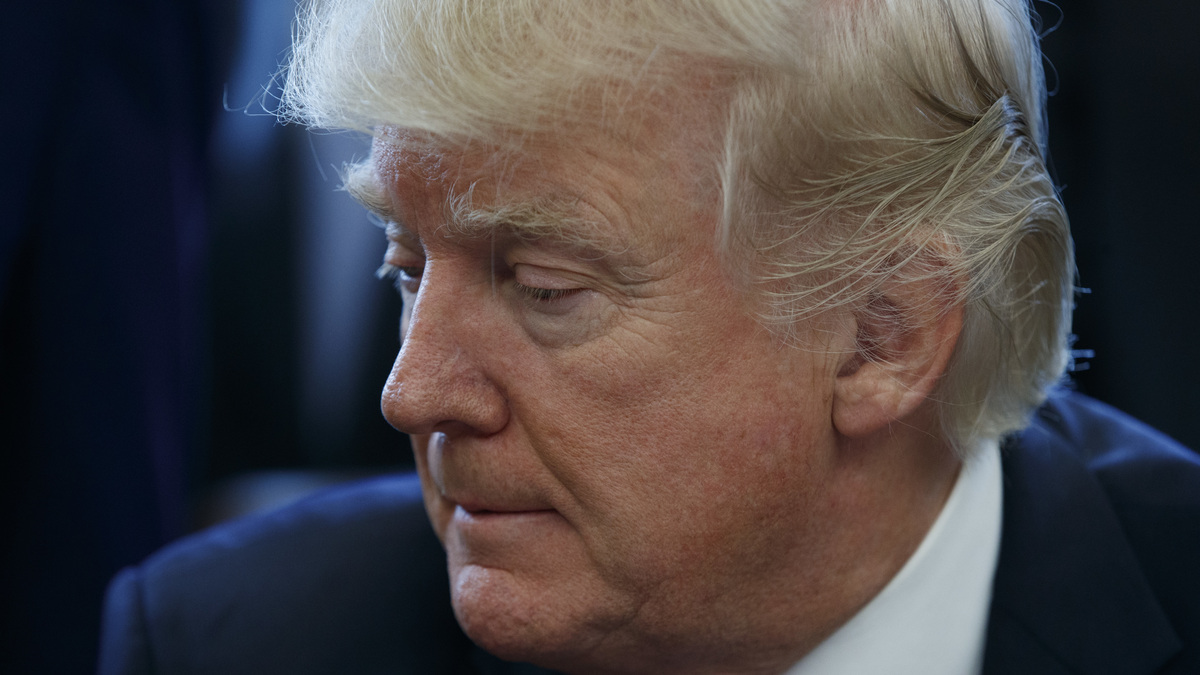 President Trump suffered a major defeat when the GOP health care legislation failed to be brought for a vote in the House on Friday. What transpired endangers all of Trump's agenda moving forward.

The look on his face, as he meandered through unscripted remarks Friday after the defeat of the Republican health care plan he supported, told the story. The unusually subdued Trump called the loss a "learning experience." Then he seemed to shrug it all off and said he was moving on.

But it's hardly going to be that simple or easy. The same fissures in the GOP that derailed the health care bill will be there when it comes to any big issue moving forward, whether it's tax reform, infrastructure or funding the government. And Republicans warn that, unless the president is willing to learn and own the details, the result will likely be the same — failure.

"Trump's defeat this week was entirely predictable," said Alex Conant, who worked on Marco Rubio's presidential campaign and was a spokesman for the Republican National Committee and the Bush White House. "He has never showed any detailed knowledge of health care policy and has few relationships in Congress. Getting health care passed was always going to be a heavy lift, but Republicans should be concerned that Trump couldn't even get it off the ground."

During the campaign, Trump connected with a significant chunk of the country with big, bold promises. But on arguably his (and the GOP's) highest-profile promise — repealing and replacing Obamacare — he flamed out in one of the most embarrassing ways possible just 64 days into his presidency. It's unlikely that Republican voters will be satisfied with leaving Obamacare in place.

"It failed brilliantly," said another Republican strategist, who requested anonymity to speak frankly about a president the strategist may be working with on upcoming priorities. "Going forward, I would expect there would be a greater ownership on the White House's part on the legislation that is being advanced, and he's going to have to be in a position to know the details."

No one looks good

No one comes off looking good in the debacle — not House Speaker Paul Ryan, who was the brains behind the bill and led the legislative strategy; not White House Chief of Staff Reince Priebus, who is close to Ryan; not White House chief strategist Steve Bannon, who reportedly tried to play hardball with the roughly 40 hard-line conservatives of the House Freedom Caucus, who were largely responsible for the bill's defeat. 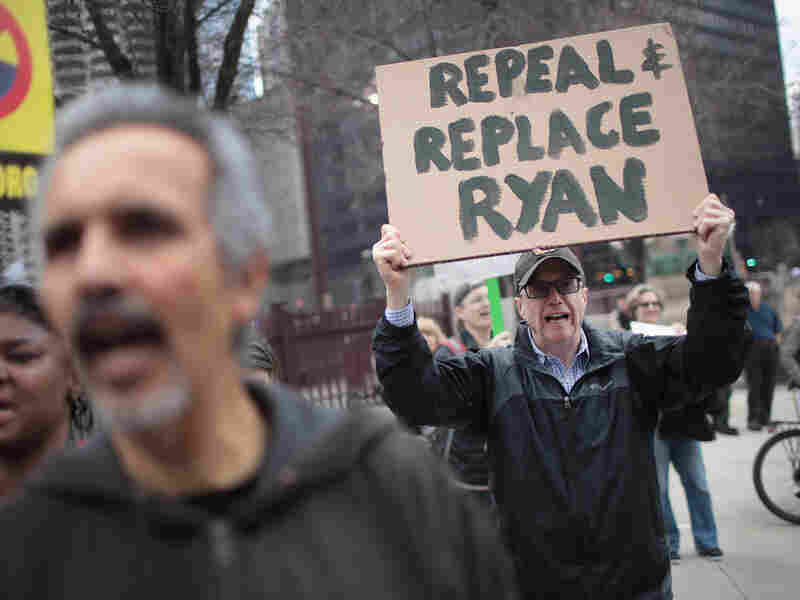 Demonstrators gather near Trump Tower after the defeat of the GOP health care plan. One man holds up a sign, urging the ouster of House Speaker Paul Ryan, who spearheaded the failed effort. Scott Olson/Getty Images hide caption 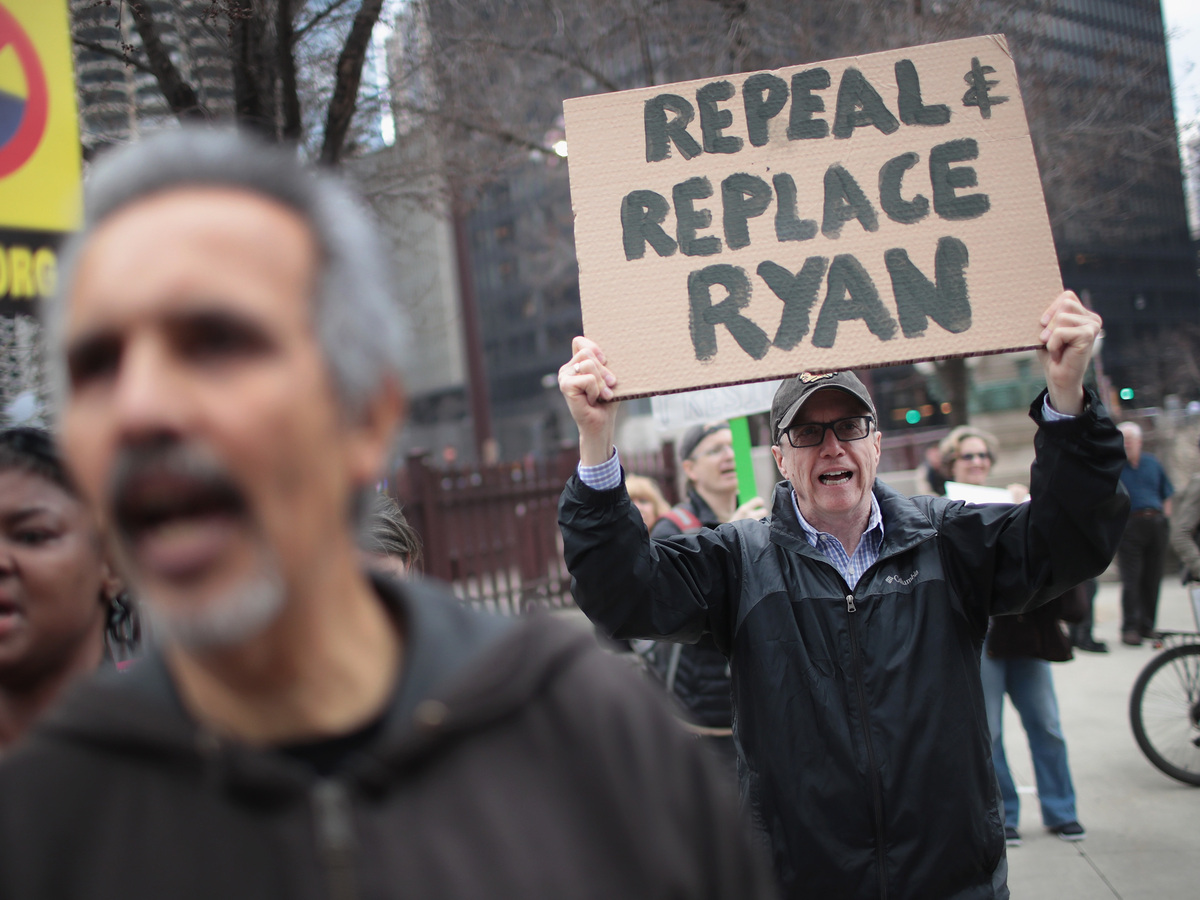 Demonstrators gather near Trump Tower after the defeat of the GOP health care plan. One man holds up a sign, urging the ouster of House Speaker Paul Ryan, who spearheaded the failed effort.

"I don't give a s*** what you guys think," Bannon reportedly told them, per CNN, in a meeting Thursday before the bill went down.

"Guys, look, this is not a discussion," Bannon said, per Axios. "This is not a debate. You have no choice but to vote for this bill."

Trump himself showed a level of impetuousness with the Freedom Caucus and a lack of policy understanding that eventually did him in.

"Forget about that little s***," Trump told the group Thursday, per Politico. "Let's focus on the big picture here."

That might be how campaigning works, but it's not how governing does. Sweating the little stuff is important when it comes to legislating. That's especially true for the big things Trump wants to tackle.

But, though Trump said he had "learned a lot" and wants to move on, he was looking backward over the weekend, tweeting blame at the Freedom Caucus — a group he underestimated:

Democrats are smiling in D.C. that the Freedom Caucus, with the help of Club For Growth and Heritage, have saved Planned Parenthood & Ocare!

It's a group that won't be intimidated by ultimatums or tweets. Current House Intelligence Committee chairman Devin Nunes of California once referred to the conservatives who became the Freedom Caucus as "lemmings with suicide vests."

Trump is going to have to figure out how to deal with them.

He also faced opposition from more moderate Republicans, like Rep. Charlie Dent of Pennsylvania, who were averse to the ramifications of the policy laid out in the GOP bill. Dent did not deny an exchange reported by Robert Draper in the New York Times Magazine, in which Trump said he was "destroying the Republican Party" and was going to be blamed for foiling tax reform by blocking the health care plan.

Part of Trump's "learning experience" was seeing how members of Congress may care more about what their constituents think than their president does. Trump may be the leader of the Republican Party, but he isn't its CEO.

Winning isn't everything, and the "little s***" matters

Trump likes to win. He told the country during the presidential campaign that we would all get so tired of winning under him that we would all be so bored. The Art of the Deal author hyped himself as the best dealmaker anyone's ever seen.

Instead, his first major effort at legislating handed him a stunning loss. It was a textbook chapter in how not to legislate.

Part of the problem is that Trump wanted a win on health care so badly that he may have been blinded by his willingness to take any win.

He outsourced the details to Ryan and others, and when it got difficult, Trump didn't have enough policy knowledge to close the deal.

"How he was dismissive of policy concerns, and instead focused on the big picture and big political issue, that is never going to get you a win when you're negotiating with Congress," Conant warned.

Health care affects one-sixth of the U.S. economy and includes lots of "little" things that are important to real people's lives.

Every year Medicaid expansion is limited or rolled back means potentially millions of people who don't have access to health care.

Every "essential health benefit" that's put on the chopping block, for, oh say, whether your insurance is required to cover emergency room visits, means potentially thousands of dollars in or out of constituents' and hospitals' pockets.

The "little" stuff is the important stuff.

Conservative writer Matt Lewis observed during the brief debate over the GOP health care bill how far it strayed from Trump's campaign platform. "He ran as a guy, 'I will solve your problems. I want to take care of everybody. Nobody's going to lose anything. Everybody's going to have the best health care.' This health care plan is off-brand for Donald Trump," Lewis told NPR's Mara Liasson.

An enduring problem for the president may be that his brand of populism doesn't necessarily match the small-government conservatism that defines the House GOP Conference.

Sure, Trump made the phone calls and lobbied wavering Republicans, but he grew impatient and frustrated. After less than three weeks, he issued an ultimatum to those hardline conservatives — he was done negotiating: vote for this bill, or Obamacare stays in place.

It was a big gamble, and he lost.

"Winning" isn't everything; it really is how you play the game in Washington that enables winning. And when it came to playing the legislative game, Trump's lack of attention to policy detail, impatience and cavalier impetuousness cost him.

"He should know, from being engaged in a lot of negotiations, if you're constantly looking over your shoulder and needing someone to fill in the details in the conversation sometimes that doesn't wear real well," the strategist said.

There's a reason it took former President Obama more than a year to pass the Affordable Care Act.

He knew the details, and was often the best — and only — salesperson for it. He took the show on the road and got into the nitty gritty.

Pete Souza, the former White House photographer, subtly made that point in a post on Instagram on Saturday:

President Obama working on his health care speech that he made to a Joint Session of Congress in September 2009, six months before the Affordable Care Act was voted on in Congress.

"Give credit where it's due, Obama was really good at that," the strategist said. "Obama was really good at working with individual members knowing the legislation as well or better than they did. They [the Trump White House] need to get to that level, or close to it, or there are going to be gross inefficiencies built in and opportunities that are lost."

That is going to have to include more coalition-building inside and outside the GOP conference, with outside conservative groups, as well as industry groups.

"He didn't spend much time or political capital to get this bill through," Conant said.

Conant also pointed out that part of the problem is a level of distrust within the White House for everyone in "the establishment" and anyone who hasn't been on Team Trump all along.

After A Wild Week, The House Trump-Russia Probe Endures — Barely

"There continue to be a lot of vacancies," Conant said, "and they have rejected a lot of people who have government experience because of loyalty tests from the campaign."

That eliminates a lot of professionals with experience on Capitol Hill.

If Trump doesn't start to focus on the details and become more invested in how government works — something he has always been loath to do — he should expect similar results.

"There's an eagerness on all sides to move on, to put this episode behind and move on to a new issue," Conant said. "But regardless of what issue we turn to next, Trump will likely run into the same internal GOP divisions and partisan opposition. To be a successful president, Trump will have to display skills that we have not yet seen from him.

"It will require humility, patience, outreach to opponents and the forging of consensus."