Accessibility links
Older Workers Find Age Discrimination Built Right Into Some Job Websites The sites screen out older job seekers by limiting the dates you can fill in forms, an investigation by the Illinois attorney general found. But other sites say they make a point of fairness. 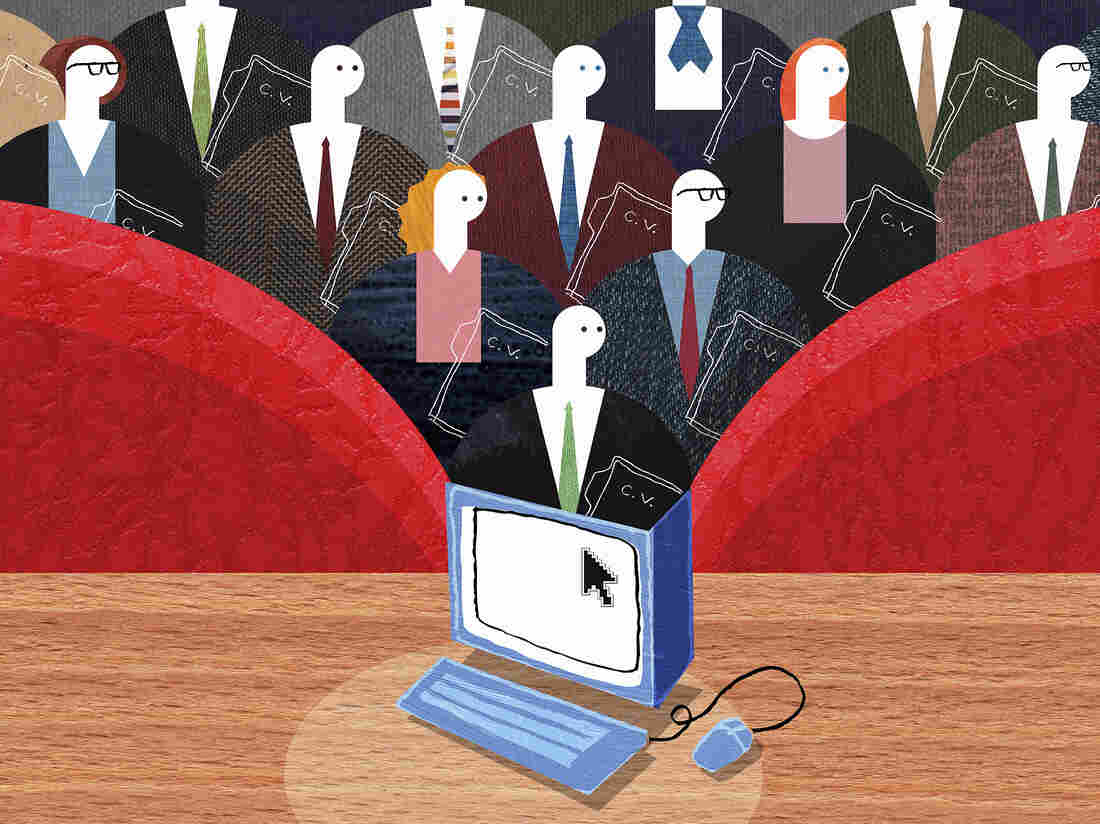 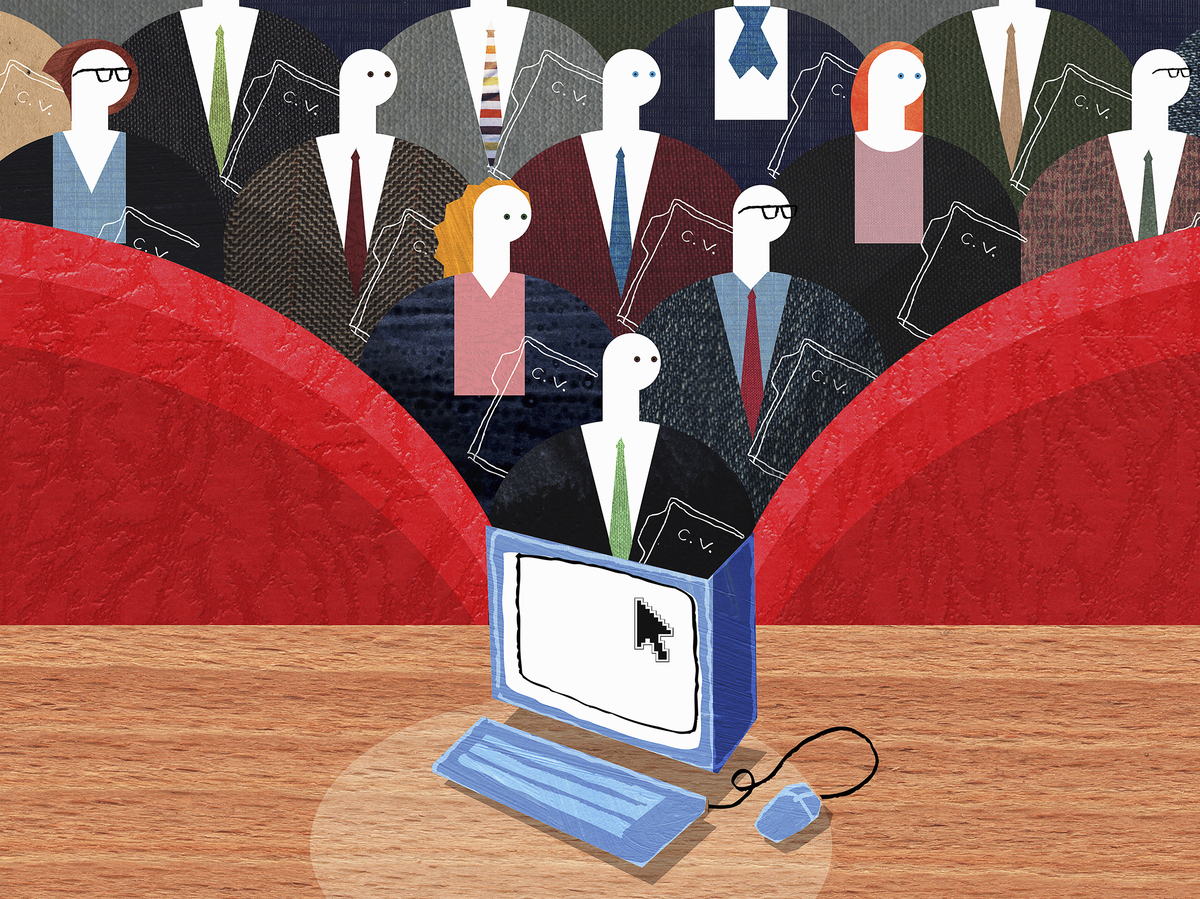 Older adults have been excluded from some websites that post jobs, according to Illinois Attorney General Lisa Madigan.

Illinois Attorney General Lisa Madigan opened an investigation after a 70-year-old man called her office and complained that he'd been unable to use a resume building tool on a job search site. (Read Madigan's letters requesting information from job website companies she's investigating.)

The problem was the drop-down menu that required you to select the year when you graduated or got your first job. Those dates only went back to 1980. Madigan's office contends that could exclude anyone over 52.

Madigan's office contacted Monster.com, Ladders Inc., Beyond.com, Indeed.com (an NPR funder), CareerBuilder and Vault. Their sites were less restrictive, but they all had their limits. Some only excluded people older than 82, but Madigan says that's still discrimination. The way these job search sites should work, she says, is that "anybody who's alive and wants to look for a job would be able to, and be able to put in accurate information."

Responding to NPR's request for comment, some of the job search sites said the date limit was inadvertent and that they have corrected it. Others wrote about special efforts they make to assist and advise older job hunters. Their full responses are at the end of this article.

Madigan also wants to see the companies' internal documents to see if the exclusions were deliberate or accidental. At this writing, she had received written responses from only Beyond and Indeed, but none of the documents requested.

Some organizations are trying to "fix the problem" in other ways. The AARP has an Employer Pledge Program, where companies promise equal opportunity for all workers and job seekers regardless of age.

Kerry Hannon is the AARP's work and jobs expert and the author of 10 books on work and finance in later life. She says that so many employees who are over 60 tell her that "they look across the table and there is this idea that the employer sees their expiration date." The Employer Pledge Program is important, she says, because "age discrimination is alive and well in the workplace" and AARP members want to know how they can avoid it.

There are also online job search sites specifically geared toward older workers. One of them, RetirementJobs.com, posts open positions at any company that wants to place a listing. But the site also certifies some employers as "age friendly." Tim Driver, the founder and CEO, says an employer is awarded that designation only after his staff investigates the company's practices and culture.

"There's over 100 big American employers now that have gone through the [age friendly] program," says Driver. Those include Fidelity and Wells Fargo and "even government organizations, like the TSA or the Veterans Administration."

But job-seekers don't have to take Driver's word for it. RetirementJobs.com is the only job search site for older workers that lets members post comments describing their experiences with specific companies, Yelp-style.

Driver says they've just started doing this in the past few months. "We wanted to know, are these companies truly walking the talk?" he says.

Well, not always. There are dozens of comments on the site about companies that force out older workers or exclude older job hunters in favor of "recent graduates." On the other hand there are also plenty of five-star reviews, most brimming with gratitude for companies that treat older workers with respect and don't hold their longer experience against them.

Below are responses from job search sites to NPR regarding the Illinois attorney general's investigation.

Monster does not have a comment regarding the Illinois Attorney General's investigation at this time.

CareerBuilder is committed to helping workers of all ages find job opportunities, and has fixed this unfortunate oversight.

Ladders has not received a letter from Illinois Attorney General Lisa Madigan to date, nor do we participate in these practices. Our site does not restrict the dates on resumes that people submit to us. In fact, to combat age discrimination we do not ask for a year of graduation from college. Our optional work experience section limits your experience to the past 50 years. We have spoken publically about this topic and feel very passionate about combatting age discrimination in the workforce. What we have shared with job seekers is our belief that to effectively market yourself it is best not to discuss work experience from more than twenty years ago. You can find that information here: https://www.theladders.com/p/12911/y2k-bug-resume

Age discrimination is a pervasive issue in the hiring process, especially now that many employees are retiring later or coming back to the work force later in life, and we have actively counseled job candidates of an older age to ensure they are positioning themselves in the best manner. It is commonly recognized in this industry that it's best to leave age references off of one's resume. Career advocates emphasize that employers are mainly interested in current experience, regardless of the age of the candidate. Experience older than 20 years is generally not considered relevant. Online resume-building tools that force applicants to enter years for degree programs or work experience allow an indirect method for an employer to gauge the age of the applicant. We take a tremendous amount of care to help our members and employers carefully consider all information they put forth during the job search process to avoid any conscious or unconscious bias. Thus, the dropdown fields for years of employment or education are optional in the Career Portfolio. Regardless, the member can include all dates they desire in their resume, which is uploaded to our site. The Career Portfolio is simply a free service to allow a member to publicly market themselves in a creative way through a url. It is not a primary way to find a job, nor does it replace a resume. After receiving the letter from the Illinois Attorney General, we have since changed the dropdown menu for education or employment dates to go back much further. This will hopefully satisfy the concern of the Illinois Attorney General that all job seekers will have the opportunity to offer this information to potential employers if they wish.

Indeed's mission is to help people get jobs, and we strongly believe that age should not be a factor in evaluation of employment. On Indeed, anyone can upload a resume with any dates, and users can create a resume with drop down dates that go back to 1900.

Indeed has always allowed people of all ages to search for jobs, create resumes, post resumes and apply for jobs through our site. Beyond being able to post a resume, our free resume creation product drop down menu went back to 1956. This did not prevent anyone from manually noting an earlier date on a resume, but we did extend that menu to 1900 after hearing of the concern in the letter.

An earlier web version of this story mistakenly indicated that the case that spurred the Illinois attorney general to action involved Monster.com. The case involved ItsMyCareer.com, which dropped its resume-building feature.